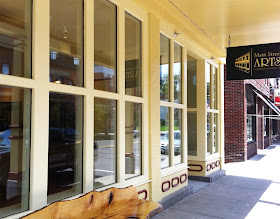 Off exit 43 on the Thruway I came across a pretty town, Clifton Springs,  with a newly restored building housing a gallery called Main Street Arts that recently launched on its maiden voyage.  "Locality" is the title of its opening show with more than 30 artists participating on two floors.  This inviting space is airy, has good lighting and is being manned by a former R.I.T. graduate: Bradley Butler - who is also an exhibiting painter. 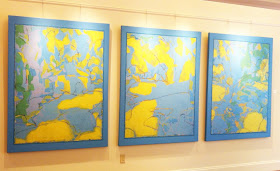 Putting a new gallery together from scratch in a town like Clifton Springs is a vote of affirmation in the life of the arts for this region, and while I was there I had a chance to see works by artists I know, like Lanna Pejovic and Kathy Calderwood, as well as many others I have not met before.  New life is coming to towns as people re-invest in their properties and in the arts which will stimulate tourism. 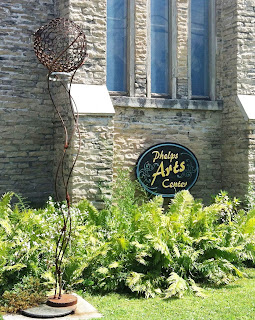 This weekend I was doing my part by spending some time in galleries and tasting some wines along the trail in the Finger Lakes.  Down the road a few miles I drove to the Phelps Art Center, where I found balloon constructions honoring Fragonard under construction by Airigami, and also the world's record holder for toothpick construction - towering skyscrapers of toothpick art (or is that obsession?). 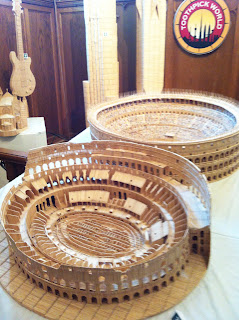 I frequently stop into see the Herbert F. Johnson Musuem on the Cornell University campus, and a new show has just opened that highlights the effect that Japanese art - specifically woodblock prints - has had on European and American design.  In a vitrine in the Johnson Museum show there is a set of the original woodblocks used by Hokusai, the world class Japanese artist from the 19th century, and you could see the direct ( and indirect ) influence that his work has had on artists like Arthur Wesley Dow ( the teacher of Georgia O'Keeffe ) and on designers like William Bradley. 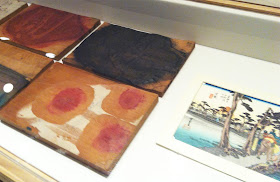 Upstairs at The Johnson Museum is a picture window that looks out at the extent of Lake Cayuga in the distance, and there on the fifth  floor you are surrounded by Asian art of diverse kinds.  I was attracted to the architectural baskets, and ceramic art and calligraphy.  Downstairs, a wonderful sculpture by Giacometti dominates the European art galleries. 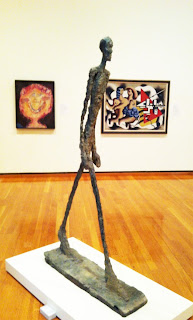 Alberto Giacometti,
with Dubuffet and Leger in the background

On the way home I take a look at the waterfalls - Ithaca is Gorges after all. 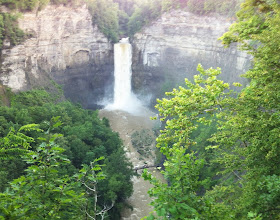