The Artist and the Astrophysicist 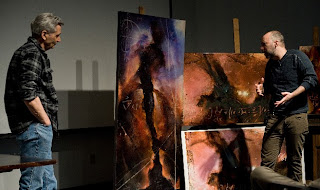 photo by
Sue Weisler
R.I.T. photographer
at an illustrated talk by Steve Carpenter
on the left and Adam Frank on the right


With artwork, an interesting question arises about collaborations - who gets to sign the work?
There are historical precedents to consider, and the business of giving credit where credit is due has to be addressed.  How do you determine whose contributions you are looking at?

Sometimes more than one artist signs the work, and in contemporary art we are seeing many more collaborations.  In the past we had the products of the atelier system, master artists then had the services of students and assistants who brought the art to life.  In this system we only knew who these assistants were if they went on to make a name for themselves later for their own artwork.

In the 1970's and1980's I worked as an artist with my father, Arthur Singer, on images that often found their way into publications - either books, collectibles, and even postage stamps.  Whenever possible, we both signed the actual artwork.

Controversy surrounds some collaborations - witness a court case mentioned in a recent New York Review of Books over the validity of an Andy Warhol silkscreen work.  Determining what is an authentic print can involve a lot of detective work, - but is a collaborative work somehow less original?  Does it matter that the Warhol Factory made the print and the artist signed the image?  Hasn't that process been part of the artworld for decades?

Our understanding of what the practice of fine art really is - changes and expands like the universe that astrophysicist Adam Frank talked so passionately about.  He came to R.I.T. to give an illustrated talk with painter, Steve Carpenter late in March.  When they speak about deep space and star formation, they talk about a creative process, full of light, violence, and extreme beauty.  This was a collaborative venture between the artist and the scientist - to try to find and touch the reality of these grand events and see some reflection of humanity and how we are a part of this astonishing array.  Paintings start as printing on canvas,  employing yet another artist - Tony Dungan - to make digital files that develop a foundation that will accept  thick paint.  Equations try to give  mathematical explanations for the phenomena of star formation.  The equations are etched like hieroglyphs in the paintings and only hint at the intellect at work trying to decipher distant hot spots in the universe.

Collaboration in the visual arts was unusual, if it fought with expectations of the solitary figure at work - alone in a studio creating work of value.  I think we are beginning to see a greater emphasis and resonance with ideas that are brought about by collective spirit, and aggregate talents. 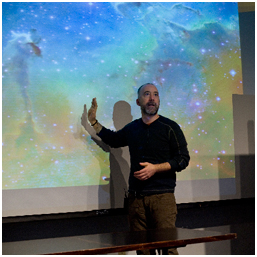 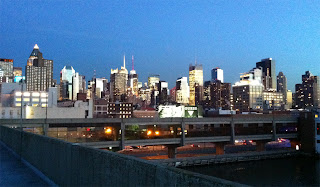 Skyline from Pier 92
by Anna Sears


For artists, a shakeout is underway.  This screening process determines whether you have a network that will sustain you - or sidetracks you if you've set unreasonable goals that can't be maintained.  A recession tests your mettle.  Most of the artwork from artists that we know comes from a broad middle class (raised with ambitions and aspirations) - but will that demographic cohort be able to ride out the slow times ahead? We worry that the visual artworld has become complacent, and conservative.  A case could be made that the Armory Show which we visited this week fell flat even though many of the old stalwarts lined the miles of booths along Pier 92  and Pier 94 in Manhattan.

We really paid attention to everything - looking for some rewards in and among the newcomers from
Europe, Africa, Asia, and South America.  One goes to the Armory Show to catch up to what is happening around the globe, and this year a lot of minor art failed to grab me or make an impression.

Maybe the dealers were playing it safe, or maybe it was the cold pristine weather outside, but the crowd was thin on the Modern side of the Armory Show.  Small paintings from a 35 year old Brit named William Daniels caught my eye. The two on view vibrated with delicious color and buoyancy.  John Walker had a large collection of small paintings from the "Harrington Road Series" - a real temptation to buy #52-54 but I couldn't scrounge up the $28K. 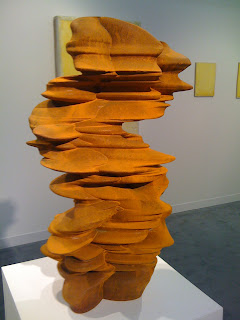 There seemed to be many Tony Cragg amalgamations which come in many materials ( the one above in a rustyish color had some appeal ) but even here, this art seems to be repeating itself.  Hybrid artforms like the constructions by Zach Harris at the Meulensteen booth holds some promise for the future. 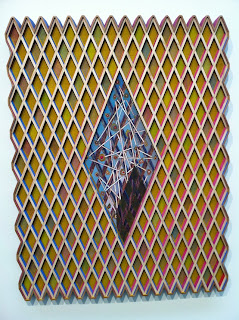 As in past years, you might have stopped to look at the metallic wall hangings from El Anatsui, a sculptor born in Ghana - who now has an international following.  His work, made from pieces of tin cans and bottle caps is seductive and flows like satin curtains of red and gold.  The handiwork is obsessive and unusual and makes a case for recycling!

At the end of a long row, in a quiet space, the work from Egyptian born Susan Hefuna glowed.  Her simple geometries were moving, as were her methods of using translucent tracing paper.  This work which is very architectural exists in the same spaces that Julie Mehretu seems to inhabit- manifest layers of linearity conjure up mental structures; and suitable spaces for art.

There was a lot less photography of any consequence this year.  I was amused by James Casebere's upscale model homes, and there was a dynamic large leaf from the Starn Twins, but I found a gallery of real flowering trees more attractive.  And what was that neon fence about?  As with the show last year, Pierogi of Brookyln featured a Patrick Jacobs mini diorama made with unworldly skill and amazing patience.

But we had to move on, and get up to New England.  Foster + Partners designed and built a new world for the MFA in Boston, and this is a much needed revitalization for a grand old museum.  You can still seek out your favorite Winslow Homer painting, or troll for beauties among the Hudson River School, but my favorite works in Boston came from the Near and Far East.  Japanese prints make up part of my personal collection, so I like to see what is on view in the special exhibition titled " Flowers and Festivals".  I was knocked out by a Kuniyoshi diptych showing a tree grafted with 100 varieties of chrysanthemums -all in bloom - from 1843.  This is a form of horticultural prowess that is truly spectacular!

Also on view were Japanese baskets - the likes of which you have never seen - to delight the eye.  From Turkey I was pleased to see the Iznik tiles and bowls and my curiosity was piqued by Qajar metalwork from 19th century Iran.

Many parts of Boston's Museum of Fine Art were still under construction, so we didn't get the full impact of what they had to offer.  Stopping for a cup of tea on the main level, we relax in a spacious, comfortable meeting area under skylights that let in afternoon rays which we soak up before we hit the road. 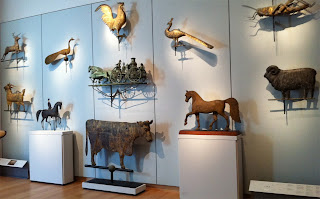 Weather vanes at MFA
photo by Anna Sears
Posted by Alan Singer at 10:06 AM