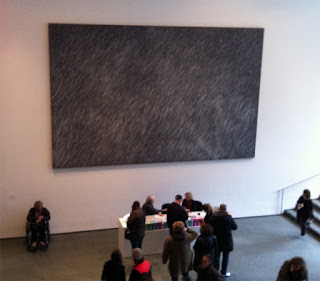 Thanksgiving car traffic going into New York City is world class, and so it seems that all those people on the road were going to the Museum of Modern Art (MOMA) - just when we wanted to.  So we waited in line outside on a brisk day in Manhattan for the privilege of getting into the building to be able to wait in line to buy a ticket.  Then we waited in line to hang up our coats and before you knew it two hours had passed and the only art we glimpsed was a titanic sized Cy Twombly in the entry.  I felt a heavy dose of dread in the bus station that was the MOMA that day.  How did they ever spend so much money to get so little by way of public amenities for the museum-goer?  We look in vain for a place to sit after waiting in line so long.

I only glance at the Diego Rivera mural on the way up to the sixth floor to see the retrospective of Willem DeKooning.  The Rivera dovetails nicely with the social consciousness of the early DeKooning "portraits" of everyman, often dressed in ill-fitting clothes staring with distant looking eyes.  I like the cool declaration of Elaine DeKooning drawn to icy perfection in a near-Ingres like graphite drawing near the entrance of the show.  I went to see early DeKooning - before he commenced with his signature works.  I was curious to see what revelations could be found in the earliest paintings.  Could you really tell what he would become from the start?

The answer is yes, but you really must pay attention.  Even though DeKooning would try a variety of strategies to derail his natural dexterity ( he draws sometimes with his eyes closed, or while watching television ) his artwork is all about the hand and the marks it makes.  DeKooning's art has little in the way of narrative, unless you think of the story being told is an analysis of the artist's nervous system with all its characteristic ticks, jumps and jots.

In 1939 abstraction followed on the heels of the portraits, and the jump may have been precipitated by DeKooning's interaction with painters Arshile Gorky and Stuart Davis, both of whom were working on organic or biomorphic forms in their influential art.

DeKooning spends part of the late 1940's teaching at the progressive Black Mountain College in Asheville, North Carolina.  Tucked into the hill country of western North Carolina, Black Mountain would prove to be the spawning ground for a truly modern art movement that had far reaching effect in American cultural history.  Although DeKooning was there for only a short while, something happened to his paintings that brought all of his energy together with a deep gravitas that still looks terrific today.

Paintings on canvas in black and white enamel may have been my favorite things among the early work in the show.  For two or three years, DeKooning made the most of limited color, attached to severe shapes that knit together "Painting", and "Dark Pond", "Attic" from 1949, and "Excavation" from 1950. An instructive collage nearby was put together with cut out shapes and thumbtacks, and one can guess that this process helped hone the consummate draftsmanship that enables the artist to be so convincing.
Posted by Alan Singer at 5:47 PM 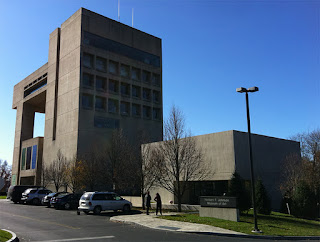 The Johnson Museum
on the Cornell University campus
early November, 2011


I drive down along Lake Cayuga during the day in early November thinking that I have never seen the water look so blue!  So, like a tourist, I pull over to take a picture - this kind of marvel has been going on since I moved upstate from New York City.  Back in Manhattan there didn't seem to be any distinct seasons, you would just notice that it gets warmer in the summer.  For a few years in Brooklyn, I had a painting studio with no natural light, and I began to yearn for daylight.  I wanted to have those large picture windows that my neighbor Alex Grey had for his studio space.

So what a joy it is to be on my way down to an opening at The Ink Shop, a cooperative printmaking space on State Street in downtown Ithaca, NY.  The show, opening on the first Friday in November is titled " In Tents" - and represents seven printmakers who show their art at outdoor art fairs around the country - they travel a circuit setting up a booth to sell their prints.

The artists, Ann Eldridge, Johanna Mueller, Christopher Plumber, Jenny Pope, Daryl Storrs, Marina Terauds and Heinrich Toh make a pleasant company and their work has a broad appeal.  Many of these names were new to me, and I found the monoprints of Heinrich Toh to be very intriguing - incorporating hand drawing, photo, and decorative digital elements along with lots of color and space.

Later, I went up the hill to the Johnson Museum on the Cornell University campus to view the new addition and I really enjoyed the visit.  The Johnson Museum collections have been moved around making a new open storage study gallery where you can view anything from a suit of armor, to pre-columbian pottery.  The opening of a new addition a few weeks ago adds levels underground, as well as a mini Japanese garden replete with moss and stones and gardeners at work. 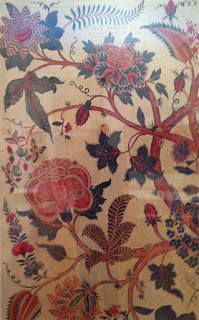 
Inside the Johnson Museum I found a cross section of Indian Textile art in an exhibition called "Essence of Indian Textiles" from the Parpia Collection.  Here you find the origins of  Chintz fabrics in the marvelous Palampore which usually portrays a magical flowering plant that the Indian artisans made for export.  Indian textiles defined deluxe in the 17th and 18th centuries.  Today, we look at the rich colors of their carpets, wall hangings, and even the common Banjara folk arts and we are moved by their sense of detail, high level of design and terrific craft.
Posted by Alan Singer at 3:38 PM