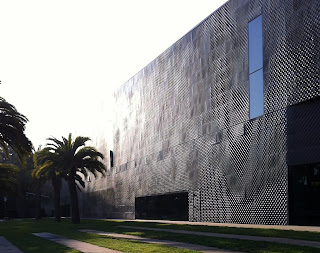 
San Francisco is a city with charm; it's a cultural oasis.  Our last time here,  we wanted to visit the de Young Museum but it was under construction.  Upon my return a few days ago, I was pleasantly surprised by the new building with its pointilist copper facade designed by the team of Herzog and de Meuron. About the only thing that remains of the previous incarnation of the de Young Museum are the old palm trees.  Now there is a large outdoor cafe with a giant bobby pin (pop sculpture) and indoors there was an opulent traveling exhibition of Venetian painting from the Kunsthistorisches Museum in Vienna as well as a historical overview of Anatolian Kilims.

On top of the educational tower is a ninth floor observatory with panoramic views of the city.  A wonderful place to stop and take in the scene.  People reach for their cameras and snap away, and I did too. You can see up the coast to the Golden Gate Bridge and beyond, when it is sunny and clear - not always possible on a point of land frequently fog-bound. 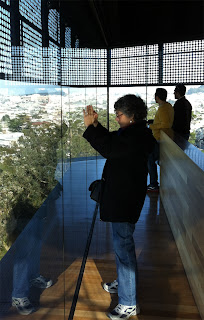 The lower level is entered by a long gently sloping staircase.
At the entrance to the  show of Venetian painting the gallery visitor finds mural size images of San Marco as well as photos from the Kunsthistorisches Museum.  Among the first paintings we encountered was a portrait of St. Sebastian by Mantegna.  This iconic painting was amazing in detail, and moving by way of the passion and pain it portrays.  Mantegna and Giotto were pivotal figures bringing perspective to spatial arrangement in two dimensional art, and the St. Sebastian portrays this new found structure.


Around the corner in the next gallery we come upon a trove of paintings by Titian, which are so sumptuous and mysterious at the same time.  I try to fathom the personalities portrayed, as Titian paints  in such a way as to reveal his subject's very nature.  A great colorist, Titian follows in the footsteps of Giorgione who also has paintings on view in this exhibition.  Old favorites are here including Titian's
"Danae" and the shower of gold, and another one of Titian's last paintings which is much rougher in texture and darker in temperament. 
We enjoyed Tintoretto, and Veronese also in this show.  Tintoretto's Susanna ( and the elders) presages Manet, and the arrangement of bodies in space still seems so odd and staged to me.  The impression left from visiting this show is one of grand opera and drama, an archaic  and poetic realm full of human foibles and longings.
Posted by Alan Singer at 10:44 AM 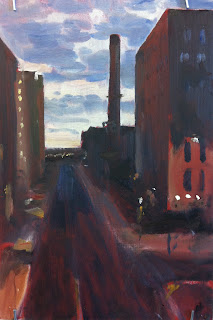 
Jim Mott is the itinerant painter traveling around the countryside bartering his talents and creating his life's work.  Years ago, when I first met the artist, he had just come back from painting outdoors and I looked over his small plein air panel paintings ( which I just couldn't resist).  Jim's project is to travel and paint what he sees.  He has been around the United States, and even ended up as a subject for a "Today Show" broadcast featuring him scouting out locations and doing what he does best: landscape painting.

The Center at High Falls is hosting a selection of his panel paintings made on Jim's most recent excursions around the Inner Loop here in Rochester, and out in the suburbs.  He and I share many interests including looking for birds, painting from nature, and making observations along the highways and byways if one has the time and the inclination.

Jim is not afraid to paint outside on the snowy days as well as the balmy afternoons, and his postcard sized paintings create mini-environments and containers of light that are very convincing, but not labored.  When the paintings are at their best, they have a guileless approach to matter-of-fact realism that reminds me of the late Fairfield Porter, and the panoramas of Rackstraw Downes.

In order to fulfill his vision, Jim reaches out to people who will let him spend a few days and nights at their home; he finds the challenge of painting in a new neighborhood that is fresh to his eye.  In return for room and board, Jim leaves his hosts a signed original painting, - and then it is back to the road for his next engagement with the land.  Is this a kind of Johnny Appleseed complex?

In a way,  this is a grassroots activist at work - returning to the landscape that has nourished us, and by calling our attention to the surrounding beauty ( and which we oftentimes fail to acknowledge ) we are nudged towards responsible stewardship of our country and countryside.

But Jim is not all birds and flowers;  in fact some of my favorite images in the present show are of Rochester's landmark factories, signs and symbols, including the Little Theatre marquee, and the Rochester Art Supply store.
Posted by Alan Singer at 2:05 PM