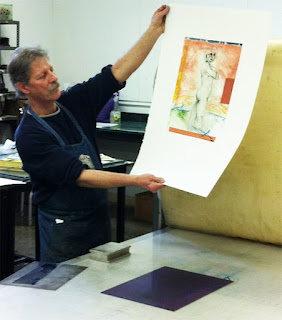 Printmaker,
Ron Pokrasso at Rochester Institute of Technology
making a demonstration print for the Print Club

There is something very satisfying about watching a seasoned professional printmaker hand pulling a print and then presenting this work to admirers.  Hot off the press, you watch the creative process unfold and begin to understand something about the nervous system and personal aesthetic of the artist in the spotlight.  Ron Pokrasso's art is (employing basic crafty building blocks) very much like jazz - a set of improvisations that have been practiced from a variety of angles.  When you visit the exhibition  ( part of a series called "Makers & Mentors" ) now through March 18th at the Rochester Contemporary Art Center, you will see prints by Pokrasso, and paintings by Robert Marx, and David Bumbeck.

Bumbeck, now in his 70's seems to be a surrealist - achieving very odd juxtapositions in the collage paintings he has hanging on the walls in this exhibition, and these works require more than one look to see the archival images mixing with the hand painted ones.

Robert Ernst Marx sits squarely in a tradition of socially conscious artists such as Ben Shahn and Mauricio Lasansky ( with touches of early Francis Bacon peeking around the edges).  Marx has been an influential teacher known for his prints ( and his long association with SUNY Brockport ) showing his work widely to much acclaim.

In this western New York region, many working artists have become celebrated teachers in the visual arts and we can see their effect on students ( hopefully providing some inspiration and practical advice along the way).  Teaching in colleges and universities has become a respectable method of making a paycheck when sales of art lag as in this recession we are living through.

Sometimes teachers can have a profound impact on the direction taken by their students.  Maybe it was timing, and the conditions warranted it, but Keith Howard at R.I.T. has started numbers of his students down a path of non-toxic printmaking.  Keith came to R.I.T. at a time when the printmaking program was being threatened and through his hard work gradually turned it around.  Non-Toxic printmaking represents a change in attitude on the part of artists who wish to use materials that won't kill them while they are in the process of making their art.  With the change of materials used in the studio - the look of the prints changed too.  Couple that with the use of the computer as a studio tool, and you have a real revolution.

I was able to capitalize on this new direction in a show I have curated for the Ink Shop in Ithaca, NY.  Not only do I feature non-toxic printmaking in my show called "Process and Purpose", but I also make a point of demonstrating how a process effects the look of these prints.  The artist becomes an inventor - creating tools and methods that will ultimately create exciting prints for collectors and the public.  "Process   and Purpose" highlights a number of artists who teach from our area including Nick Ruth from Hobart William & Smith College, Ron Netsky from Nazareth College, Keith Howard, Bernice Cross and myself from Rochester Institute of Technology - and I even introduce one of my students - Charlie Campbell - in this show.

"Process and Purpose" has over thirty-five works by other artists such as Dan Welden who has travelled worldwide demonstrating his Solarplates.  These printing plates are light sensitive and can be "developed" using sunlight and water - very environmentally conscious - and then printed like a traditionally inked intaglio plate.  When I asked Dan Welden who he has made prints for in his studio he gave me this information: " I worked with many artists over the years, including your father ( Arthur Singer ).  Most of the earlier works involved printing with Tatyana Grosman when I printed for Rauschenberg, Motherwell, Dine, Johns and Larry Rivers.  I collaborated with Willem and Elaine DeKooning, Dan Flavin, Eric Fischl, Lynda Benglis, David Salle and a whole bunch of others.... and I still do an outside edition when asked."

If you are in the Ithaca area, stop in to see my show which will be up until March 31st, or come by for my talk about the exhibition on February 23rd at six in the evening.  You can also e-mail me for further information regarding "Process and Purpose" at The Ink Shop: alan@singerarts.com 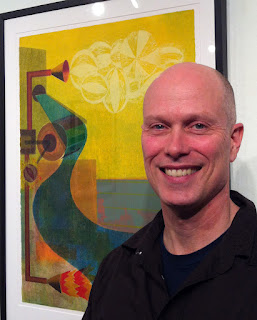 Printmaker,  Nick Ruth
at the Ink Shop in "Process and Purpose"
Ithaca, NY
Posted by Alan Singer at 6:15 PM