I'm down the road in Baltimore participating in "Bridges" an exhibition and conference that attempts to cross the divide that exists for some people,  between the practice of art and the application of math. This is one in a series of exhibitions that allows an affinity group to show their latest work in a juried setting, and publish a catalog of the result.  I was a bit nervous about the prospect of having my artwork
in this show, first of all - because I am not a dedicated mathematician, and second of all I don't particularly like the idea of having my art pigeonholed.

I used to think that math and art were on different sides of the same coin, now sometimes I think they are part of the same continuum.  I came out of a fine art tradition that owes a lot- to a more emotional bond in visual art, and less of a rational, structured approach.  But then I really like the art of Sol Lewitt for example, and I can't think of a more reasoned, analytical kind of statement than his work - maybe with the exception of Mondrian.  I like the minimal aesthetic,- there is something so Zen-like in the hit you get from a Sol Lewitt painting, print or wall work. But alas, Sol's artwork is not in this show.

My interest also remains with an art that is unpredictable, that shows you something you have not seen before, with a depth and clarity that real art contains, and has you coming back for more.  In my own art practice I have added the use of imagery that is derived from the visualization of algebraic equations.
Sounds pretty dry, but in the right combinations, I get what I want from a new composition.  But will it always be thus?

At Towson University, "Bridges" - the exhibition - can be found in the University Gallery, and it is a mixed affair.  There is a lot of repetition within the show, and that is probably true for many large art shows, but seems to be a weakness here.  Does the art go beyond the expression of a formula?
Does the art grasp your attention because it offers something beyond the craft of making a precise object?  Is symmetry always necessary?  Like making a catalog of snowflakes - too much of a good thing may stifle your ambitions for an art that goes beyond.

As I look over this large exhibition space a few works speak to me, including some cut out circles of mylar in layers by Rebecca Kamen, also beautiful mahogany knots by Bjarne Jesperson, David Chappell's "Meander" ( digital prints were all over this show ), and Susan Happersett's "Fibonacci Staircase", which is a scroll in the form of an artist's book.

I would love to see an image with as much power as Durer's engraving "Melancolia" of 1514 - so for "Bridges" I take away a feeling of an art that needs more metaphor to survive, some further relationships in the art need to be developed.  Most of the work is too solitary -too insular - not much humor or room for the errant splash!
Posted by Alan Singer at 7:04 AM 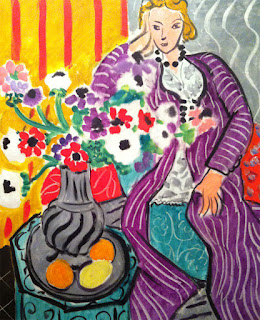 Purple Robe and
Anemones, 1937 -
A late Matisse oil on canvas
from the Cone Collection
Baltimore Museum of Art


Just the fact alone that I could park on the street right across from the museum entrance warmed my heart, and I hadn't even gone into the museum yet.  Anything that makes a museum visit easier helps, especially because I want to pay attention to the art and not be annoyed by the ambience.  Top it off with no admission fee, and I'm in like Flynn.

Then there is the Cone Collection, ravishing Matisse paintings, and much more.  Above is one of those disarmingly nonchalant ladies that Henri Matisse loved to paint in his apartments along the French Riviera.  Matisse makes the painting look like an improvisation, but really it is the result of a lot of practice, and you can see in the collection some works that are not nearly as effortless ( or
seemingly so ).  Matisse's subject is conventional - a clothed portrait, a vase of flowers and a patterned wallpaper, but he makes it look so easy and it never becomes trite.

Another wonderful portrait was found elsewhere in the museum, and that was of a woman playing a game called "Knucklebones", in a painting by Chardin.  The painting shows evidence of having been framed as an oval, and that mars the surface of an otherwise magical mastery of light playing off the face of a woman in a blue apron. 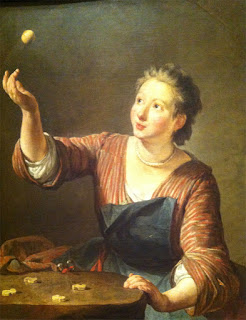 The Baltimore Museum is undergoing some renovations and the contemporary art wing will re-open in November.  In the meantime a temporary exhibition honored the Sondheim prize winners so if you were curious you could see what is happening on the local art scene here in Baltimore..  I was more interested in looking into the period rooms in an otherwise uninhabited area of the BMA.  The collections also have some early 20th Century works by artists like Leger which I found of interest.
Perhaps on the way out you might get stopped by a sculpted man being swallowed by a big fish from the Pacific island of New Ireland. 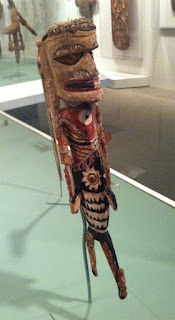