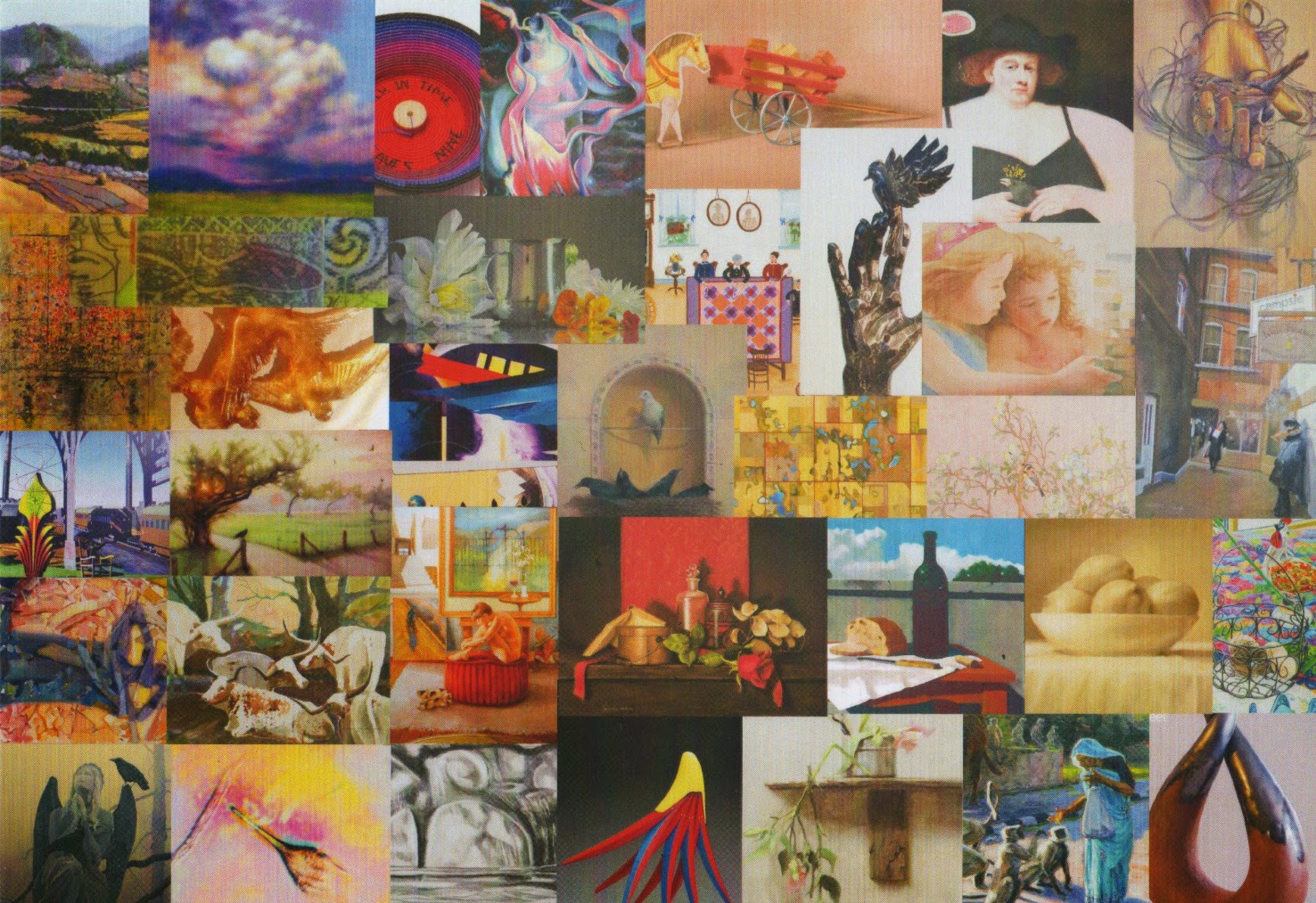 At the Oxford Gallery
thru June 14th,
"Proverbs and Commonplaces"

Jim Hall, owner of the Oxford Gallery, has fun dreaming up themes for his invitational shows and they attract attention and admiration when you see what the artists come up with each spring.  I was pleased to be asked to show a work, and so I made it over to the busy opening to see what the other artists had done.

First, when you walk in - pick up an exhibition list - so you can try and guess the meaning of what each artist portrays in this show titled         " Proverbs and Commonplaces ".  Each artist found a saying to translate via their own vision for an artwork that harkens back to a very old tradition - the literary arts are transformed into the visual arts, and the challenge is how to do this without being just a coy illustration.

"The Cart Before The Horse" by Carolyn Edlund

Right by the office look for Carolyn Edlund's painting.  One of the most interesting works is the imaginative "The Cart Before The Horse" which is so modest yet beautifully realized and I was surprised that it hadn't been sold yet.

Walking into the gallery you are greeted by a work from Ray Easton where he has paired a sculpture of an angel in a park setting with some visiting crows and a dove ("Birds of a Feather").  Ray's painting in acrylic reminds me of a cover for the New Yorker magazine.  Turn around to see a wild two part painting by Amy McLaren ("Parents for Sale -Insanity is Inherited") in her painterly figurative style.

There are so many approaches to painting ( and sculpting ) these proverbs and sayings that it is an education just to take a close look at the length and breadth of this show.  There is a rugged collage by Edie Shedden("What Goes Around, Comes Around") right near to an elegant print honoring the four seasons by Kristine Bouyoucos. 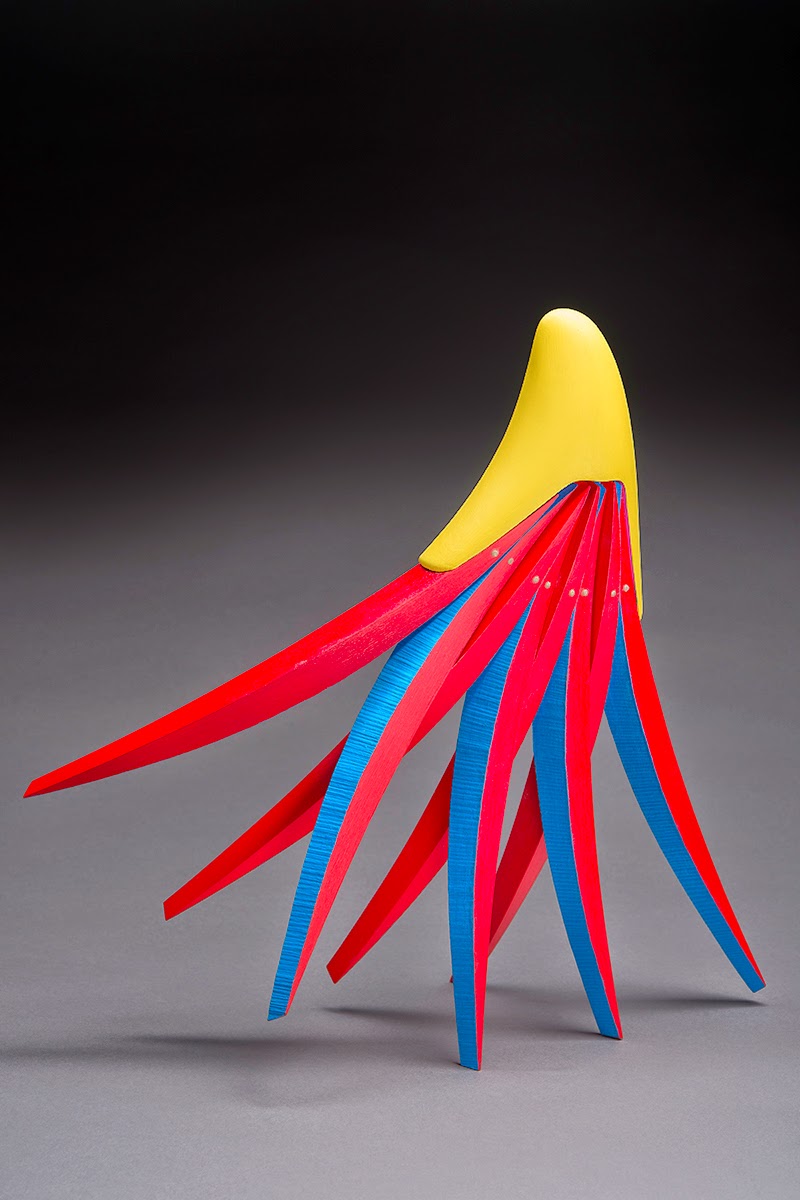 "Learn To Walk Before You Run"
by Bill Keyser

Towards the back of the show a brilliant little sculpture by Bill Keyser ( "Learn To Walk Before You Run" ) just skips along in its fire engine red paint.  I was surprised to see how similar his sculptural work was to part of my print which I call "Saving The Best For Last".

In the style of Janet Fish, was a big painting titled " Don't Put All Your Eggs In One Basket" by painter Kate Timm.  Kate's style is a careful realism that strives to be objective, as does a horizontal painting of flowers surrounding a silver cup by David Dorsey titled " Carpe Diem, Autumn's Last Flowers".

On the back wall I also found Bill Santelli's abstract acrylic painting "I Dream My Painting and I Paint My Dream" - very provocative and his phrase really gets inside your head.... 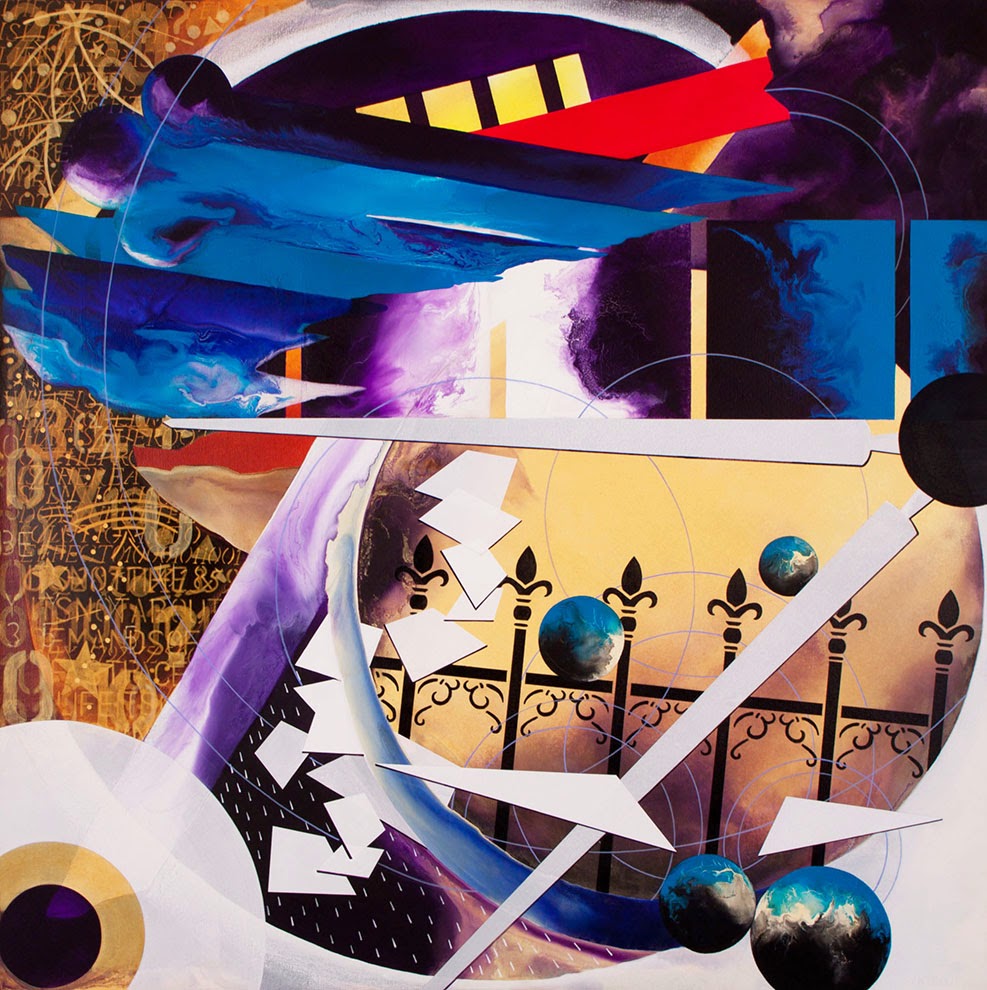 "I Dream My Painting and I Paint My Dream"
by Bill Santelli
Posted by Alan Singer at 4:55 PM 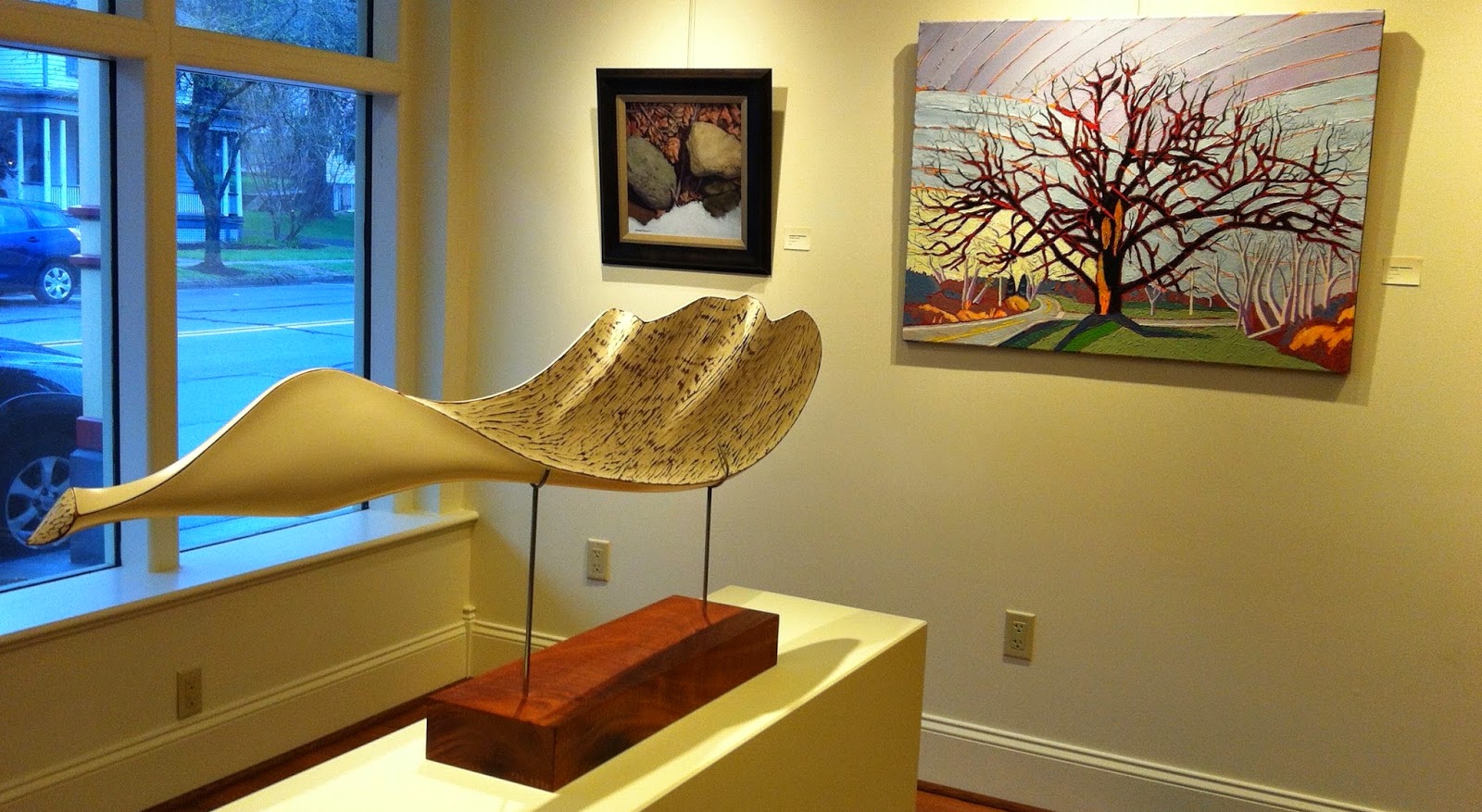 I attended another packed opening at Main Street Arts in Clifton Springs, about 35 minutes away from downtown Rochester.  "FLORA" contains over fifty works which I selected as the juror for the show and I was very pleased by the way it looks.  You never know how things will fit in a gallery space especially since I juried the show by slides in a Powerpoint presentation.  So to see the actual art is so much better, plus I get to meet the artists and ask them questions about their procedures. 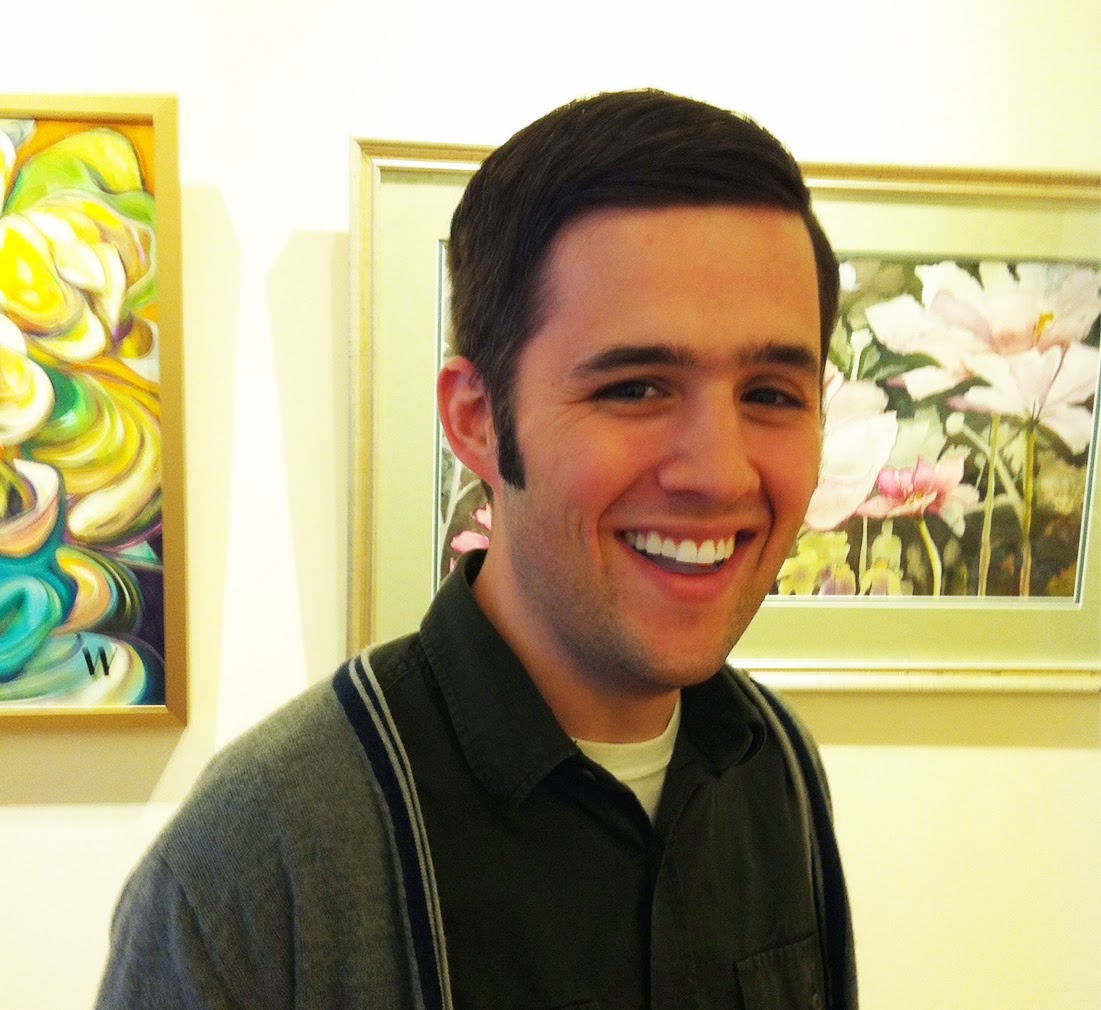 I had the chance to speak with Brad Butler who is the gallery director, an active artist and RIT graduate. He had arranged the artworks with an eye for making a statement about color and also about detail.  "FLORA" covers a lot of ground ( pun intended ) and I was pleased that he choose to include a couple of my watercolors as well.

Some standout works were in the show, and at the top of my list was a wood carving with milk paint called "Samara",  (see below) which was my choice for Best in Show for Patrick Kana.  Two other works won awards, a detailed rendering of a Delphinium by Margaret Wilson, and a work in ceramics. 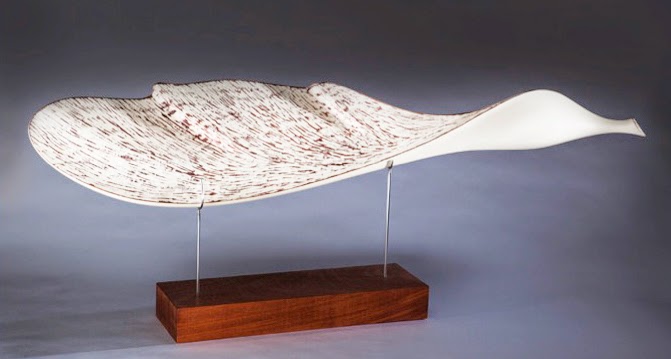 In the last few days I have also mounted a show in the Jean Geisel Gallery at the Bausch & Lomb Building in downtown Rochester.  My show is called " Early Work" and I wrote about this point in my career in an earlier post.  You are free to come and visit the show and take a look at paintings and prints that were made between 1988 and 2005.  In these works you will see the effect that working on a computer has had on my visual art.  This work represents a critical juncture for me, all the work is abstract and primarily about the effects of color and form. 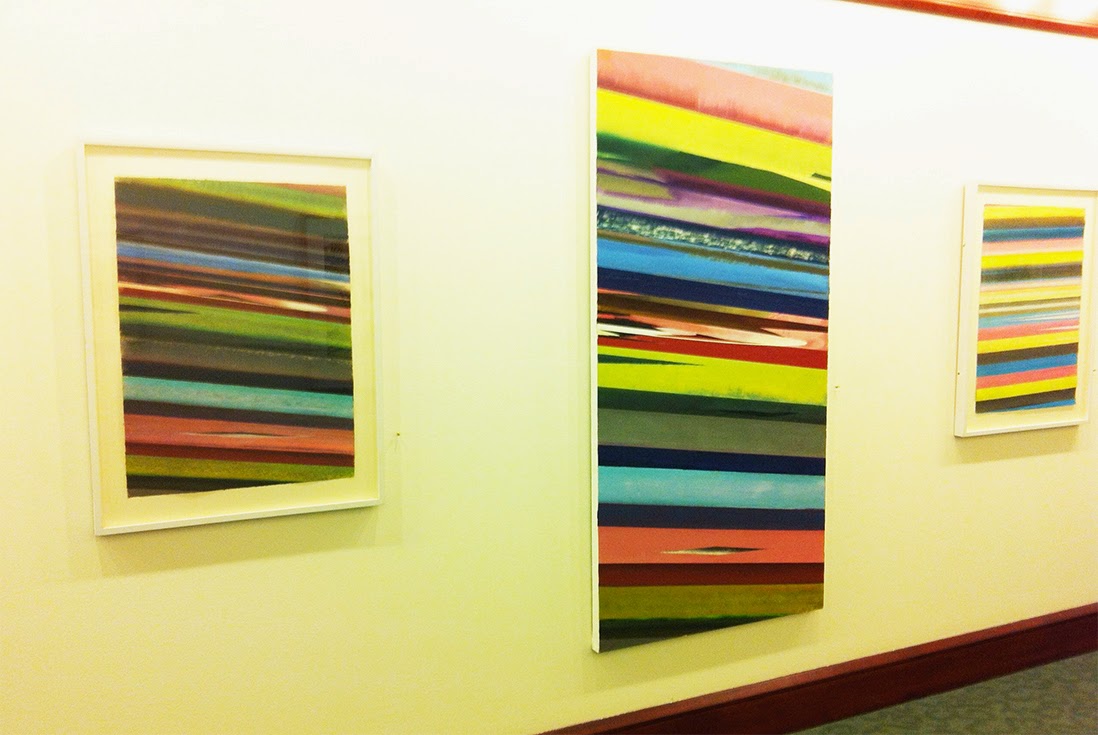 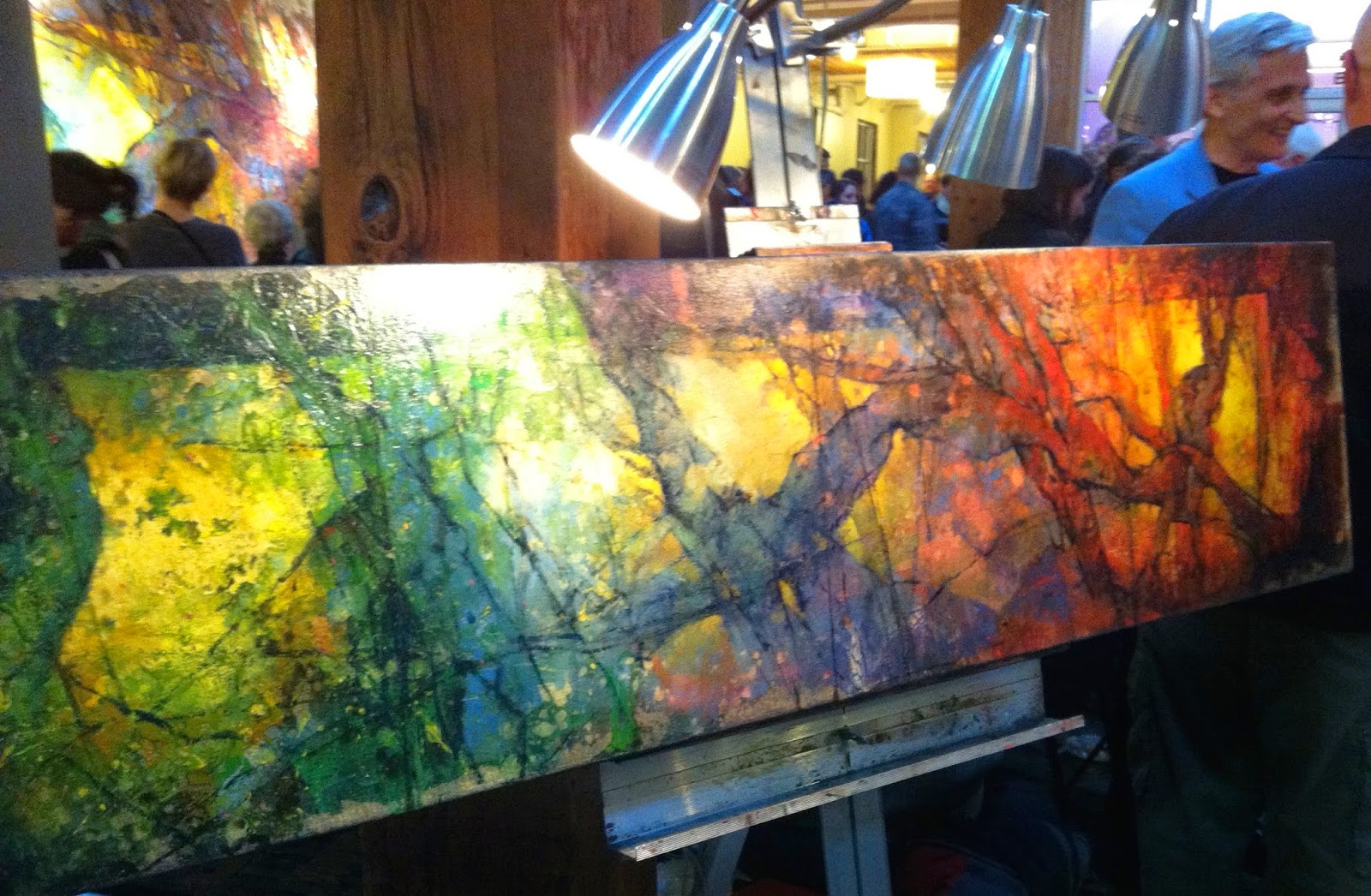 A tradition of going out to see what is happening in the galleries on a May evening had some special electricity today with the unveiling of a mural at The Village Gate by local artist Steve Carpenter.  A throng of people were on hand to celebrate a moment and the patrons were on hand with art lovers, friends and family, to see the new and very large semi-abstraction now ensconced in this public thoroughfare.

The artist, in a light blue jacket, was on hand to greet his admirers and you can also catch him now on a televised interview aired on WXXI this week. A video shot in his studio follows the mural's process and offers some insight into how and why the painting looks like it does.  Featured at the opening, a smaller preparatory version was on view sitting on an easel, so you could get a compact sense of what the composition was about - figures merging with nature, colorful patches of paint that relates to the seasons.  In a sense this is like a figurative Jackson Pollock, with a bit of Georges Seurat thrown in for good measure.

Down the street, I had a very interesting conversation with photographer Stephan Gersh, at his opening in the Spectrum Gallery at Lumiere Photo.  In his exhibition, beautiful photos made in park land and other rugged locales, highlight natural wonders up close and personal.  The digital prints on view make the most of a tonal range that is breathtaking and the subjects are in the grand tradition of Weston, Paul Strand, and Ansel Adams ( for whom Stephan Gersh once worked as an assistant ). 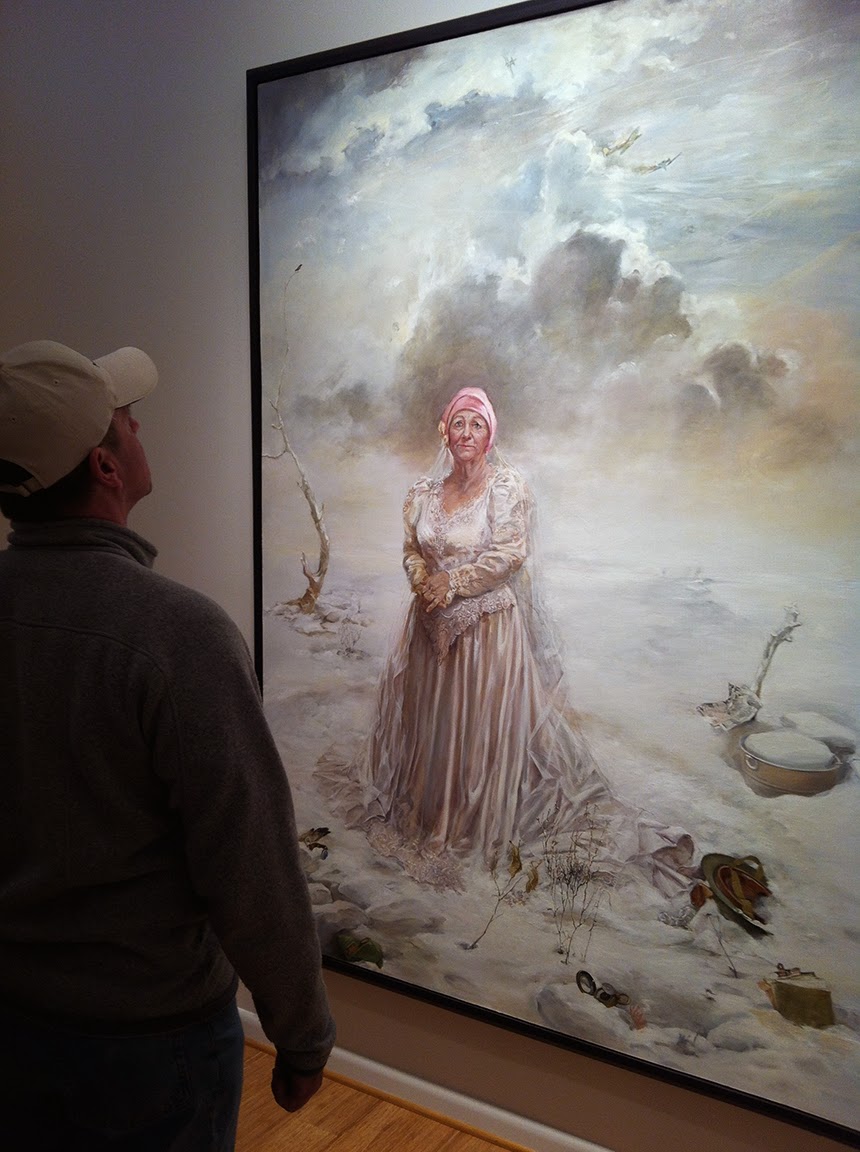 A few blocks away, the Axom Gallery has Joy Adams, who was on hand to welcome visitors to her show.  I had seen some of these paintings before at the Memorial Art Gallery, but I prefer this setting where you can get really close to see the artist's handiwork.  This selection features an alter-ego under the title of "Mad Sally with Things on Strings".  These are illustrative artworks that remind me of Edward Hicks' peaceable kingdom menageries.  "Mad Sally" is a kind of puppeteer who can control nature, but in one of the paintings she appears in her wedding dress, outside on a snowy day, clouds roiling, and other artifacts that hint of a melancholy and nostalgia for what once was. 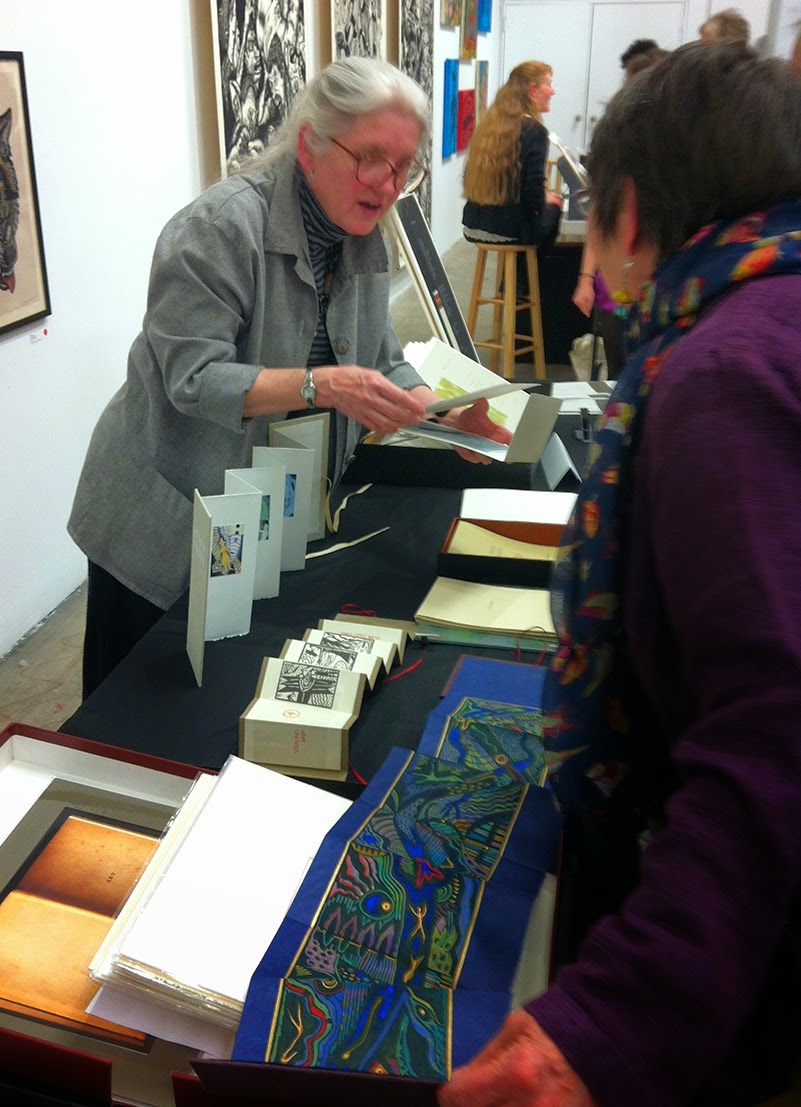 To the Rochester Contemporary Art Center for the print fair featuring artist members of Rochester's Print Club, who have set up tables to sell editions of their prints.  The Print Club is a membership organization dedicated to the promotion of printmaking and collecting prints, and there were beautiful things to see and buy.
Posted by Alan Singer at 10:04 AM