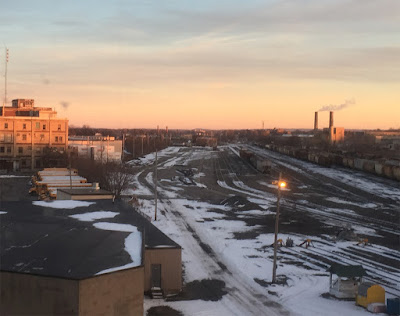 Snowy scene out my studio window
at the Hungerford Building
prior to a big snow storm...
January, 2019

Cold wintry weather was not going to stand in my way, so I am going out to see artworks by some people who have studied with me at Rochester Institute of Technology.  Here it is,  late in January and there are dual opening receptions for "Articulating Craft" as well as a solo exhibition of new media by Rebecca Aloisio in the Colacino Gallery - both shows in the Nazareth College Art Center. 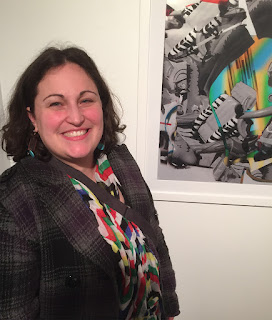 Rebecca Aloisio at the reception  for "Stratum"

Yes, I worked with Rebecca as an advisor - and introduced to her new ways of looking at printmaking and she uses the advances in technology to her benefit.  What I think is refreshing about her art are the new forms her abstraction has in evidence.  Large scale and small, her work establishes new connections between color and form, and yet has a deep relationship to the process of collage - and you can read about it in her artist statement. 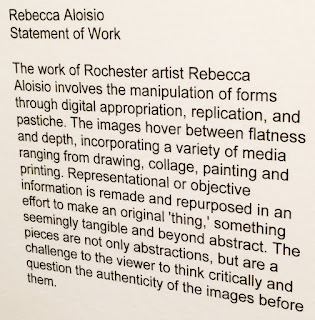 One of the large compositions near the entrance to the gallery resembles some form of a face, but also could have geological ramifications.  Crystals perhaps like a geode form where the mouth might be.  There are shallow overlaps like layers or strata - hence the name of her show "Stratum".
Back away a bit and the form becomes a standing figure ( an "Ice Man"? ) - brandishing a sword or pole.... 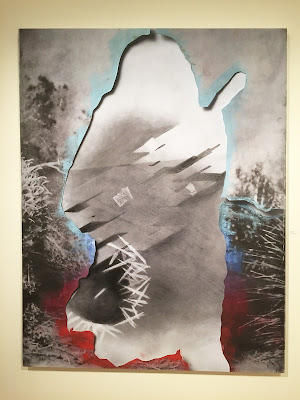 In the main exhibition hall another one of my students from R.I.T. - Chenyang Mu  has created unique bent glass pieces that are connected to flexible rubber tubes that pass through a sounding board so that if you breathe into a mouthpiece inserted into the rubber tube you can sound a musical note - not unlike that of a violin!  Chenyang Mu has created a quartet of new musical instruments - creating a music that is soothing, and meditative.  I like that her art really involves the viewer - you become an active participant! 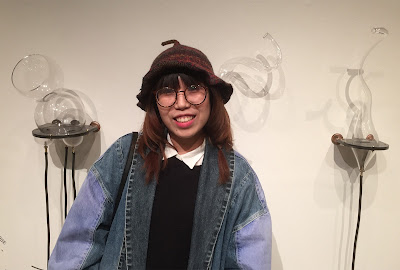 Next to the musical tubes there is a wall full of colorful plaster ornaments that could be worn around the neck and this part of the presentation is called "Workshop" by Brice Garrett. They are all lightly tinted and could be the beginning of a new fashion trend, and in fact there are several pieces in this show that can be worn as jewelry. 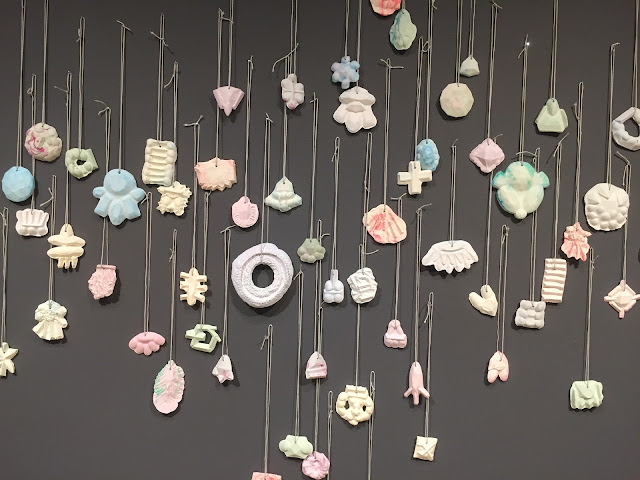 Another trend also represented in this exhibition are the 3D printed artworks and one item in particular caught my attention in black and white nylon called: "A Virtual Body" by Lauren Eckert.
It looks like a headset for VR with a bit of jazzy Op Art, but it is also a work of art itself.  The craft of printing in 3D has come a long way since I first came across it at Kodak, where they were printing models for their new cameras - this must have been 20 years ago now.... 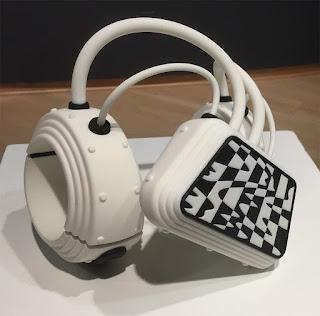 The art in "Articulating Craft" is everywhere on display in the Art Center Gallery at Nazareth College.  There is a price list for the pieces that are on sale.  The "Star Nosed Mole Belt Buckle", by Tom Muir however, is not for sale..... 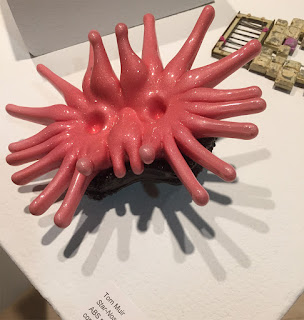 You Have To Be There 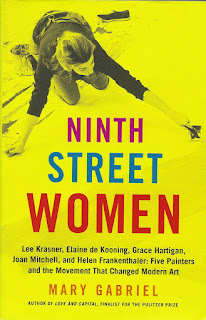 "Ninth Street Women" is a great read and a new big book by Mary Gabriel.  It is big in many ways, but first and foremost it is a story that needs to be told setting the stage for what is to come.  Women in the arts from my point of view have never been given the attention or the credit that they deserve.  I have been involved in the visual arts all my life, and this is what I have observed.  Our culture musters some support for the visual arts, but the women who stimulate the field and have been practitioners alongside men have been over-looked - now and in the past.  This new book attempts to play catch up, by telling women's stories, and giving us a profile of five painters from the mid 20th century. 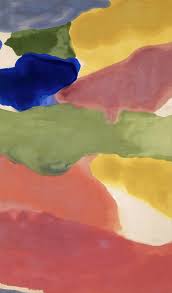 Helen Frankenthaler ( above and below ) 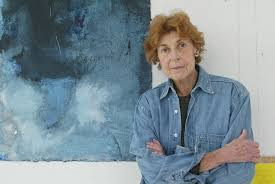 This is particularly important because there is a large constituent portion of artists I know who are women; they play major roles in the gallery and museum world too but the majority of attention has gone to the men involved.  This bias began to change back in the 1970s when feminism started to take hold in the U.S. and it was certainly strong in Ithaca, New York when I was a painting student in grad school at Cornell University.

"Ninth Street Women"  takes me back to the 1950s when my parents ( who were both artists ) took me around to art galleries in the Village (NYC ).  Later when I was in college at Cooper Union, I lived on east 11th Street so I knew the physical layout of the city, and I was living right there where everything happened.  My next door neighbor was Dore Ashton, an art historian who wrote a lot about the action of women in the arts.  Dore Ashton brought Helen Frankenthaler to speak to students in my class.  I also met many of the people who Gabriel quotes in this book.  As far as I am concerned her book is a must read.  She writes in a descriptive fashion that takes you into the lives of Lee Krasner, Elaine de Kooning, Grace Hartigan, Joan Mitchell, and Helen Frankenthaler - and these five women helped change the course of modern art.

I went out to roam the city and see the shows of these five women, and I also had the chance to hear from them in person, and that is important.  Seeing artists do their thing- talking about what they love - that is happening here in Rochester too.  Just this past Friday night at the new RIT City Art Space there was a wonderful talk with Leonard Urso and Willie Osterman.  John Aasp introduced them and just to hear their stories behind their art was a thrill.  This is the last week of their show "Emergence", the evening was cold, but there was a large turnout. 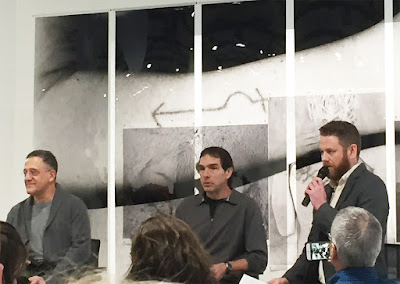 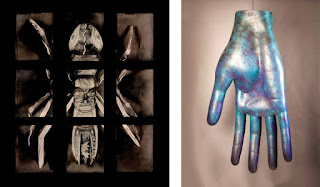 It was a very cold evening when I had my own opening this past Saturday at Axom Gallery.  I plan to give an artist talk in dialog with artist Rebecca Aloisio and that will take place in the Axom Gallery during the afternoon of February 9th from 3-5 pm, so come on over if you are in town.  Here is a link to the gallery:
https://axomgallery.com/ 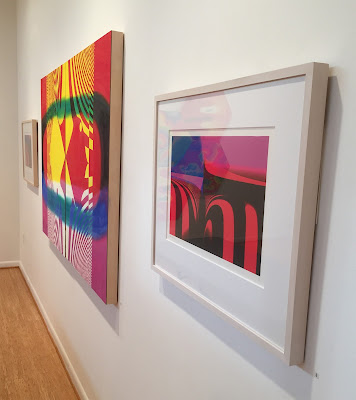 Finally, I want to urge you to see the show happening now at the University Gallery in Booth Building at R.I.T. = see the packed show of posters and graphic designs from Abram Games. I remember this work from many years ago and there is so much to say about this era of design from a time when I was growing up.  These posters were part of the culture we lived in from the 1950s through the 1970s and it is fitting that they found a place to exhibit them in the Vignelli Design Center.  Below is a fine example from Abram Games. 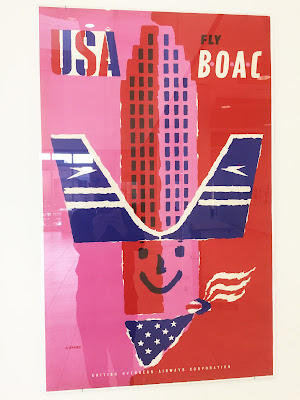 Abram Games at University Gallery
Booth Building on the campus of R.I.T. 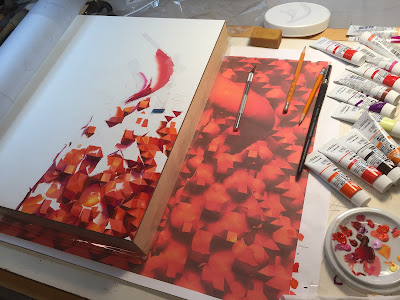 My new painting is underway...
Acrylic gouache on gesso board
January, 2, 2019
Alan Singer

In preparing for my new solo exhibition here in Rochester presented by the Axom Gallery,  I have written an artist statement about the path I have taken over the last decade or so which is to blend science, art, and mathematics - certainly a direction I have been  interested in for many years.  And in many ways  the images I produce are related to the basic building blocks of life - with cells and energy as constituent parts.  My compositions express a certain kind of dynamic geometric relationship. 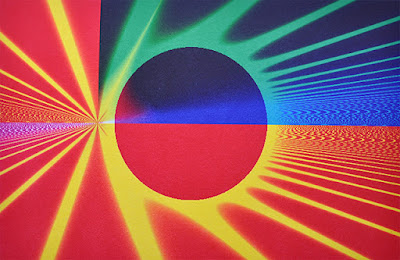 As I have written in my statement, I would have paid much more attention in my mathematics classes in junior high school, if my teachers had told me that there was a visual component to algebra for example.  If I could visualize how the numbers worked and what they signified in relation to one another, I probably would have been better at math ( I hope! ).  Well,  now there are personal computers and they have a screen where you can play with numbers in a very visual way to construct new forms or just play with geometry.  You may not realize it but a program like Photoshop functions on applied mathematics. Photoshop builds a grid of pixels which are so small they look like they blend seamlessly. 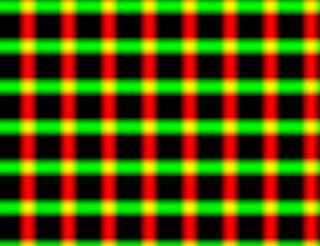 A grid built with a color plot function
gives you left to right, and top to bottom measurement

I have written in the past that using a computer has enabled me to compose imagery and  construct in a wide range of colors, and at the most basic level it reminds me of  the Etch-A-Sketch I had as a kid.  The Etch-A-Sketch has two dials and each hand can control the movement of a stylus that creates an impression from left to right and from top to bottom.  Now on my computer I have a program called Cinderella, and it can plot in an RGB ( Red,Green,Blue ) color palette the same kind of functions that you get in Photoshop using simple mathematical commands - so if you can measure it, you can show it. 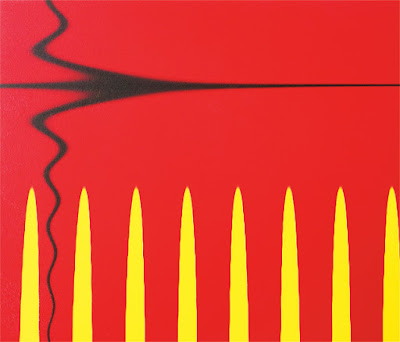 Just getting used to writing the commands for the Cinderella program took a while, and when I could practice I would try out different ideas and see what I could represent.  This image for example reminded me of some sort of heart rhythm.  I found that a set of mathematical commands could give a representation that could resonate on a whole other level.  Sometimes I thought that I was discovering universal principles this way, though I didn't know at first - what kinds of questions I should ask to get these results - it was all experimental for me.  A couple of years later I could get my image to dance...( see below ). 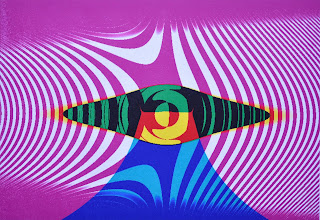 This is all very two-dimensional, the construction of my art gets more complex when I introduce the illusion of depth and sculptural form.  Luckily I found, and downloaded the program called 3D-Xplormath, and it allows me to build in three dimensions.  This program was "invented" by Richard Palais and has several features that would attract the artist.  3D-Xplormath allows you to construct dimensional geometry and see it from every angle.  I could also save my experiments in 3D geometry and see what they look like in other formats that would allow me to compose a scene.  Here is an example of geometric forms arranged in a composition that appears to have real depth.  It opens the way for some very creative, almost theatrical building of space, including many opportunities to light the stage, so to speak. 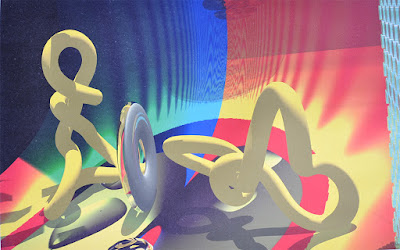 Such potential!  I can't wait to get back to work, to explore new forms and experiment with my mathematical shapes.  If you are at all curious to see what I have discovered, come over to my show which will open at Axom Gallery, 176 Anderson Avenue, in Rochester, New York.  The reception is scheduled from 4-7pm on January 12th, and the show runs through February 23, 2019.  Call for further information: 585 232-6030.  See you there, and Happy New Year!