I Know They Know 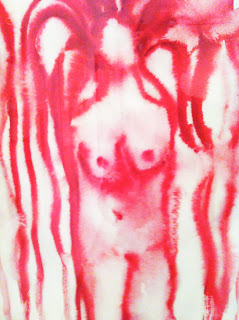 If the government is conducting surveillance and reads my blog, at least they will be learning something about what to see in our part of New York State!

On a sunny day, I ducked inside the Herbert F. Johnson Museum on the Cornell University campus in Ithaca, to see their exhibitions.  The new entrance to the museum leads you downstairs past a partially enclosed Japanese garden and towards a temporary exhibition extolling the artistic potential and virtues of human hair.

The show accompanied by a handy little catalog was developed by The History of Art Majors' Society, and on the walls of the museum were myriad images where hair and hair styles play their part ( no pun intended). 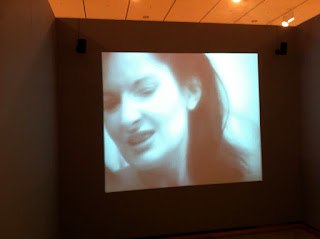 Marina Abramovic in a video projected on a wall is seen brushing her hair furiously and intoning that:"Art Must Be Beautiful" and the "Artist must be beautiful" meanwhile her image conveys frustration as the performance piece continues and the quandary deepens....  The subtitle of the show is "Untangling Roots of Identity" and this concerns both sexes - made memorable by the image of Ernesto Pujol all dressed up in a white habit of a Catholic nun that totally obscures the hair and calls into question the sex of the wearer.

Red dyes on silk is the medium in which Louise Bourgeois completes her thoughts on hair - and her funny image equates a faceless woman with a fountain continually spouting.  My friend,  Kumi Korf has a little print in this show that portrays a free floating hairstyle ( no face once again ) and short straight bangs.  How we look, and how we present ourselves is all part of our design, and it becomes identified with who we are and what we would like others to think of us.

A space is set aside for an extensive collection of weavings that the Johnson Museum has received as a donation.  Here I found a radical departure from the pictorialism of hair concepts in the rich geometry of a Naga Culture textile from 1930-1950.  The Naga Culture is from Burma, now called Myanmar and the strong grid is reinforced cotton with cowrie shells. 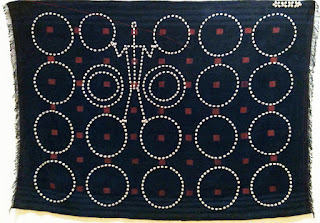 In the next room Kumi Korf is given more space to lay out a mini-retrospective of her prints and artist's books.  Kumi is also an architect and the three dimensional aspect of her artwork is very engaging.  There seems to be some influence from Joseph Cornell's shadow boxes in Kumi's artwork, as well as an aesthetic of biomorphism combined with calligraphy.  I am attracted to her recent prints like "Starr's Garden" - an intaglio print on Akatosashi paper, and I was struck by the unusual geometric forms of her book: "The Alphabet of My Phobias". 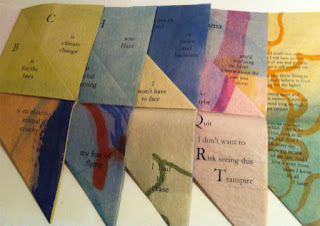 Kumi Korf's "The Alphabet of My Phobias"

Upstairs, in the Johnson Museum is another solo show titled "Summer Breeze", the paintings and drawings of Alice Dalton Brown.  Here, paintings dominate the space and Ms. Brown - a photorealist - portrays a world of sunlight in an empty room ( without the existential angst found in Edward Hopper's painting of the same name ).  Alice Dalton Brown has a quiet, patient approach to art making and it strikes a slow, determined, therapeutic note in contrast to a world that seems to constantly rush by.For this viewer the paintings are repetitive - seeming to strike the same notes over and over again, all done with a consummate virtuosity, of course. 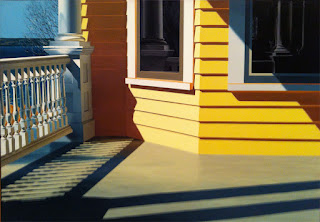 Outside of the museum and just up the street is the new wing attached to the School of Art, Architecture and Urban Planning.  Opened this past year we have the marquee designs of Rem Koolhaas and you should take a walk through the new premises to see what can be done to shape the academic environment and give those students some new ways to think about space.  I was impressed, this sets a new standard, and an example to build upon. 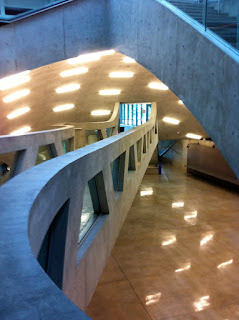 When I was a student getting my MFA at Cornell in the 1970's, I watched as the I.M. Pei designs took shape as the Herbert F. Johnson Museum went up on campus - it is still striking now forty years later.
You should take a look!
Posted by Alan Singer at 10:20 AM 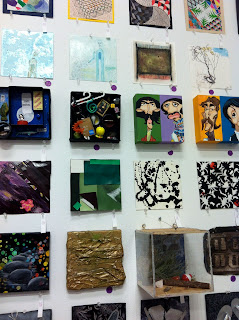 I took a break from my painting of an iris blooming in my backyard to look around at the latest incarnation of " 6 x 6 " at RoCo.  This fundraiser never disappoints- there is something for everyone  and the price point for works of art was never better!

The official greeter at the gallery let me know that the exhibition contained over six thousand tiny works of art and that more than 1400 have been sold - towards a goal of selling over 2000 before the show closes July 14th.  The show and sale opened last week and sales continue also online where you can slowly view the entire collection.

The fun thing about this is that the artworks are all anonymous - that is,  there is no signature on the front to identify who made the art - all the buyer needs to do is plunk down their $20. and it is theirs.
Artists donate their artwork to help RoCo raise the money they need to operate.  I donated three small prints and they are hiding in plain sight, maybe someone will find them!

The show itself is hard to categorize beyond the size of the works aligned in a grid on the wall.  Many of the three dimensional works have already been sold and I think textures go a long way towards attracting attention.  Some of the art is easily identified with their creator - so if you are up on your contemporary art, and know the work of many artists - you probably can spot some works by a favorite artist, and then go and try to buy one for your own collection. 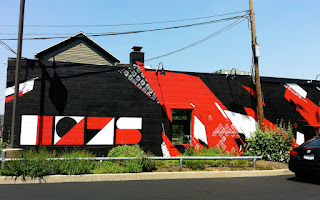 This summer keep your eyes open for murals being painted.  Last year there was quite a lot of attention being paid to the murals near the Farmer's Market.  I saw this wonderful mural on the side of the 1975 Gallery with a fresh coat of bright red on a clear day in June.  The initiative to bring murals to the street can be very interesting and a calling card for something a city has to offer.  Just take a look sometime when you are in Philadelphia, PA.  The murals there attract so much attention - there are regular tours to go and see what's up.

Now I have to get back to my painting before the light goes, or it starts to rain again! 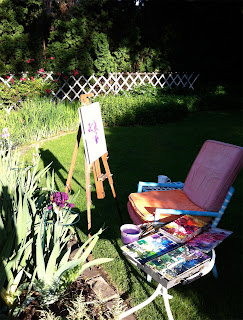 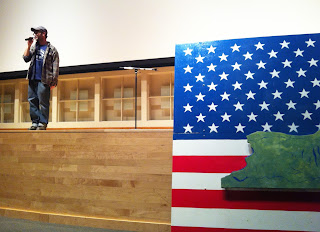 Friday night in the Statler Auditorium on the campus of Cornell University, the director Josh Fox brought the crowd to its feet even before the movie started.  Josh Fox is the force behind "Gasland" and "Gasland 2" - both films that tell a story about recent developments in shale gas extraction - and much more..

The style of the film is cinema verite where a handheld camera juggles around too much - but this technique also lends a bit of an edge to the proceedings - especially when his camera is taken into a hearing room on Capitol Hill in Washington, D.C. where we see Josh Fox being arrested for filming a public forum.

His documentary artform is put to work making a case against fracking even though this point of view gets skewed at the beginning by recapping the horror story of the BP oil disaster in the Gulf from a couple of years ago.  There are many layers of information in the present film, and it covers a lot of the same ground that the first "Gasland" explored.  What was different for me this time was a follow-up discussion held in the Auditorium with many of the folks who had been interviewed in the new film.

People who attended this screening were able to ask questions of some of the experts including Robert Howarth who is a Professor at Cornell.  Howarth drew our attention to the amount of methane being poured into our atmosphere, and he touted a new plan to hook up our power grid to other energy sources, not natural gas.  Hopefully the activists in the audience will begin to promote the new plan to change over to renewable energy sources ( wind, water, bio fuels, etc ) and move the New York State government towards a positive action for our environment.
Posted by Alan Singer at 6:24 PM