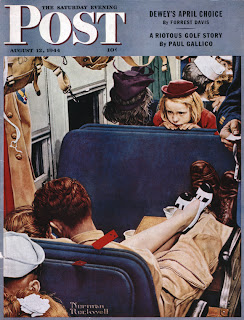 Norman Rockwell: Behind the Camera
at the George Eastman House

When I was in college, students at my art school would make snide comments about anyone's artwork that looked like Norman Rockwell's.  Of course, this was at the height of an American romance with abstraction, in the wake of Jackson Pollock and Willem DeKooning.

Then along came Andy Warhol and the whole argument was upset.  Pop Art was a kind of insider's joke about American culture, except that it was seen by the public as a catalyst towards becoming a celebrity artist - taking mass marketing as a subject to capitalize, in Andy Warhol's case.

I can see it now from a new perspective.  Teaching art in college as I do, one can see what people's aptitudes allow, among a cohort ( of art students ). For example, students who are learning illustration still respect the ability to draw from life, and they practice that skill.  Almost all art students respect the use of the camera, enabling them to build a composition with the requisite amount of "information".

Just as Norman Rockwell achieved widespread appeal as the artist who painted covers for The Saturday Evening Post - he lost the respect of the fine art world as he was catering to his clients and in the process appearing mawkishly sentimental.  Fine artists would call this "selling out" or even "buckeye" (keeping your eyes on the bucks $$$).

Maybe today we are all grown up and don't make the fine distinctions which were so divisive about the holiness of fine arts versus illustration.  This argument would be lost on the general public, and eventually dismissed - just look at the elevation of an artist and illustrator Maxfield Parrish for example.  Norman Rockwell has a lot in common with Parrish, especially on a formal level.  This brings me to another point - can you really tell the difference between Norman Rockwell's illustration and, say the paintings of regional artists like Grant Wood?

When Norman Rockwell's paintings begin to sell for a million at auction, people begin to notice, and to collect rather than criticize.  I look at the exhibition of Rockwell's art at The George Eastman House from a different angle.  When I was younger I spent years as an illustrator and designer;  I didn't mind working on commission, and I never missed a deadline.  Of course there are differences between illustration and fine art - the first being the intent of the artist.  When I look at Norman Rockwell's art on view in the show, I see an artist who goes out of his way to create a pleasing picture suitable for a mass market that tells a succinct story.  Rockwell really is a visual journalist who hits his stride in the late 1940's. 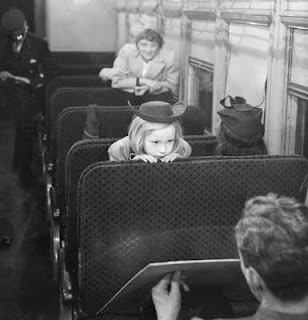 The George Eastman House presents Rockwell paintings alongside the photos he orchestrated.  The focus is on characters, and the gallery visitor can see how closely Rockwell followed his reference photos.  His best models were his neighbors - whether it was in Arlington, Vermont, or later in Stockbridge, Massachusetts.  Rockwell played the role of the director - getting the character's face just right to express the emotion of the story, fixing the lights just so, all with the right props and attitude.  And the funny thing was that Rockwell hired photographers to do the camera work, as he said - he had enough other work arranging the shoot and making the paintings.

The interesting thing in this exhibit is comparing the photos to the original art when it is available.  I think there are too many reproductions in this show for me, but it goes to underscore the point that this art was created precisely to be reproduced in the hundreds and thousands and millions of copies.
My art students would say that Rockwell was corny, but he was also able to deal with tricky social issues during the civil rights era of the late 1950's and early 1960's.

At the entry to the show, in the short documentary film narrated by Norman Rockwell's son Peter,  he mentions the paintings depicting the four freedoms annunciated by F.D.R. ( which I consider to be among Rockwell's finest work) and it is a shame they are not included in the present exhibition.  With that exception, we can learn a lot about Americana through the lens and the art of this illustrator.

A couple of funny things hit me as I was leaving the show.  I made a connection between Norman Rockwell's use of stencil lettering to sign his name on a painting and the use of that same technique by Jasper Johns.  And thinking about Jasper Johns - his flat and frontal approach does have something in common with Rockwell.  Then I saw "Merry Christmas Grandma.. We Came In Our New Plymouth"
an advertisement made in 1951 with an accompanying photo of a little boy who looks as if he was straight out of a Diane Arbus photo.  With a heightened sense of irony, I left the show and thought about that for a while.  It is all about the artist's intent.