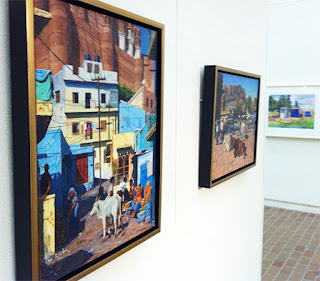 Robert Heischman
at the Bevier Gallery at R.I.T.


December is the month of the art fairs in Miami, and the idea of a warmer climate and all that visual stimulation motivates me to go out and see what's up in our area.  I didn't have to go far, because there is a faculty exhibition at the Bevier Gallery where I teach at R.I.T. and this show has some attractive aspects.  One of my favorite pieces in the show welcomes close inspection: a carved and sanded wood plate by Rich Tannen that employs a kind of Sol Lewitt design of cubes divided into parallel lines on a subtle wavy panel of glorious simplicity.  Robert Heischman paints the streetscape of India, complete with sacred cows, while on the other side of the partition there lurks a glass block with what looks like a cast of an ancient trilobite. 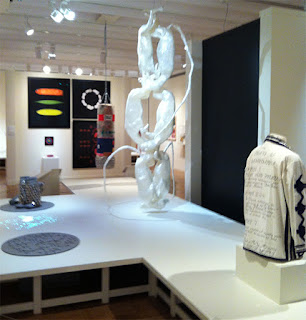 installation view at MAG
of "Changing Hands: Art Without Reservation 3"

If you want to open a new avenue of art exploration you must see "Changing Hands: Art Without Reservation 3" now on view at The Memorial Art Gallery.  There are so many new things to see, and such a vital call for your attention, we are honored to have this traveling exhibition here in our midst. You can also learn a lot by noting how this exhibition is arranged: three categories, art is aligned with a point of view - 1.  Evolution and Exploration  2.  Natural Selection  3. Historical Provocation/ Decoding History.

Native american contemporary art has not been given this kind of forum often, but things are changing and a market is developing for these artists.   Some of the featured artists carry over craft traditions from the trade goods of the 19th century - updated and upgraded - an example of which I found in the works of Dawn Walden ( Anishinaube (First People)) and Jeremy Frey (Paint Basket).

I haven't been in many museum shows that include decorated heavy weight punching bags ( Jeffrey Gibson's "Everlast" ) or a chain of animals made out of packaging tape by David Hannan.  There are delectable objects in this exhibition that capture my eye like Dan Townsend's amulet "Speaker of the House/Warrior made out of mother-of-pearl oyster shell that both recalls Mayan Art and Keith Haring at the same time. 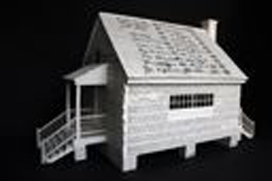 Alan Michelson at  MAG
part of the Changing Hands exhibition

The political angle of being effective as a Native American artist is explored in some powerful ways, just go see this show and find Alan Michelson's "Phoenix" made out of handmade paper, or Shan Goshorn's "Educational Genocide: The Legacy of the Carlisle Indian Boarding School" made out of a sliced up historical photo of Indian children in front of the notorious school.

I was glad to find the products of G. Peter Jemison in this show -his signature decorated shopping bags were found in a long vitrine.  Last year I had Peter come to R.I.T. to speak to students about some of the same artists that are in this show.  Buy the catalog to read the essays and you come away from this gallery experience with new respect - and you will want to see more! 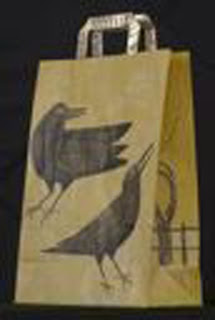 Peter Jemison at MAG in
Changing Hands: Art Without Reservation 3 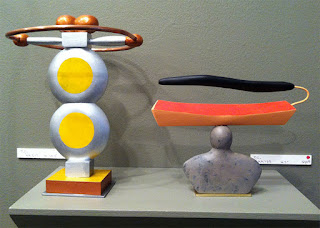 Tarrant Clements has a host of new intimately scaled sculptural artworks on display at Phillips Fine Art, 248 East Avenue.  Though the gallery itself is small in comparison to other art gallery spaces in Rochester, Tarrant's  dimensional artworks hold their own because of their often colorful aggregations of wood, wire, and even some kitchen utensils!  The exhibition titled "Celestial Songs" has part of its intent to be humorous - with one foot in folk art and one foot in formalism, while another aspect of her work can remind me of early armillary spheres    ( scientific models of planetary orbits ) and other forms of assemblage.  Tarrant Clements has a genius for invention, and all the while she demonstrates a firm ambition and a nod of respect for European Modernism. 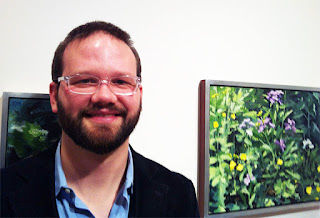 When I first met Kurt Moyer in his studio at the Hungerford Buillding I was surprised to see reproductions of paintings by my teachers from Cooper Union, notably Robert DeNiro, Sr. and Paul Resika.  These two artists from New York City were renegades and they formed a larger group that included painters Lennart Anderson, Leland Bell, and Paul Georges - all involved with figurative art at a time when the artworld was head-over-heels in love with abstraction( in one form or other ).  So why was Kurt Moyer ( who is a lot younger than I am ) associating himself with this earlier generation of painters?

When I was a college art student my guiding lights were artists like Poussin, Titian, Corot and Paul Cezanne - who said that he once wanted to paint "Poussin from nature".  Kurt may be younger, but he seems to be attracted to the same magnets of the human form in natural settings as one can see from his solo exhibition titled "New Arcadia" at Axom Gallery.

That Kurt goes outdoors to paint from time to time is nothing new; artists have been painting en plein air for decades, and although the traditional landscape painter hasn't been in the mainstream of American contemporary art doesn't seem to stop artists from gathering their materials to see what can be accomplished.  Having models pose in natural park-like settings was a theme that was handled recently by Keith Howard in a show I reviewed a few months back at Axom Gallery, so are we seeing a trend?

Where Keith Howard's art followed along the Adam and Eve Story, Kurt's narrative is a bit more generalized.  This demonstrates again, what can be taken from classical art and how it can be re-modeled and seen freshly.  Looking at Kurt's paintings reminds me of watching students swim in Nine Mile Creek along the reservoir in Ithaca.  There is no doubt that this art has a retrospective look, owes a debt to Cezanne, and looks toward a new choreography. 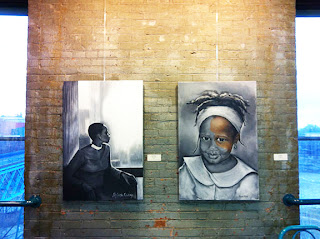 The Center at High Falls Gallery

The Center at High Falls Gallery is a beautiful open space, with a schedule of shows drawn from the many artists of our diverse community.  The exhibition season is arranged around theme shows and the spirit behind this ongoing enterprise is Sally Wood Winslow.  At the moment there is a friendly show of paintings hanging in the main gallery, with many portraits by artists like Richmond Futch.  This gallery space connects with people, and it is a real asset to the Rochester area and its vibrant art scene.
Posted by Alan Singer at 3:47 PM