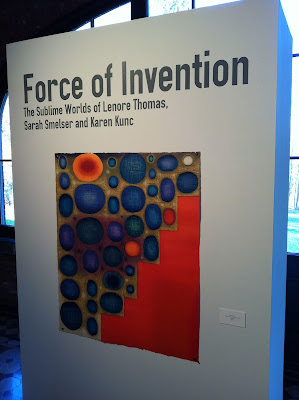 There are aesthetic qualities that give hand printed images on paper a certain look and the artist Karen Kunc calls this "Printedness".  The agency of the printmaker is only applauded after a protracted focus on making a plate that is then inked and printed successfully.  Delayed gratification is always a factor in learning how to make a print because one never knows what you are going to get until the last few moments on the press.  Printmaking is absorbed in process; you have to be patient - not lose your enthusiasm to bring the print to its fullest expression.  Some artists work on their own plates and make their own prints, while other artists may create the plate or plates and have master printers make the print or a numbered edition.

Let's not get lost in the technical minutia of how to make a print - but concentrate for a moment on what story is being told with the image.  If you want to speculate on the value of metaphor in visual art, I can think of no better place to start with than the exhibition at Hobart William & Smith College, curated by Nick Ruth - now at Houghton House's Davis Gallery through December 14th.   Aptly titled " Force of Invention ", this show features "the Sublime Worlds of Lenore Thomas, Sarah Smelser and Karen Kunc".  These three active printmakers share a concept - to establish a narrative in an oblique fashion - they rarely address their subject matter in a realist or photographic sense - their stories play out between the realms of abstraction and personal symbolism.  Karen Kunc and Sarah Smelser both have a more kinetic dialog going on in their graphic image than does Lenore Thomas.  Lenore's prints tend towards flat planes of color, they are more obviously landscapes or diagrams of geology topped by a pattern created by applying smoke to the surface of the printed paper. 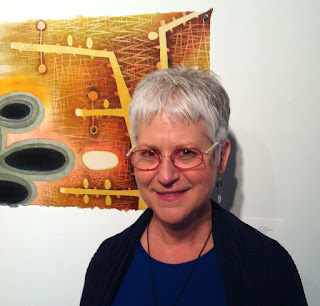 There in Geneva, New York, we were in the land of the artist Arthur Dove who lived there ( in the early 20th century) and pioneered a kind of exuberant abstraction whose legacy is shared by the printmakers in "Force of Invention".  Sarah Smelser works in the mid-west as does Karen Kunc, and in their art they seem to grapple with relationships of physical forces, interactions of color and layers of space in general. Smelser tends to be a bit more diagrammatic; Kunc tends to be more theatrical and both of these artists deserve more attention - their art certainly attracted my eyes.

Closer to home, I attended the opening of "Contemporary African American Printmakers" presented by Deborah Ronnen Fine Art in the Arts Center Gallery of Nazareth College.  The present show coincides with the Rochester premiere of "Lighthouse/Lightning Rod", a production by Garth Fagan Dance and the composer and instrumentalist Wynton Marsalis.  During the opening of the print show I had the opportunity to congratulate Garth Fagan on his successful collaboration, and I look forward to a terrific evening of modern dance and music.

Taking a look at the prints in this installation - we get a more diverse grouping than was found in "Force of Invention".  A visitor looking over these contemporary prints can find realism in the style of Rembrandt and Goya in the artists Kerry James Marshall and Kara Walker respectively, and one can also find reductive abstraction in the prints of Jennie C. Jones and Martin Puryear.  One of the more surprising aspects of this showing of African American prints were the "translations" from the Gee's Bend quilters.  I remember being taken by the quilts when I saw them in a show organized for the Whitney Museum in New York City, but I did not know that prints ( color aquatints with Chine colle ) had been made to document the look of these groundbreaking works of art. 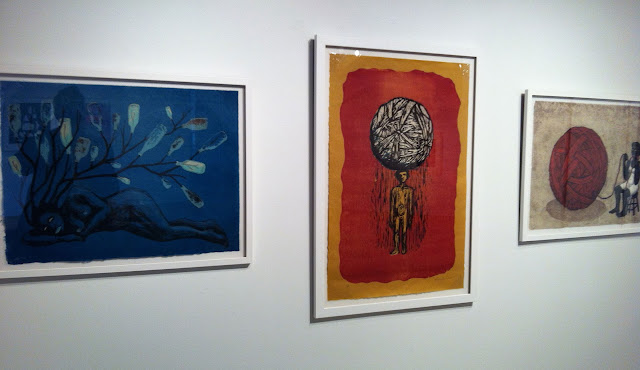 When I was painting in my loft in Brooklyn during the 1980's, my neighbor across the airshaft was Alison Saar, and I could watch her work away on large scale models, rugged forms which were part of her narrative about the social predicament and semiotics of being a working African American artist ( from a family dedicated to the visual arts ).  How to grapple with a painful history of a people, maintain your dignity as a person, control the integrity of your art and contribute to society as only an artist can - through a transforming vision - that is what I get from Alison Saar.  We will all see her artwork onstage with Garth Fagan Dance as she contributes the sets for this production of "Lighthouse/Lightning Rod".

The nine artists, plus the women of Gee's Bend who contribute the quilt works constitute a wide range of artisitic expression.  Of the younger artsits, Mickalene Thomas is a rising star, and her screenprints have a jazzy surface texture especially in "Why Can't We All Just Sit Down and Talk It Over" from 2006.  Luckily, for this viewer, there is much to see and think about, that is my take away from all of this "Printedness".
Posted by Alan Singer at 2:30 PM