The Very Next Day 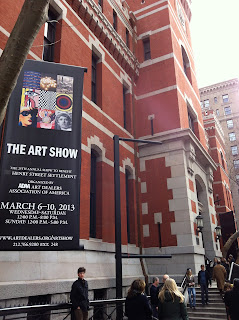 Want to find a more enjoyable venue than Piers 94 and 92?  Tired of fighting the crowds?  How about a show at a real armory?  Sunday, around noon, upon entering I found the art of Jean Arp - reliefs that he is known for and pedestal works that remind one of Brancusi.  Arp is not as stylized as Brancusi, so call this organic abstraction, and think of the impact of silhouettes and simple form ( you will see it again in the Arthur Dove watercolors scattered around the other exhibitions ).

Tam Van Tran waves in the air next door.  I wondered how his gossamer panels of copper leaf were ever transported to and from the show. ?

A few Edward Hopper watercolors were on view,  Hirschl and Adler had "Towards Boston" a memorial to a little train station ( in South Truro according to Gail Levin ).  I was introduced to Hopper's watercolors by my father, Arthur Singer, who was also a terrific watercolorist.  In fact, some of my father's paintings will be part of a show that will open in April at The Edward Hopper House in Nyack, NY.  This is where Edward Hopper grew up, and it has been turned into an art center.

Back in the aisles of The Art Show I found the art of William Delvoye at Sperone Westwater.  His is an intricate re-appropriation of historical styles that in this show diverge into sight-gags ( the printed pig ) and substitutions ( the gothic cathedral filigree ).  Looking into the little silver bulldozer or the cement mixer and I am reminded of Chinese ivory carvings and other kinds of detailed trophies - they are startling... and then what? 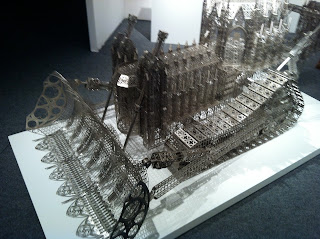 Gallerie St. Etienne had a strong selection of Egon Schiele works on paper - I would call them "psychological portraits" and it is as if you could look into the minds of these subjects and read them like a book.  Very engaging.

I loved the simple beauty of Robert Adams' photos in "The New West" from 1968-1977.  these were matter-of-fact documentary scenes from the western states in the midst of expansion - construction sites, some desolation, wide open vistas, and empty streets.  A recent publication from Yale University is dedicated to these photos, so find all three volumes in the set "The Place We Live".

Across at the next booth, Tibor De Nagy had a selection of John Newman works in a solo show titled " Everything is on the Table".  Here is an art that has paradox, and a sense of humor.  These works, whether they are sculpture or drawings have a playful attitude towards form, they are often richly patterned and have elements in a kind of suspended collage. 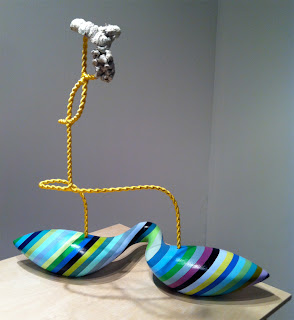