Write What You See 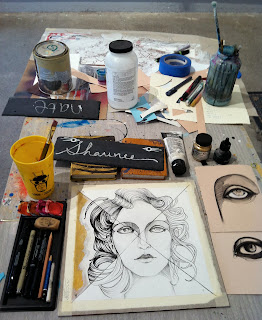 An exhibition at 1975 Gallery had as part of their show a little table with some artwork underway and a scattering of simple art supplies, a few used watercolor pans, a brush, some pencils - which inspired ruminations and nostalgia from a visitor.  These humble materials can be transformed by drawing and painting and this activity opens a door for one to walk through, especially if you are a young artist filled with dreams and imagination, the prospect can be both liberating and daunting at the same moment.

Young artists often look for inspiration and kinship perhaps outside of their immediate family.  I grew up in a family of artists, so in order to stake out my territory, I had to go out and find it first, and I did that by looking at everything and by being actively engaged as a student ( I also had the temerity to get into arguments with teachers and older artists as a youth ).

In college, the prevailing styles of Pop Art and Conceptualism gradually overwhelmed the Abstract Expressionists, but somehow I was more involved with figuration having gone to the Art Students League in Manhattan to draw from the model each week from the time I was 14.

Was it luck or by design, that when I was in art school at The Cooper Union - I found a group of teachers who were artists that went against the grain.  If the trends in the artworld went towards minimalism, these artists went towards a more traditional path that grew out of European painting and sculpture.  So, if you walk into the National Academy of Design at 1083 5th Avenue in New York City you will find a show titled: "See It Loud" which features seven post-war American painters - all involved in a representational art which I found fascinating when I was a student. 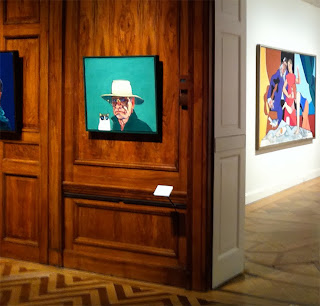 on view at
The National Academy of Design
New York City

The artists from "See It Loud" formed a small society and there were at least two painters missing from this group which I feel would have made a more well rounded argument in the visual sense for the time (Robert DeNiro, Sr. and Louisa Matthiasdottir).  You could say that this group of artists ( the loyal opposition ) humanized an artworld that was increasingly commercial, and also paid respect to the great art ( and artists ) of the past.  What is surprising to find out is that these seven artists ( all of whom I had met ) had studied with masters of abstraction such as Josef Albers or Hans Hofmann, so they willingly made a decision to find value in various forms of figuration and landscape which is in evidence at the show on Fifth Avenue.  Making your art and staking a claim to a part of the visual landscape in the artworld came with a price, in terms of visibility, but this also had its attraction, as I have said, to a younger artist. 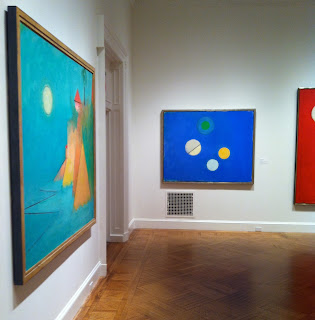 Take a look around "See It Loud" and you will find paintings by artists who have not had their full stories told yet.  There are surprises to be had, most notably for me in the portraits by Peter Heinemann, and the landscapes of Al Kresch and Paul Resika.  There were also almost bas relief paintings by Stanley Lewis that were engaging, and other works by Neil Welliver, Paul Georges, and Leland Bell. 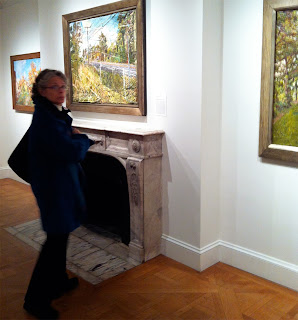 Paintings by Stanley Lewis
at The National Academy

Leland Bell, who also had been my painting teacher in years gone by would speak eloquently about Piet Mondrian, Alberto Giacometti, and Andre Derain and you would be forced to take another look at these artist's work - now seen in a new light.  Paul Resika would make a case for studying the relationships found in nature by dragging us ( students ) all out to paint in the country like a modern day Cezanne.  Even Paul Georges stirred some energy into paintings of myth and grand dreams of a new figuration which was also being proposed by more analytical artists like Lucien Freud and Philip Pearlstein. 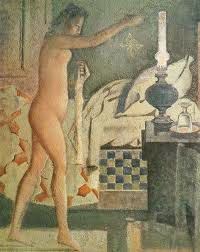 Balthus at the Metropolitan Museum of Art

So, go and see the show "See It Loud" where you can view the vital, colorful paintings by this handful of artists, and then continue over to the Metropolitan Museum to see their precursors like Balthus, now on view in the show "Cats and Girls" Paintings and Provocations.  Or spend some moments in the new installation from William Kentridge called "The Refusal of Time" - it is worth the price of admission alone.  This Thanksgiving there are many reasons to be thankful, and mindful of family and friends, as we watch the parade and get caught up in the flow of events.
Posted by Alan Singer at 3:51 PM