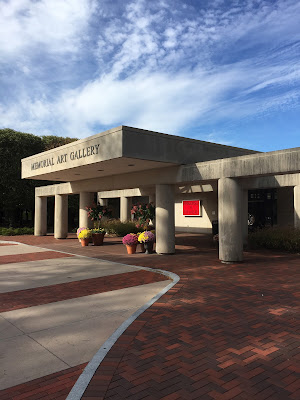 On Sunday, I was in attendance for an interesting interview after the opening of the Alphonse Mucha ( 1860 -1939 ) exhibition at The Memorial Art Gallery in Rochester, New York.  I had noticed when I was at the member's preview that some of the Mucha images on view came from the private collection of Frances and Albert Paley.  Up to that moment it had not occurred to me that the Paleys were collectors of Art Nouveau.  Getting back to the interview - it was conducted by R.Roger Remington with Albert Paley on stage in the MAG Auditorium.  Both Albert and Roger have a long association with R.I.T. ( Roger has been with R.I.T. for over fifty years! ) and I gathered during the stage presentation that this is not the first time that Roger has interviewed Albert. 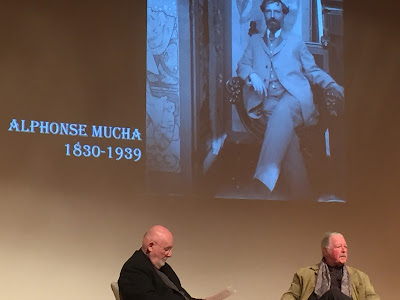 R. Roger Remington on left, and Albert Paley on right
at the Alphonse Mucha exhibition held at The Memorial Art Gallery 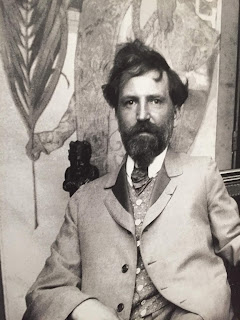 R. Roger Remington is a Professor, a graphic design historian and printmaker who has a deep connection to leaders in the field of design such as the late Massimo Vignelli.  Roger is responsible for the Vignelli Design Center at R.I.T. which holds a vast archive of design work going back through the mid-20th Century.  Roger is also a noted author, and had some interesting questions to ask Albert Paley about his relationship to Art Nouveau, and it suddenly dawns on me that certain Paley sculptures have a wavy line of sorts that could be a look back to that prior era. 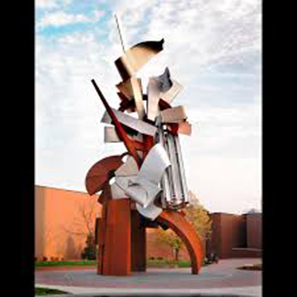 Just at this moment there are several shows of artwork from seasoned professionals that have contributed SO MUCH to our experience of the arts here in Rochester. As far as Albert Paley is concerned,  I don't think that our experience of Rochester would be nearly the same without his gates and towering sculpture and the like.  Along with Albert and Roger Remington we now have a new exhibition at the R.I.T. University Gallery  of the paintings and sculpture of William ( "Bill") Keyser. 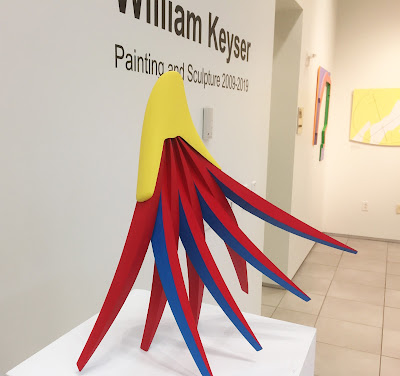 Bill Keyser  also has had a long association with R.I.T. having taught there in the School for American Craft and later as a student earning a Master's degree in painting in the School of Art.  I had the pleasure of working with Bill on his MFA and had the opportunity to watch his work unfold from the more practical applied art of making furniture to the more experimental work that he is now involved with. 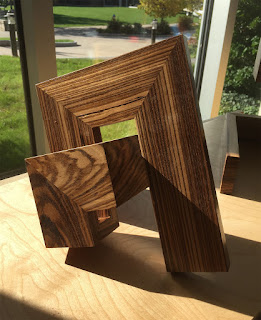 Mr. Keyser seems to have an insatiable taste for experiments in his art that range from the colorful abstract paintings he makes to the equally engaging sculptures that  we find in this large and impressive show. 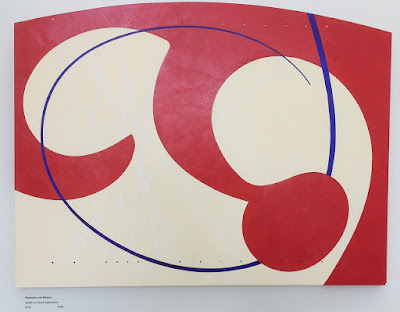 As autumn begins to roll in I also have had the chance to take in a show of three women who have been making really interesting prints for decades, and this is all brought out to the public in their exhibition now ending a long run in the Geisel Gallery in downtown Rochester.  The emphasis is on a vision of a landscape that is evocative, poetic, and enigmatic - all at the same time.  There is striking color - like the encaustic work that greets a visitor at the entrance to the show by Constance Mauro. 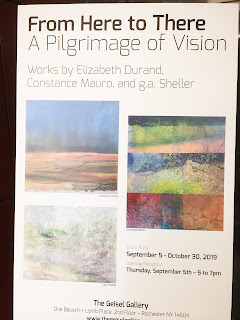 At the Geisel Gallery:
Art by g.a.Sheller, Constance Mauro, and Elizabeth Durand now thru October 30th, 2019 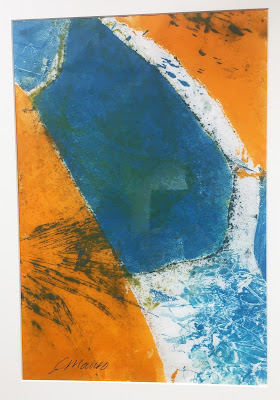 So, take the voyage "From Here to There" and check out the roomful of artwork - many multi-media prints and works on paper by these three artists who have had a long friendship and have really contributed to our community!  Fine Works to see, so check it out! 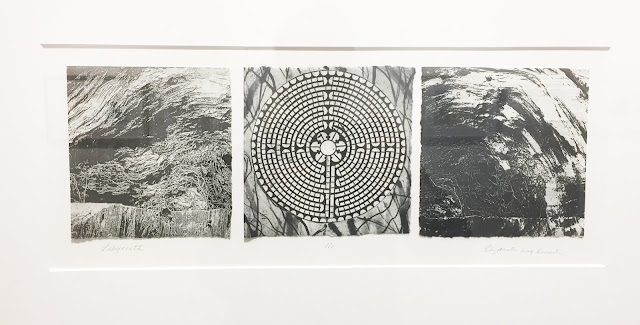