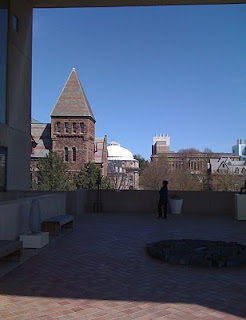 Driving to Buffalo and Back 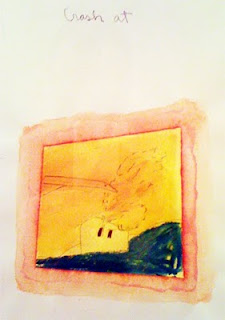 I am driving a car in a recurring dream when I realize my need to stop or turn the wheel, but I can't because I find I'm in the back seat (no one else is in the car) and my feet can't reach the brake pedal. Some anxiety is associated with this, but the overwhelming feeling that I take away from this experience is not one of being out of control, but a feeling of being infantilized. When was I last in a car when my feet did not touch the floor? When I was a child.. This dream is a complex and not so subtle metaphor for some event from my life. In visual art a metaphor could be used to have one image signify another. There is an implicit comparison, just as there is in poetry. This comparative aspect is an organizing principle at work in artistic pursuits (among other things) and seems to run on autopilot in regions of the heart and mind. In the news, researchers are beginning to map out with greater certainty where in the brain our thoughts occur. Which brings me to Guillermo Kuitca, whose exhibition: "Everything, Paintings and Works on Paper" runs through May 30th at The Albright Knox Gallery, in Buffalo. Kuitca conducts his own form of research and diagrams his findings on the walls of the museum. Right away, his art talks about locations where things happen, judging from the seating charts which make up a portion of this show. You know somethings happening, you just don't know what it was, to paraphrase Bob Dylan. Mapping is a hot topic (in some ways more obscure than the amazing Google Maps), with Kuitca you are given locations but you have to supply the substance of what's there. He does this over and over again, and you realize that this is a form of ritual - a human performance with some habitual movements that takes you someplace and later returns you to start all over again. The performative element of this visual art is unlike theatre - the audience does not get to see the painter in the act of creation. So why are all these works of art about available seating? Isn't there a paradox here? The artist takes you to a place, but can't show you what is going on. This sometimes frustrating feeling is compounded by paintings of nearly empty rooms shown in a childlike style that reminds me of the dream I wrote about at the top of this article. Down a long hallway at The Albright Knox, does anyone notice a most powerful tiny drawing from The Dorothy and Herb Vogel collection by Don Hazlitt? Only a couple of square inches, this drawing from 1977 forecasts a plane crash in Clarence Center, New York that I thought about as I drove up the Thruway to Buffalo, in full control of my vehicle.
Posted by Alan Singer at 8:01 PM