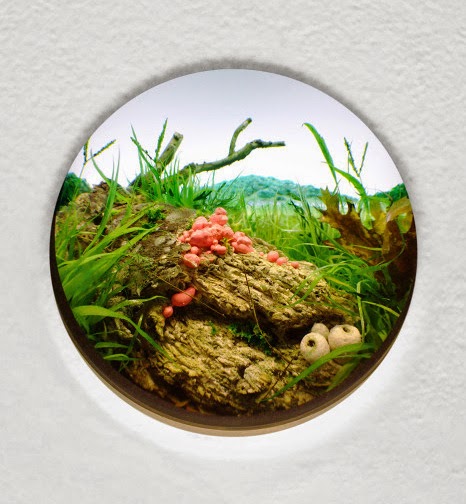 Read about Patrick Jacobs
and his marvelous
art.
(see below )

The visual artist today has their hands full, especially if they are trying to gain some notoriety, trying to approach and hold an audience with their artwork.  Many young artists are skeptical about the normal course of business with representation through the traditional art gallery business model.  They take to the streets.  The attrition rate among artists means that 95% of the likely emerging artists drop away for a variety of reasons.  Student debt at the college or university level is a big killer of artistic ambition!

Other factors are at work in the culture too.  There is a lack of consensus as to what kind of art will make a lasting contribution to our culture as we begin to age.  There is no monolithic touchstone for the modern artist, as there may have been during the days of the Abstract Expressionists years ago.  That was a time when I was growing up, and if you wanted to be a painter, well, your art had to look a certain way for people to pay attention and respect.  It is not that way anymore, he said, thankfully.

But what do we have in its place?  There are few regularly published art critics whose opinions people now follow and whom collectors respect, and today attention is being paid to art as an investment, and the artworld is more like watching commodity futures on Wall Street.

People still attend art school, but what are they learning?  Is it relevant at all?  Some people say that art can not be taught.  Others might say, O.K. just try and teach me something, I have my mind made up, and I know what I like!

This is a link to an article in Hyperallergic  ( a wonderful newsletter which you should subscribe to  ! ).
I was fascinated with this artist's work when I saw it at the Armory Show a few years back.  Maybe, it was all about growing up in the American Museum of Natural History in New York City, and being aware of the great dioramas there.  But if you see Patrick Jacob's miniature worlds, you can start to wonder about what it is you are seeing, and the artist behind it all.
.... 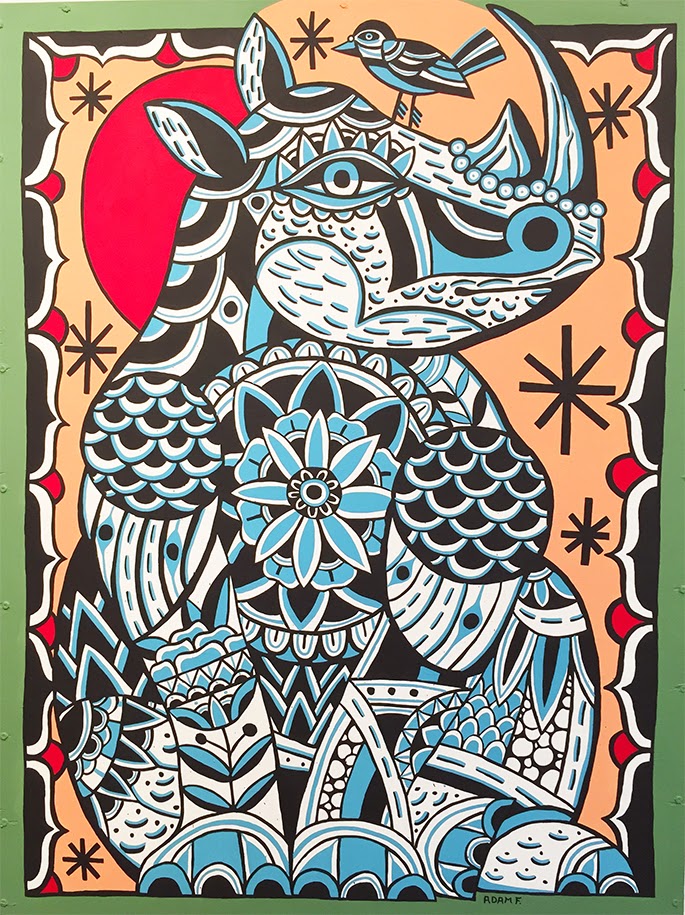 Have you gone over to the new show at 1975 Gallery in Rochester?  Adam Francey was one of my students in the Graduate Painting program at R.I.T. and this is his first major solo show.  This exhibition has over twenty works, most of which are modest in scale and reflect his interest and mastery of the art of Tattoo.  I have been keeping up with Adam's art through his Facebook postings and yet the art on view at 1975 Gallery adds another facet to this budding artist's career.

His paintings remind me of Tony Fitzpatrick's artwork, with strong design elements, flattened planes of color, and ever-present outlines in black.  There is a rise in the quality of Tattoo art and it certainly takes a personal commitment to wear one.  I have been getting posts also from my friend Alex Grey, and he sends images of his art being worn as a Tattoo, so maybe it won't be too long from now before this starts showing up in places like The Museum of Modern Art.  Deal with it! 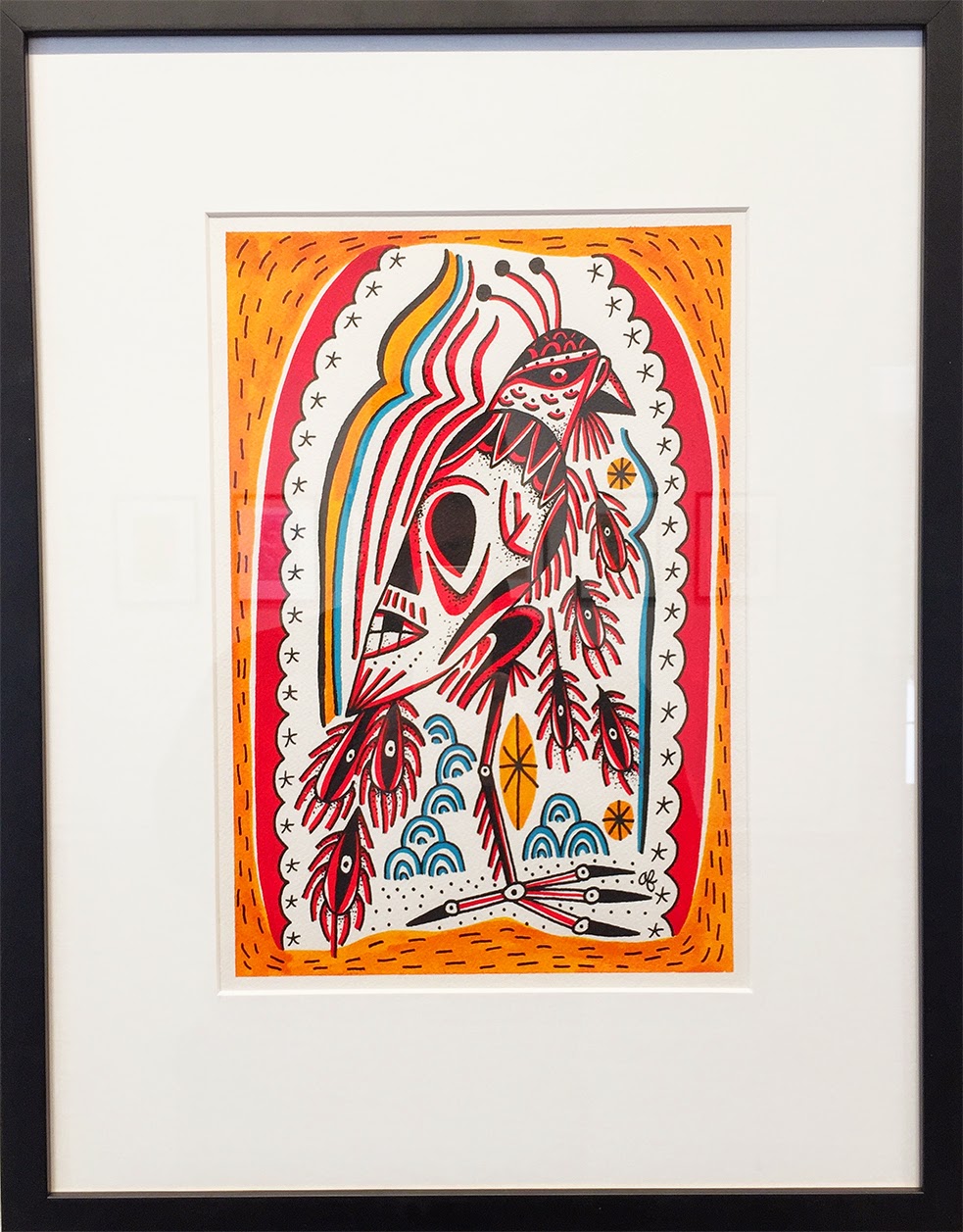 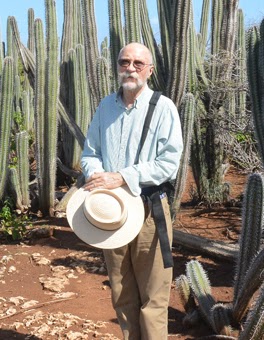 A revolution in fine art printmaking is taking place with much attention towards working with media and materials that will not kill the artist in the process,and a pioneer in this field of Non-Toxic Printmaking has just passed: my friend Keith Howard.  He has inspired many to give up their acid baths and much more and replace it with materials that have much less impact on the artist and the environment.  Keith was a pioneer and I was happy to be able to call him my friend, and colleague at The Rochester Institute of Technology.  He was always full of humor and wit, but this gifted artist was taken suddenly on Sunday, February 8th, 2015.  A question lingers about Keith's early exposure as an artist to toxic printmaking materials and did they ultimately contribute to his death now -many years later?

Keith wrote the book on Non-Toxic Printmaking and built programs in Canada and here in the U.S. - based on his research and ingenuity.  Keith was as much of an inventor as he was a fine artist, and in recent years he branched out into painting and he was also an avid photographer.  But it was his skill at getting printmakers to change their old and bad habits, and strike out for new greener territory that made his contribution important.

I first met Keith Howard as a result of one of his workshops he would conduct in the summers up in Grande Prairie, Alberta, Canada.  I went up there on a vacation to check him out after receiving a few flyers he would send out to printmaking programs around the country.  In 1997 we met, and I began to work with techniques he was bringing to the practice of intaglio type printmaking.

I could tell right away that Keith was a man with a mission, and he had good reason.  There were too many examples of printmaking artists who were exposed to different and dangerous chemicals in one place ( their studios! ) - much more than any other profession.  Acids, kerosene, cancer causing rosins, and toluene were frequently found in old fashioned printmaking facilities ( I know this from the headaches they caused and much more ) - Keith wanted to clean this up.

On my recommendation Keith was hired to revamp the Printmaking Program at Rochester Institute of Technology and he proceeded to renovate the studios to suit the needs of his new direction in graphic art.  I participated in helping Keith relocate, and get him acclimated to our working at R.I.T.  Keith was our guest during his first year in Rochester, so I got to know him ( and his family ).

Keith was already deep into the research for his second major book experimenting with materials that would make the process of intaglio much safer for the students in our School of Art to practice with.
Keith was a funny unpretentious sort and his class was fun, and you learned so much partly because of his enthusiasm for creative work.

He was a world traveller and gave workshops on almost every continent.  Keith has had legions of students who like myself, have changed their ways and been inspired because of his pioneering spirit, and the work he had accomplished.  THANK YOU, KEITH!
Posted by Alan Singer at 3:38 PM 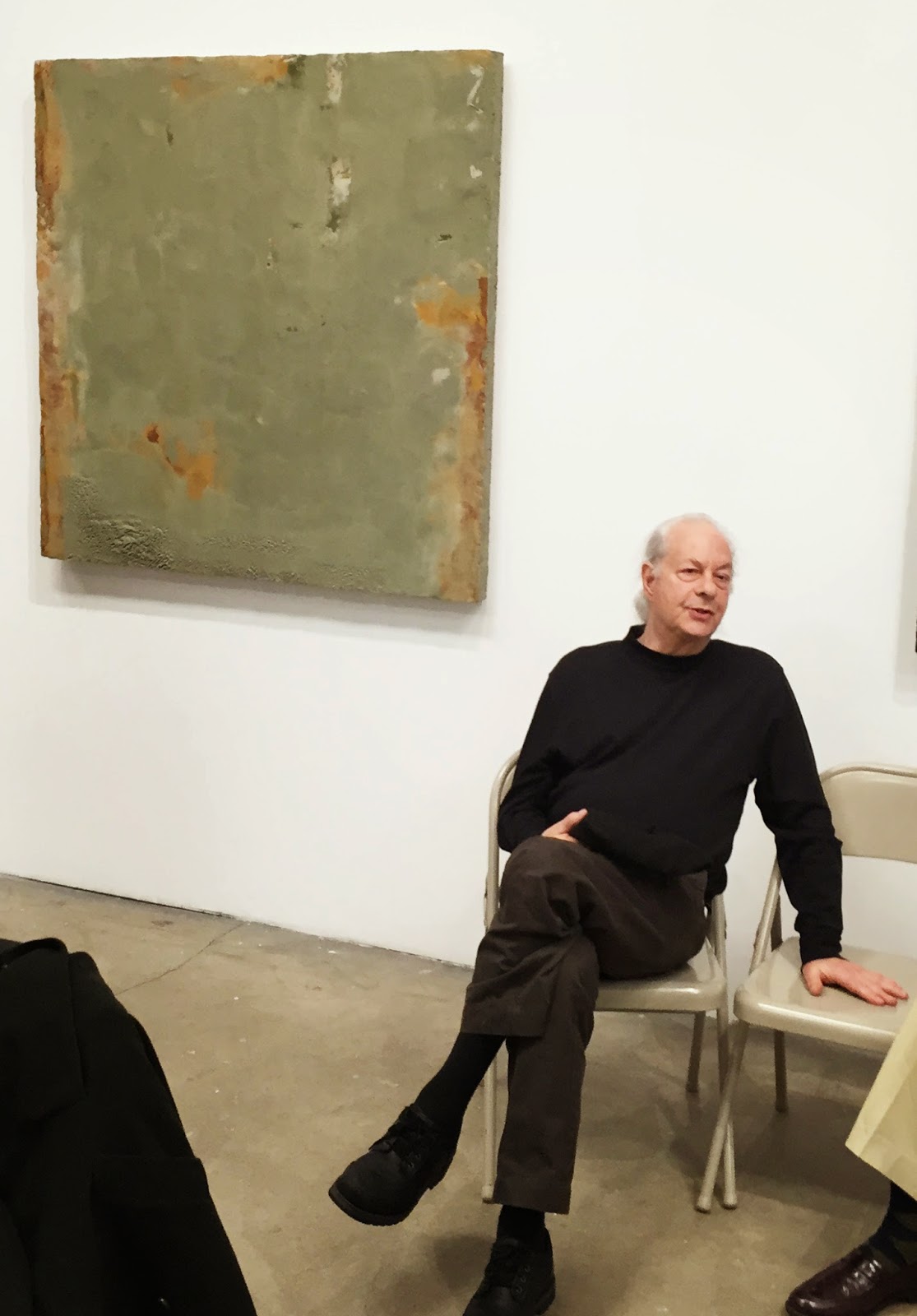 The School for American Craft has many quality programs and a very fine faculty.  Until recently, Richard Hirsch had been a mainstay of the ceramics program but now he has gone on to be named Distinguished Professor Emeritus, and he is also the featured artist in this new installment of "Makers and Mentors" at the Rochester Contemporary Art Center ( 137 East Avenue ).  Along with Mr. Hirsch for this show are a select group of former students who have studied with Rick at the Rochester Institute of Technology, and this group makes for a very diverse and professional looking exhibition. 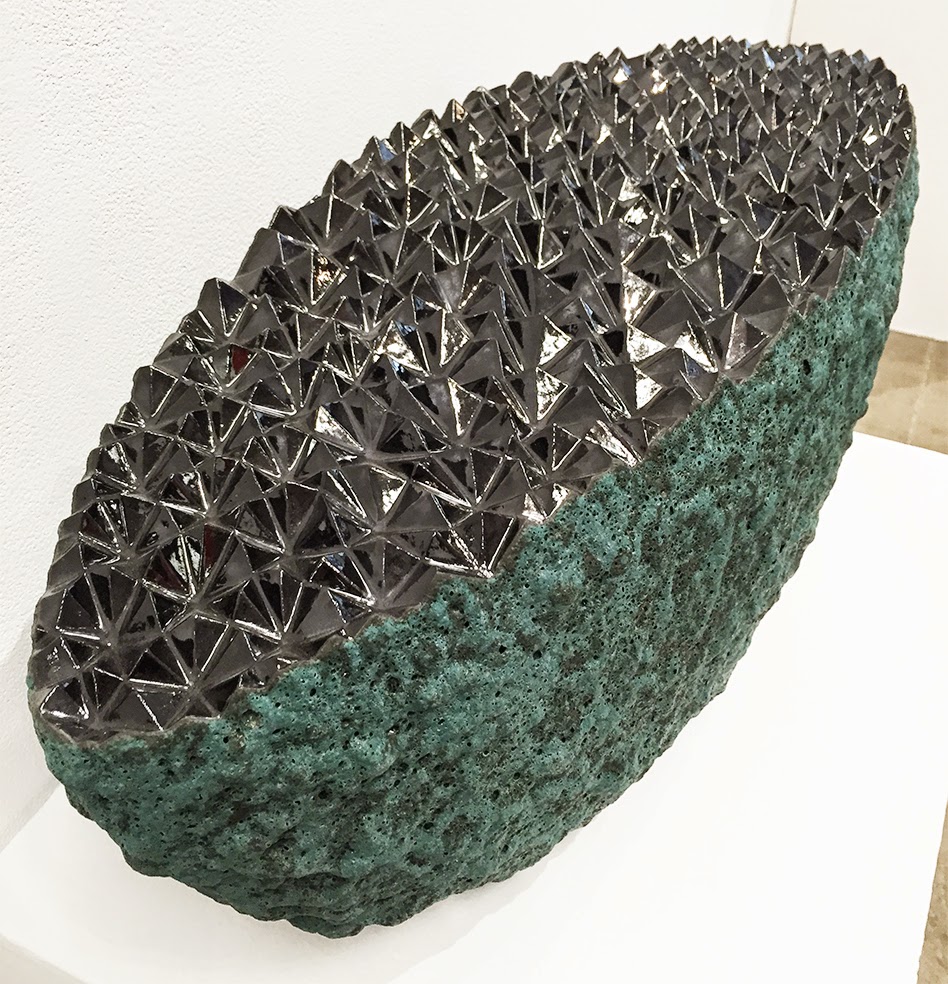 When you enter the galleries you are greeted by some striking forms by Minkyu Lee, and they feature geometric directness and tactile, often colorful surfaces.  These forms are like looking into the inside of a geode - a natural mineral occurance - that is often described as a hollow stone filled with the crystals that grew inside.  Minkyu Lee's works are large simple shapes that look like someone took a giant bite out of them, and as a viewer you are drawn in by your own curiosity - what is it I am seeing?

Richard Hirsch is known mainly for his vessels, that have a chunky, rugged look, and his contribution to this exhibition ( including the selection of the other artists ) is a set of six encaustic paintings along the  wall of the gallery that allows the viewer to make some comparisons and ponder the process that brought about this new direction in Mr. Hirsch's artwork.  What causes an artist with over forty years of experience with clay to switch over to a two dimensional "painted" surface?  Well, it must offer some lingering challenge.. I know in my own paintings, in order to understand the structures better, I often sculpted low relief tiles of terra-cotta to give my hands a new form of knowledge, and I suspect that is what Richard Hirsch is up to.  You can catch up with a new book about his work called "WITH FIRE", a Life Between Chance and Design. 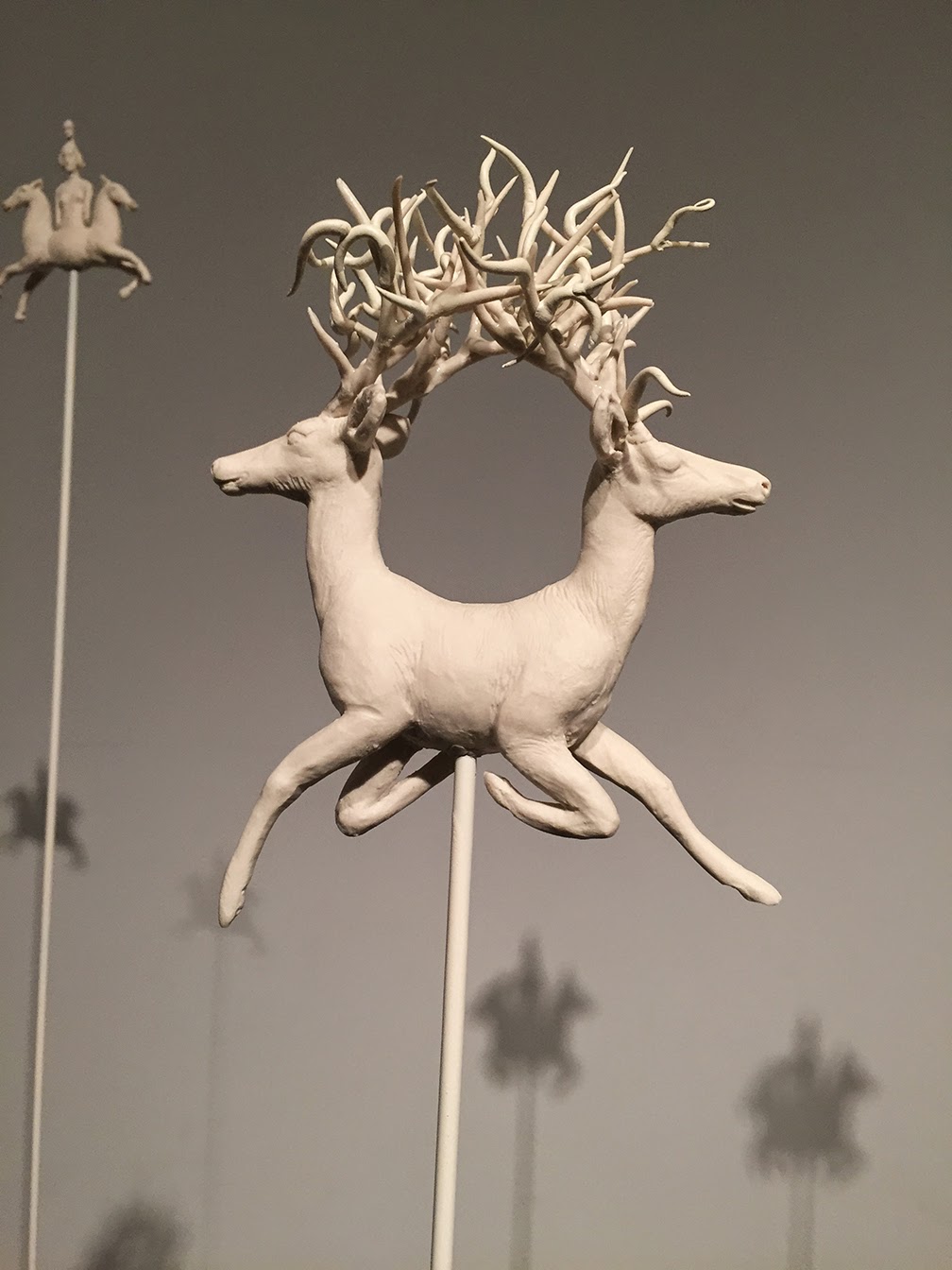 Robin Whiteman in "Makers and Mentors"

Towards the back of the show are figurative works by Robin Whiteman that have the impact of a talisman,  almost prehistoric animistic doll like figurines.  There is a unique combination of animal and human amalgamation going on in these intimate sculptures.  Robin Whiteman said she has been attracted to using clay as her medium since she was 12 years old.  Her feel for the medium is very self assured, and convincing.

Some other artists in this show stood out including colorful works by Liz Howe,  Hojeong Jeong, and Joanna Poag, who gave an artist talk the day after the opening which I found enlightening.  Joanna is a recent R.I.T. graduate and she sees herself as searching for an equilibrium in her artwork in which she finds correlations to music and structures of the body ( maybe ribs? ).  She has one large work hanging in the show ( untitled ) that is first designed on the computer and then hand built from coils of clay and then fired. 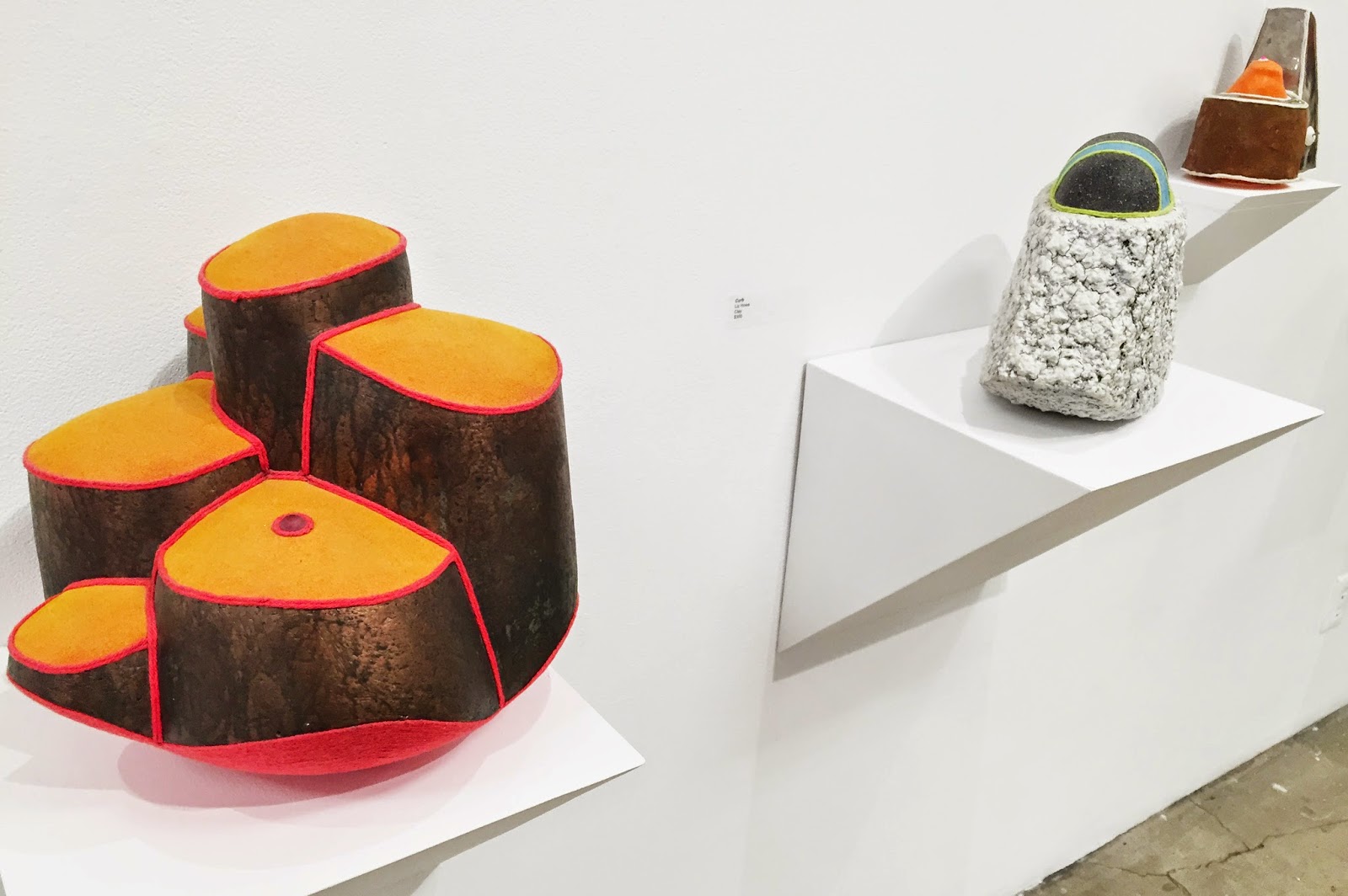 Liz Howe works in "Makers and Mentors"
at RoCo

I was speaking with Robin Cass, who is presently Associate Dean in the College of Imaging Arts and Sciences ( C.I.A.S. ) at R.I.T.  I mentioned to her on opening night that her glass works remind me of the glass flowers at Harvard University and she replied that science including botany was part of her family pursuits as she grew up.  The glass flowers deserve a visit if you are in the Boston area.  Stop in to the Harvard Museum of Natural History and ask for the Blaschka Glass Models of Plants. 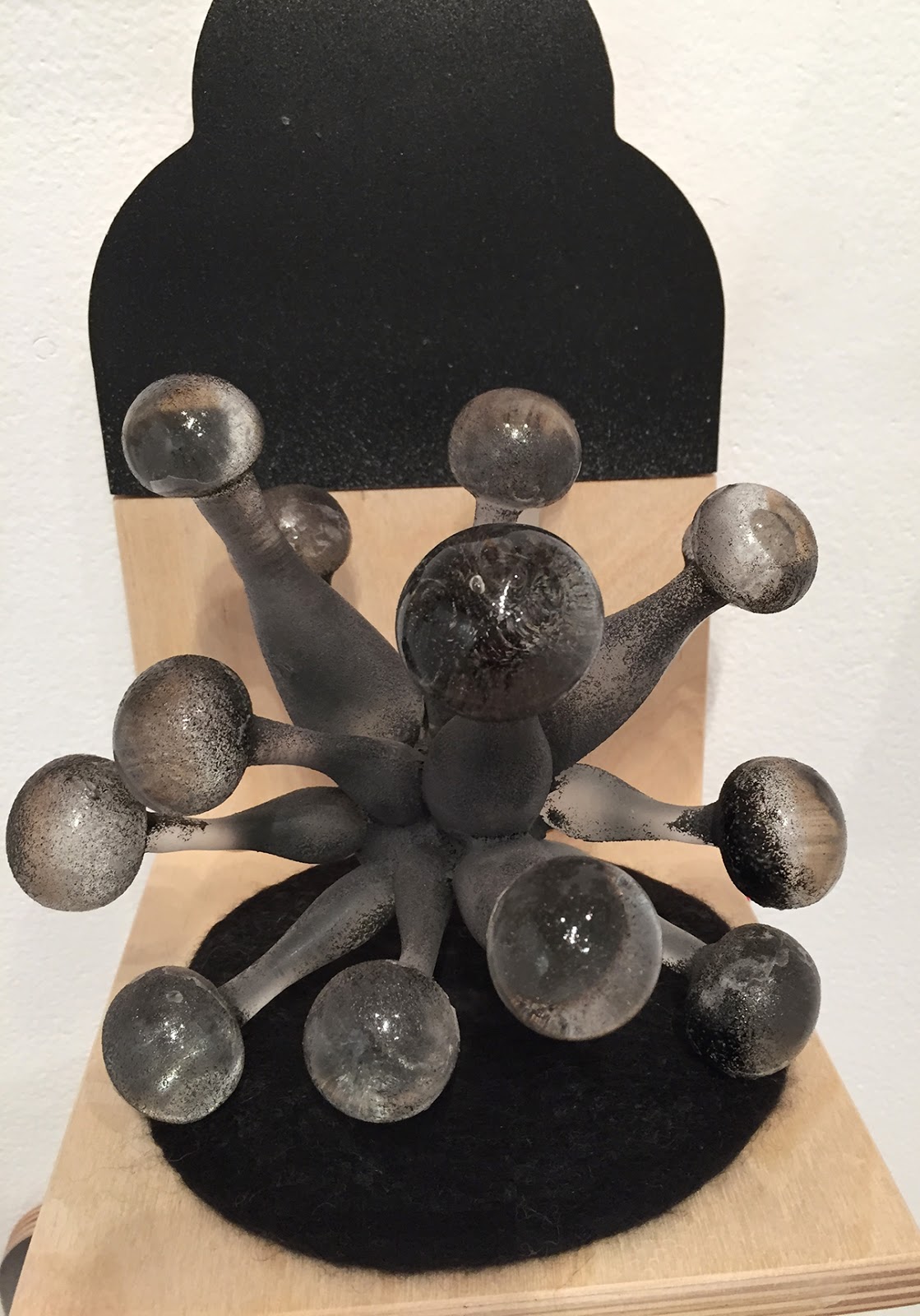 The "foundlings" is the name of Robin's show in the Lab Space at RoCo and it was a collaboration with the designer Bill Klingensmith.  Frosted and clear glass sometimes with a metallic patina caught my attention as I enjoyed the symmetry and the organic nature of Robin's project which she said has been ongoing for over a dozen years.
Posted by Alan Singer at 7:25 PM