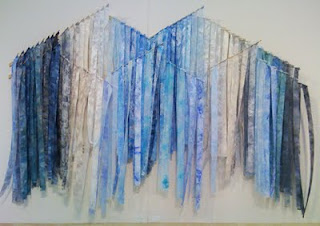 
The NTID Dyer Arts Center is one of the most beautiful places to show art, and no doubt that
Stephanie Kirschen Cole was looking forward to the way her solo exhibition would look when the exhibition opened.

Stephanie had been planning this show for some time and it does look fabulous, but she did not get the chance to see it finally, as she passed before the work was transported to the gallery.  Stephanie had been ill for a while; she was a colleague of mine, and it was only a few months ago that we talked about her artwork, especially in regard to an upcoming exhibition coming to the Memorial Art Gallery in honor of John Ashbery's prize-winning poem "Self Portrait in a Convex Mirror" which I wrote about earlier this year.  Stephanie was represented by the Tibor DeNagy Gallery in New York City, and she had made a few artworks that reflected her interest in this particular poem.

So, it shouldn't surprise a visitor to the show at the Dyer Arts Center, now through August 12, 2011, that Stephanie had a literary bent to her work, which frequently honors philosophers, thinkers like Copernicus and all manner of maps and prints - almost like visiting an antiquarian book dealer - except she is a visual artist who had strong attachments to cultural and scientific artefacts.  Stephanie also was a crafter of hand made papers, and I would consider collage as her metier.


My favorite work in this large scale show is above, the Waterfall which when I visited was mildly blowing in a slight breeze in the room - animating everything and looking very Asian.  In fact, some of Stephanie's art seems to borrow from Japanese kimono/textile traditions in the sense of patterning and muted colors.  I think this work which is made of strips of hand printed ribbon positively dances, and I found it to be extremely sophisticated in its simplicity.

There are certain repetitive concerns in Stephanie's artwork- images are often presented on handmade paper treated with colorfield splashes of transparent color that often frame a geometric shape - which in turn might frame another more detailed object, mask, or tree.  One of her most striking images was a tribute to Acupuncture - a form of therapy for pain employing fine needles, it can be seen on the postcard advertising the show.


In this Tribute to Stephanie Cole's Life and Art a special student recognition award is being announced through R.I.T. and The Foundations Department where Stephanie taught for many years.  If you would like to contribute please send a check made payable to R.I.T. and mail your check to the Foundations Department, R.I. T., 73 Lomb Memorial Drive, Rochester, NY 14623
Posted by Alan Singer at 6:18 PM