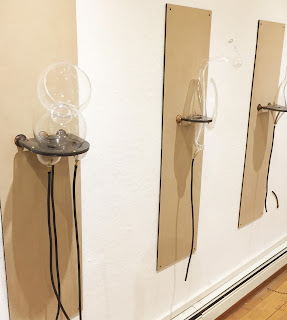 Chenyang Mu presents "Hear You" at Joy Gallery
and
Bevier Gallery at R.I.T.

Chenyang Mu has a mysterious side to her artwork.  You have to listen closely to the sounds her glass sculptures can evoke.  You can brush up against some blown glass forms and hear music, then you can strike a chord on what looks like some glass icicles, and in so doing they can remind you of the sounds of Harry Partch with his invented instruments. 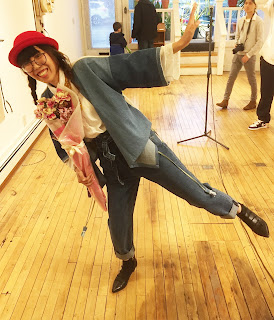 Chenyang Mu has also brought some of her new artwork to The Bevier Gallery where she has a segment of the space to highlight some of her pieces and her process.  Blown glass is only part of her artwork.  Her Thesis revolves around  how sounds can be shaped by the glass forms that you see, and this is artwork that you can hear as well.  In fact some  of this art engages you to become a performer in her process - for example you might blow into a tube to create a hum or a series of notes.

Once a year, Rochester Institute of Technology presents the IMAGINE Festival where the public is invited to come and see what is happening in the various areas - including visual arts, photography and science.  The parking lot was jammed full when I drove up to see what was going on.  Hundreds of people came out on a cool and windy day to check out the show.   The projects are part of the mission of my college to inform and educate especially in ground breaking technical skills and innovative image making. 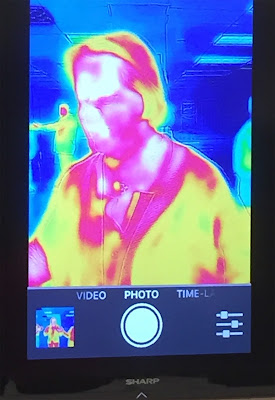 IMAGINE is a Festival of ideas, concepts that also have an interactive component, for example in one studio you could have a thermal portrait of yourself projected up on a monitor.  In another former of that same studio a print was being made by a computerized eye dropper filled with liquid coffee. The image was made with a myriad of fine dots - one drip-drop at a time! 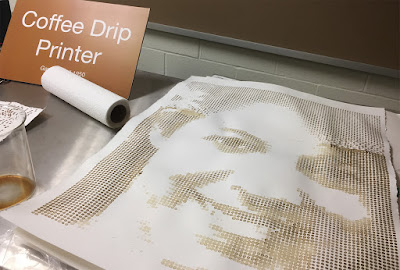 Coffee Drip Prints made on the "spot"

Down the hallway, I met up with one of my graduate students who I have worked with this year on her project she calls "My Experience Manifesto".  Xuechun Wu has created a flexible mural with imagery taken from life - stages of growth  from a young girl, to a teen ager, and beyond.  She writes up the characteristics of the life she lives, and also prognosticates about what she will become - this is a bit of fortune-telling and her project is very illustrative! 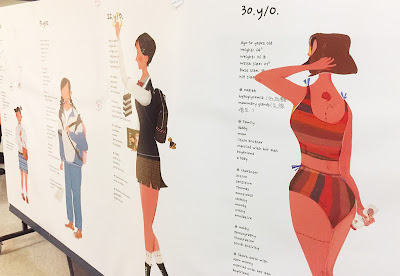 Upstairs, at the Bevier Gallery, I took some time to talk with another one of my graduate students who had a whole other story to tell.  "Tony" Hexuan Cai presents his silk screen images that could represent the birth of the universe.  There is a little baby floating in some of the screen prints, and there is a really creative mind at work here.  The imagery sometimes is repeated with screen prints on glass that can look very architectural indeed. 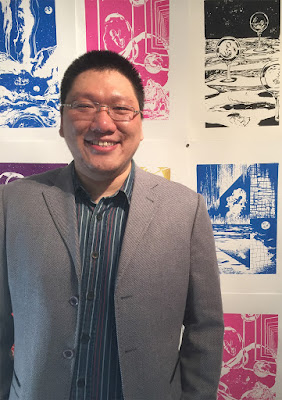 We only scratched the surface of what was being offered during the Festival at RIT.  In the University Gallery there was a whole room full of interesting new Industrial Design work.  Robots, and much more to see, so if you can - take in the shows at RIT and look for the IMAGINE Festival next spring! 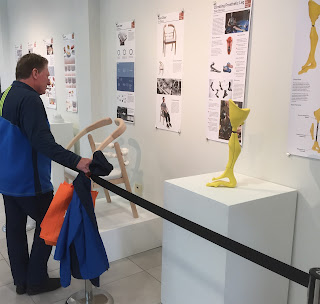 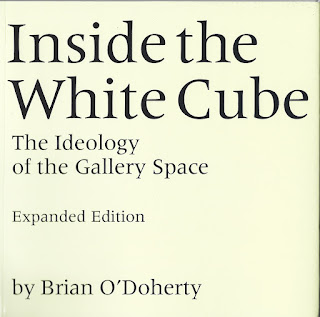 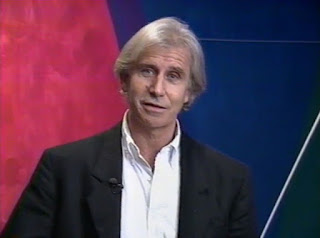 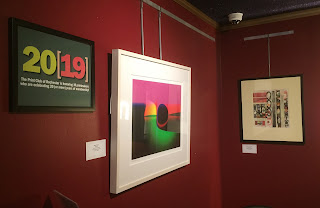 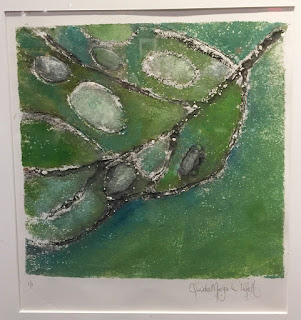 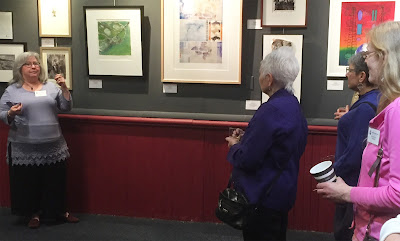 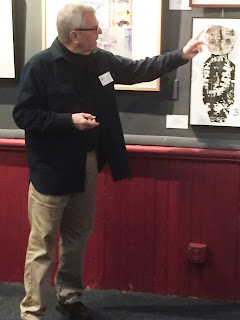 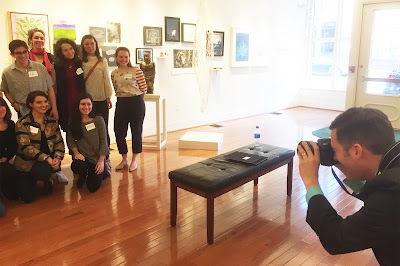 I was driving up from Pennsylvania over the weekend and stopped in Clifton Springs, New York to see what was happening at Main Street Arts.  There was an opening in progress at the gallery that features artworks from 42 artists who have participated in the Residency Program over the past few years.  Brad Butler gathered the artists for a group photograph after he explained to me that Main Street Arts is making a transition towards non-profit status as an institution and they are looking to expand and create more space for visiting artists.  This new exhibition runs into May and from the looks of what I saw - there have already been several sales, the prices for many of the works on hand are very modest! 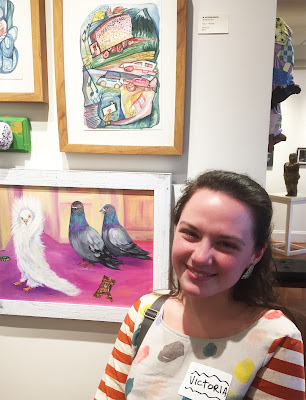 One of the artist residents, Victoria Savka

At this opening I had a chance to talk with two young ladies whose work I found hanging in this big group showing.  Victoria had been a student at Rochester Institute of Technology and as we had a few moments to chat I found out that she is now becoming a teacher for children K - thru -6 at St. Agnes, a local school in Avon.  One of her three pieces that I saw was a kind of a journal entry in way - it comes from her car trip across the county to Colorado and features a Wonderbread truck among other sites like a sign that says "Falling Rocks"....beware! 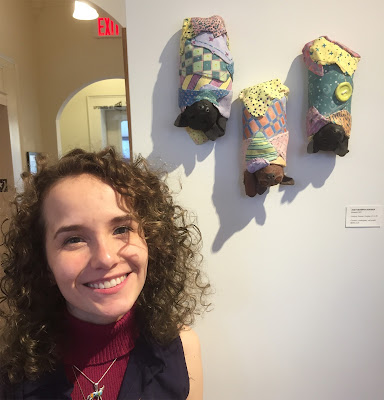 Another artist I talked with was Zoey Houser from Newark, New York.  The ceramic art that she had on the wall here is brightly colored and features three bats looking like they are getting ready for bedtime! 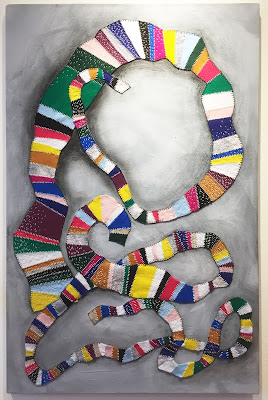 Brad Butler has a bright idea with his Residency Program.  These artists usually come for a one month stay to do some new artwork and to explore our area.  Brad says that they come from all over the country and their artwork represents almost every kind of imagery including holography! ( Look it up! )  This show has a very youthful approach and offers something for everyone......

This past week we were deep into the center of Pennsylvania, in a town named Millersburg near Harrisburg, at a site called The Ned Smith Nature & Art Center, and we are planning an exhibition there.  We met with John Booth who is the Director of the Center, and we delivered paintings by my father, Arthur Singer ( 1917-1990 ) for a show of his work to open this coming June, 15th.  This will be a highlight for an already - very busy year! 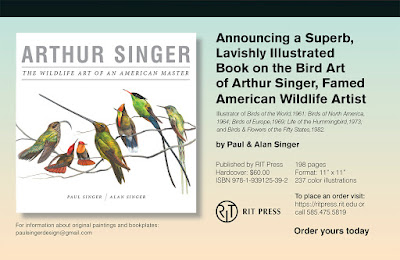 Arthur Singer, the Wildlife Art of an American Master by RIT Press

Our book, which we published through RIT Press is selling well and it has inspired several in-depth exhibitions which have given the public a cross-section of the kinds of artwork that my father became famous for - beyond the illustrations that he made for his well-known field guides.  His bird paintings will be a feature of our new show which will be up in the Ned Smith Nature & Art Center thru late August - if you are near or in the Harrisburg/Millersburg area, come and check it out! 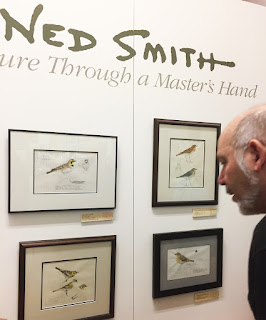 Along with my father's artwork, there is a circulating exhibition of the art of Ned Smith - who was in many ways a colleague of my dad.  Ned Smith had a career that overlapped my father and they both worked for publications starting in the early 1950's.  Ned Smith was a self-taught artist and naturalist who loved hunting and fishing, and his artwork demonstrated his love for the outdoor life. 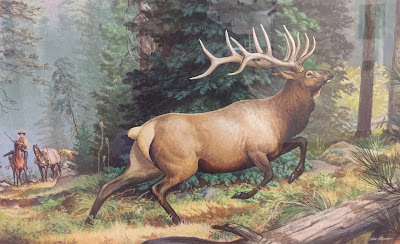 Ned Smith and his paintings of wildlife remind me of the art of Carl Rungius - a painter who was known for his portrayal of big game.  Ned Smith made meticulous drawings for every composition and his artwork features a kind of drama you may witness if you are patient.  I think Ned's artwork deserves more recognition and  here you just have to see it for yourself! 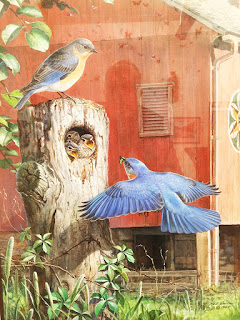