It's more intense than Halloween, the gross mash-up of kitchen supplies and body parts provided by Christine Chin of Geneva, New York.  Her ghastly photos of an anatomical alchemy propelled me through and away from the show called "EAT IT" at Rochester Contemporary last week. 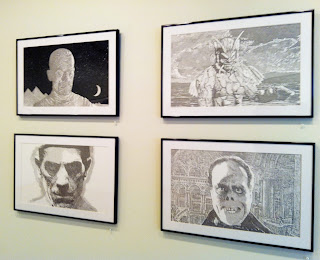 Portraits in pen by
Murray Tinkelman
at The Mercer Gallery, Monroe Community College

Barely, had I turned the corner but I was face to face with a whole rogues gallery of monster portraits by the likes of Murray Tinkelman.  The Werewolf, Frankenstein, Dracula, and Godzilla were all in attendance.  Murray was the man who made all the drawings of those characters that evoke such fear and loathing.  But the show at MCC probably is a turn on for movie buffs, - you have to roll back the tape to remember Lon Chaney, Jr., Boris Karloff and Bela Lugosi doing their evil best.

On view was the painstaking artwork of Murray Tinkelman that mimics the style of old etchings or engravings from books and magazines of a hundred years ago.  Murray also celebrates a career of more than sixty years as an illustrator, and he was someone whom I met when I was constructing a curriculum for the School of Art at R.I.T.  I wanted to know what an ideal Illustration Program might look like, so I went to Murray Tinkelman's class then at Syracuse University to sit in and watch a pro at work.  He made me comfortable there, and we talked about other schools that I planned to visit - in other words Murray was a mensch.

The Mercer Gallery show also featured meticulous drawings by Murray of Coney Island, and all the places one would visit along the boardwalk...  I remember photographing many of the same scenes - Nathan's Famous restaurant, a roller coaster at the Steeplechase, the Wonder Wheel, and the beach -  so much fun!  Murray's drawings are not so much nostalgia, as they are a kind of documentary portrait of a place and a society that just holds on in the 21st century. 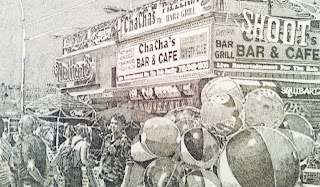 Drawing by
Murray Tinkelman
at the Mercer Gallery, MCC

Up ahead is another gallery show, this time at The Oxford Gallery - featuring 50 local artists who were given the theme of "The Four Humors".  I hope to have something to say about the exhibit in my next post.
Posted by Alan Singer at 2:33 PM 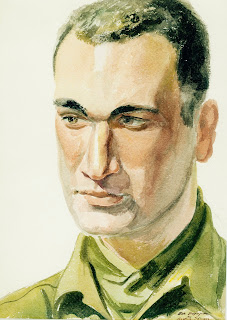 Portrait of Bob Boyajian
during WWll by Arthur B. Singer

My father, Arthur Singer, was a well known wildlife artist who died in 1990, leaving behind a thousand paintings and illustrations and some wonderful watercolors made as far back as the late 1930's (some under very difficult circumstances).  From a naturalist's perspective he knew about the effectiveness of camouflage, the study of which coincidentally was pioneered by another bird artist - Abbott Thayer over a hundred years ago.

My father served his time in the U.S. Army with a battalion of other artists and their operations were keep totally secret.  What did these artists do during the war?  They contributed in many ways which will be revealed in a new documentary special to be aired on PBS this coming May 21st.  Watch for "The Ghost Army - Artists of Deception" on TV that night.

Timed to coincide with the broadcast, a new exhibition has opened this week for a month at The Edward Hopper House in Nyack, New York.  Featured there are some of my father's best watercolors from WWll    ( yes, he brought a set of watercolors to war and some fine Whatman paper too! ).  You can read a review that was just published in the New York Times for this show, here is the link: 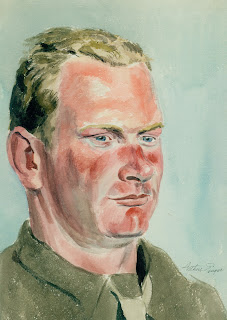 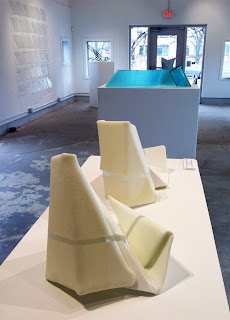 Every now and then,  I get an urge to go and see something new          ( actually, this happens every day! ) and I am out of the studio in search of that certain something.  In the midst of planning for a showing of my own artwork at The Little Theatre later this week, I walk down the street to deliver a card to the 1975 Gallery at 89 Charlotte Street in the former home of the Little Bakery ( I was a frequent customer there ).

I had been meaning to go over to this new gallery that has been open for almost a year and check it out.  So, it was my surprise to find a gorgeous gallery space with a serious show of glass works from Karen Mahardy.  Talking with Erich Lehman, the owner and director, about the gallery and how it fits into the cultural scene in Rochester was very illuminating.  Erich has been a nomad - having staged shows in various locations in town - and he recently has garnered some great publicity for his involvement in wall mural projects here in the city.

Back to Karen Mahardy's show - she has been working with sheet glass that has been shaped and folded to make a very unique kind of statement.  In some pieces the glass looks like a starched shirt collar with a textile pattern - very ingenious!  In other artworks she reminds me of Donald Judd, the minimalist sculptor whose SoHo studio is being turned into a museum.  Her show is very tasty, and I recommend that you get over there before the show is over, especially because this work has so much to offer. 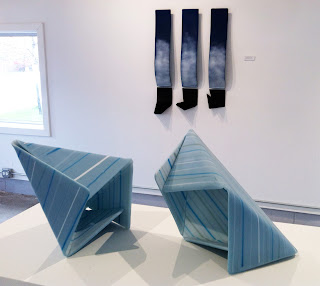