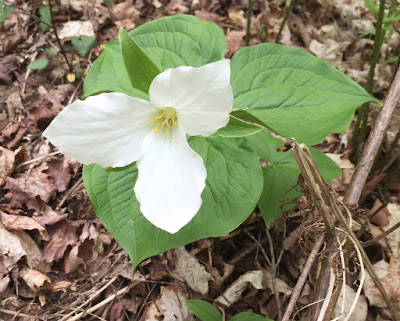 I kneel down to inspect the Trillium, blooming in the woods of Brooktondale, just outside of Ithaca, New York.  I have a day to revive myself after my classes are over for the semester at R.I.T. where I am a Professor, in the School of Art..  I have been teaching studio classes, and my Business Practices class for nearly 3 decades, and now I enjoy getting out into the woods just feeling the warm breeze as a welcome to summer, which is definitely on the horizon.

We visit the Herbert F. Johnson Museum of Art on the Cornell University campus to see what they have in store.  In one of the main galleries there is a show of printed scrolls and two large installations by the artist Rikrit Tiravanija.  This work of art reveals itself slowly, with the aid of a large video screen which you are welcome to sit and admire      ( and ponder the meaning of this artwork ). 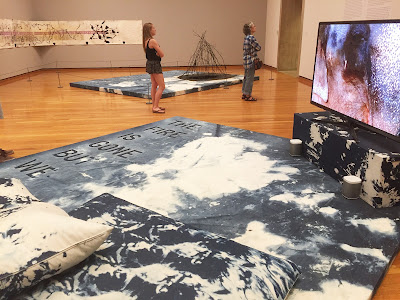 "The Fire is Gone, But We Have The Light"
Rikrit Tiravanija
with Korakrit Arunanondchai

There is always something to see, - and there is something for all tastes at the museum.  When I think of the installation by Rikrit Tiravanija, I can connect with the title of the piece "The Fire is Gone, But We Have the Light", and I view the scrolls unfurled on the wall as part of a diary kept by this artist who is always on the move and who has a penchant for making big statements.  In this instance the artist has the help of graduate students in printmaking to create the edition of large scrolls, and the videos of tourist spots in Thailand complete the project.  The message I get is about movement, choice, and in fact the scrolls are given the title " The map of the land of feeling".

In theory a large work of art such as this should give me some insight into the artist's state of mind, but in this case, I was left with questions regarding my own decisions and sense of direction.  Downstairs in the lower level galleries the art and photography on view did not leave me guessing. 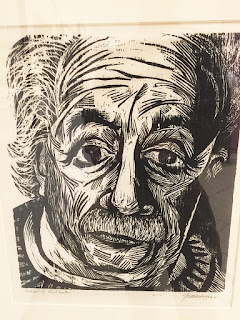 In one gallery we were given a window on personality, celebrity and social order, and this exhibit borrows something from Andy Warhol who said, "In the future, everyone will have their fifteen minutes of fame".  This show consists mostly of photographic images, but there was one very nice woodcut by Antonio Frasconi ( donated to the museum by Roz and John Goldman ) and it is a portrait of Einstein, there is also a screen print by Warhol of Jackie Kennedy titled: "Jackie lll. 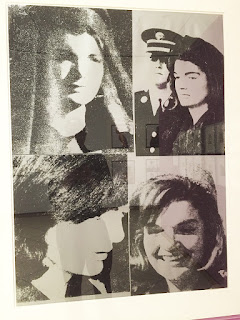 The abstract murals downstairs on view at the Johnson Museum came to light when Cornell Tech started to develop the southern part of Roosevelt Island, along the East River in Manhattan.  The murals are being conserved and they had their origins during the era of the WPA    ( Worker's Progress Administration ) in the early 1940's.  Among the artists included in this show were abstractionists like Ilya Bolotowsky whose mural has been restored recently. 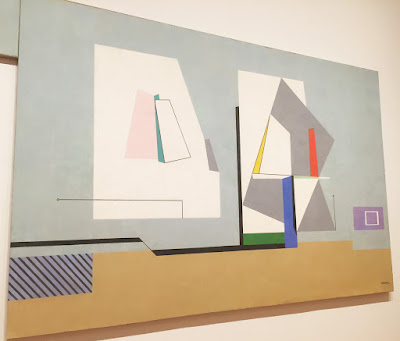 I found some wonderful ceramics from the middle east, and the remarkable thing is how old they are, thought to be between 1200 and 900 B.C.  I wonder whether these are just routine works, or were they significant for some reason, especially the red boot. 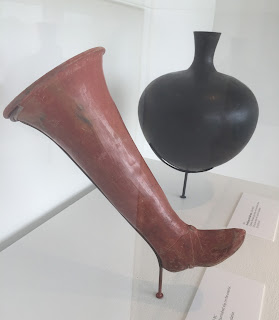 Of more recent vintage were three figurative sculptures of working men.  These guys were under a lot of pressure, they are compressed and distorted and they are the work of the artist Yi Hwan Kwon and they look as if they had all of their details correct except everything is under a different perspective or else it was created through a 3-D printer.

On the way out of the museum I was surprised by a really terrific creation made of nails hammered into wood in a centrifugal pattern and sanded down into an abstraction.  I don't think I had ever seen anything like it, and we left the museum with a real boost from this work by the Korean artist Lee Jaehyo. 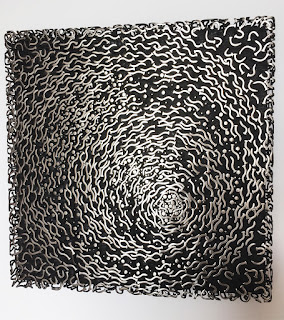 On the upper floors of the museum you get panoramic views of the surrounding town and country of the Finger Lakes and especially Lake Cayuga.  These stunning views are always lively, and if you walk around to the other side of the museum facing east you look out on the Arts Quad of Cornell University, and I can even see the windows of my old studio there. 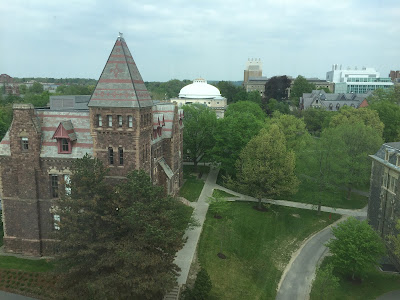 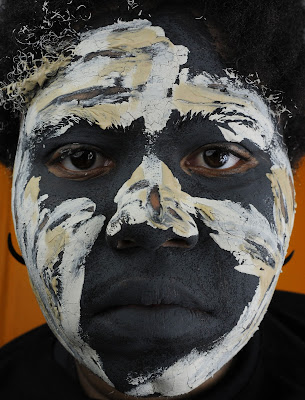 We have a very diverse population of students at Rochester Institute of Technology and the Fine Arts Studio program is no exception.  My student Shwanda Corbett has completed her undergraduate years here and is going on to make her career, starting with graduate school  at Oxford, in Great Britain.  This week her story went out in the newspapers, so here is the link so you can read and learn about her achievements and her determination...she knows no bounds!
Here is the link to her article this week in USA Today:    http://www.democratandchronicle.com/story/news/2016/05/12/rit-artist-shwanda-corbett-oxford/83869656/

I teach a wide variety of courses at R.I.T. and that includes studio courses as well as a Business Practices for Fine Artists course which helps students find their way towards success in the arts.
My Digital Art / Printmaking course has been very popular, and there we work  towards an integration of the art one can make on the computer and tablet - with the ability to make mono prints and editions in the Printmaking studio.  Below is an example of one print by "Tony" Cai Hexuan and it is really a good example of taking the digital tools and making something complex and interesting as a print. 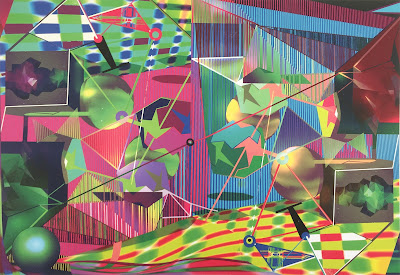 In another part of the college, I teach a course in Zoological and Botanical art and students practice their skills in portraits of live birds which are brought to my classroom by the group Wild Wings.  I have been teaching this course for many years, and it is still exciting to work with the animals and plants in this branch of art that is related to science.  Before I came to teach at R.I.T. in the School of Art, I worked for publishers and my subjects were drawn from nature, just as my students are doing in the photo below. 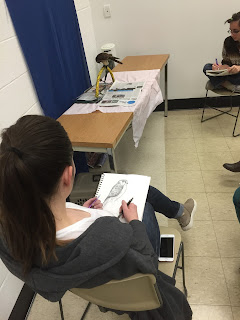 A Kestrel poses in my class at R.I.T.
Posted by Alan Singer at 9:36 AM 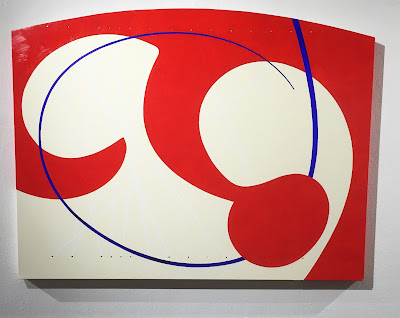 Bill Keyser at
"Myths and Mythologies"
thru June 11, 2016
Oxford Gallery

Spring is here, and the Magnolias are blooming on Oxford Street as I walk into the Oxford Gallery for a look at the current show "Myths and Mythologies"  which runs thru June 11th.  I was invited to participate by the Oxford Gallery owner Jim Hall, and so I was happy to provide a recent mono print for the group exhibition which features over fifty artists showing their creations.  You could write a book about this show - there are so many angles on the concept of "Myths and Mythologies".

It is not like other group shows with a theme because the interpretations are wide open, just look at Bill Keyser's take on the Romulus and Remus story ( above ) or Jappie King Black's " Harpy". 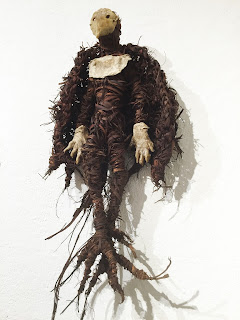 For my part in this visual feast, I created a mono print using some unusual elements based on my research into mathematics.  I created shapes and placed them on an open horizon, protected by a lighthouse which in my mind is the threshold not only to the sea, but of the underworld ( Hades ).  My print is called "The Un-invited Guest" and it features a kind of Jack-in-the-box ghostly figure which is the visualization of a mathematical equation, and that is the form it takes. 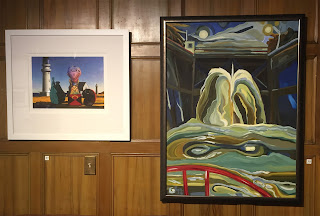 Hanging next to my print is a painting ( Angel of Lock 32 ) by Phyllis Bryce Ely, and she animates the waters flowing into or out of our local Erie Canal lock.  As I said, the interpretation of the theme is wide open to your imagination.  There are some images that are quietly gorgeous such as Barbara Fox's charcoal on paper of "Cupid and Psyche" which is in itself a quote from the famous sculpture by Canova. 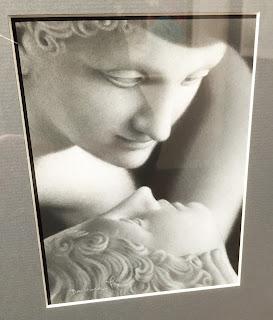 Fran Noonan has a lovely imaginative piece showing a cathedral rising out of the limpid waters of a lake ( La Cathedrale Engloutie ) which itself is an image inspired by the music of Claude Debussy.  Around the corner from this placid work is a painting by Amy McLaren called "I Am Atlas" which portrays the artist as the star of her own action thriller.

Not many artworks in the show are as quietly beautiful as g.a. Sheller's butterfly art she calls "Transformation of Etain".  This work leaves one wondering how the image was created - is it a print or a painting or both?  Go see this show and you will find something that will resonate - and maybe cause you to think about your own beliefs and thoughts about "Myths and Mythologies".
Posted by Alan Singer at 8:57 AM 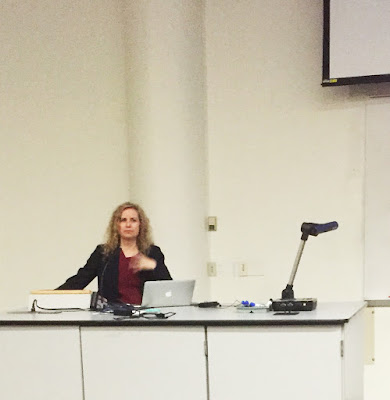 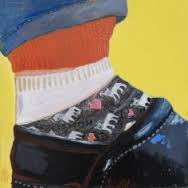