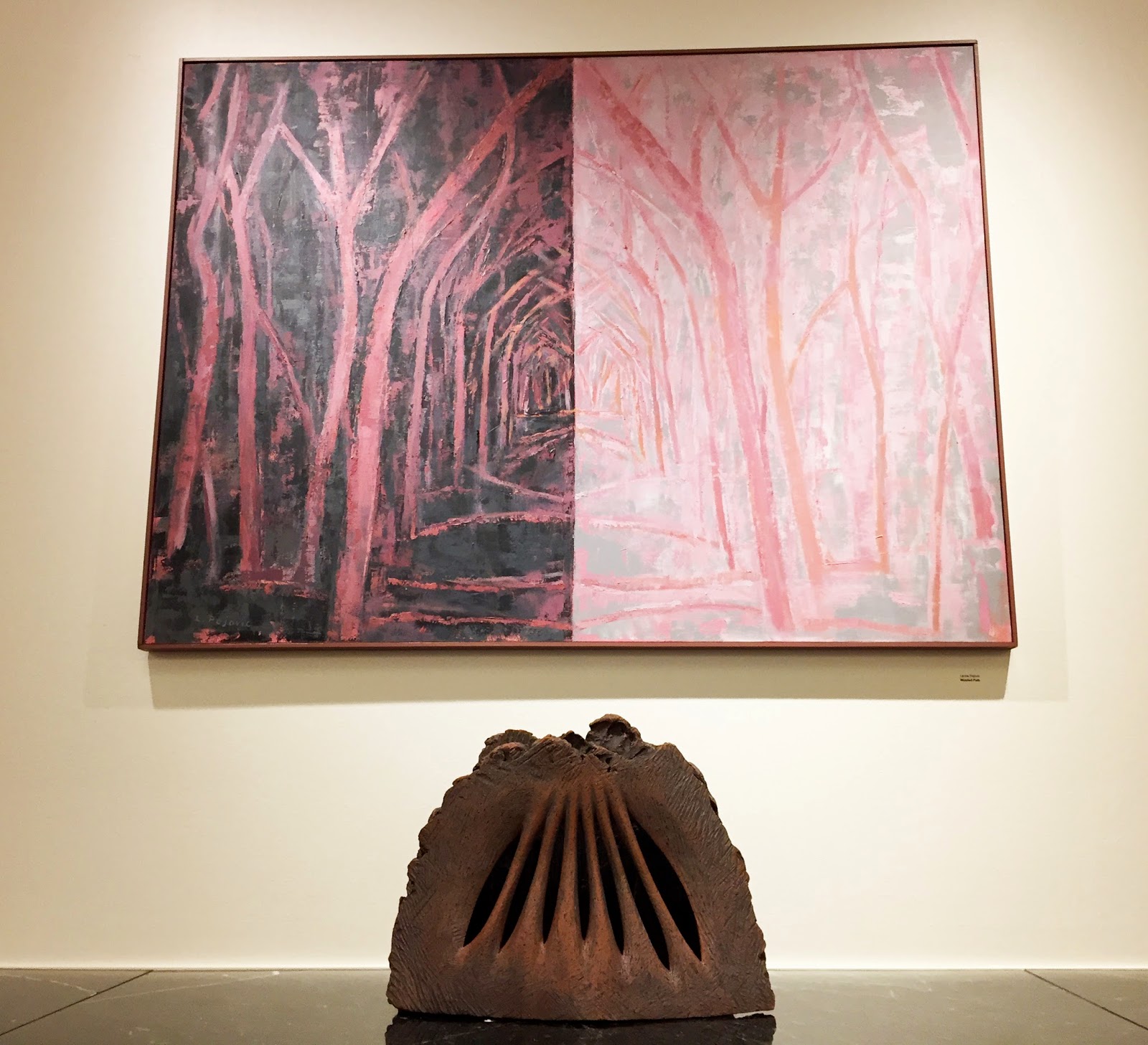 An antidote to all the hoopla, news cycles, and churning of anxiety can be found in a quiet place, at a show of artworks by brother and sister, Dejan Pejovic and Lanna Pejovic, now on view at the Geisel Gallery in the Bausch & Lomb Building in downtown Rochester, New York.  I've known them both for a few years, and I am always engaged when I see their shows because they forge ahead on their own path, which is one of serious contemplation and a relationship with developments in the history of art that is not afraid to look back while moving forward. 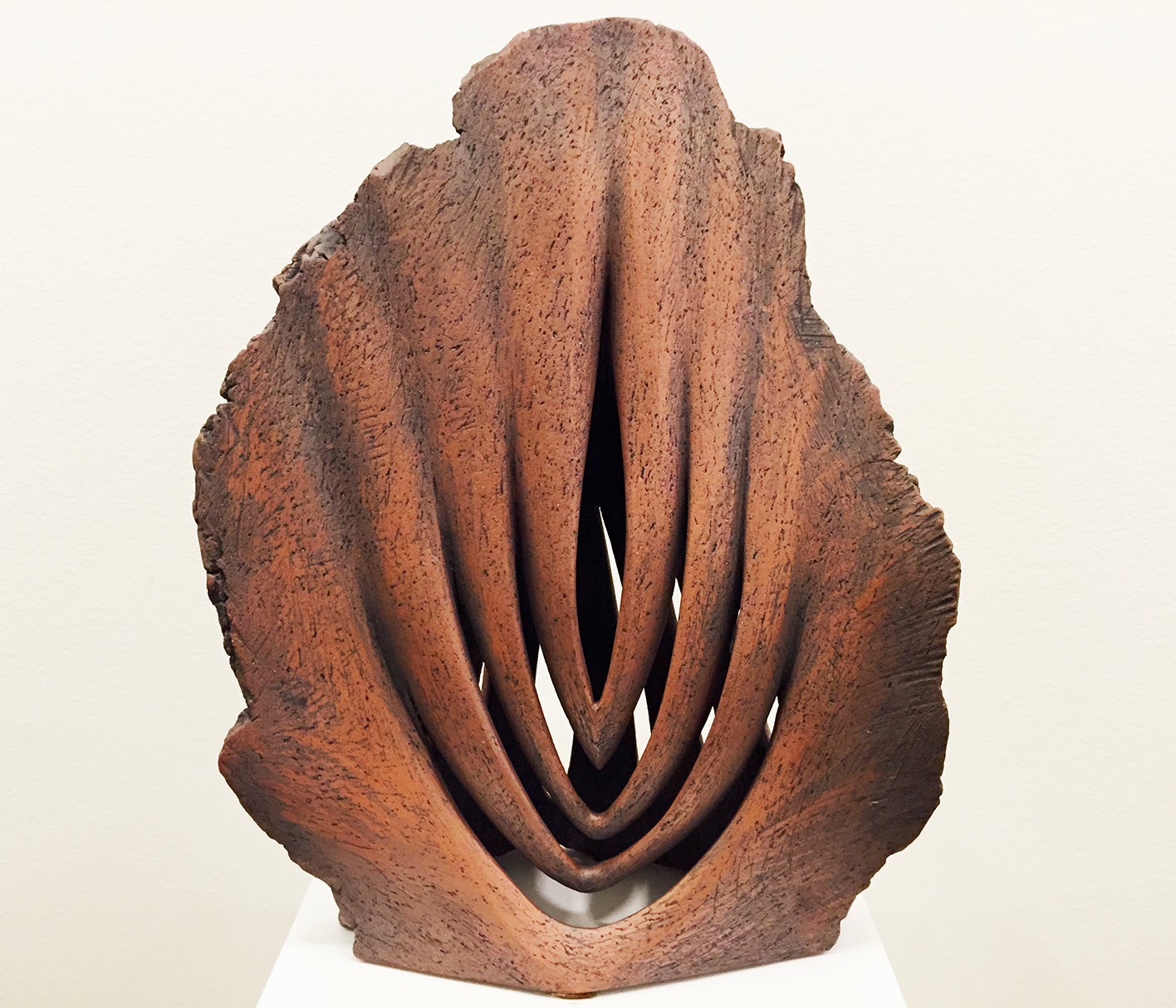 The title of the  show is "RELATED" and that can be because they are, and because their art is like a dialog about structure, texture, and color.  I think that is the first thing that you can apprehend - that structure here seems to be paramount - the form that these works take, whether it is in terra cotta as are all of Dejan's works in this show or painting - as all of Lanna's - the form reigns supreme.  The textures of terra cotta in Dejan's sculpture seems to be mostly uniform, as smooth as an orange peel, while the textures of Lanna's paintings are more ambiguous - rougher here; more translucent there. 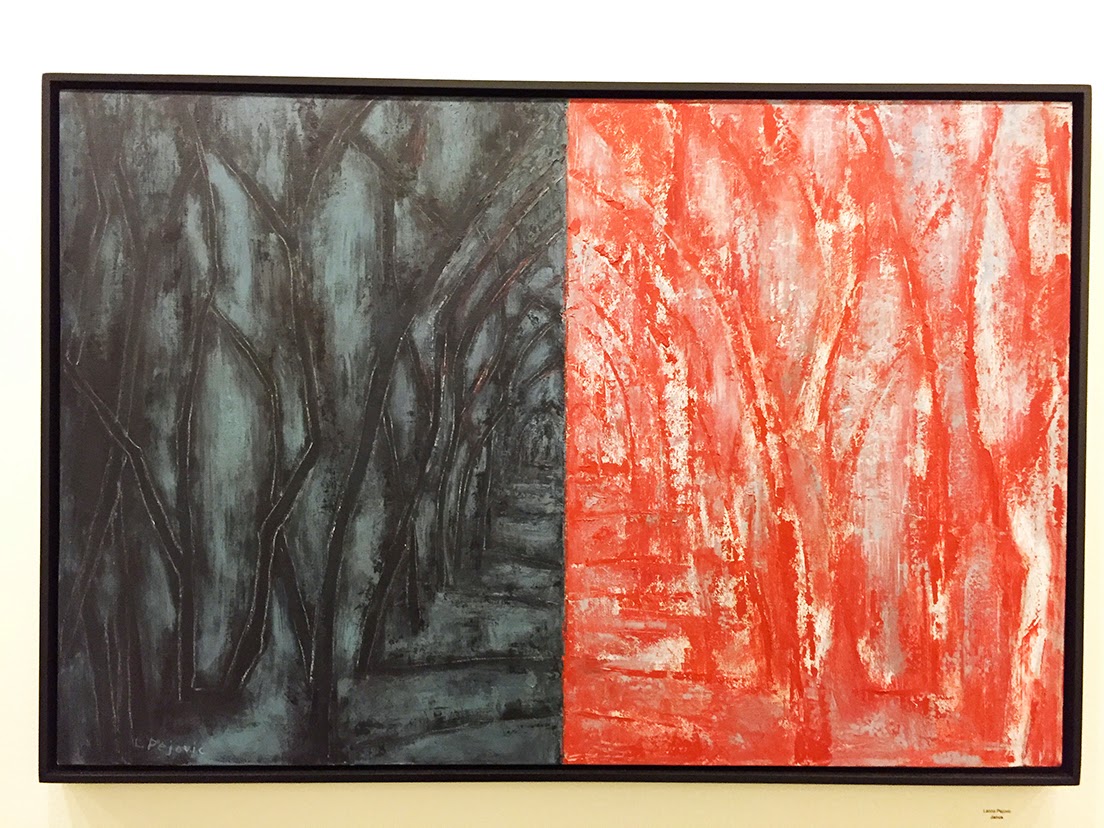 Lanna Pejovic at The Geisel Gallery

Reverence may be a word that comes to my mind, and in that way Lanna's paintings act in a contemplative fashion like a quiet walk in the woods, maybe in nearby Mendon Ponds Park - but the paintings are not too specific.  In fact, Lanna's painting has a quality somewhat like Mondrian - when he was shifting away from representational art and heading into abstraction. 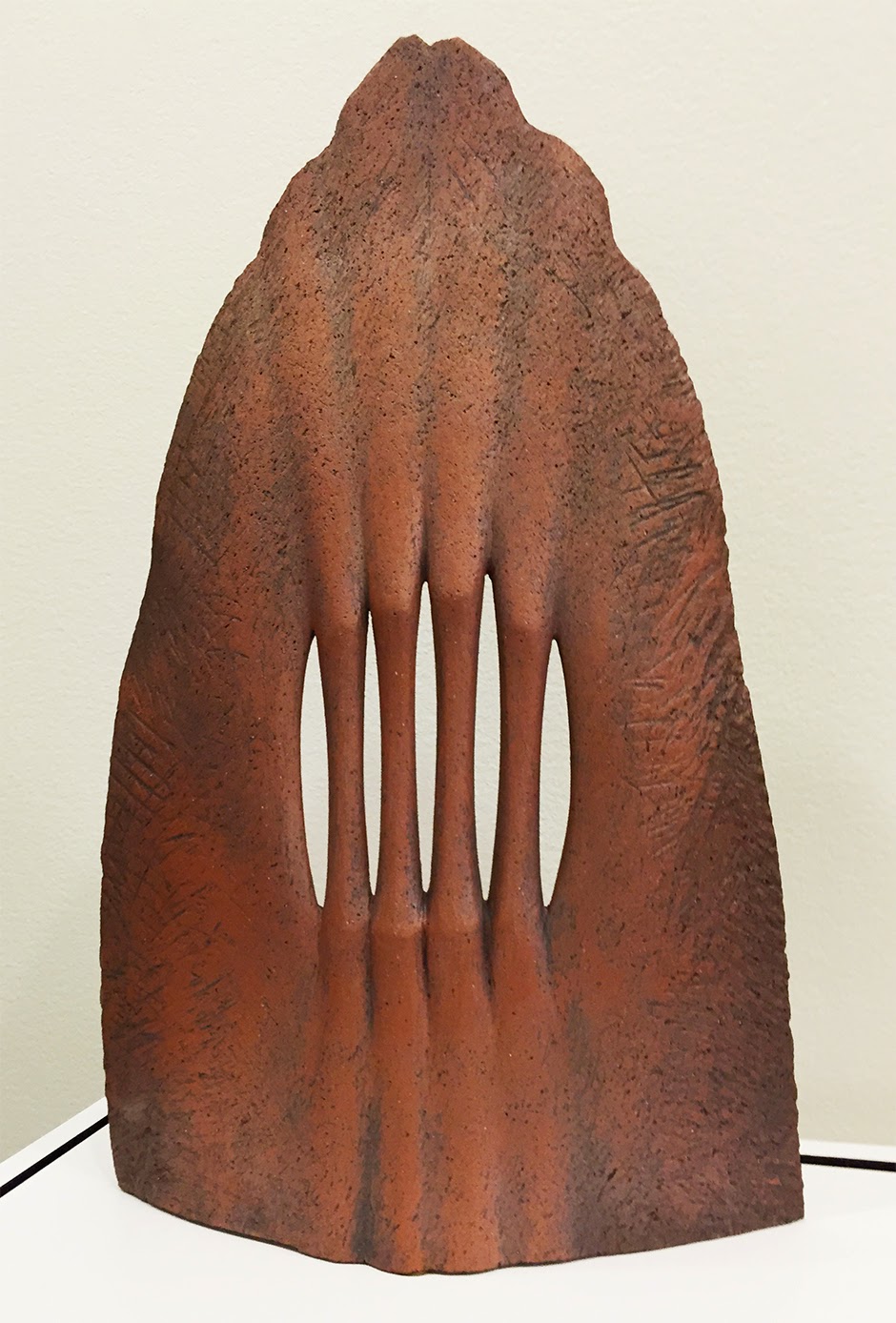 Dejan's art is much more architectural and I would love to see some of these pieces built at a much grander scale.  At the Geisel Gallery show ( which runs through March 26th, 2015 ) finger-like forms look like hands in prayer, and at the same time could be ribs or sea-forms found in tropical waters.  Both Lanna and Dejan have been making art in this area for many years and their sense of purpose shows. 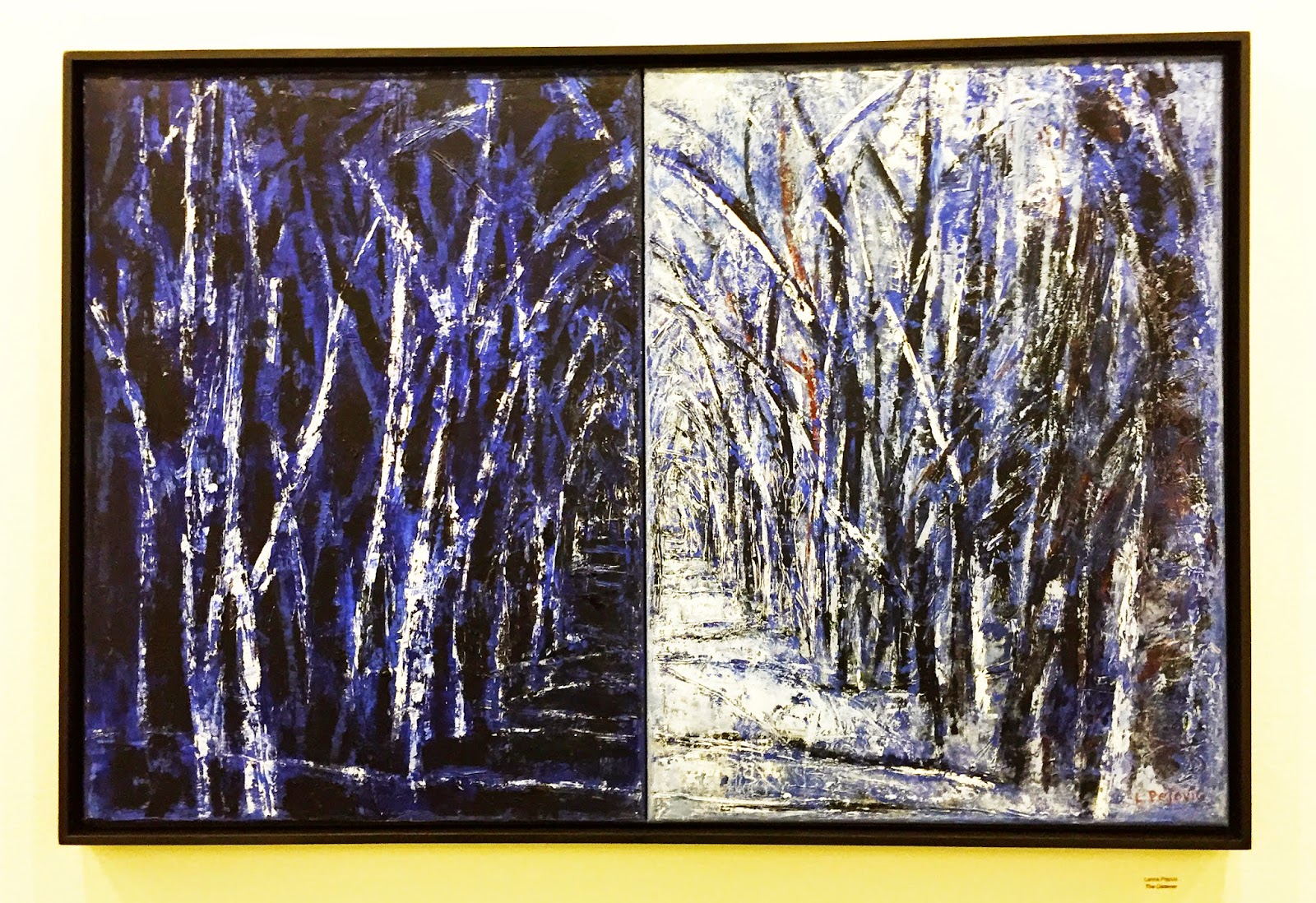 Art like Dejan's "Pneuma" and "Window" are thought provoking and all of his sculptural objects are beautifully made and very attractive.  Lanna's "Wooded Path" paintings draw the viewer closer, and frequently set up a dichotomy - a light and dark panel together, a warm and cool panel, and they have some significance.  Lanna says, " I like using the landscape and turning it into a thing of the mind".  She plays with notions of past and future, night and day, life and death, all subjects that resonate with artists of the caliber of Dejan and Lanna Pejovic.
Posted by Alan Singer at 2:44 PM 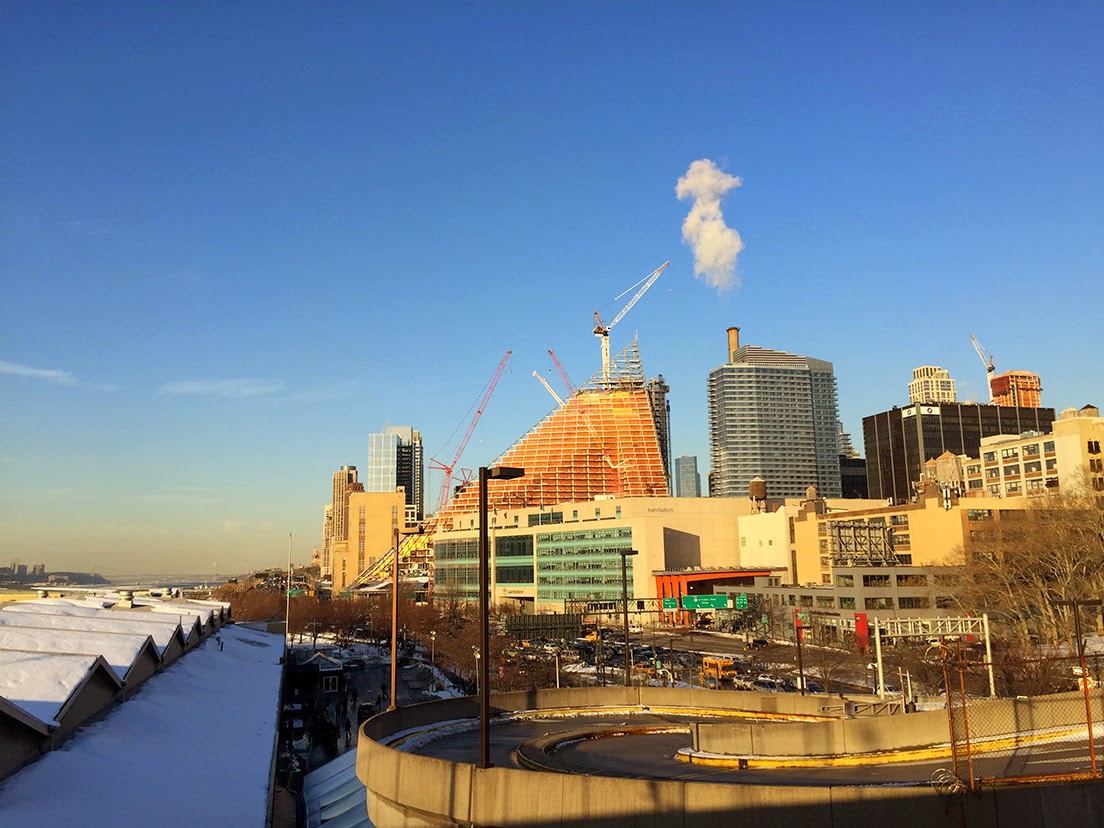 Parking for The Armory Show
looking up the West Side Highway
March, 6, 2015

Driving into Manhattan, on the West Side Highway, the traffic is backed up going in the opposite direction and I am greatly relieved that it is not me stuck in traffic!  The pace of new building continues unabated and the new construction will radically change the look along the Hudson.  I park my car and go into The Armory Show, which is bustling.  There is always so much to see and we walk down into the Contemporary section and dig in.  Not two minutes into the show we come upon a contingent of Rochester natives, including Bleu Cease and RoCo supporters on a junket. 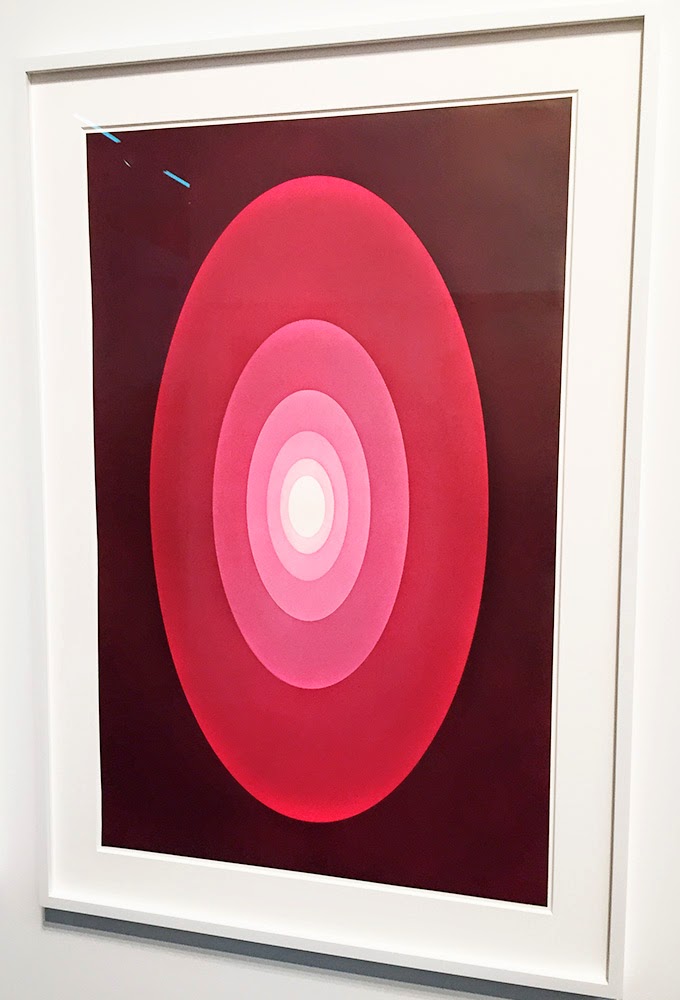 We move on, and at Pace Prints I came across a suite of prints from James Turrell who is usually known for his expansive light shows like the one that recently took over the rotunda at the Guggenheim in New York City.  The simple elliptical form he produced for these prints is very celestial and it reminded me of nebulae out in the great astronomical outback. 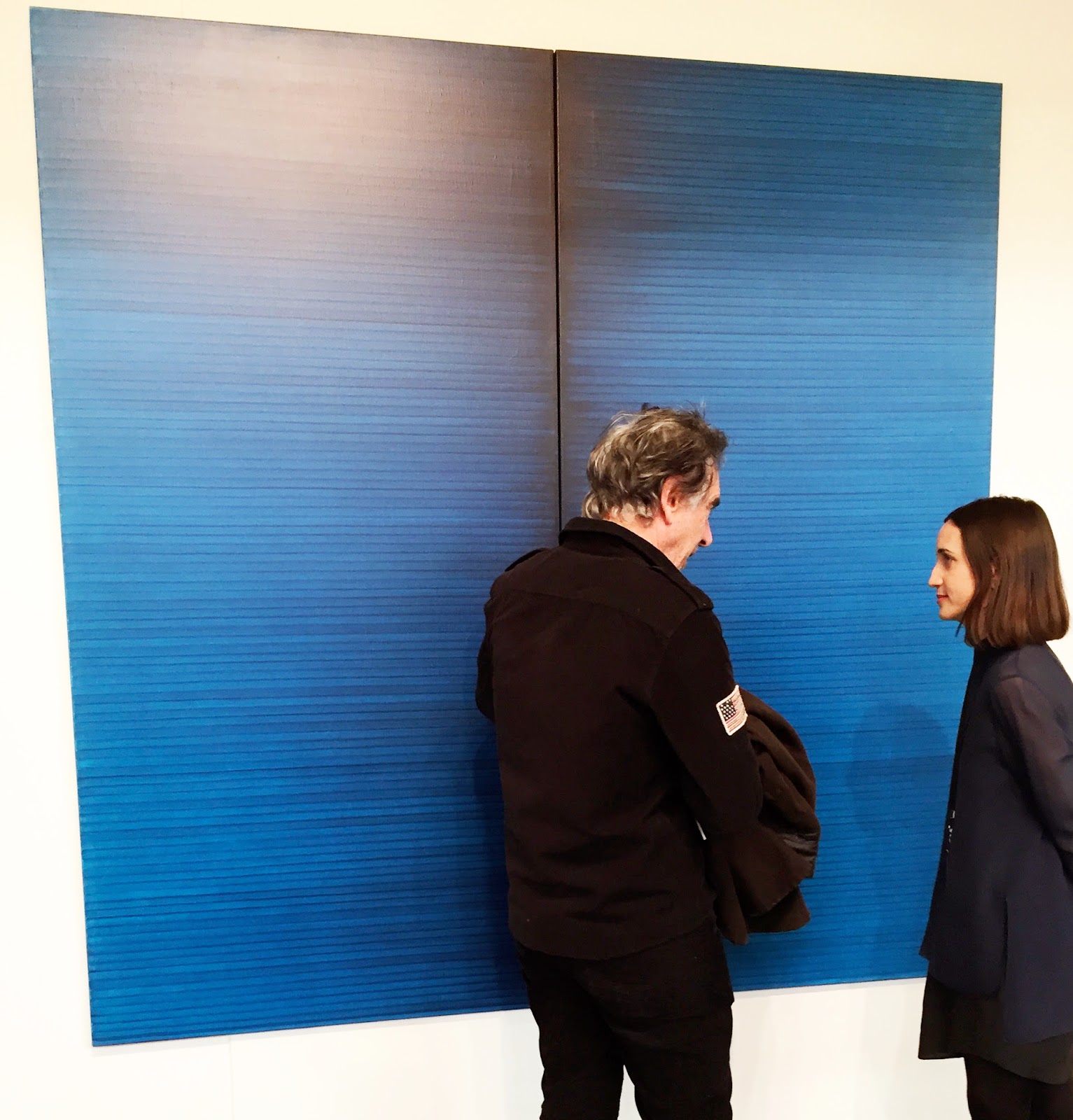 Another artist that I would make a special mention of was someone I had not been previously aware and what attracted my eye was a certain blue color on a pair of panels about six feet tall.  Irma Blank was given a solo slot at The Armory Show, and she is 81 years old based in Milan, Italy.  The color I was so attracted to comes from her ball point pens which she uses by the fistful.  She makes these essential abstract statements like a throwback to a more conceptual era.  Alongside these slabs of blue are what appears to be pages from a book, but on closer inspection you realize that all of what looks like lines of type are actually hand drawn lines of a certain weight, and you realize what a total obsession this must be for her! 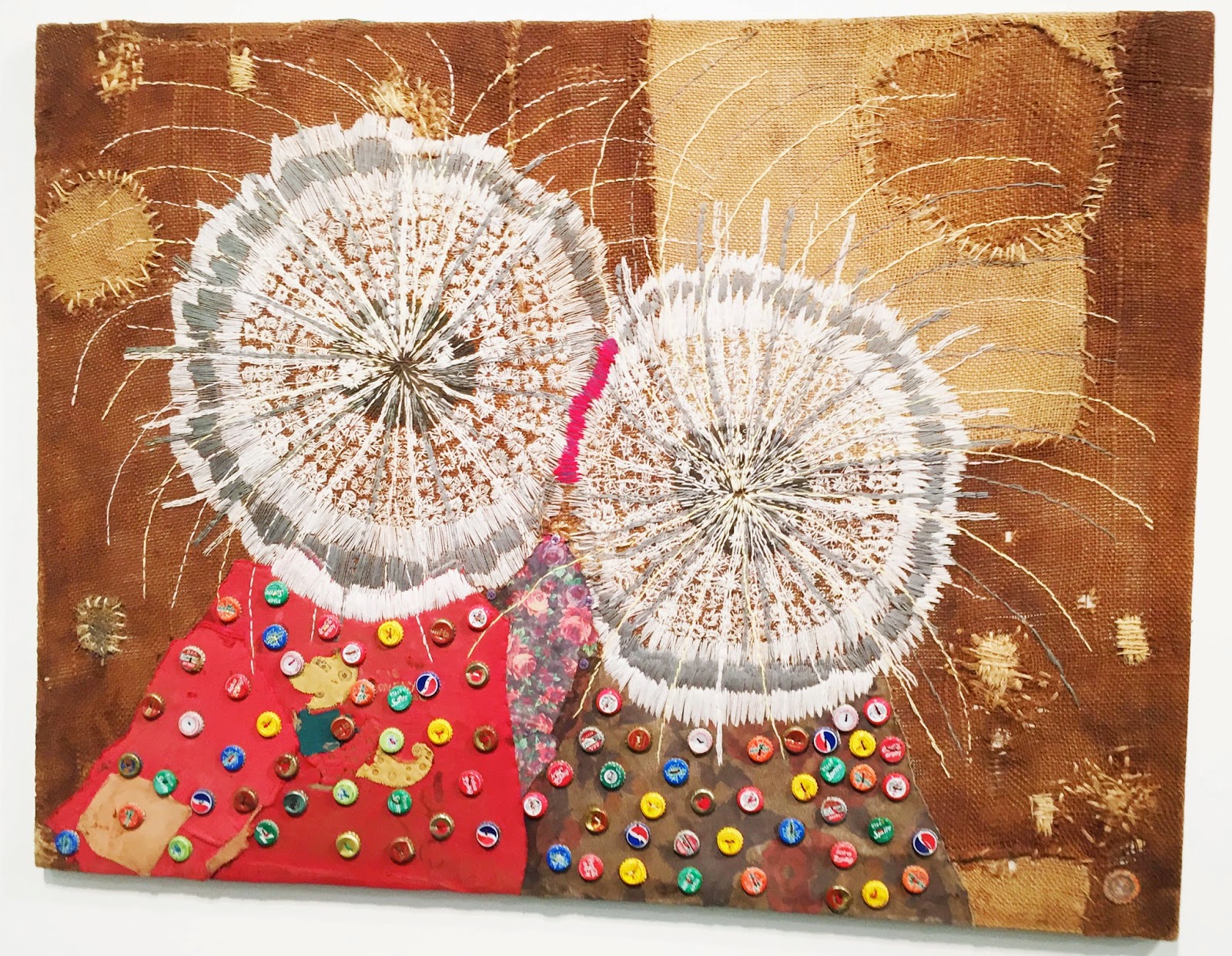 I look for names and art that I haven't seen before, and I was surprised by a Somalian artist - Elias Sime, who had "paintings" made of embroidered fabrics on large stretchers - one of which was called " Splash of a Pebble in Muddy Water".  This is a kind of unique ( and also obsessive ) form of art making that draws on African culture that needs to have more exposure in this country. 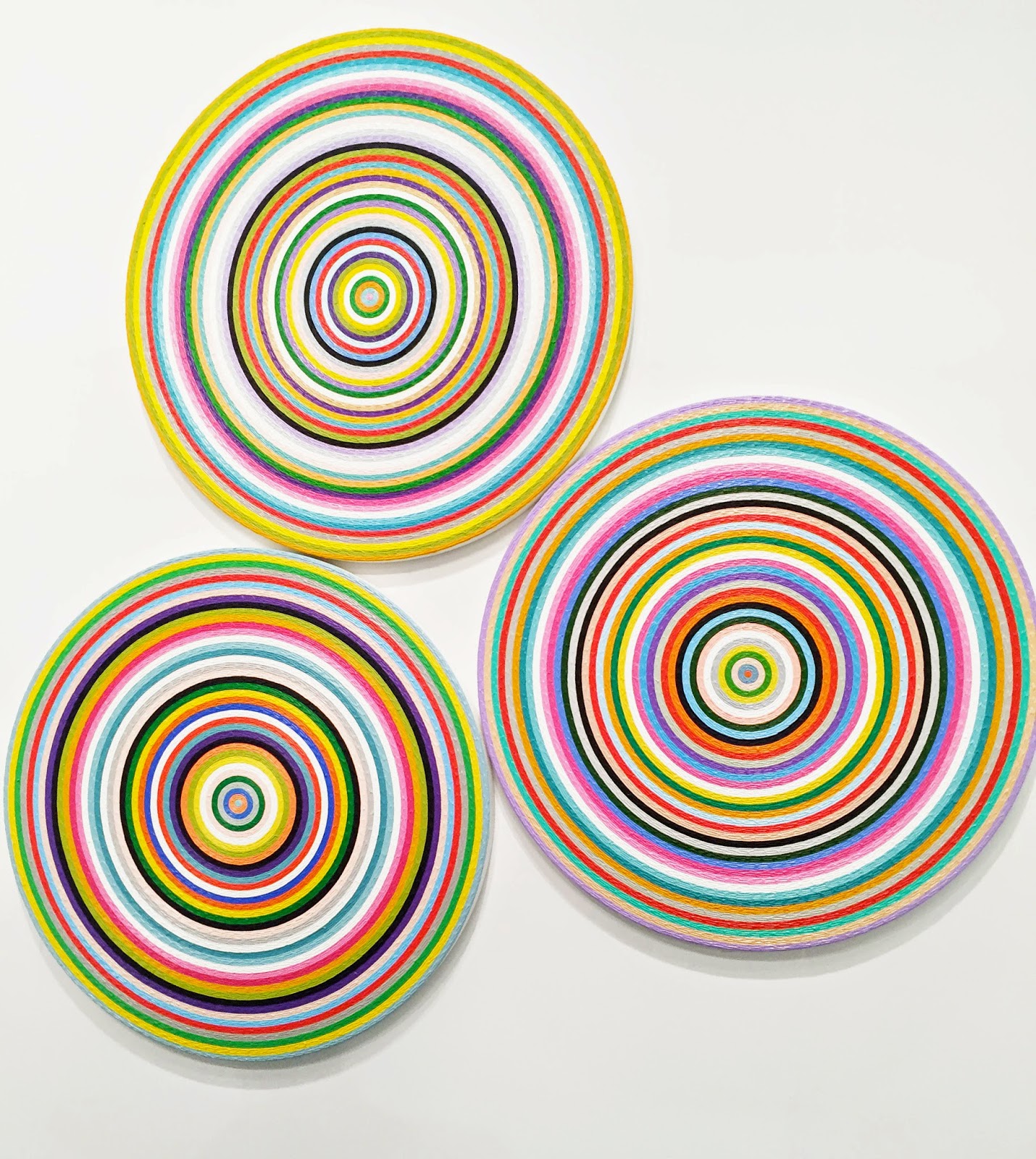 A trio of circle paintings also fell into this category.  The artist was Ekrem Yalcindag and I wonder what else I can find of this work at a show like this.  It seems that these large extravaganzas give us a brief glance at some new names, and it is up to us to follow up and see what we can find. Tantalizing. 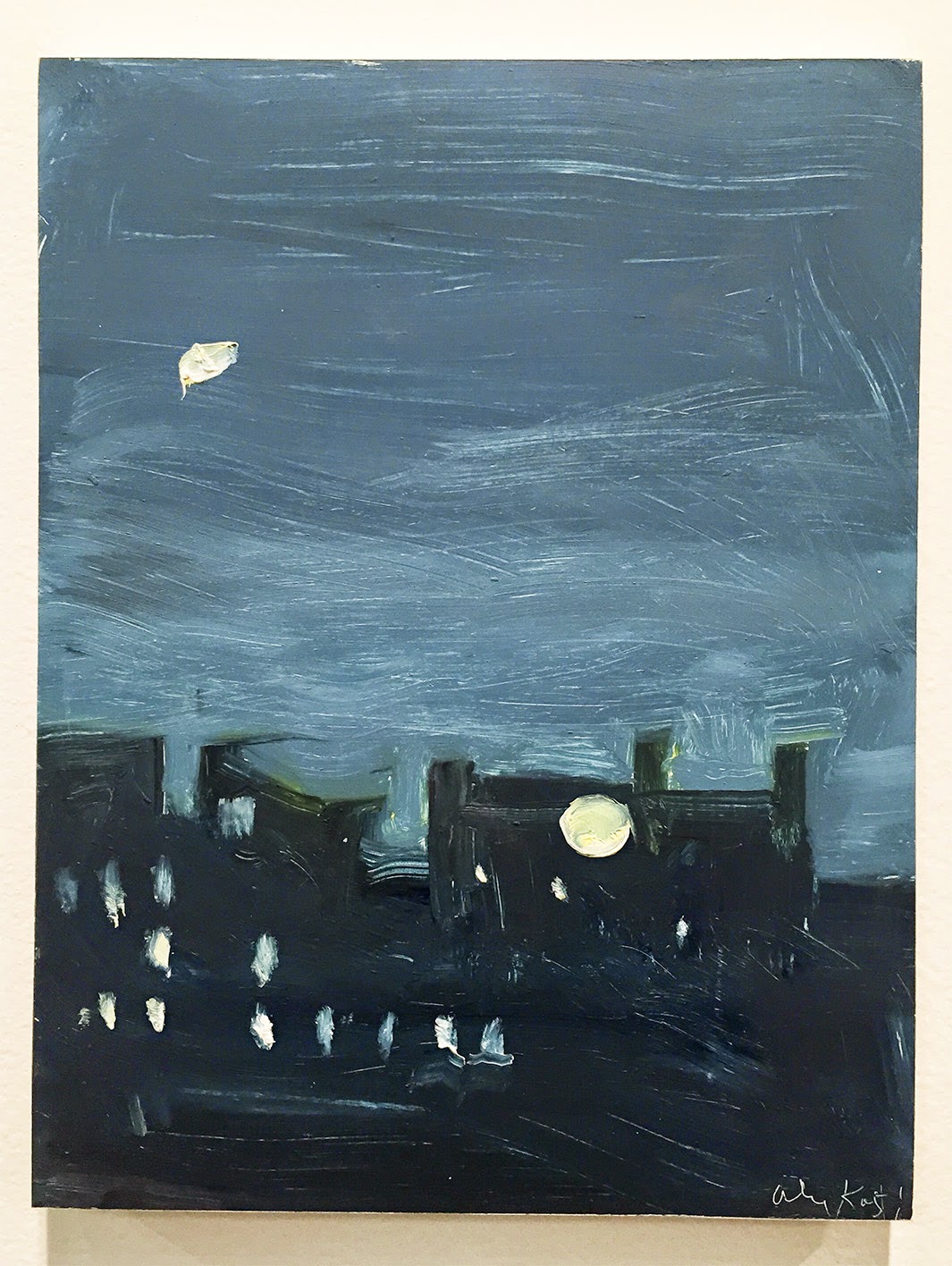 One name that is not new is Alex Katz. I studied with him briefly in the summer back in 1972 at Tanglewood, and I can't remember one of these big shows where his work was not present.  This time out, I see small landscapes that look like they are done right on the site. Here is a wonderful little night-time scene I would have liked to take home with me. 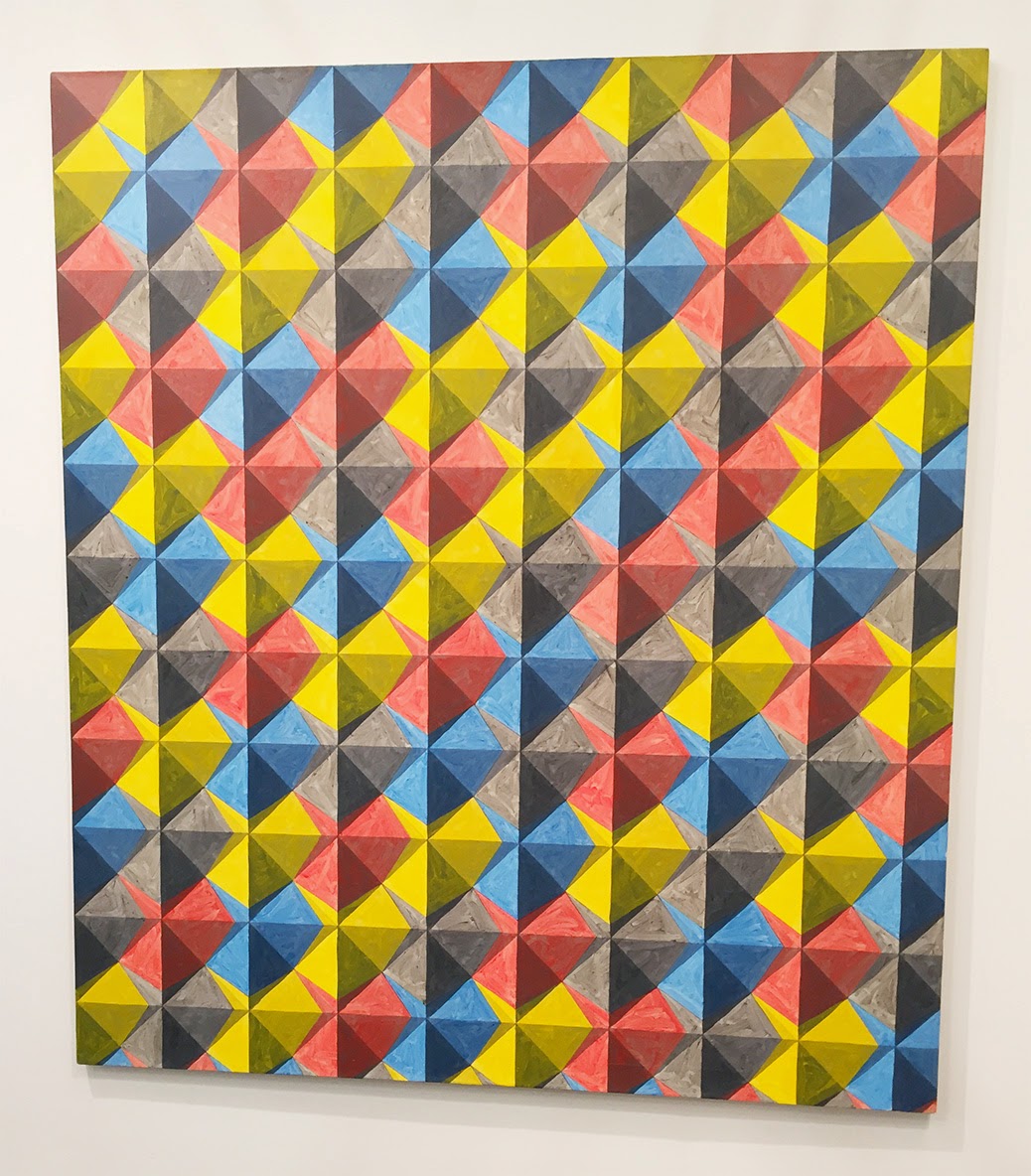 I mentioned in an earlier post that I like the artist Patrick Jacobs, so I went to see his new miniature diorama at Pierogi, and was not disappointed.  Among other artists whose work I am familiar with were a few canvases by Peter Schuyff which I think hold up quite nicely in this company.  At Two Palms Press, David Lasry presents a suite of prints by Terry Winters, all decked out in black and white. 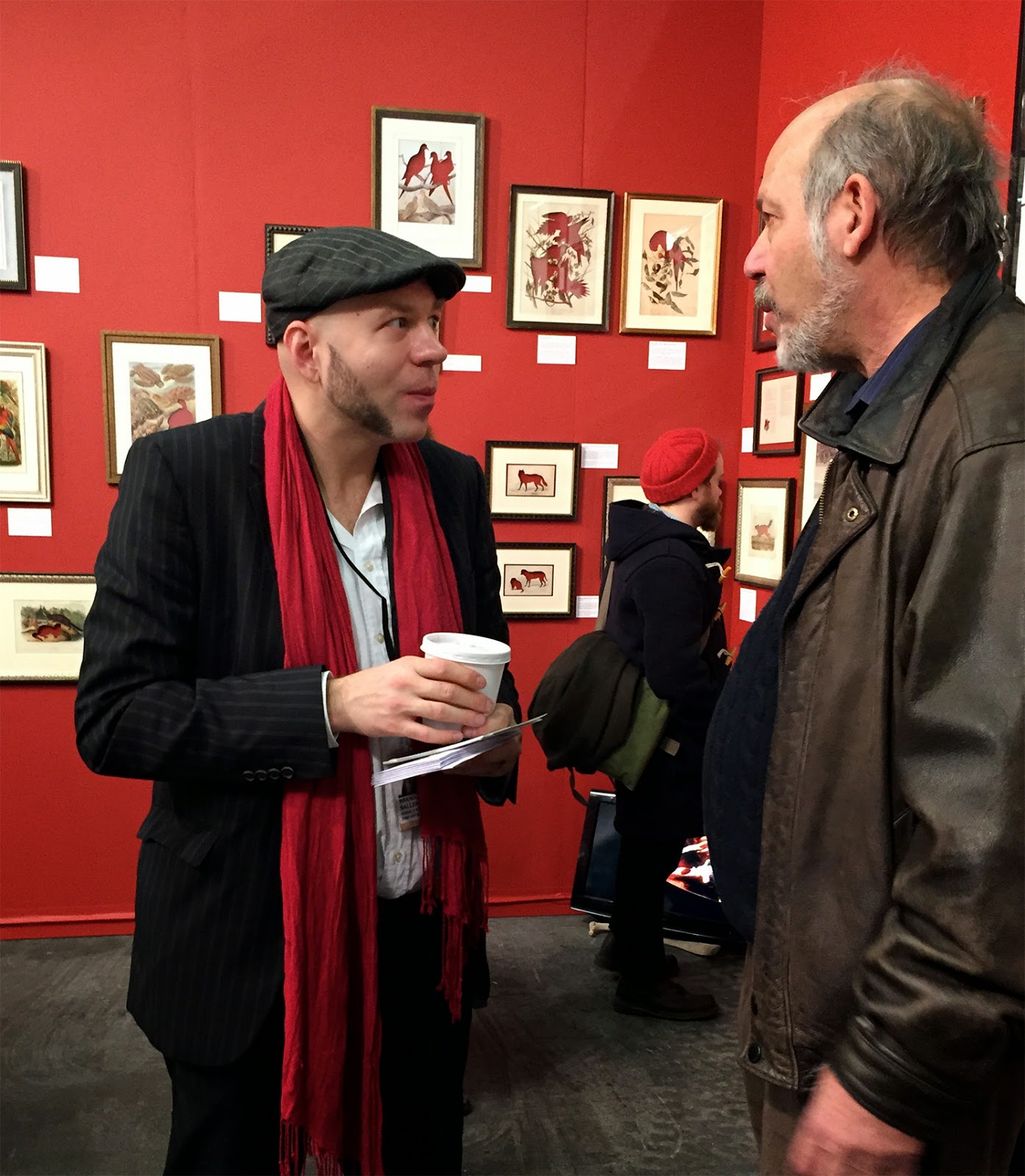 Around a corner we came upon Brandon Ballengee with a solo show at the Ronald Feldman booth. On view were some sublime prints he made from scans of fish which had been colorized, scanned and printed on rice paper, which were very attractive.  On the red walls of his show were numerous older prints by artists like Audubon that have been acted upon - that is the subject ( bird, or frog or other animal ) had been cut out from the print and subtracted.  The subjects - eliminated from view create a palpable sense of loss, and sustain the title of the exhibition which is "Frameworks of Absence". A portion of the proceeds from his show will be donated to environmental defense.

We stopped to talk with the artist who was present, and we look forward to seeing what he will do in the future.

On our way around I went over to inspect a very large bronze head that reminded me of a work by my colleague, Len Urso.  This head had been flattened in a way, but was very impressive from an artist who was new to me - Jaume Prensa, on view at Galerie Lelong.  I think if you see this work ( Laura in Huesca ) you would not forget it soon. 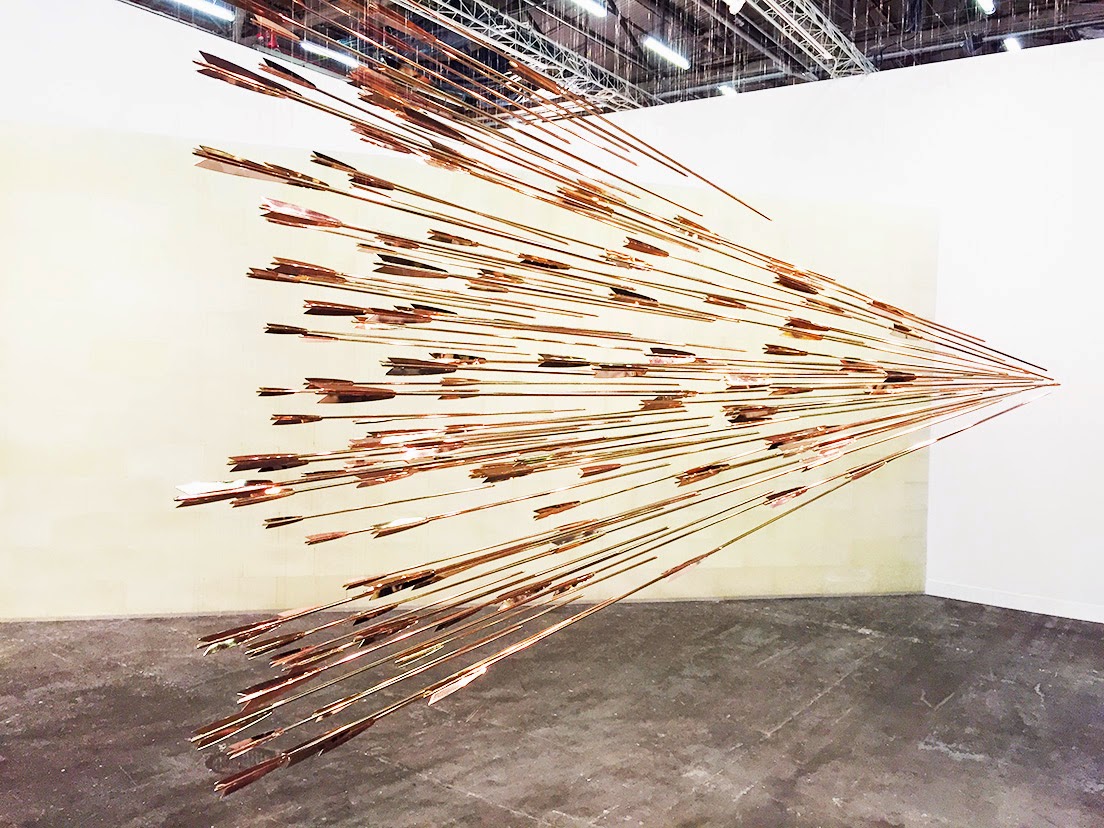 So much to see, and so little time.  We took the exit and drove through the night into Times Square to wonder at the continuous light show.  Let the good times roll.... 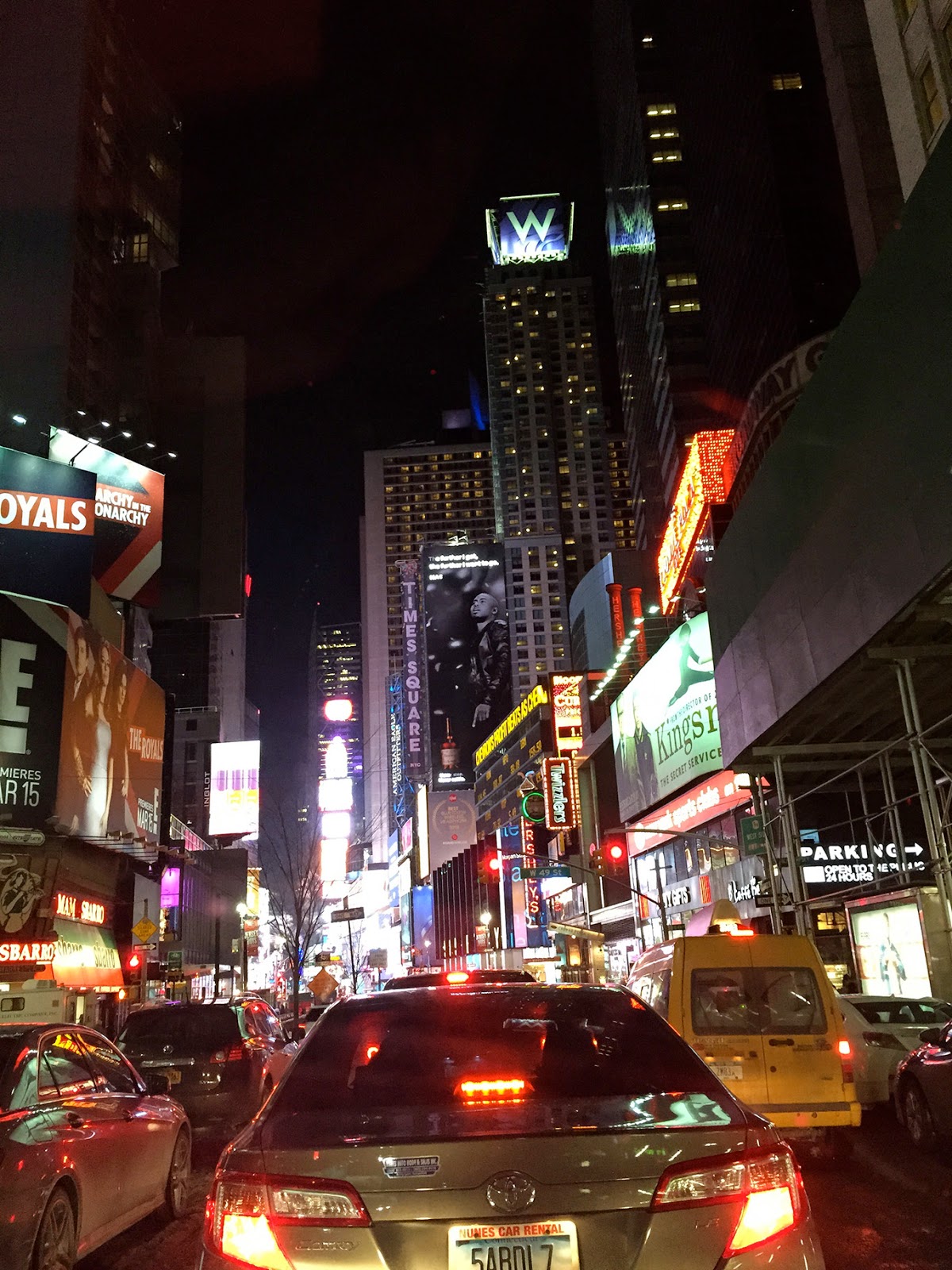 Bite From The Big Apple 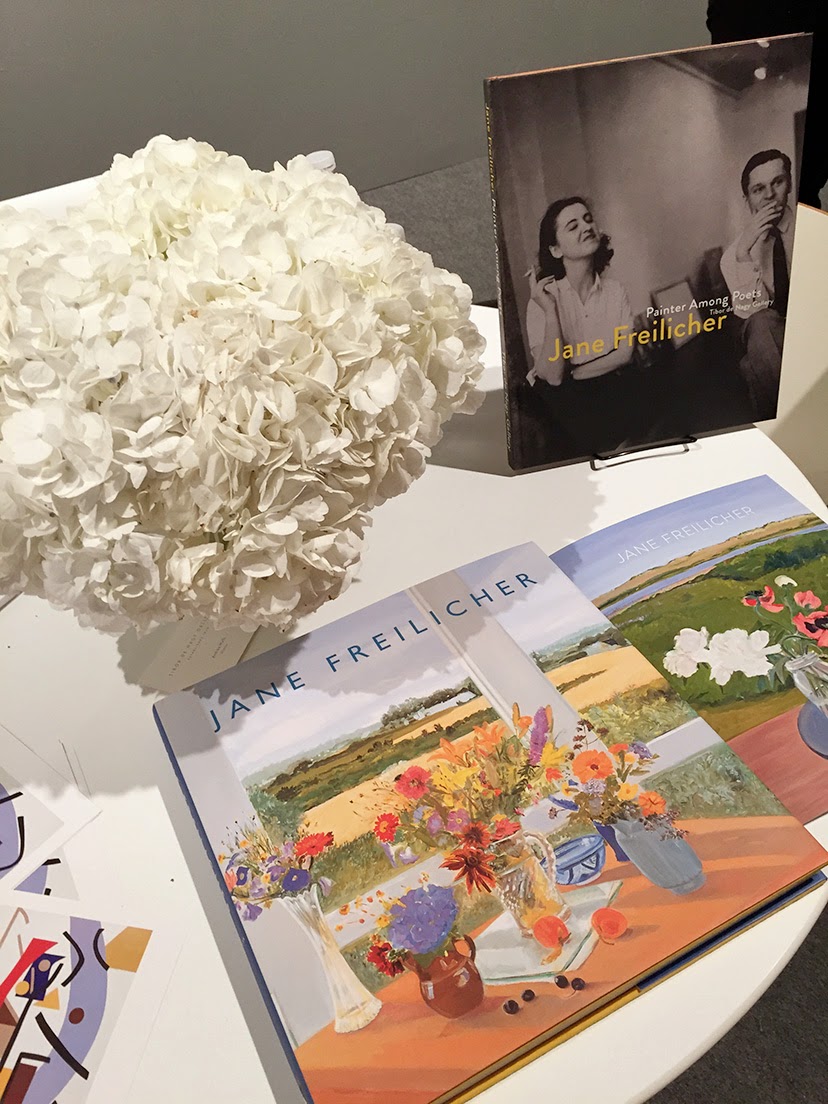 Inside the Art Show at the Park Avenue Armory, the crowd is hushed - not overwrought.  Many of the visitors are actually collectors, or dealers, and a few art historians ready to test the pulse of the art world that landed in mid-town Manhattan in early March on a bright day in late winter.  At a booth maintained by Tibor de Nagy Gallery there is a memorial to Jane Freilicher who recently passed on, and the paintings she left were evidence of her sustained love affair with Long Island landscape and a certain domestic tranquility.  I remember going to many of her shows while she was alive and well and I enjoyed the brushy, un-fussy realism that she preferred. 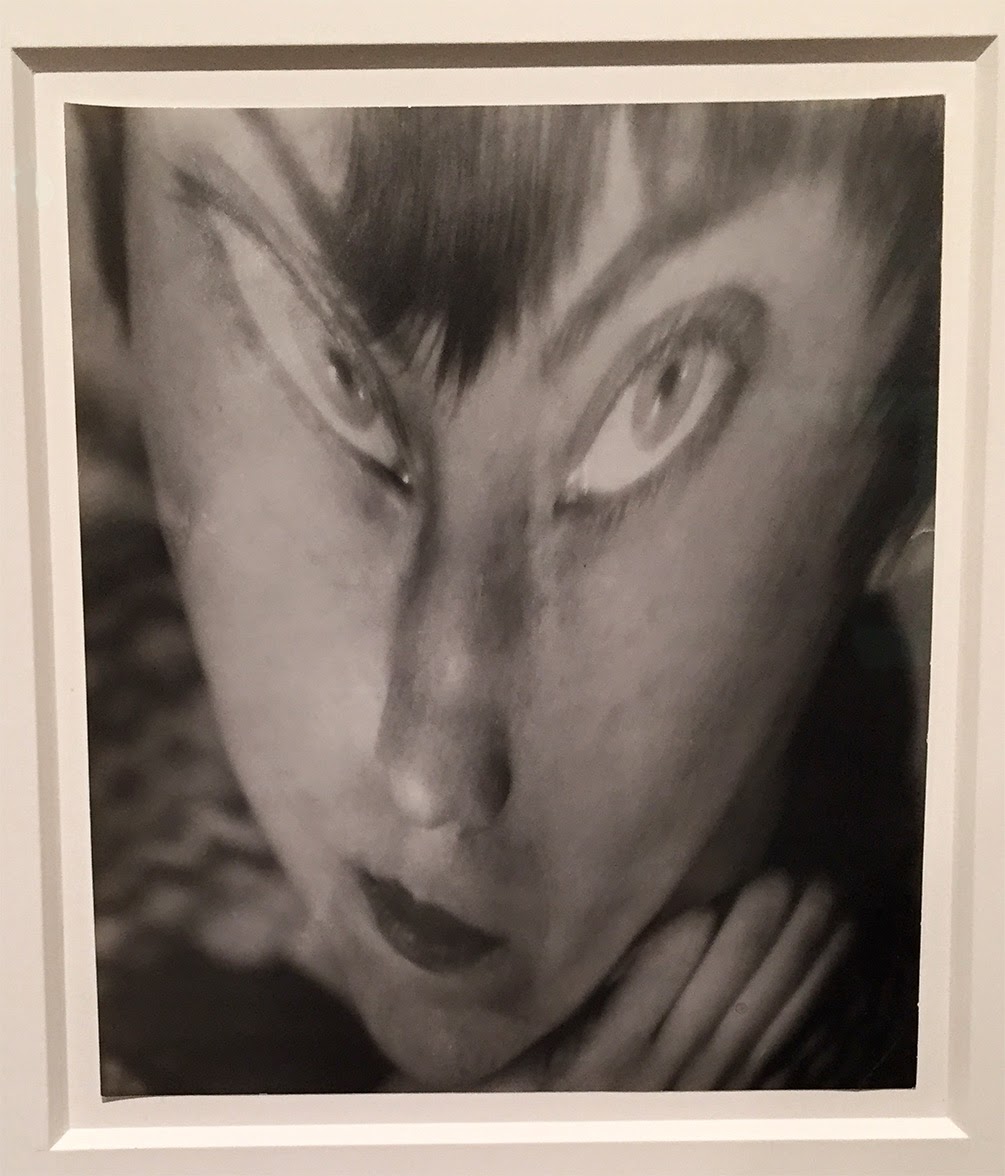 I stopped to look over a strange self-portrait from photographer Berenice Abbott and thought that this unusual image would look more at home in the contemporary art venues across town in the piers at The Armory Show.  I think my friend Amanda Means went to work for Bernice Abbott - to get her photos in order, and I recently read that a large part of her legacy - some 13,000 images were being donated to the Ryerson Image Center in Toronto.

The Art Show on Park Avenue seems to be a memorial to some wonderful artists and photographers, and supporting that notion was a group of very strong vertical compositions from Al Held at Cheim & Read.  I had not seen these paintings before and I enjoyed their energy and vitality which in his work gets more formal as he got older, and the paintings became strictly geometric and less juicy ( see the marker drawings in Van Doren, Waxter ).  I remember being interviewed by Al Held for a slot in graduate school at Yale, and it didn't go over very well for me since I was painting very figuratively at the time. 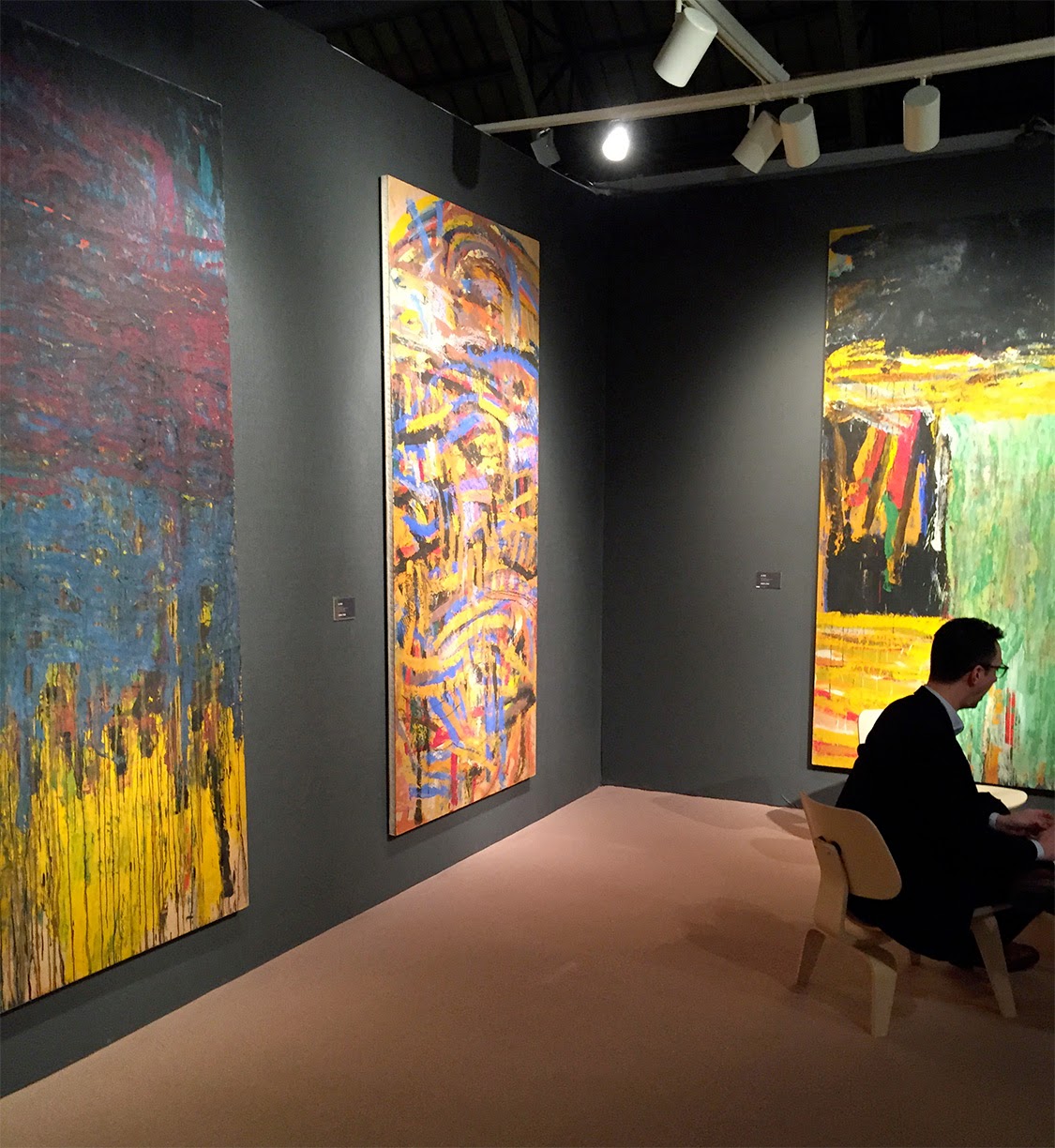 Thinking back to my Al Held encounters, I recall how philosophically the art world was divided in the early 1970's, and I don't think you would find that so much today - and in fact it is  hard to pin down just what the art world is all about today - except it has to do with money..

At the Art Show I had a chance to meet with Tom Wolf, who is a long-time teacher at Bard College, and he is the scholar behind the new show that will open at The Smithsonian, in Washington, D.C. honoring "The Artistic Journey of Yasuo Kuniyoshi" featuring 66 of his finest artworks.  My friend Tom Wolf wrote the catalog, and I look forward to seeing this exhibition of which he is the curator, opening April 3rd, and running through August 30, 2015. 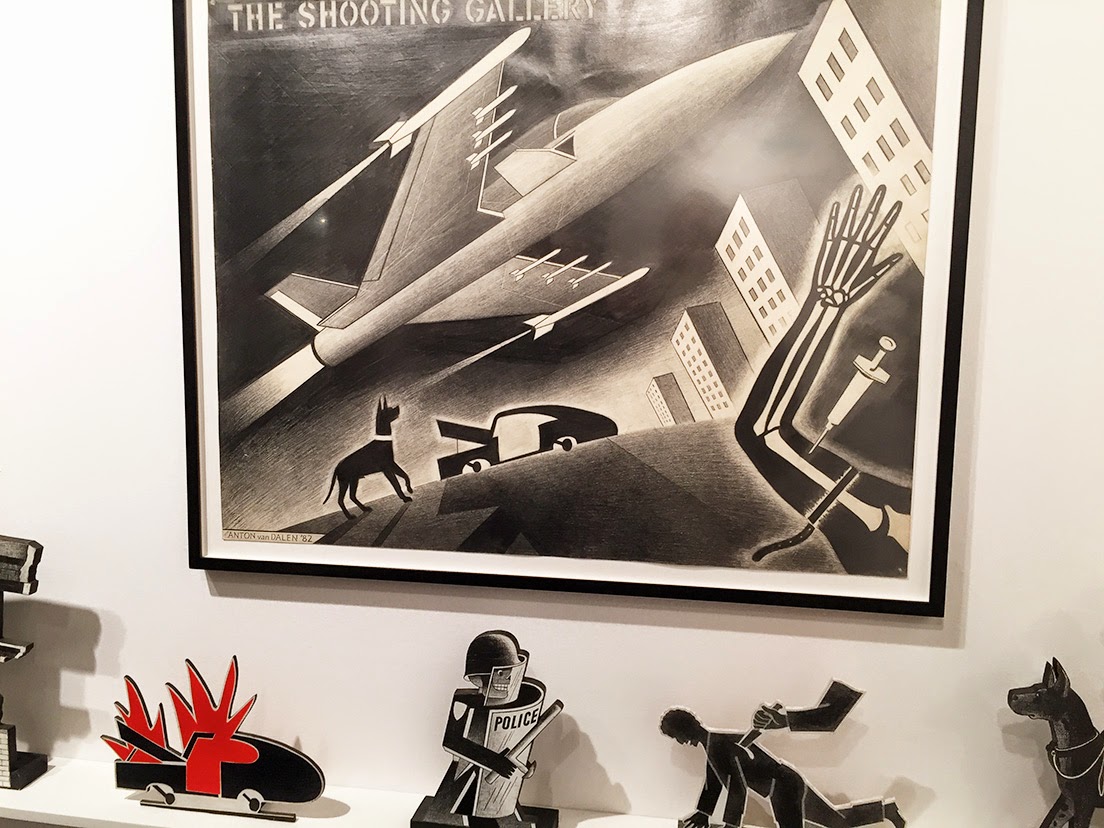 The Park Avenue Armory is not the gigantic cavern that the piers represent, and you can actually walk around this show in a few hours.  I looked over everything and found some interesting graphic drawings by Anton Von Dalen, including "The Shooting Gallery" from 1982.  I chat with the artist whose work I see from time to time, and he has a noir-ish take on life, and also a kind of desolation which I find both poetic and comic at the same time.

Yet another retrospective was being held at the David Zwirner booth which accounted for several of the late paintings by Forrest Bess that I had not seen before.  As usual these were singular images, modest in scale, but very deliberate in their restraint and color.  This is an art of a poet, albeit a very controlled one. 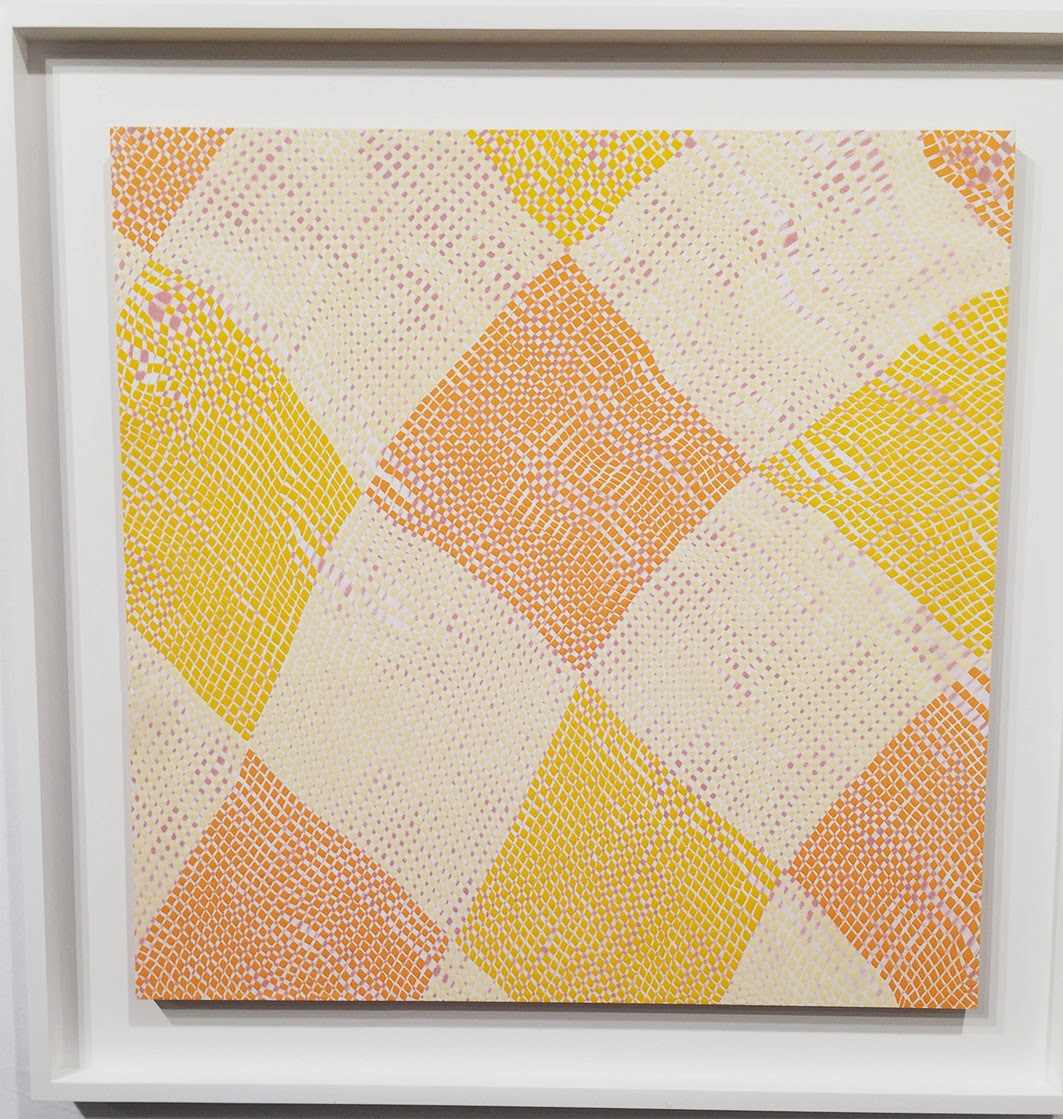 Around toward the other end of the show we spoke with a dealer presenting Michelle Grabner's early paintings from 1996 to 2001, and these all use textiles as a template for simple declarative patterns.  Her paintings are very plain-spoken and mid-western in their sensibility and in their comforting non-judgmental approach to expression.  But, I could hear in the breeze - it is all about what is not said, that makes this interesting.
Posted by Alan Singer at 7:47 AM