Have Blog, Will Travel 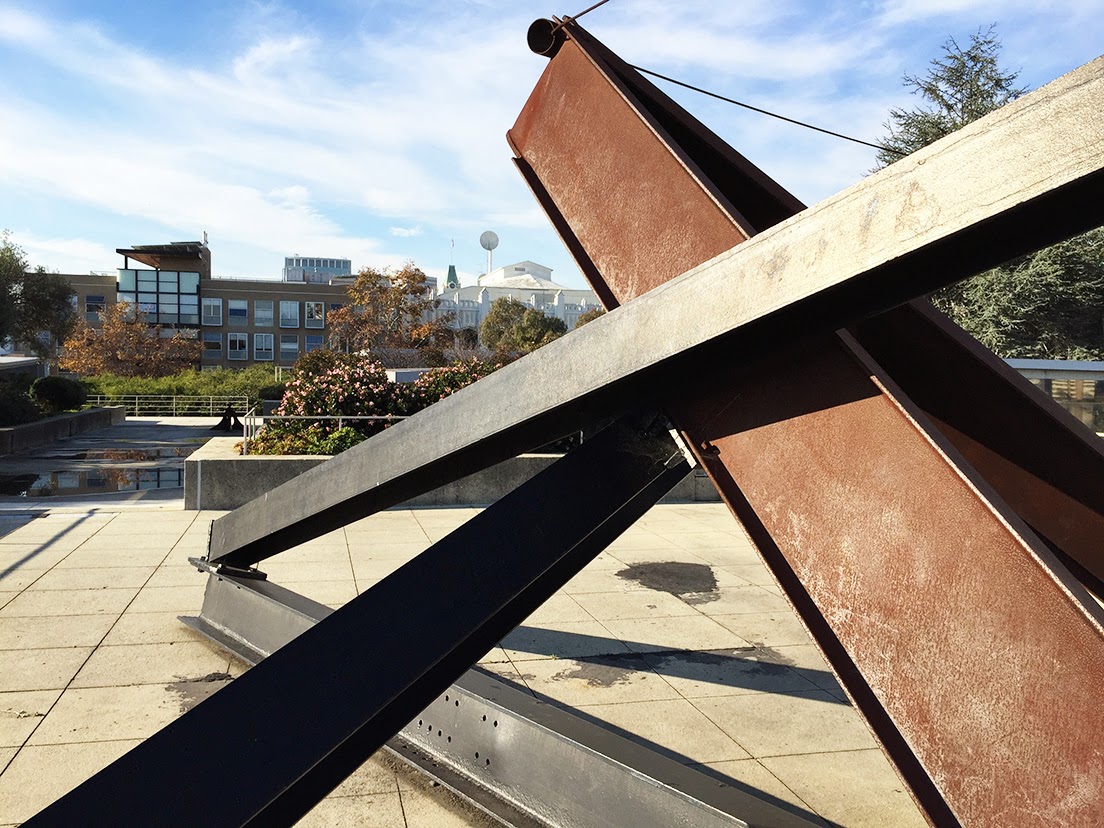 This blog travels!  We go west for Thanksgiving, and before we sit down to dinner together, let us look around the art scene in Oakland      ( California, that is ).  The New York Times said recently that "Oakland is the new Brooklyn" - and having lived for a while in Brooklyn, I just had to go and see for myself.. 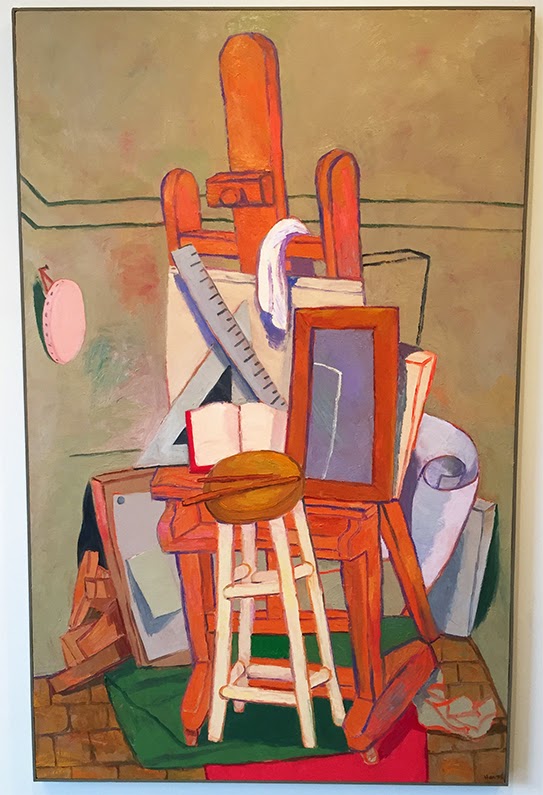 We stopped to take in the gallery scene not far off from Telegraph Avenue with a tour of a 5000 sq. ft. gallery space called Vessel which featured a large selection of paintings and prints from the late William Harsh who passed away in 2012 at age 59.  Harsh had been a student of the painters James Weeks, and Philip Guston.

When I was a student I heard Guston speak at the New York Studio School, and I was also familiar with James Weeks having studied with him at Tanglewood, so I was eager to find out more about William Harsh, and I could see right off that his art owes a strong debt to Guston and to a lesser extent to James Weeks.  Harsh is at the cusp of expressionism and representation, and the stacked nature of this deck of cards sometimes tumbles into a caricature of Philip Guston without presenting something  more original. 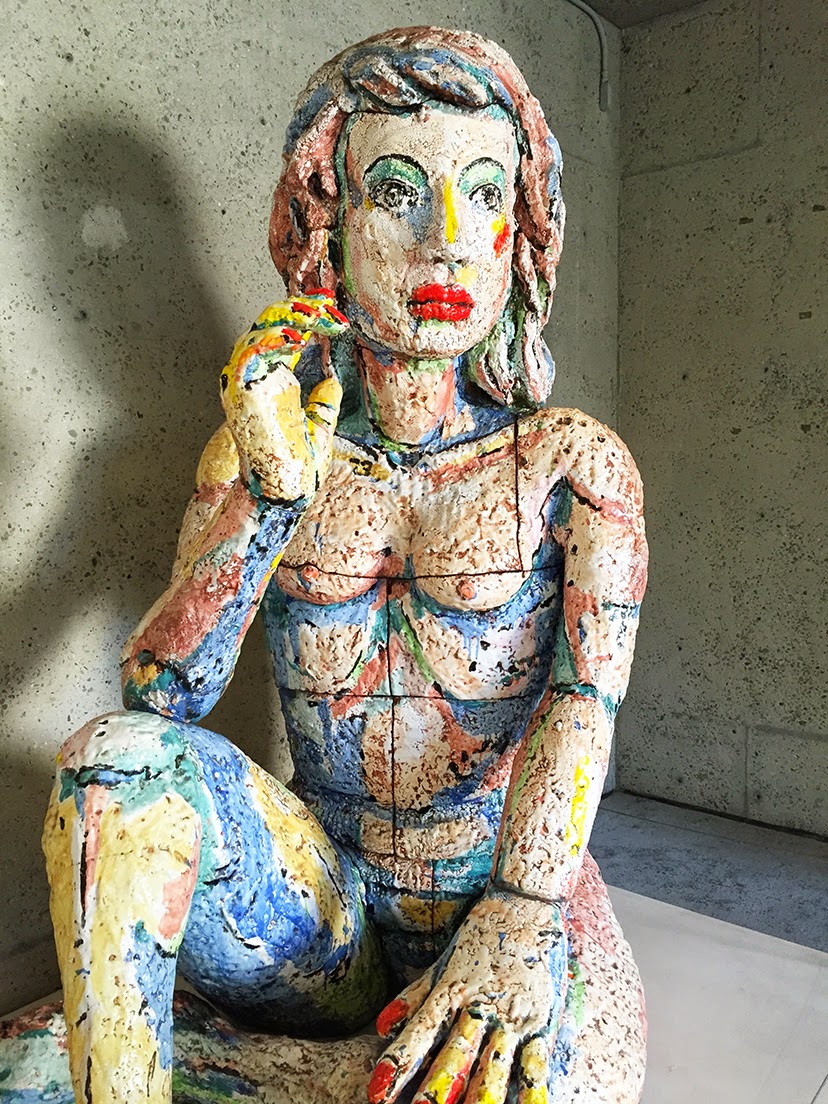 It was a beautiful day in downtown Oakland, so we moved on to the Oakland Museum of California perched near Lake Merritt at 1000 Oak Street.  This modern building is really a series of museums that incorporate a terraced sculpture garden with many levels and many views and some engaging modernist sculpture.  Greeting us at the door was this larger-than-life glazed ceramic woman from the artist Viola Frey whose work I used to see frequently at Nancy Hoffman Gallery in New York City. 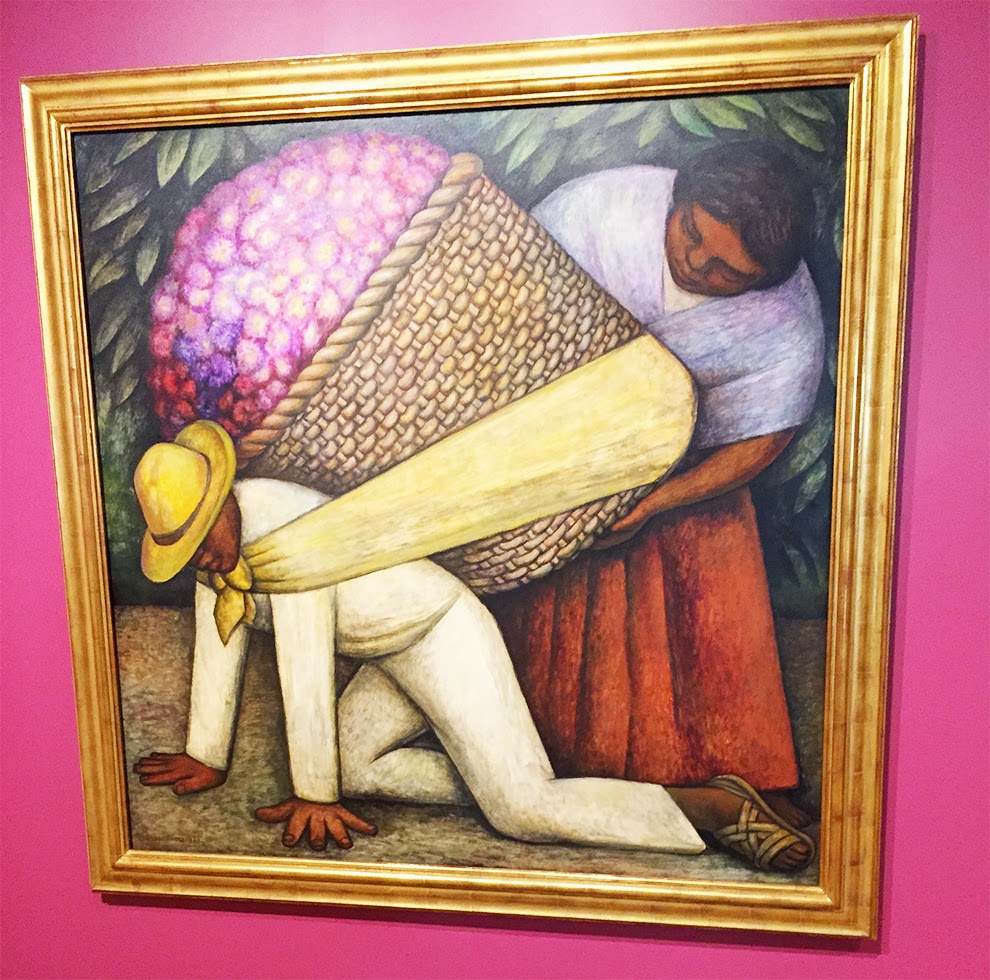 Once inside the museum, the show that attracted my attention was all about the visual arts and a strong relationship to communities that grew up around the artists living and working in the Bay Area.  This is a bit of a history show, and you are greeted at the beginning with well-known works by Diego Rivera and Frida Kahlo. 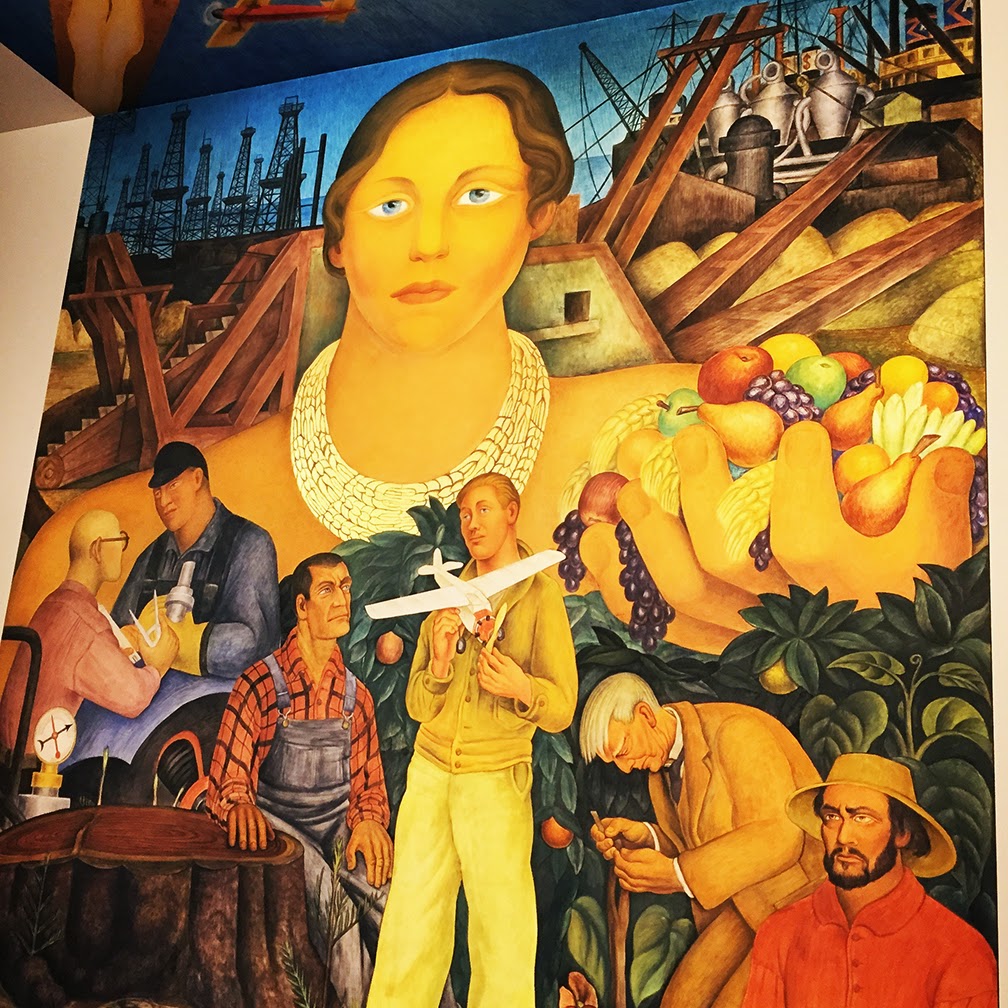 Diego Rivera ( small scale rendition of "The Allegory of California" )

Most impressive,  on our tour of the show is Diego Rivera's mural "The Allegory of California" which was created for a stairwell in the Pacific Stock Exchange building.  Here is the story of an activist painter with ties to leftist politics being commissioned to paint at the seat of capitalism - and boy - did that rub some people in the wrong way! 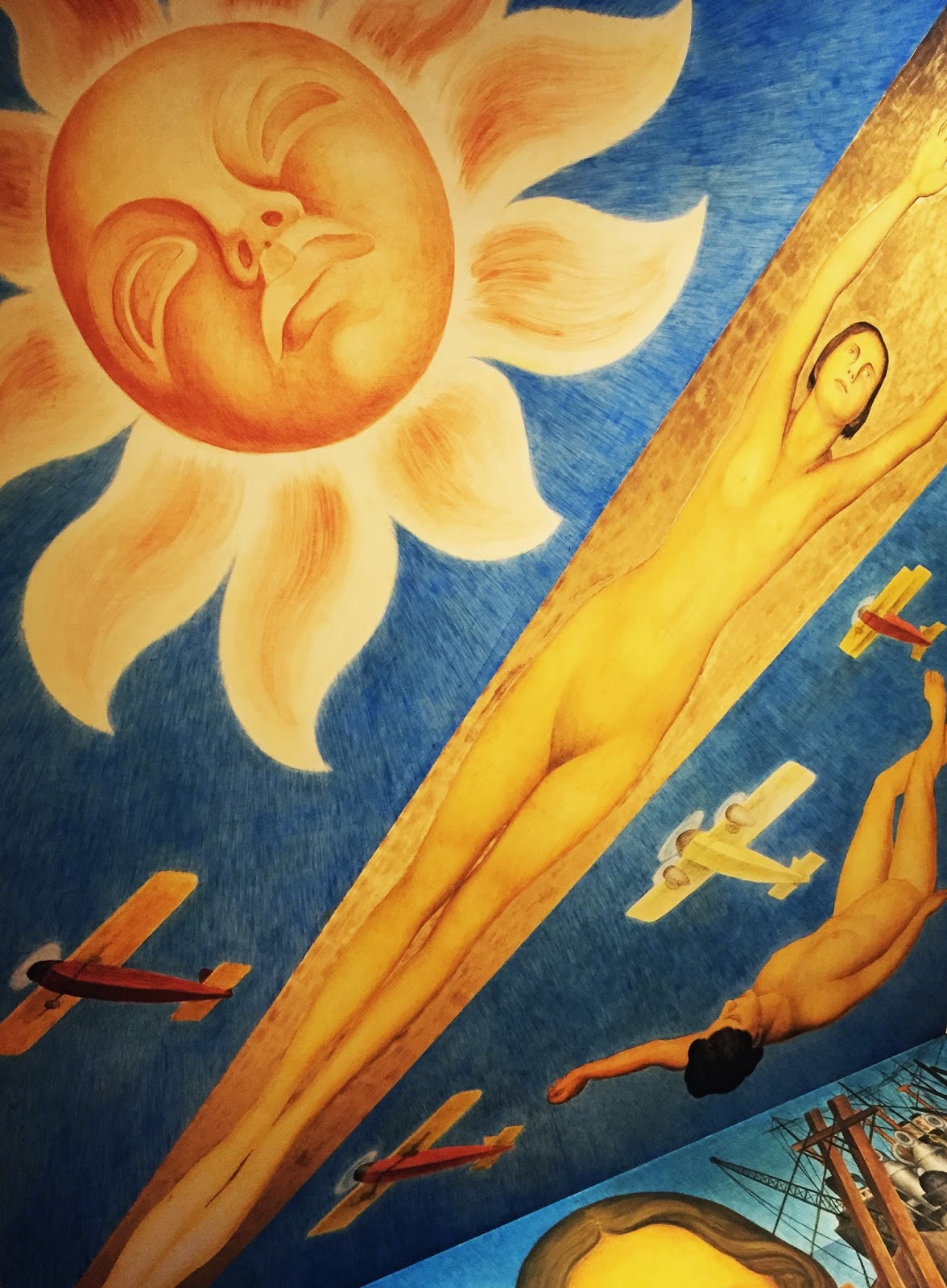 Rivera on the ceiling ( The Allegory of California )

The photographic scene in San Francisco is also honored with a few images ( too few from my perspective ) and that section of the show deserved a better treatment - because the photographers that are included continue to be a major force in the art form ( Edward Weston, Ansel Adams, Imogen Cunningham among others ). 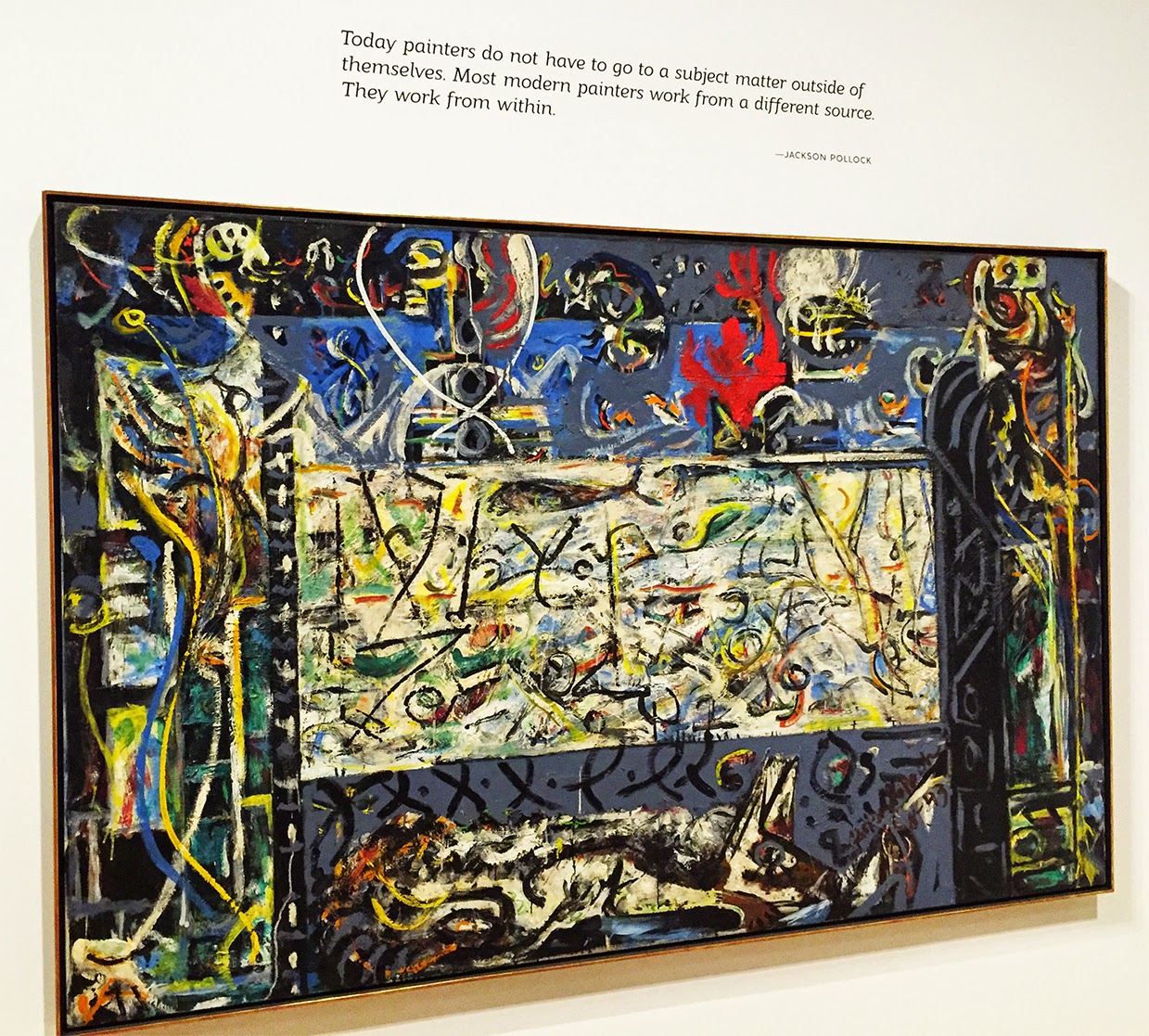 "Today, painters do not have to go to a subject matter outside of themselves.  Most modern painters work from a different source.  They work from within."
Jackson Pollock

There was a period of time after WWll that artists who are now of international stature were in the higher educational field in the Bay Area , such as Clyfford Still and Mark Rothko.  They were in the process of making a name for themselves and had a strong effect on the path that painting was to take.  Two others Philip Guston and Jackson Pollock met at school in California before migrating to New York City to find fame and fortune. 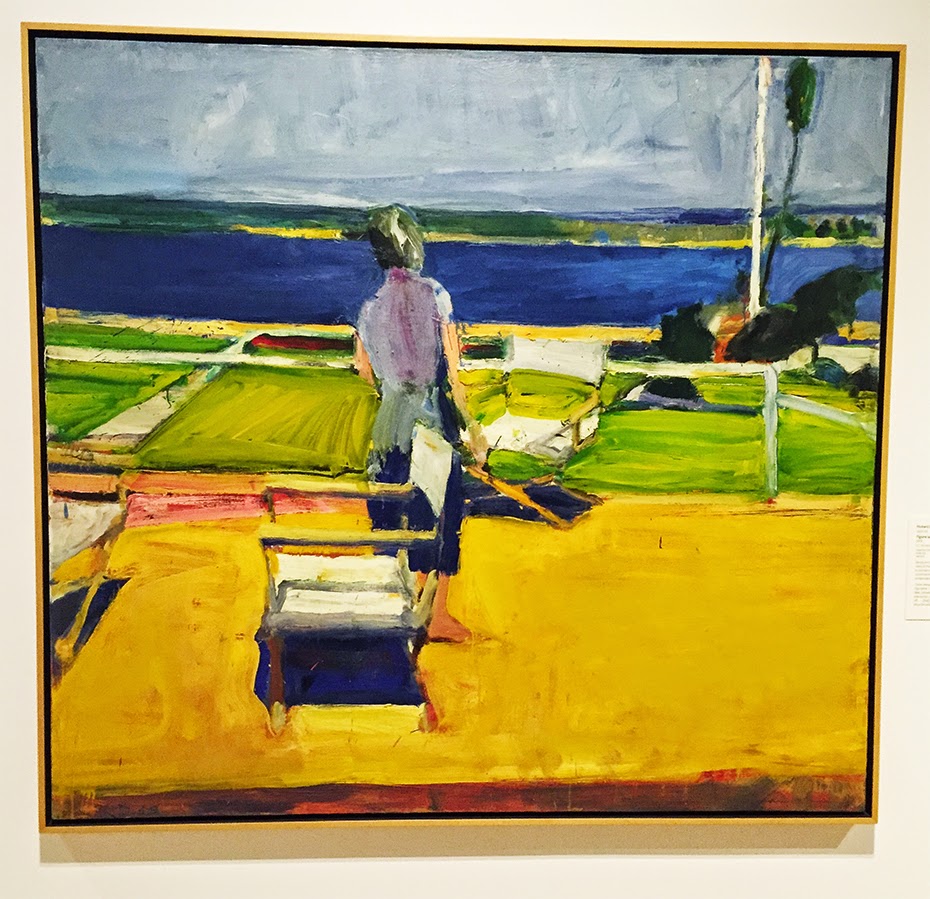 I was influenced by the painters who came to my attention from the 1960's onward, and that included Richard Diebenkorn who regularly exhibited at the Poindexter Gallery near 57th street in Manhattan, and Wayne Thiebaud, who is still alive and working today ( talk about longevity! ). 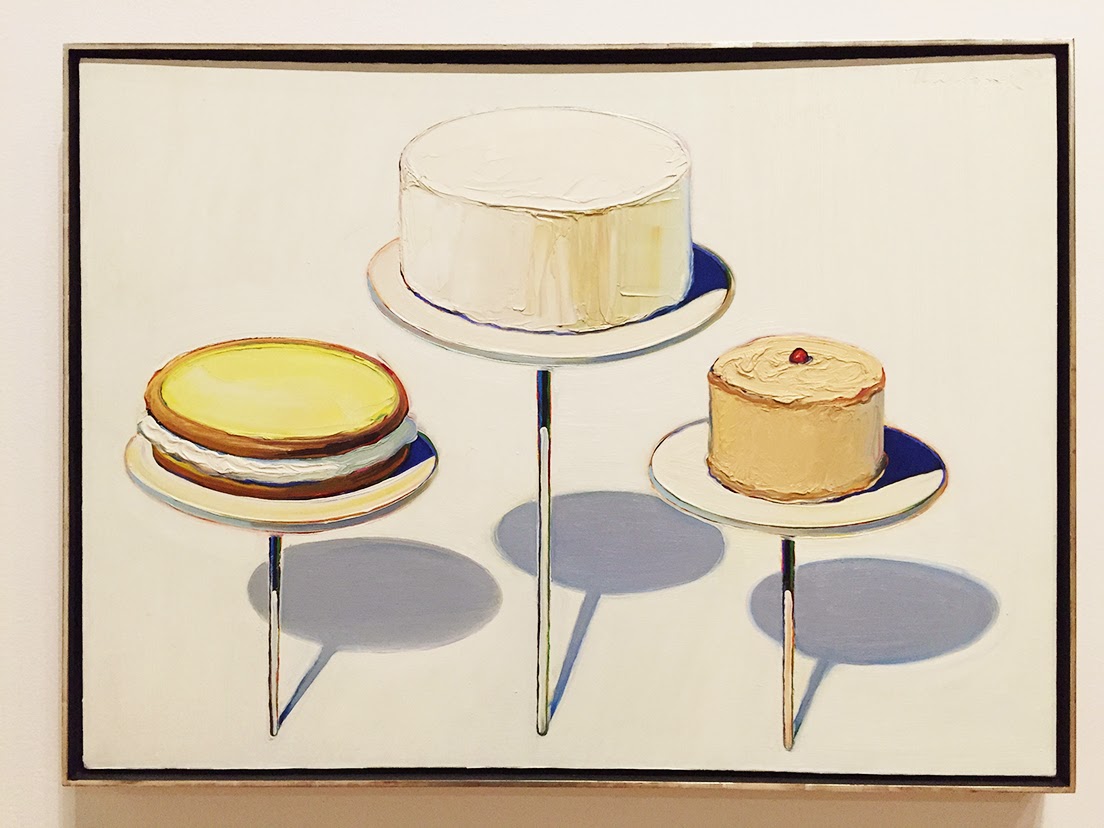 The show concludes with a group of current artists who grew up in part with graffiti, skateboards, and found object/installation art.  Some of these folks were in the movie "Beautiful Losers" that came out a few years ago.  Prominent in this show is the art of Barry McGee who has a kind of funhouse installation of hundreds of small framed patterns and figuration that is in total truly memorable and mind bending. 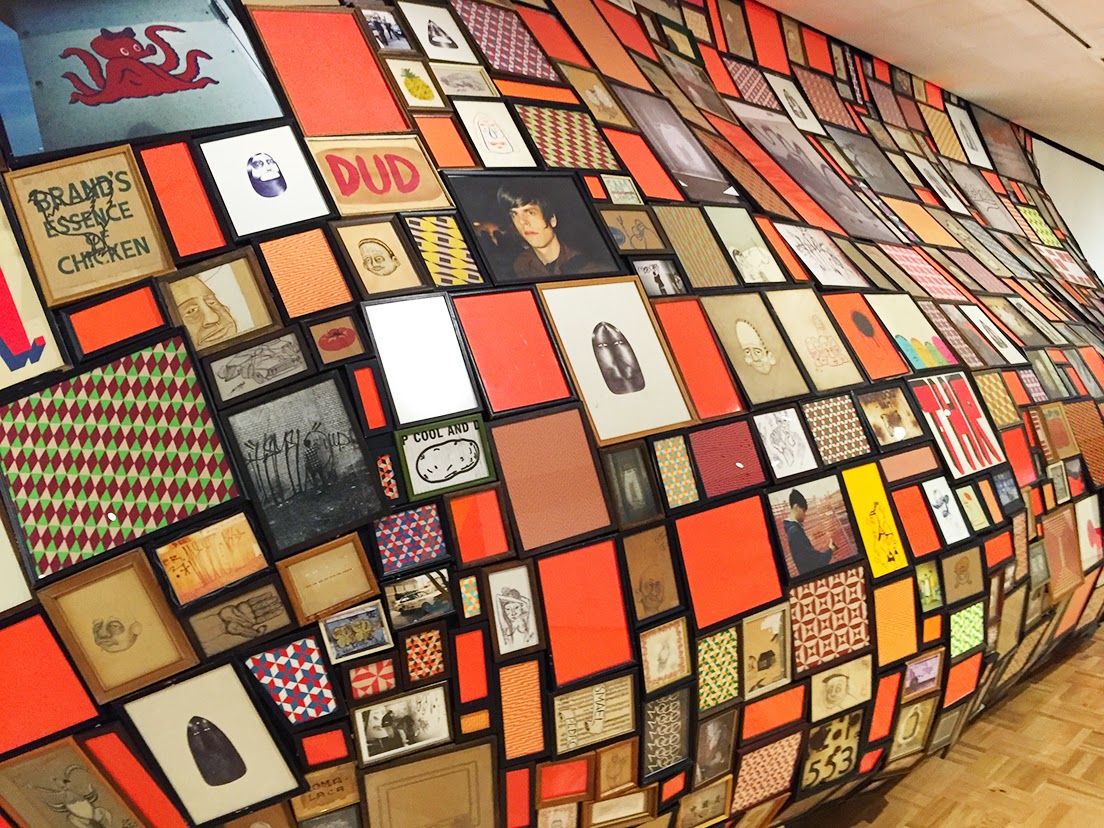 Barry McGee
Posted by Alan Singer at 8:18 AM 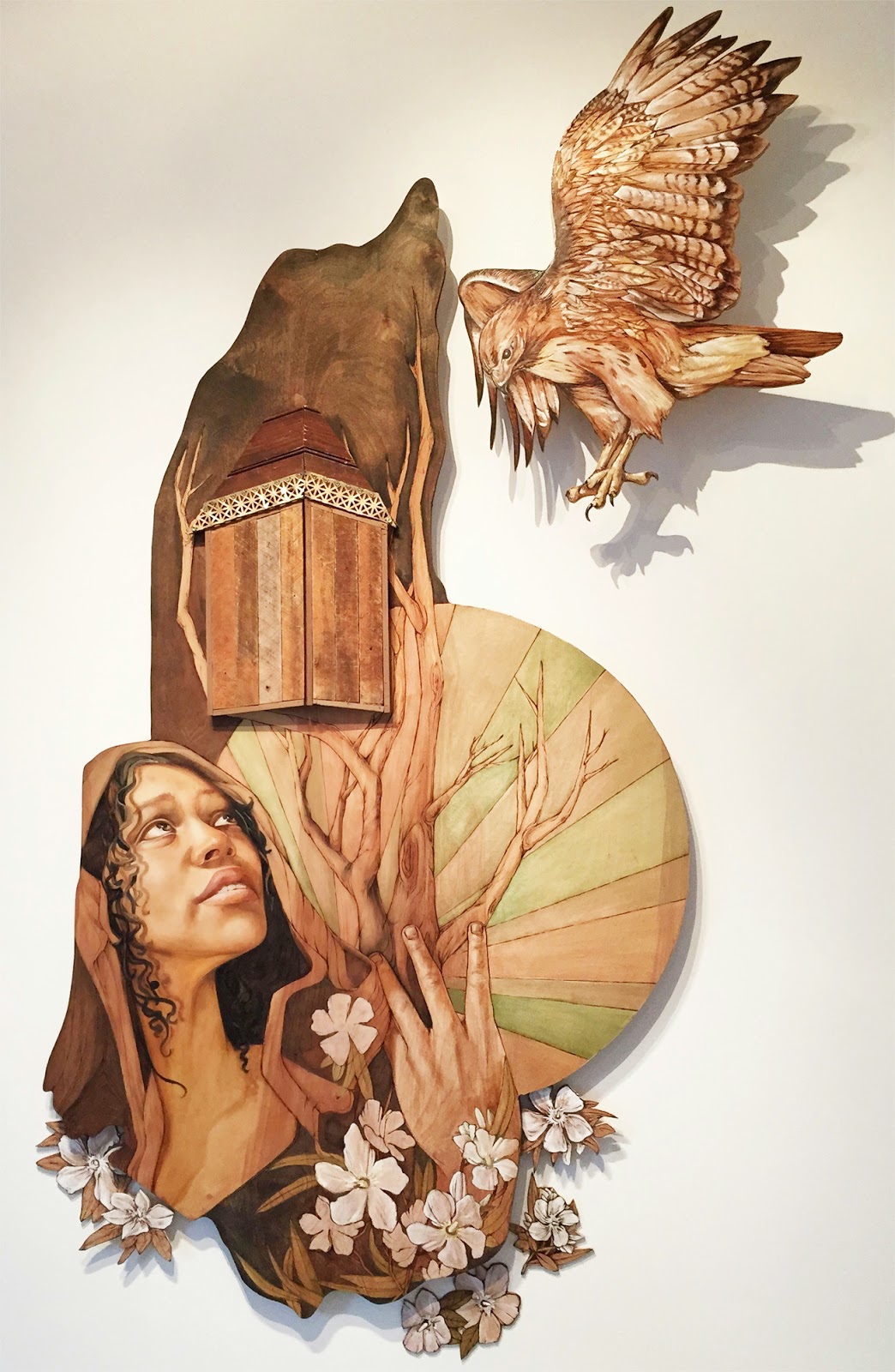 Is this part of gentrification, the nesting impulse?  Arriving at a certain junction in life one wants to look for a comfortable spot to call home and maybe start a family.  One of the home based hobbies people had when I was a kid was to take up wood burning ( not on a stove, but with little hand tools that you plug in to make your own brand of art).  I thought it was only a fifties sort of thing, but when I was putting together my book on wildlife art ( Quarry Books division of Rockport Press published "Wildlife Art" by Alan Singer in 1999 ) I came across the art of Haruki Koizumi ( see below ).  I knew I had to have his art in my book, it was such a delicate rendition in basswood of an Eagle-Owl.

Now, along comes the art of Sarah C. Rutherford with her show "Nesting " recently opened at the 1975 Gallery.  She has a short story form of composition complete with enigmatic titles which she has given these low-relief painted constructions.  The stories she has to tell about birds and people ( are we supposed to know who sat for these portraits? ) denote a space she has carved out for herself that is all very much her own in our contemporary art scene.  CITY newspaper surveys say that she is at the top of her field, as the most popular artist in Rochester at the moment. 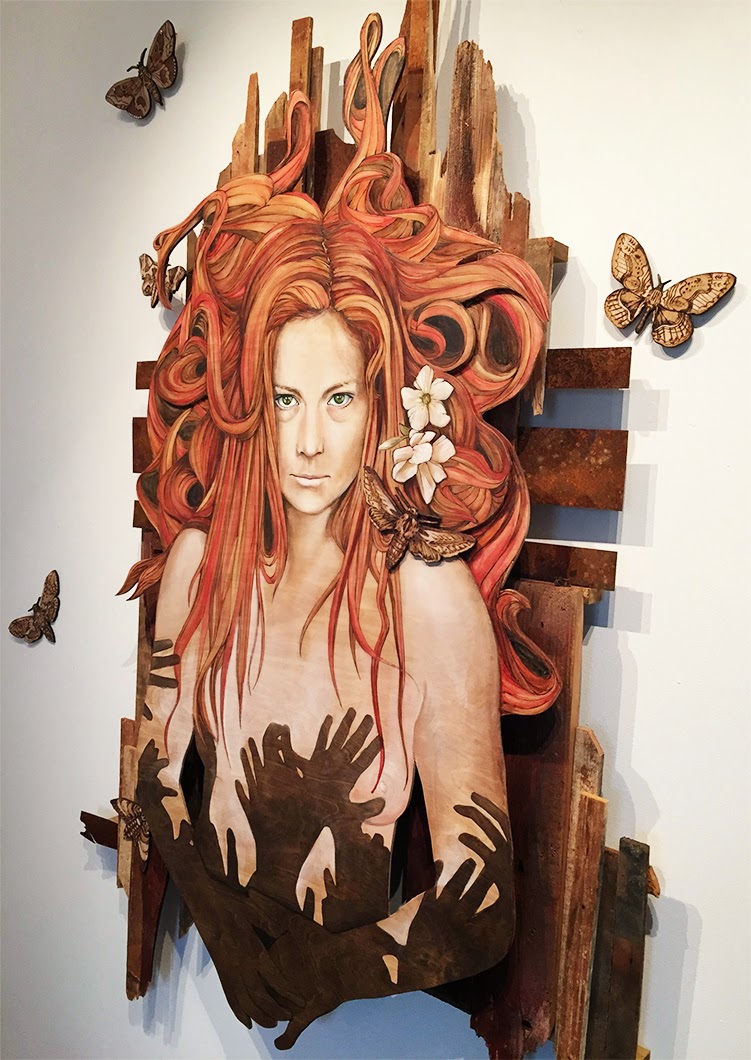 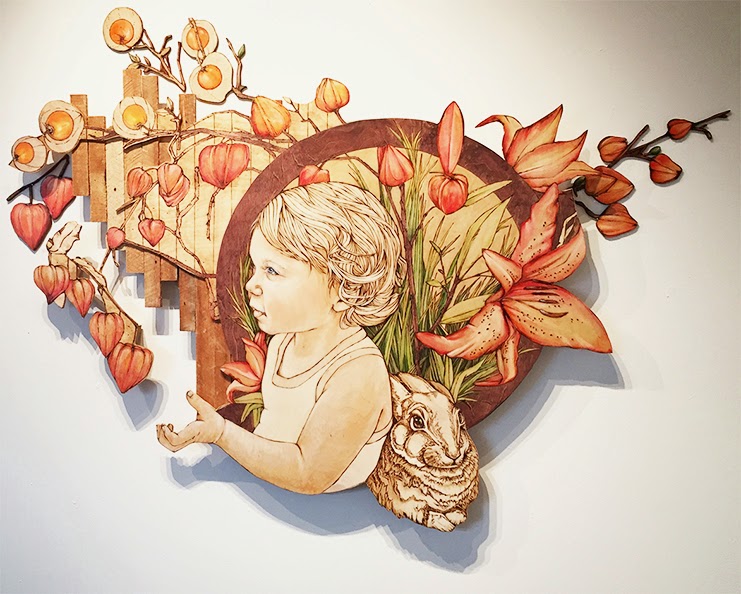 Sarah does this all in a non-threatening way, and you come away with a feeling of assurance for the careful aspects of her art - observance of nature - both human and animal, and the care she gives to the painting and shaping, the wood burning for detail, and the layering of her tableaux.  There is an illustrative core to this work that goes beyond nature worship with forays into a mysterious land of action and reaction ( "The Shadow of the Grasp" ).  Sarah is really onto something with the birds she conjures with.  She places most of her birds in flight, or just about to land and this sense of life and movement is welcome.  Yet there is a story behind this, maybe they are just day dreams.  In  "Auspice" why is the hawk placed in such a way as to come in for a landing near a decorative nest box that would never do for a home?  What's more-  is that the hawk is right over a woman who looks up with something like anticipation or even anxiety.

Other subjects are handled as deft illustrations of situations like the youngster among the orange Japanese lantern flowers.  And in the center of this show there is a kiosk of sorts that displays for sale, hand carved wooden feathers ( for your nest ).  Some really interesting details about the wood used for this show stand out.  They are attractively painted, and some of the wood pieces fit together like a streamlined jig-saw puzzle.  Should I mention that her wood-burning is quite nice, she has a feel for the structure of feathers, and she seems to favor birds of prey and interesting combinations of flowering plants.  It is curious to see these flowers on the wings of the birds.  It is something a bit different than what you are used to seeing in the galleries around town, maybe with the exception of what the Olneys                     (  Don and Cheryl ) have created over the years.
Posted by Alan Singer at 5:34 PM 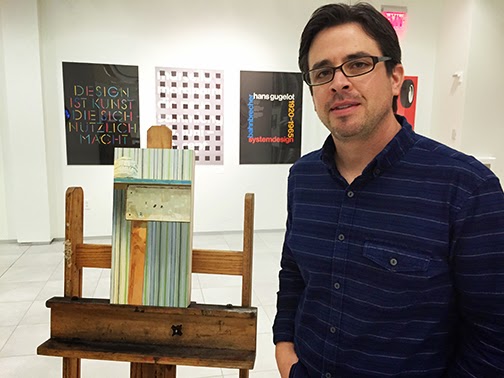 Brett Eberhardt stands by his art
at the University Gallery
R.I.T.

This week I had a lot to think about and much to be thankful for.  We are culturally well endowed in Rochester and at the moment the art scene is bubbling.  I am thankful for the opportunity to bring my art to the public, in my new show "My Visual Life" now on view at The Spectrum Gallery ( through November 29th ), and I am also thankful for having met a guest artist, Brett Eberhardt, who came to share his work with students and faculty at the request of Emily Glass.

Brett is a perceptual realist, who looks to elevate the mundane and the matter-of-fact in his paintings - a few of which he had on hand for his artist talk that he gave in the University Gallery this past Wednesday.  Brett is in good company because there are other gifted artists who share his sensibility, Catherine Murphy and Antonio Lopez Garcia come to mind in that regard.  A painting of Brett's shows a patch of floor boards and a wall vent, another features a gift box on an old painted crate, not the stuff of high drama, but rather calm, quiet determination to get all the details down while not overworking the subject.  Luckily, Brett could take some time away from his sabbatical to talk with us, and send us away with some valuable inspiration. 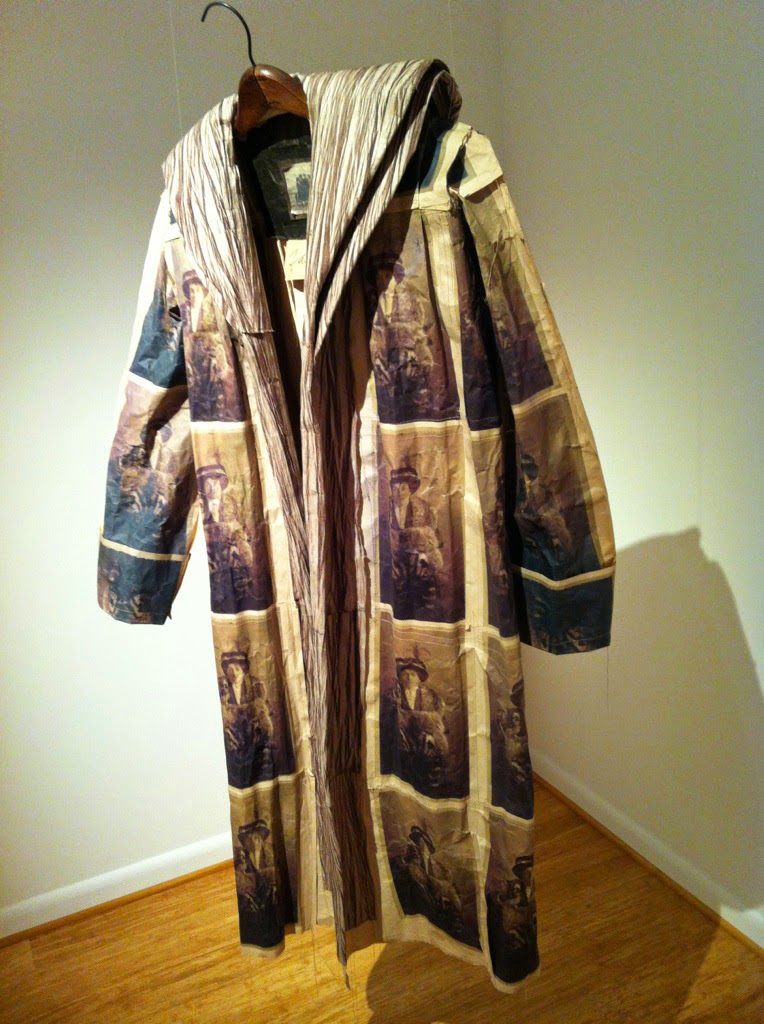 Sue Blumendale is also part of our vital art world with her new show now in it's last week at Axom Gallery.  Sue was also on the faculty at R.I.T. for many years and has her MFA degree in printmaking  from R.I.T.  The works she has created are like elegies for her departed relatives.  Her artwork in this show often is found in the form of a coat, dress, or other garment, and the fabric  is imprinted with archival photos of family members.  She goes back into history to rescue old photos that then are used as a way to reflect on who she is, where she came from, and maybe help her recall how she felt about the members of her extended family.  The colors are restrained while some of the emotional connections may not be.  This art reminds me of the archival artwork from someone like Christian Boltanski, and it is a moving tribute. 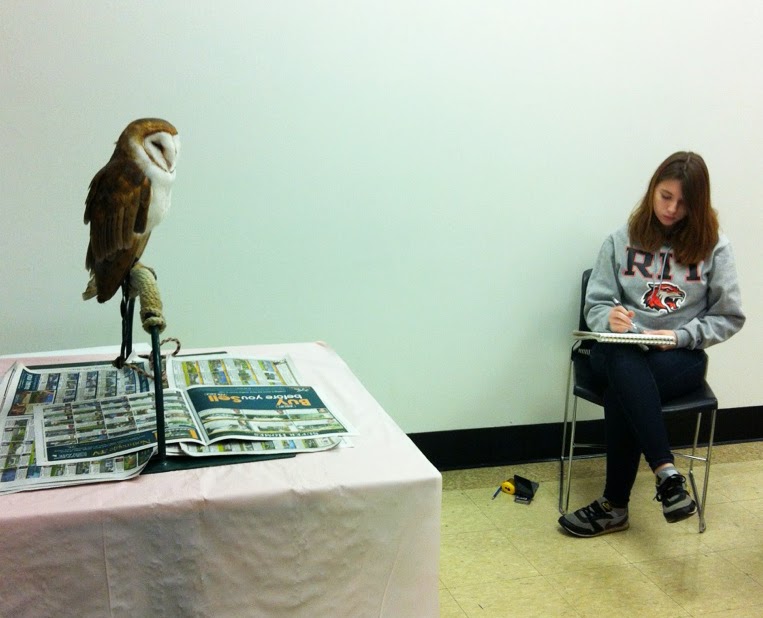 Another visitor came to my class this past week at R.I.T., and I am also thankful to the volunteers at WILD WINGS who brought live birds to my studio for students to draw.  Above, Melinda the barn owl was asleep, but sleeping or awake it is always a challenge to have the opportunity to draw from life, in this case bird life! 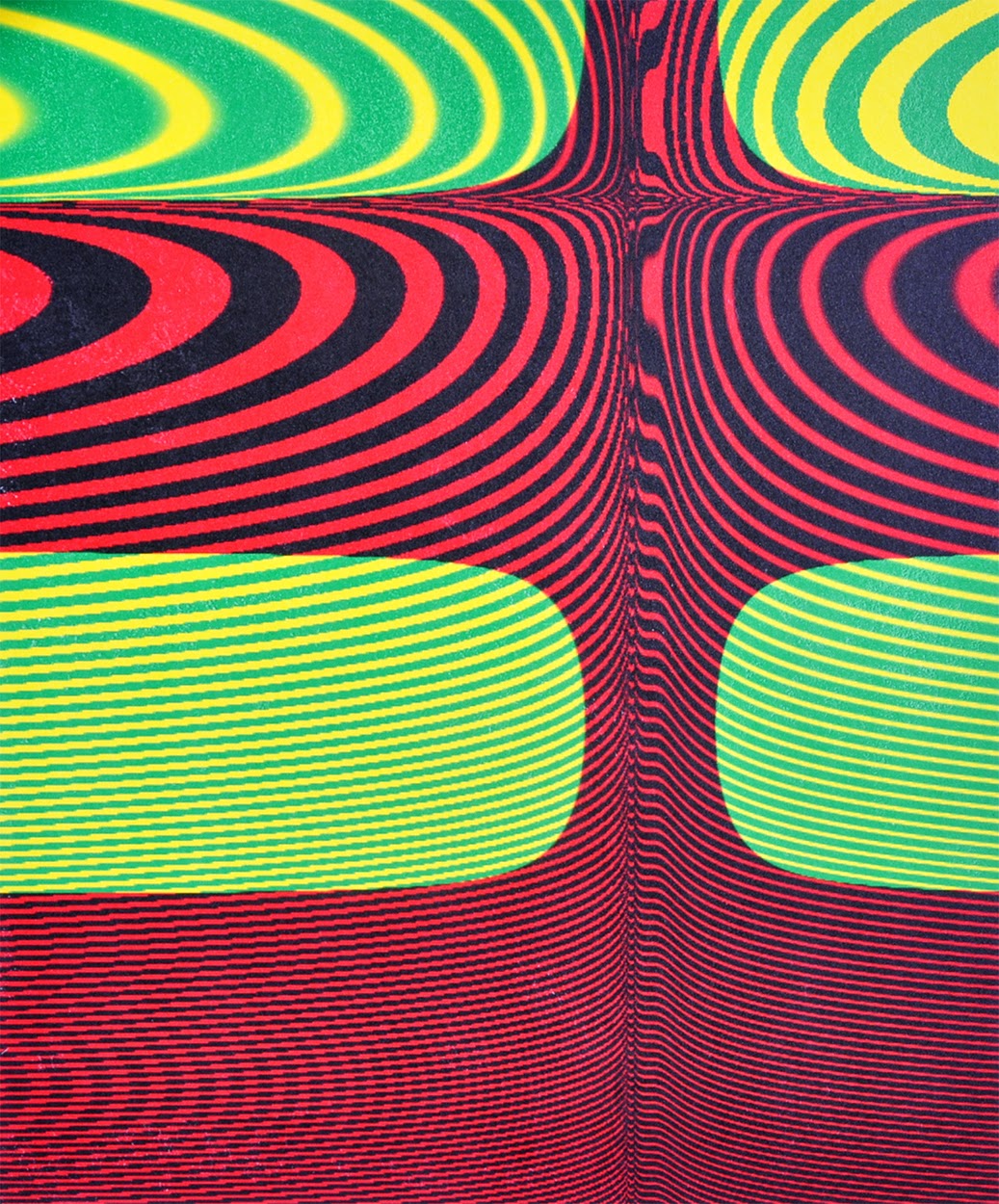 I had a lot to think about this week because I was also asked to give an artist talk, and from my perspective - I am swimming in the flow of this work and I don't often take a break to discuss why I do it and what it amounts to.  Many people who have followed my art want to know how I can go from very illustrative paintings to almost spare minimalist abstraction that is part of the show today.  I would say that I like discovery - and I don't mind it if now and again I take a hike.  One has to allow for growth, make some mistakes, learn from them, but take the chance to break through to something original, something you feel deeply about, something you can call your own ( even if this feeling is fleeting ).  So as I have said before in this blog, my new work that espouses mathematics is a bit of a conundrum ( right brain - left brain activity ).  I am a visual omnivore - I see potential in pattern, in nature, in science and mathematics, and I was schooled in the theory and practice of color and structure.  I am just working on something that I love doing, and hope others will come to see that too.
Posted by Alan Singer at 8:54 AM