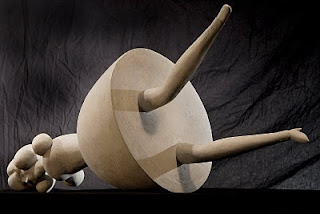 A parade of people are coming to Rochester this month to praise the Erie Canal as the engineering marvel that changed our land and spurred growth throughout the 19th and 20th centuries. The World Canals Conference will be meeting to discuss the future of canals and what their role will be in the 21st century and beyond.  "Re-Inspired"  an exhibition of art will accompany the World Canals Conference and travel to New York City and Troy after the conference has concluded.   The Oxford Gallery will extend that vision with a show titled "Waterway West", and both invitational shows will begin in mid September.

As a frequent visitor to the Erie Canal, I am pleased that there is a trail for biking, running and walking, and along the extent of the canal you can find vestiges of American history and feel a heightened sense of space.  The canal may be New York's most prominent landmark ( next to the Empire State Building) and yet its public purpose can be renewed and should become a vibrant feature once again.

Claude Fayette Bragdon ( 1866-1946) was someone who had a lifelong experience with art and engineering and a small collection of his work is on view in the Lockhart Gallery at the Memorial Art Gallery.  A collaborative and friendly relationship between Fritz Trautmann and Claude Bragdon is celebrated in this little show that highlights their accomplishments as artist and architect respectively.

Years ago I would have thought that mathematics had nothing to do with art, but seeing the work of Charles Bragdon could change all that.  His mathematical abstractions from the late 1930's anticipate much of computer/digital modelling  and his sense of color ( aided by his friend, the painter Fritz Trautmann) softens his Modernist tendencies.   In the end, these two American artists are nowhere near as extreme as their European counterparts coming out of the Bauhaus, nor as visionary as a Frank Lloyd Wright or Buckminster Fuller, even though the vocabulary is so similar.

Stepping across the threshold of the Main Gallery at MAG, the visitor is greeted by A.E. Ted Aub's sculpture as part of this year's Biennial honoring six mid-career artists.  Ted Aub is a teacher at Hobart William & Smith College in Geneva, New York and his five works in bronze and one in Hydrocal (pictured above) have a kind of cartoonish streamlining that reminds me of Art Deco and Elie Nadelman.
Like toys that are knocked off balance, Ted Aub's figurative sculpture brings an element of discomfort
along with the playfulness of his topsy-turvy world.

The spirit of play and light fills the next room with Anne Haven's contributions to this exhibition which include my favorite artwork in the show which is titled "Grace".  Such simple pleasures, but also eloquent and ethereal in the sound and movement of dangling silverware!

Should you be having too much fun looking around Anne Haven's mixed media pieces, you can always temper that with Alberto Rey's mural size paintings of dead fish  from his series "Aesthetics of Death",
or watch his documentary video "Biological Regionalism".  I think that the temper of this Biennial is  summed up in a little statement from Anne Haven's: between the priest and the jester.

There are appeals to our collective conscience in the mixed media art of Julianna Furlong Williams.  The human condition's of illness and mortality is never far away in the rugged statements made in a series of modestly sized works which can include handwriting, photos and gritty paint-handling.
Photos by Rick Hock, also communicate through iconic statements augmented in typographic
headlines: "NOIDEASBUTIN" (2010), and "WHAT I SAY GOES"( 2009).  There are some paralells here to the work of Barbara Kruger but without the sting of her confrontations.

Lawrence M. "Judd" Williams taught at Rochester Institute of Technology and has been a contributor to many shows in Rochester.  He was one of the artists featured last spring at the Rochester Contemporary Art Center in "Makers and Mentors".  Here "Judd" Williams  relief constructions of wood and mixed media comment on rhythm and number,  titled "Increment" ( One, Two, or  Three), and these works have a craftsman's sense of specific detail, while not being too fussy, trying to overwhelm us with technique.  The paintings of Sean Scully, and maybe cross hatch paintings of Jasper Johns come to my mind as I look at this work, but then I look away at the free standing complex called "Stacked Land"
and I am in a realm that neither of the aforementioned artists could have created.