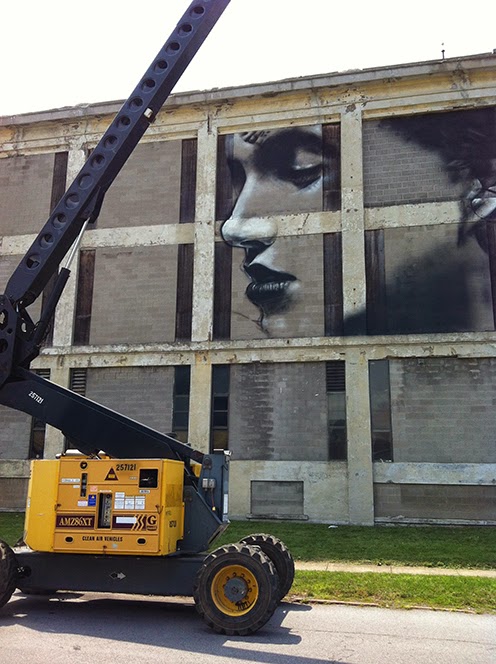 Let the painting begin....
Wall / Therapy hits Rochester this summer in a neighborhood near you!

Living in New York City years ago I experienced an explosion of graffiti that enveloped the subways and stretched out onto walls of any available derelict building.  The artists ranged from the unknowns to the soon-to-be-famous like Keith Haring, and Jean-Michel Basquiat.  There were hundreds of  taggers who just had to make their mark and some of this public art really deserved attention.  In recent years this kind of renegade art has met up with more sophisticated art school types who shaped a transgressive behavior of painting on someone else's property to meet their own needs and further their own careers.  I remember some of the first legitimate murals in New York City were terrific - Knox Martin had one on the West Side Highway in Chelsea for years.

In Philadelphia, which has a wealth of public art on the street - the murals spread around the city have become a tourist draw.  Teaching at R.I.T. I had the idea of painting murals as part of my class projects in illustration, and I put my ideas into practice.  I found sponsors for projects and my class painted murals on site for the group CASA ( in the municipal parking garage  at Family Court ), as well as for Literacy Volunteers, and for the local real estate advocates.  These projects happened almost twenty years ago, and now I can witness a whole new wave of large scale painting being orchestrated by Wall / Therapy. 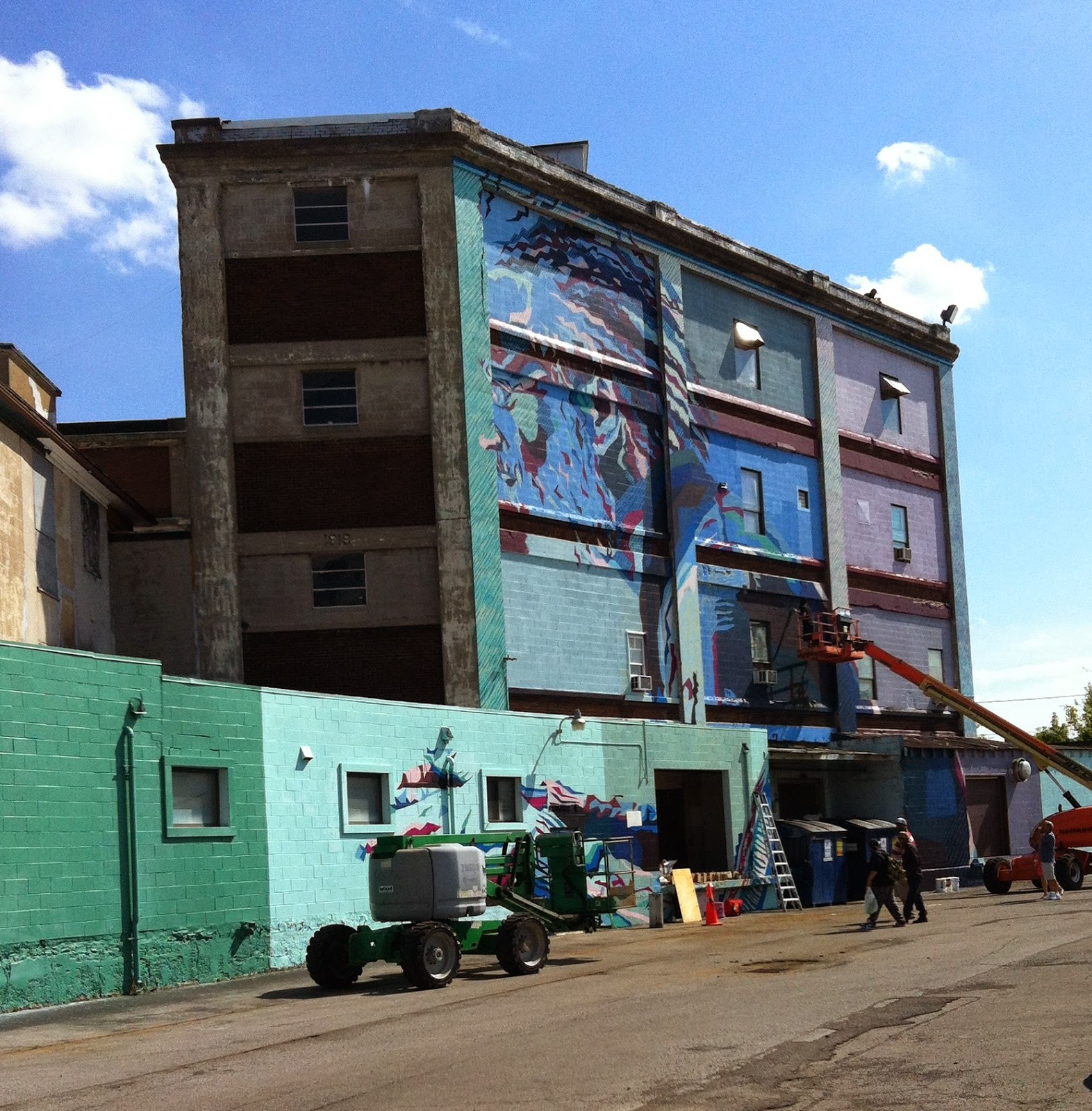 This summer's events include large scale murals going up in my studio neighborhood on East Main Street.  I see a three story mural going up a few hundred yards away from my loft in the Hungerford Building.  I also noticed a work on the walls of an old barn on North Goodman by David Walker.
If you want to see the work in progress you can find out who is doing what on their web site:
http://wall-therapy.com/2014-mural-locations/ 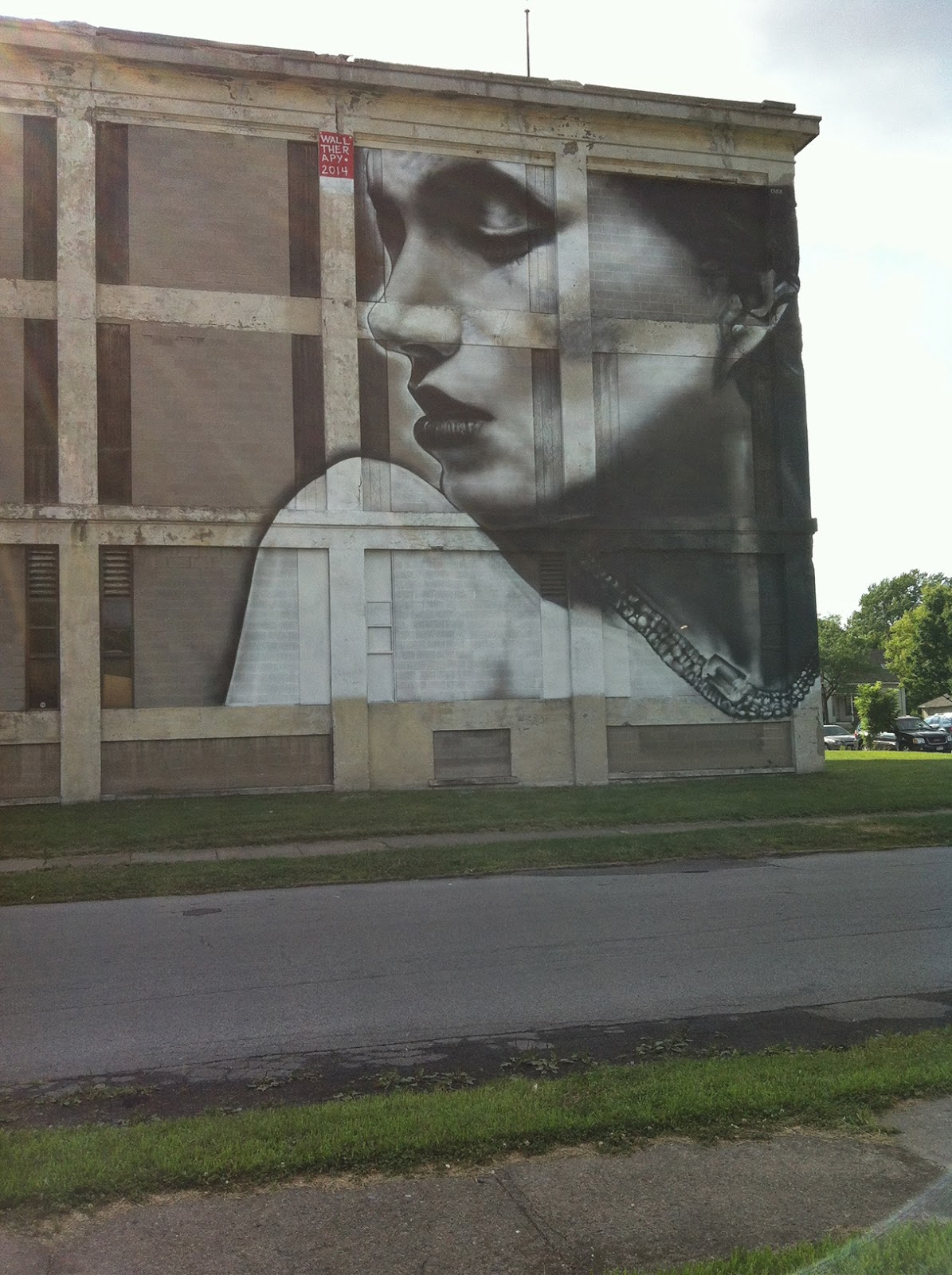 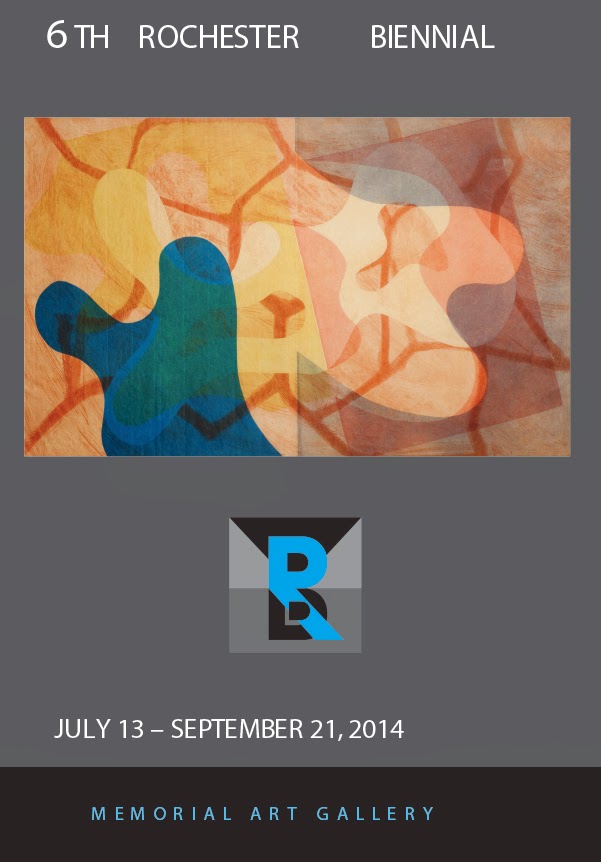 At the Memorial Art Gallery
the 6th Biennial

"I don't know much about art,
but I know what I like"

That's a statement you hear from skeptics about the art world ( and its economics ).  The whole art thing is a kind of a sham for them - and the people they think that prolong this mistake are often art critics - misguided journalists who don't have anything better to do.  So, some might point to the art critic and ask how they make sense of the vast offerings on view from artists all over the world - and that makes a point.  What is the job of the art critic today?  How can any one person stay on top of the art scene, and finally - what value is the art critic's perspective?

50 years ago people may have read Hilton Kramer ( New York Times chief art critic ) or Clement Greenberg ( in The Nation ) and from their writing the reader had a sense of what was good, and what wasn't - and these critics had some impact ( for better or worse ).  Today, there is no single path for a critic to take, and the art world is really that - a global marketplace and it is tough to get a handle on it.

Do many art critics know what it is like to produce a work of art today?  There are so many materials to take into account, and many points of view about what is relevant today.  You don't have to go far to see that the arts are fragmenting and it is a real job for the artist to get and hold someone's attention, and it is difficult for the audience to slow down and be sensitive to what is being shown.

A few years ago writers and critics like Robert C. Morgan and the late Arthur Danto were addressing the end of the art world as we know it.  Actually the practitioners ( artists at work ) must not have noticed, because there is so much more to look at, and to contemplate today.  Take for example the recent show that opened at The Memorial Art Gallery - their 6th Rochester Biennial.  Every two years a select group of artists are chosen to show us what they've got, and this year we have a printmaker, a painter, and four artists who work three-dimensionally. 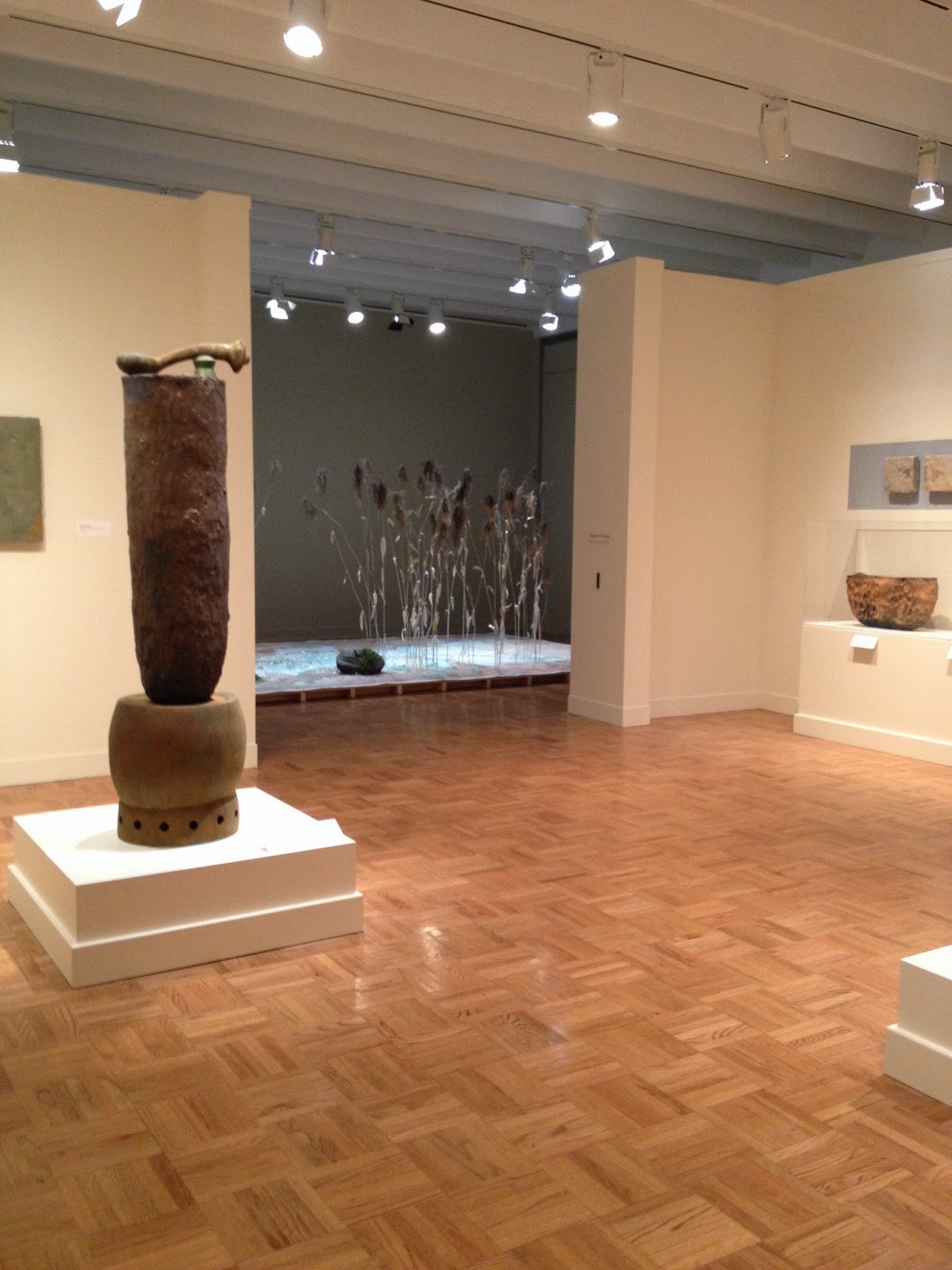 Inside the 6th Biennial

I've known some of the artists in this Biennial for years and I can applaud their work, and also the layout of the show - giving each artist some space to breathe - allowing the viewer to focus their gaze on the objects in question.   Kumi Korf, an artist from Ithaca, NY opens the show ( her work is on the card above, and the banner outside the museum ).   Kumi's prints are biomorphic abstractions - gentle curves and attractive color which she develops intuitively in series - one thing leads to another.  Her art creates a field for a poem written by Bhisham Bherwani,  part of the image displayed is upside down and the prints are titled "Delirium" .  Artist books are on view as well, and Kumi Korf's deft handling reveals some of her background in architecture.  Her books employ printmaking techniques and may include thread and photos, as in the 2012 work " Sea to Land" .

Moving in through the show I found ceramic forms by Richard Hirsch to be very rough and sophisticated at the same time.  Encaustic paintings on the walls in his space reminded me of the colorfield art of Jules Olitski.  These encaustic works look like slabs of sandstone right out of a quarry.  His "Crucible" series is impressive in size and these often oversize vessels are accompanied with ladles, or blown glass as in the " Mortar and Pestle" of 2014.  This art is all about tactility, and it makes me imagine the people who might use such equipment and how it might be used.  This is more directly addressed in the works called "Primal Cup" - and here the clay looks like a lesson in topology. Isn't that what clay is all about?  Something you can roll out flat or roll into a ball, or make a terrific texture or even a teacup.

Kim Waale's work in this show is all about artifice, and her installation included a pieced together map as a flat surface on top of which she placed faux rocks and phragmites,  PLUS a large plastic waterfall -
all deliciously absurd! 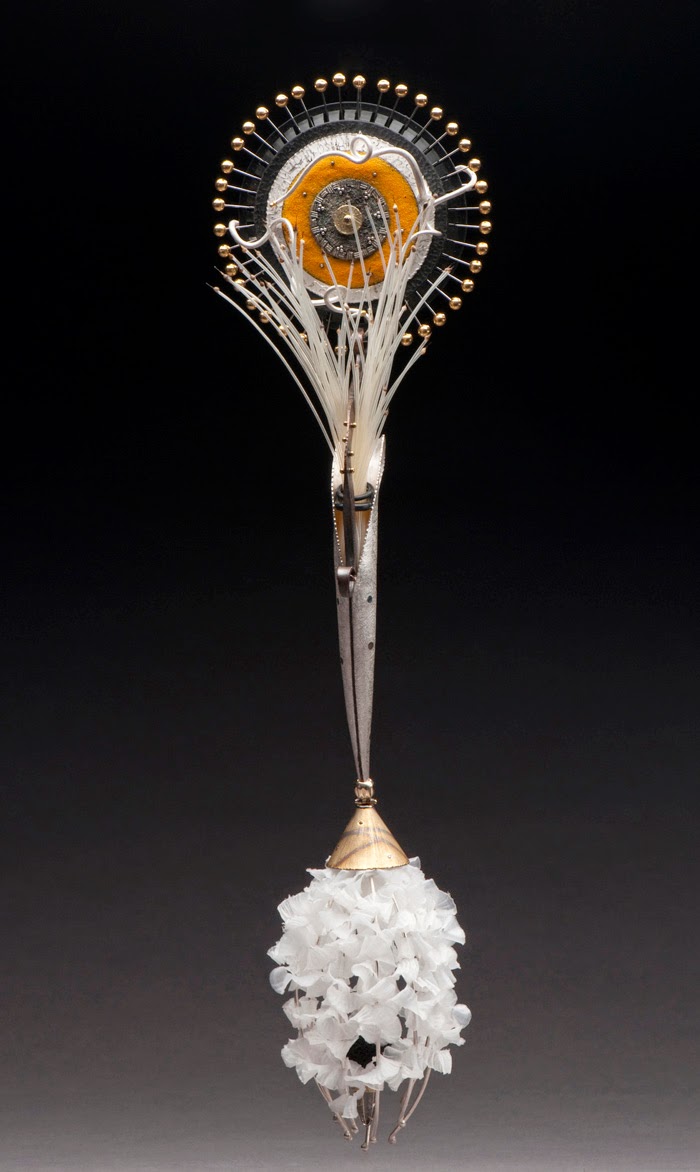 Juan Carlos Caballero-Perez hails from Mexico City, but has been at R.I.T. in the School for American Craft where he is now the Chair.  His talents are very detail oriented, and the artwork he has on display is fanciful, highly cultured, tactile, and alluring. Many of these are pieces of jewelry - though not in the traditional sense - they are meant to be worn, and not just looked at in a vitrine.  Juan Carlos is a gifted artist, teacher, and advocate for an open minded dialog about what art is and what it is going to be in the 21st century.  You get the feeling that Juan Carlos has absorbed many influences as he grew into the artist he now is, and his art makes this manifest.  The brooches he shows here have a painterly quality as if they had been imagined by Goya.

Across the way are paintings from Lynette Stephenson and they feature dozens of eyes looking back at the viewer in one of her canvases.  In another painting there are strange dislocations that probably contain a mystery or a story about a dog tugging on a rope with a watermelon, three people and some chairs.  These seem like the ingredients for a short story which we get to make up as we go along.  Her strategy here owes a great deal to David Salle, who made this kind of ironic juxtaposition so popular in the mid-1980's. 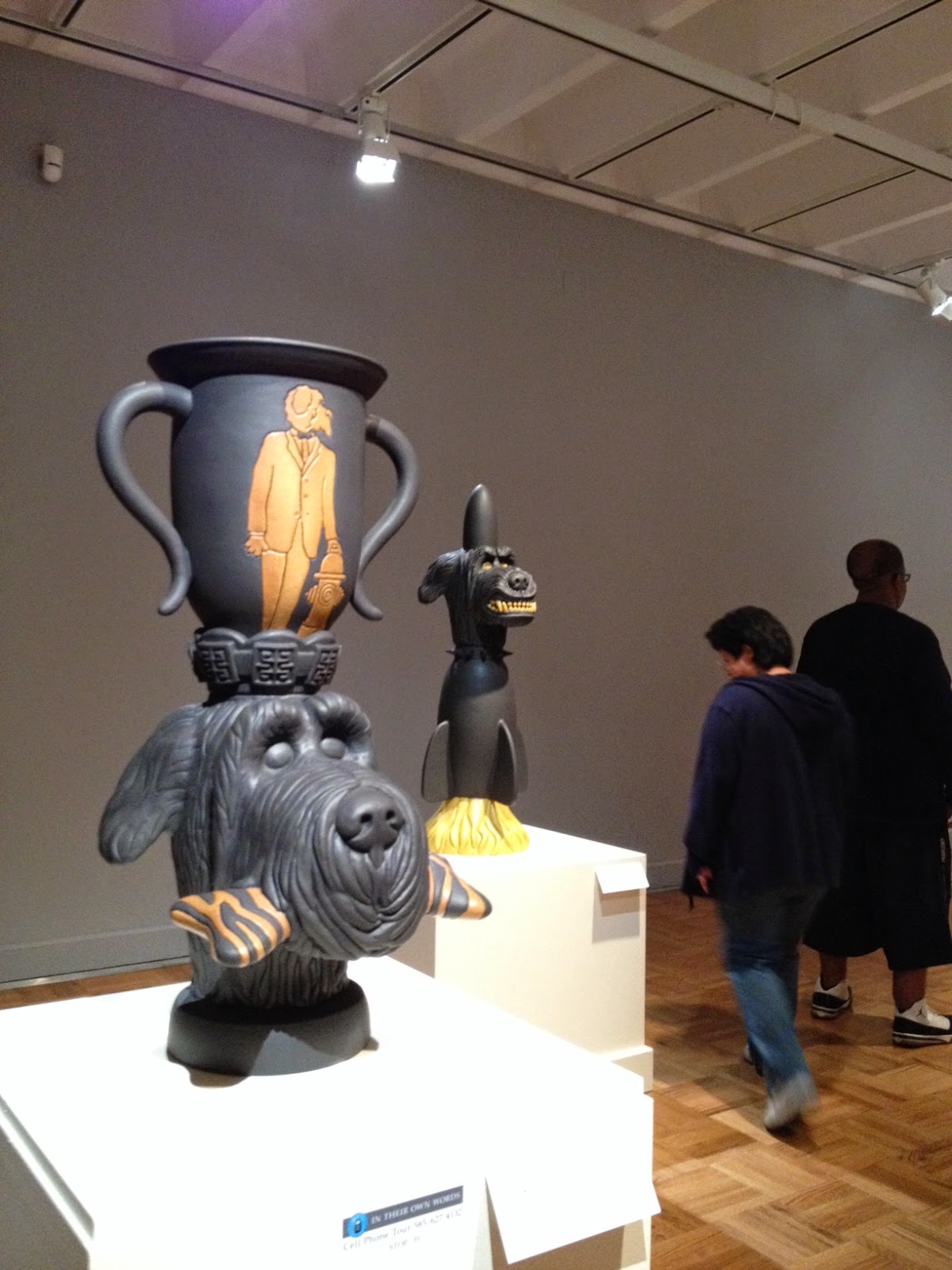 Earthenware with glazes by Jeff Kell

Looking in the last room I found several works from Jeff Kell who is also associated with R.I.T. and the School for American Craft.  His art is like a 3 dimensional illustration using clay as his medium, with an unusual humor that could work in a magazine story.  At this Biennial there is something for everyone, so if you don't relate to this work, you just might resonate with something down the hall.  These artists have earned a place in the spotlight, go and see for yourself.

Several years ago I met Sterz Imrie for the first time - he was looking at a work space in my loft building in Rochester, and it wasn't long before he moved in with his young son, Calder.  I think Sterz moved up from Brooklyn as I had done, and it was obvious from this first encounter that he was an unusual sort, - he was recovering from an operation that left him partly disabled, and I later found out that he had been exposed to a toxic pesticide and had suffered from a brain tumor.  We shared our stories, and he looked around my studio and became my next-door-neighbor.  Bringing up his young son in this rough workspace, while trying to develop artworks, and stabilize his condition was more than a full-time occupation, and he needed help.

I once had to lift him up because he collapsed on top of his son, and there were some other incidents, but basically Sterz had courage and strength and wasn't shy.  Sterz also had some real world experience in fine art though he said that he was self-taught.  He made serious - thought provoking installations and videos which still stay with me.  Sterz also spent some time as an artist-in-residence here at the Cobblestone School.

I once interviewed him for a book I was writing and I went to see his art when he had shows in our area.  He made an installation once in the Hungerford Building that consisted of suspended chunks of ice in plastic sleeves that steadily dripped down into big circular pans that caught each drop and amplified the sound for anyone who came to view what was happening.  This was a solemn, profound, and moving experience to witness this piece of art.  There were other shows including one at The Rochester Contemporary Art Center, and many others in Miami and in Europe.

Sterz was a sculptor who made videos, and he explored the use of the computer as a tool when it suited him - but he could just as easily use a fan blowing on a sheet of plastic and make something out of that.

The important thing for me was his character - this was a person of great courage and conviction, and through his ordeal ( several operations ) he never wavered in taking care of his son who was growing up, and also he was engaged with the world as a thoughtful, and respectful person as you will ever meet.  He will be missed, passing away on July 4th; he leaves behind many indelible memories, and we are stronger for having known this man and shared this space and time.
Posted by Alan Singer at 11:53 AM