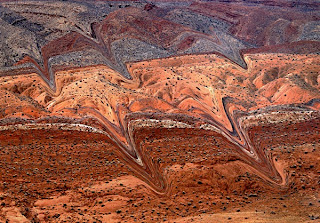 It should come as no surprise to anyone who has been looking around museums and galleries for contemporary art these days, that the energy revealed is so scattered, the focus is so personal, and the methods so diffuse, that this era could be summed up for its ephemeral art.

The aesthetic of early 21st century art is more ambiguous than let's say the irony of the 1960's.  Maybe I can catch a thread of a story first told by Marcel Duchamp and carried forward through Robert Rauschenberg and made manifest in the art found in the shows titled "Alternating Currents " presented in venues around Buffalo.

I do find an art of sublimation, an art of aura, with an atmosphere of indirection in the exhibit which is celebrated under the larger aegis of "Beyond, In Western New York" when I recently visited the Albright Knox Gallery.

The show does touch on a few real experiences, one of which I found in a drawing by Joan Linder of an office (at a mortuary?).  Joan sets about trying to create a match between her drawing ( all those obsessive little lines) and the rather mundane equipment found in the outer office with notes tacked up on shelves -highlighting cremation services- amid boxes of latex gloves that serve as bookends. 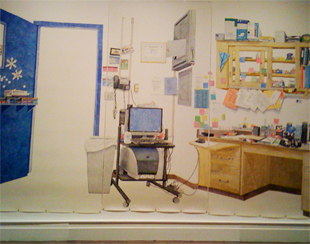 Kai Althoff contributes a menagerie of sculpture on a circus theme - a large lady made of wire bends over backwards - and immediately my mind reverts to Giacometti's "Woman With Her Throat Cut".  Maybe it is the grim atmosphere outside the museum that clouds my vision, I just can't feel the necessity of the cage with the playful lion, except that it gives a friendly nod of recognition to Sandy Calder.

Sheldon Berlyn's colorful abstract paintings remind one of the formalist days, but these paintings sometimes are too thin, and I really prefer David Reed for a good gestural sweep, or even someone like Polly Apfelbaum for a new color-field experience.  Victoria Bradbury on the other hand did sound a deeper note of history; of nostalgia, and employs today's technology to revise our notions of what a photograph can signify.  The painterliness of this installation is informed by processing software - which is the magic lantern projection of today, here using images of a bygone era conflating past and present.

James Carl's sculptural presence is welcome in the present company because of its primary focus on form.  Overlapping and creating woven patterns of plastic window shade/blinds isn't a unique idea ( I think of Martin Puryear) but at least Carl's sculpture lends tangible form to a very understated exhibition.

Richard Huntington's paintings mingle with the old masters of modern art to a great and subversive effect, especially as a next door neighbor to Matisse.  A funny "Our Lady of Perpetual DeKooning Shapes" at least got me to chuckle, a rare thing in this dissolute gathering of regional art.

Leaving that all behind me, I travel down Elmwood in Buffalo to Nina Freudenheim Gallery, and walk into an oasis of photography by John Pfahl.  I have been following his work for years and recently I see that he has revisited his "Altered Landscape" series with experiments taking old images and reworking them by applying blends, and digital blurs; making the earth malleable and "plastic".


Suddenly, photography is an expressionist canvas in which anything can happen.  In a few instances this concept is almost indistinguishable from reality, as in the lava forms found and photographed at the Kilauea Volcano in Hawaii.  Some images have been subtly exxagerated, other images like "Lower YellowstoneFalls" verge on kitsch.  My favorite images from Cedar Mesa in Utah, remind me of color field paintings, very frontal and tactile. 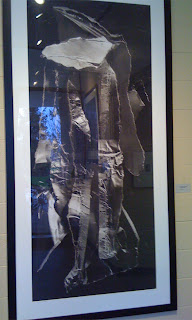 Carl Chiarenza in the Dean's Gallery
at R.I.T.

Unless you work at Rochester Institute of Technology, and happen over to see Dean Frank Cost of the College of Imaging Arts and Sciences, you probably would never know of the Dean's Gallery.  It isn't much more than a modified hallway that allows Zerbe Sodervick and her Gallery Management class to mount shows mostly of alumni art.  This season we have been treated to a wonderful showcase for Carl Chiarenza which he aptly titles "Ephemera" ( which comes full circle to my earlier characterization ).  You may know Carl's work from his many books and exhibitions ( some of these books- lavish portfolios- are included in the exhibit).  Carl says of his work, " My process creates form and subject simultaneously", which might sound like a formula but really isn't.  What Carl does is create collages  (which are later thrown away) and photographing his artwork at very close range - leaving only the photo as evidence that a collage ever existed.

So, there is a dynamic and a value placed on what remains; the photo is the final state of affairs for the performance of this art that owes a debt to the cubism of Picasso, Braque, Schwitters and Anne Ryan.  Carl's artwork is so intimate, so improvisational, and also at times presented on such a monumental scale ( especially for something so humble in its origins) that it is viewed as completely transformational- and for that,  it simply must be seen.