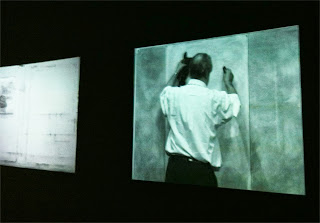 William Kentridge
at the Hartnett Gallery
University of Rochester

Ten short films projected at the Dryden Theatre in the George Eastman House make quite an impression when they are from the hand and mind of William Kentridge aka Soho Eckstein.  Soho is Kentridge's alter ego and represents in these films a most unlovable aspect of humanity, the villainous capitalist throwing food scraps to the poor.  During the show this past Wednesday there was a special magic in the air because the artist himself was sitting in the audience and we could engage with him in some Q & A after the films.

The images in these ten films seem to be tied together thematically, with one of the major characters being the place - or nonplace - where all the action emerges be it the city of Johannesburg, or a lonely room, or a road to the outback.  Many times Kentridge's images seem to want to penetrate to the core even if this is done in a diagrammatic way, or sometimes a violent visceral way - the audience is engaged and challenged at the same time.  We have to deal with expressed feelings of inequality, evil capitalism, urbanity, the fragility of life, all seen through a poetic prism of the cinema.  Then after the screening we have to hear from the author himself who says he relies too much on the black cat trope. 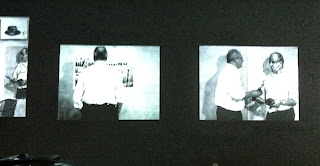 The Q & A with Kentridge was most enlightening.  He volunteered that he backed into the role of filmmaker - animator ( he never studied animation ) but that is what his films are all about: movement and the duration of time exemplified by the way he semi-erases an image to indicate forward movement - and we get the partially erased ghost image as the rest of his drawing moves ahead ( this is hard to express in words - you have to see it unfold! ).

If you want to get a good sense of what Kentridge is doing - see the screening this month in the Hartnett Gallery at the University of Rochester, in the Wilson Commons - the films are being projected and even though they are on a smaller scale here than at the Dryden, they are still inspiring!
I have seen clips of many of these films with the exception of the most recent one - and his short films have been made over a period of over twenty years.  During that period he has also been involved as a printmaker, and scenic designer for opera like Mozart's "Magic Flute", and Shostakovich's "The Nose". 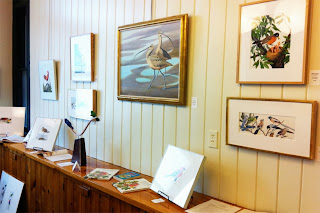 "Bird is the Word"
exhibition at Ock Hee's Gallery in Honeoye Falls, NY

In Honeoye Falls I have the chance to present a little group of my early artworks at Ock Hee's Gallery - which is a wonderful old railroad building with sprawling gardens and outdoor sculpture all around.
"Bird is the Word" is a group show which includes my student Eunice Hur, along with the other artists Jerry Alonzo, Belinda Bryce, Kurt Feuerherm and my father Arthur Singer.  In the 1980's I worked with my father to produce many of the works on view as a true collaboration and the results were published in our book "State Birds" also available at the gallery. 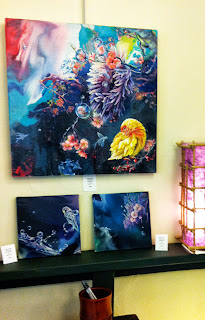 Art by Eunice Hur
"Bird is the Word" at Ock Hee's Gallery, Honeoye Falls, NY
Posted by Alan Singer at 7:41 AM