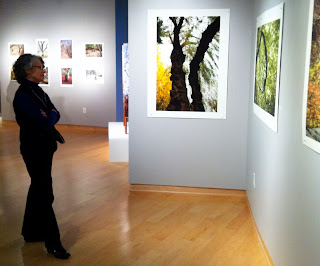 Striking new photographic images are on view in the galleries this month, so I went out to look over some shows starting with "Tree as Photograph" by Larry Merrill ( through December 8th ) at Nazareth College Arts Center Gallery.  Once in the gallery, I also see trees on a folding screen, and photographs of trees presented as free standing objects on low pedestals - all of which point towards an open interpretation of the photo as more than just something that sits in a frame on your wall.  In fact, this show does without frames for the most part, and the lustrous color prints are presented with a white border around the image that separates it from the wall in a nice simple fashion.

Larry Merrill has an eye for detail and color, but what I am most struck by is the abstract quality of his compositions which owe something to an almost painterly framing of space like what one might find in a work by the artist Clyfford Still.  The trees that Larry Merrill has in his viewfinder have dynamic organic character and the spaces between trunks and branches are sensitively captured.

Gallery r  at 100 College Avenue has a life lesson for all gallery goers who come in to experience the show titled "Becoming Visible" by Jessica Catherine Lieberman ( there is also a book for sale at the gallery by the photographer ).  The show is on thru November 27th.  This is a test of endurance for the person who has been diagnosed with a lethal disease, and we get to witness this through the documentary quality of the photos that portray gradual stages of treatment along with wall labels ( essays really ) that feature established protocols of pain management.  This is a strong show and the viewer leaves with a deeper respect for the transient nature of our lives on this planet. 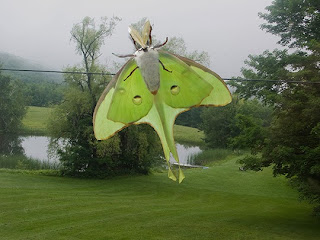 Next door, in the Spectrum Gallery at Lumiere Photo,  Joan Lyons has a colorful series of sequenced photo montage works on view that create an image in the mind akin to haiku poetry.  Each photo has a little shift in perspective - a composition in her work might have a photo of a painting on the right hand side and then on the left there is a purely photographic image giving the total composition a different meaning.  Is this the activity of metaphor?  This is like this?

I was attracted to Joan Lyon's photos of painted murals on the sides of buildings and the funny dislocation in these images moves me off into a provisional space neither here nor there.  It is into this breach that the feeling of art resides - perhaps it is just the sensitivity of the artist at work and how she captures my attention.

The large Luna moth in one photo makes the space behind it more palpable, while in another photograph across the room decorative coy fish are superimposed on a watery world on a slightly different scale.  There is a wry humor and comparison drawn in another composition where a painted prehistoric jungle bumps up against some scrubby palms in a scene right out of the Everglades.
It is Before and After, similar but different. Melissa Huang
at The Arts & Cultural Council
for Greater Rochester

I want to take a moment to congratulate all of the students who participated in the juried show in the gallery at The Arts & Cultural Council that also opened on November 1st, right around the corner from the Spectrum Gallery.  Local teachers can be proud of students who have the chance to show their artwork and offer the opportunity for us to view these creations by an up and coming generation.
Posted by Alan Singer at 7:50 AM