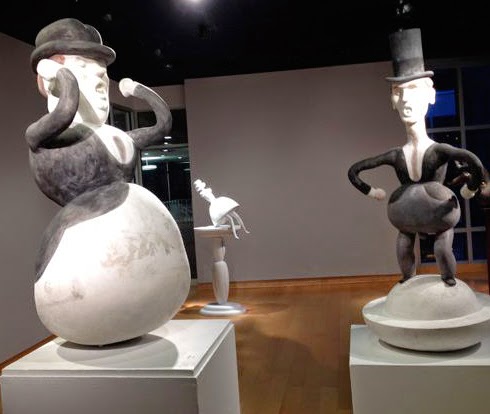 This is a conversation that I like to come back to and pick up where I left off.  Art is a dialog with those who are present ( to engage an audience ), and Art also gives a hint towards the future ( if you can read the subtext ).  Artists! - owe a debt to the past and sometimes consciously maintain ties with art history; social history, and much more.

Ted Aub is one of those artists who delights in the family resemblance of his sculpture with the work of the past, and as I mentioned to him at his opening ( and he agreed ) his pieces have a real correlation to the figurative art of Elie Nadelman.

There are also popular cultural artifacts to contend with here and Ted Aub does not demure.  Bobble-heads and toys of the past come to mind, as does the Laurel and Hardy presence of Ted Aub's most recent creations: the two large works titled: "More is Less" and "Less is More" in the center of his new show which opened at Nazareth College this past Friday ( Friday, October 3 - thru October 31).  Both of these figures could rotate and wobble on their curvy bottoms ( but they are secure in one place for this show ).  It is not a coincidence that Ted Aub talked about enjoying the Jeff Koons show in the Whitney Museum in Manhattan.  The two artists share some similar concerns, and a certain irony. 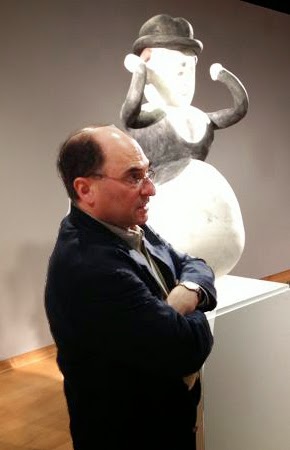 Somehow Ted Aub's portraits have a bit of the New Yorker Magazine character in them, and a lot of Brancusi.  Just take a look at the hand made pedestal in "Thumbs Down" - isn't that a quote from "The Endless Column"?  And what about the heads?  Some of the shock of those little heads by Brancusi echo in the sculpture of Ted Aub - but then there is the disarming title: "Dammit I'm Mad"

Other figures in this show titled "Objets Irreal" are deliberately off balance -and on their topsy-turvy way to another state entirely.  I am also struck by chords that harmonize with some Art Deco concerns that inform some of the stylizations here as in the black head of a women titled: " Muse euM. She greets you at the door, and she is a dark bronze that can look from a distance like the letter C. 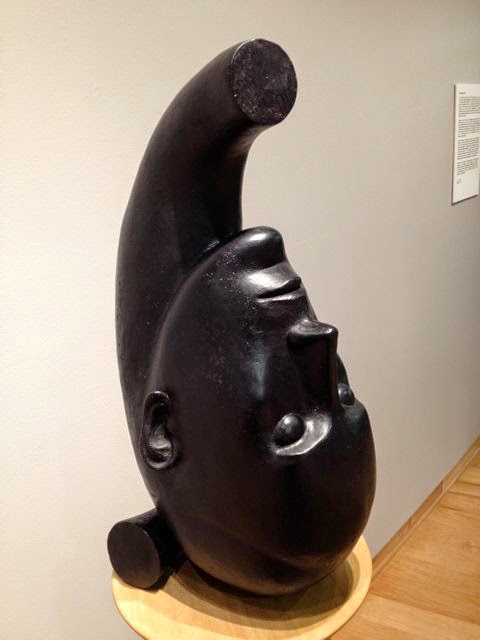 Around the corner from the sculpture gallery with Ted Aub is a show of paintings by Michael Bogin.

This presentation is in the Colacino Gallelry until October 18th, so you only have a week or so to catch up with it.  This suite of paintings on paper is titled: "Galapagos" and while they are all abstracts they celebrate these Pacific Islands with shimmering color and what appear as glints of light as if your glance was bouncing off water.

painting by Michael Bogin in "Galapagos"
at Colacino Gallery
Nazareth College
Posted by Alan Singer at 11:25 AM