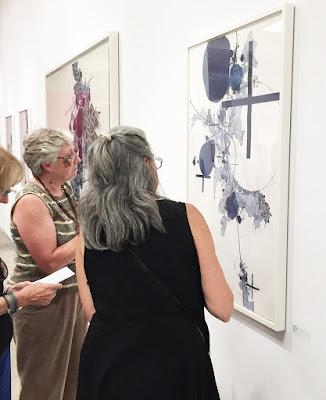 I strolled into the opening of "Brooklyn Bridge" at Rochester Contemporary Art Center last Friday, and was engaged in conversation with its Director, Bleu Cease.  He described an artwork we were looking at inside the gallery - a very complex wooden crate that could hold a life-size human - in a specific action -  a fumble by a football star that has become a sports legend.   In a way this is a parody of Marcel Duchamp's " Woman Descending a Staircase " - but seen inside out.  When you look at the precise way this crate is built you get an idea that the artist Norm Paris, is obsessed with cubist form, or shall I say the space around a form, and how to carry that form just so - so it doesn't get stressed ( the poor dear! ). Artwork by Norm Paris at RoCo
part of the "Brooklyn Bridge" exhibition
in Rochester, N.Y.

At RoCo the opening was very interesting - especially when I was talking with Derek Lerner, one of the artists whose work was featured on the long gallery wall, and when you get up close to his drawings, you suddenly realize that all this work was done with ball point pens!  How much patience do you need to cover that many feet with a ball point pen?  I asked the artist whether he considered using another medium to do these drawings, and he assured me that he couldn't find another way that would satisfy.  His drawings have a relationship to maps, and also to a kind of target practice looking for specific places   ( to drop a bomb maybe - like what you might have seen in old movies about radar screens and such). 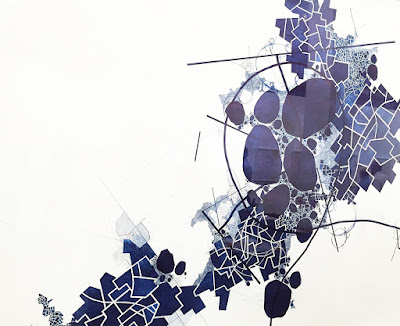 I also found out from Mr. Lerner that his ball point drawings have been well received, and he has won a coveted space to show his work - a commission for large scale mural size images under plate glass that will hang along the Avenue X Station on the F Train subway line in Brooklyn, N.Y.  He will join a fleet of well known artists like the Starn Twins, and Elizabeth Murray among others, in the use of the subway platform as a kind of alternative gallery space. 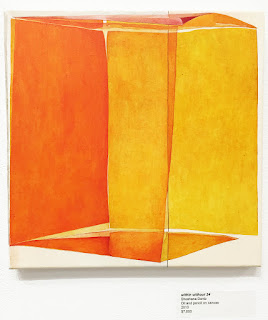 Painting by Shoshana Dentz
at RoCo

I stopped to look at the small paintings from Shoshana Dentz, and in reading the wall label, I understood that her paintings were all related, and that they stem from initial perceptions of a three dimensional form she built out of translucent materials, that was then folded and held upright as the model for her artwork.

A special mention should be made about the tribute to the artist Rick McKee Hock, and the satirical drawings on view in the RoCo Lab Space.  Poking fun at the competitive element of the big time Fine Artists, these drawings have such a sharp wit - it is a wonder that they haven't been more widely seen ( like on the cover of an art magazine for example ).  Mr. Hock passed away earlier this year, and he was evidently highly regarded for his work in photography as well as these drawings.  Along with these  "portraits" of artists are some wonderful small notebooks  covered in sketches with ideas for new drawings and notations for his ongoing series called:  Artist vs. Artist, reminding me of Spy vs. Spy in my old Mad Magazines. 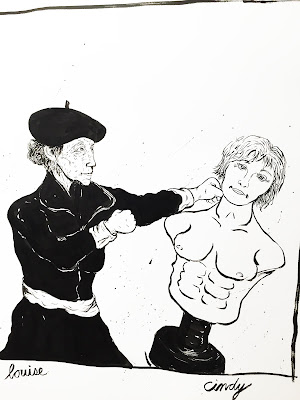 Liz Jaff's portraits of folded paper were in the minimalist representational vein ( a modern day Morris Graves ) and I admired her economy and her aesthetic, but I wished to see something a bit more complex and challenging.  On the other side of the equation, Richard Garrison gave me much complexity, data points  and found poetry, but the images he developed left me cold.  I would also like to mention that this show was created in partnership with The Memorial Art Gallery, and Robert Henry Contemporary of Brooklyn, New York.

At Axom Gallery I had fun talking with Rick Muto about his new Italian landscape paintings that he just brought back from his first painting trip to Italy.  Mr. Muto is co-founder of the New York Figure Study Guild ( introduced recently on WXXI TV ) and they will be having their 8th Annual Show this coming September 11-19th in the Steve Carpenter Gallery, 176 Anderson Avenue, in Rochester, New York. 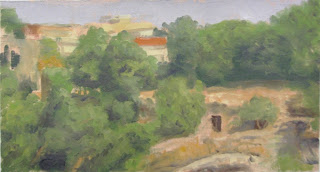 You can always learn something from artists who feel free to speak up.  For example, when I attended the opening of a new show at Ock Hee's Gallery  ( I wrote about this in my last post ), I found out from the photographer PJ Pennewell that the photo of his that I liked so much really is made from three sections of the same scene using a new app for his smartphone called "Layout".  He automatically pasted together the three images to create something new. 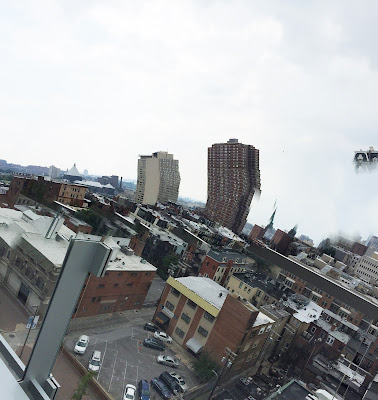 I saw how this feature works myself when I was in Baltimore last month and created a photo using a similar function.  This time I made it appear that there had been a major earthquake in Baltimore.  Given the news coming from that city, it gives me pause...  Can we ever believe what we see in a photo anymore?  What do you think?
Posted by Alan Singer at 11:08 AM