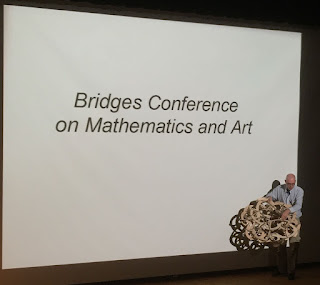 George Hart began his talk in Webb Auditorium on Thursday evening this week with a statement about his mathematical sculpture.  He says that he sees mathematics and art as really the same subject, and then he went on to show the audience some of his recent sculptural artwork.  He brought to the talk some 3D printed samples of his symmetrical constructions and a larger work in wood which evidently had been put together earlier in the afternoon with some student help. 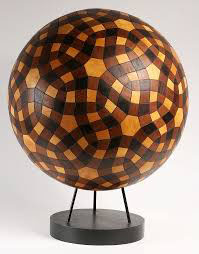 George Hart's talk was presented as part of an ongoing series supported by the John Wiley Jones Science Endowment Fund.  Dr. George Hart is a distinguished lecturer at Stony Brook University on Long Island.  He is also the organizer of the annual Bridges Conference that I wrote about last summer, as well as being the co-founder of the Museum of Mathematics recently opened in New York City. 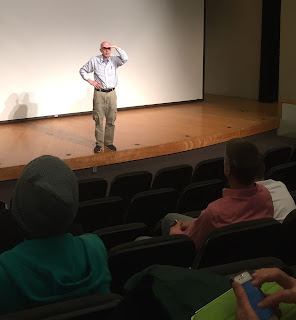 George Hart answers in the Q & A

Interesting structures are presented during the evening but little of the underlying math that determines what the structures will look like when they are fully realized.  Years ago I became acquainted with George Harts' artwork in a book called "The Visual Mind ll" published by the MIT Press.  This book helped me find a path towards using mathematics as a tool to construct forms and it opened a door that I did not know existed.  But once you cross that threshold your art can be aligned with a very powerful engine, and I think the art that George Hart brought to the audience this evening is evidence of that power.