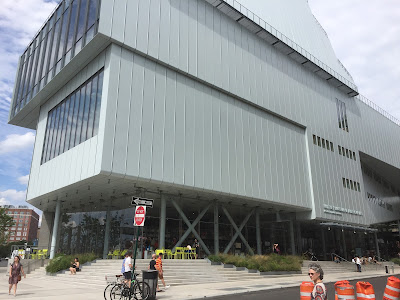 Though I was born in Manhattan, I don't get to visit my city often since I moved my family upstate years ago, but when I am there I like to make the most of it.

When I was a teenager I would walk everywhere in the city and I usually brought my camera.  I frequently decided to walk through the "Meat Packing" district which is way over on the west side along the Hudson River just above the West Village.  I would love to make photographs and contemplate the scene; there was a railroad trestle that snaked through buildings and freight trains would roll in and unload their contents into the giant refrigerated buildings in the area.  Trucks would come and distribute these goods all over the five boroughs and beyond.

Now many years later the texture of life has changed along this area in Manhattan.  The railroad trestle has been turned into the highly successful High Line which is a great attraction, and the new Whitney Museum of American art opened last year to much acclaim.  Their building by Renzo Piano
we would see in various stages of construction, but now we were parked a block away and we walked over to the new Whitney Museum for an in depth look.  The building is bulky like some of the container ships that make their way into the N.Y. Harbor, but when you get inside it is spacious and open and doesn't detract from the experience or distract you like the curvy Guggenheim. 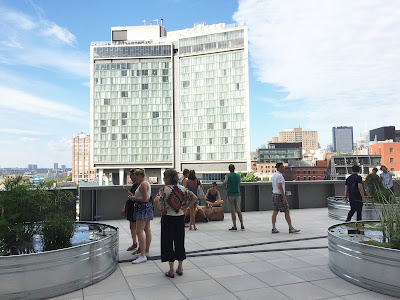 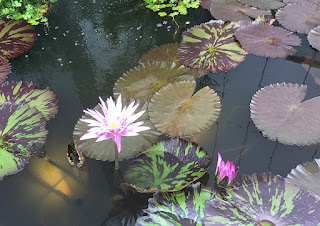 The Whitney Museum presents a different profile from every vantage point outside and there are a series of balconies facing East where once you are in the museum and need a break, you can walk outside and sit and have a drink or just take in the skyline ( which has changed dramatically in the last few years ).  Over this summer a series of water gardens in metal tubs by Virginia Overton are on view.  She lets nature take its course and we get the benefit of seeing water lilies bloom on the fifth floor of the museum ( Monet would be jealous ). 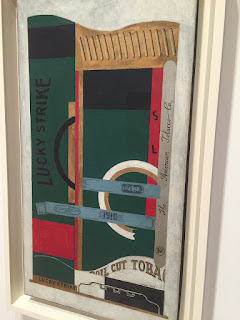 The main attraction for us at the new Whitney, is a show with the work of Stuart Davis called: "In Full Swing", and it did not let us down.  Stuart Davis went through a number of early stages not represented in this show which is dedicated to his mature style which one could claim is part cubist design and part hard-edged proto-pop art.  Stuart Davis paintings stand out in that they are also a kind of representational abstraction - symbols of an industrial culture with an inflection of jazz music in there for good measure. 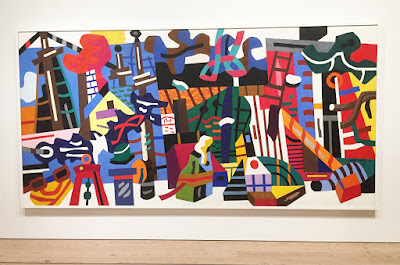 The Whitney Museum presents a spacious selection of Stuart Davis's most commanding art including large scale mural works sponsored in part by the WPA ( Workers Progress Administration ) which put artists to work during tough economic times.  I wondered whether Davis's left leaning politics got in the way of his success after these mural commissions came to an end. 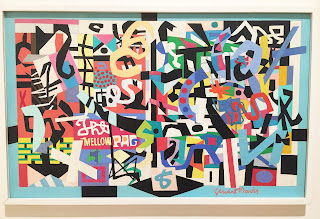 "The Mello Pad" by Stuart Davis

"In Full Swing" starts off with semi-cubist works incorporating graphic designs of cigarette packages and detergent, and this theme of packaging re-surfaces later on in his career when he received an assignment from Fortune Magazine to create paintings about the packaging of goods that we take for granted in advertisements everywhere. 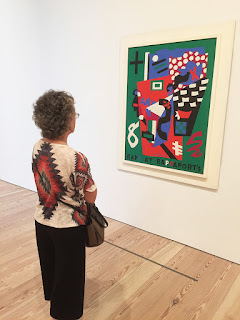 Rapt at the new Whitney
with
Stuart Davis

Elsewhere in the museum they are presenting a collection of portraits from their archive, and this is a sprawling group show which reminds me that figurative art is in the ascendant today.  I stopped to look at Edward Hopper's portrait, Robert Bechtle, and Fairfield Porter's work to name just a few of the items in this selection.  Something that stood out for me was the Rochester-born artist Florine Stettheimer and her carved wood frame and upbeat color that looked so tropical.  This is an unusual artist that deserves more attention. 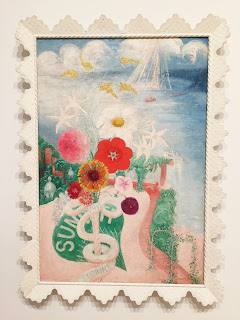 I should also stop to say that the inside of the new Whitney Museum is an open layout, the wood floors are attractive, and the lighting is sufficient.  I found nice surprises at the museum but the day was so beautiful we decided to go for a walk on the High Line downstairs. 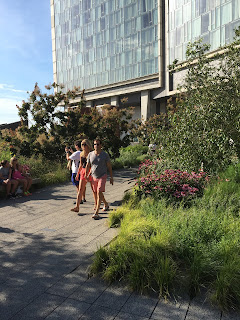 Walk along the High Line

Today, the trains are gone, but in some places the train tracks remain, and if you have yet to walk along this elevated park - you owe yourself this great pleasure.  It is a way to see New York City that you just haven't done before, and on this glorious sunny afternoon it was a pure pleasure.  Along the route there are little cafes, and even a water feature to cool your feet. I can't say enough about how I enjoyed this jaunt to my old home town.
Posted by Alan Singer at 7:37 AM