Printed Ceramics, Mirrors & So Much More 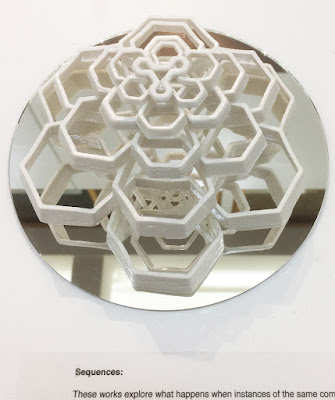 Twenty years ago, with my class at Rochester Institute of Technology, we took a working tour of a facility at Kodak Park where they had million dollar machines that printed out three dimensional prototypes for their cameras; it was truly eye opening!  We were there to design signage and wall decor for a series of rooms in their plant.  Everyone was knocked out by the idea that you could print a dimensional model.  Now, so many years later the notion of printing in 3D has become commonplace, almost anyone with a thousand dollars can buy a "maker-bot".  But there are still surprises in store..I read this month about a printed house you can live in, and there are experiments in printing a working automobile, and then there are the printed guns that shoot. 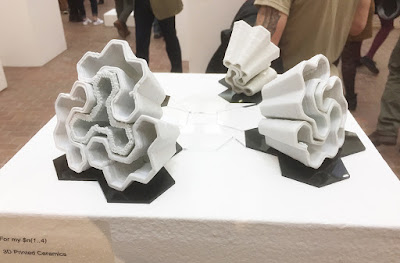 This month we can see 3D printing in the service of art, and Joe Lee with his show "Assembly Language" calls upon a 3D Printer to make ceramic objects that have a mathematical precision.  His show comes as part of annual graduate thesis projects that are now on view in the Bevier Gallery.
If you have never seen printed ceramic objects ( I am not talking about print on the ceramics, rather I am talking about creating the forms layer by layer from the bottom up ) now is the chance to catch up. 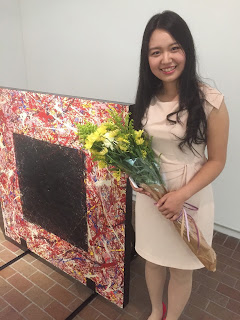 Mirrors are central to the art of Xinhao Yang, and she creates a faceted mirror ring that you can wear, as well as a mirror cage that you can get into and be rolled around along the halls and walkways as a performance piece.  She says that the mirror links the positive and the negative, both reflecting and amplifying what we see and experience in life to create a balance. 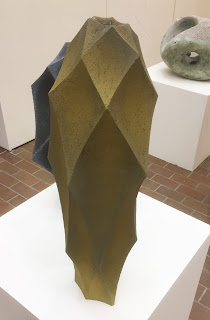 In this same gallery there are colorful larger handmade ceramic pieces by Ryan Florey that also have a mathematical pattern that can be seen in drawings on the walls.  These larger standing ceramic pieces have strong color and strict carved planes which make a distinctive form that can even be used as a bowl to contain water. 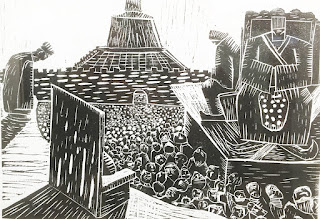 Lingfei Zhao is also one of our graduate students engaged in painting and printmaking.  What makes his work distinctive is his graphic manifestation of his dreams for which he keeps meticulous notebooks.  What he has as his vision at night is transformed into a painting or a print.  He is engaged in visual story-telling which we as his audience get to puzzle out.  It is a personal yet universal language he is striving for and he is becoming a very fine painter in the process. 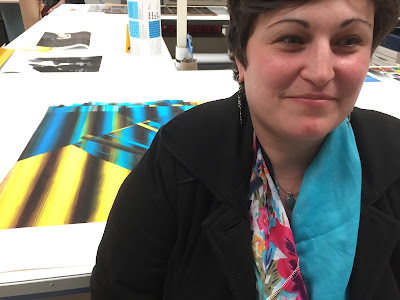 Before we leave R.I.T. for our next stop, I wanted to acknowledge the prints of Rebecca Aloisio.
She is working as an independent study in printmaking and her new prints which you see on the table are just gorgeous.  Keep an eye out for her work, it is quite colorful and very attractive. 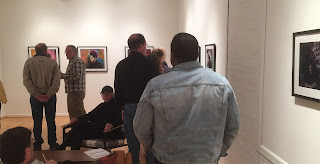 Back in Rochester for an opening at Axom Gallery - we have photographs by Stephen S. Reardon, and this collection - many of which are in color - will remain in your mind for a while.  In one image, a nearly black rectangle reveals a swirl of smoke and then you can gradually make out a hairline, and a silhouette of a face in a photo he calls "Roll Smoke".

Stephen Reardon claims in a wall label that he considers these photos as a form of therapy to get over anxiety he felt approaching strangers and asking to take their picture.  Many people have felt this urge to make a photograph of people they do not know, and maybe it is an invasion of their privacy, so it does take some guts to walk up to someone to ask for this as a courtesy. 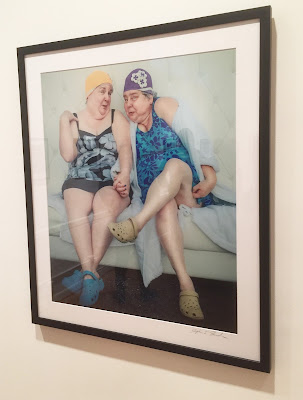 You may have seen some of these images before, and Stephen Reardon has published his work ( in Post Magazine for example ). MK Ultra is one image that comes to mind - that I have seen before.  Some of Reardon's photos are funny, like Adam in his shorts, or the two ladies in their swimsuits in the photo above " Dare To Be Great".

What I would like to see would be the stories that could accompany these photos - to go another step towards documenting the whole transaction of what was first seen by the photographer, and the dialog that ensued in order to make the photograph.  That way, we as an audience could fully immerse ourselves in the process, and learn along with the photographer - how to get over those anxieties.