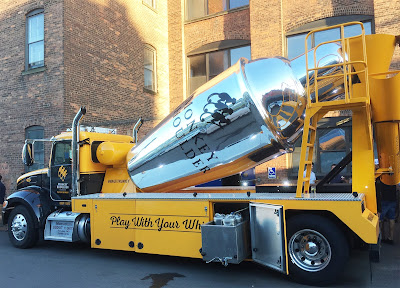 To insure an adequate supply, the world's largest cocktail shaker was parked in the back of Anderson Alley so people could sip their way towards celebration...  A really shiny Kenworth truck filled with good cheer was making house calls, meanwhile, I went up to the fourth floor to see what the friends were up to on a beautiful June night here in Rochester.

I moved up to Rochester from Park Slope in Brooklyn almost 30 years ago to teach in the School of Art at Rochester Institute of Technology.  While I was in New York, I had studied painting at The Cooper Union where one of my teachers back then was Wolf Kahn - so I was surprised to see his portrait among those in the show called: " Between Worlds" by Zanne that was open when I walked by. 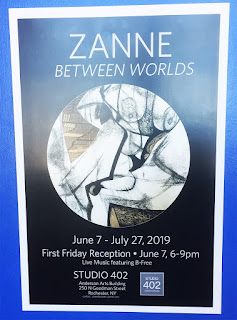 Poster announcing a show
by Zanne 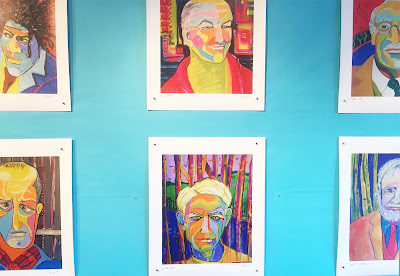 This show "Between Worlds"  has an interesting premise, and you have to wonder how the artist can go from the near abstractions she has on one wall over to the expressive portraits on the next segment of the show.  My friend Richard Harvey said he helped make these large scale reproductions on a new color printer, and I would say that they are quite engaging - a kind of portraiture that seems made for a magazine cover.

Nancy Valle has a big studio here on the fourth floor and she has been into ceramics - I noticed some tiles where she incorporates encaustics - to give the tiles a different color and even a reflective quality. 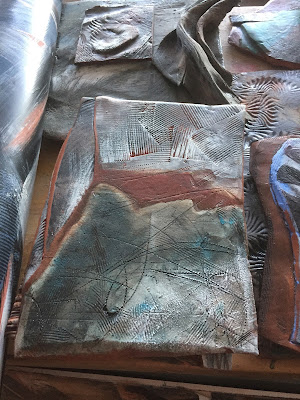 Ceramic Tile in the studio of Nancy Valle

It is interesting that artists in the  building sometimes offer space to other emerging artists for shows and that was the case here, and at Colleen Buzzard's space too.  Colleen has a nice light touch with her  drawing works on Duralar, and the cross-fertilization between drawing and sculpture. 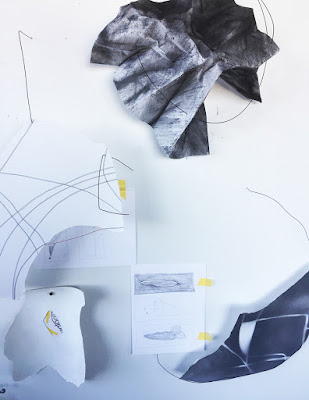 Colleen Buzzard has a light touch

Down the hall I went into see the art of Kathy Farrell, Peter Monacelli, and George Wegman ( the Best Friends).  You can see them here in the funny poster that they made for the show. 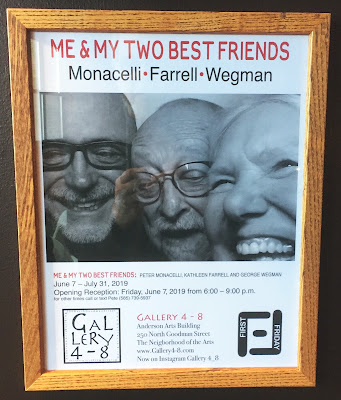 Once inside the show you come fact-to-face with art that you want to get close too - trying to understand the patterns in Kathy Farrell's art - which seems so nonchalant, and quite intimate like reading someone's diary.  The paintings and collage work in this show of three artists seems to dominate the proceedings.  Peter Monacelli's art seems to honor the visions of others - with a collage that is part architectural plan and a kind of comment on the methods of art making - call it inspiration from a diverse  group ( mostly women who should be better known ) .  So here is a work in honor of Kiki Smith, and another work in honor of Gertrude Greene.  If you don't know who these women are - look them up! 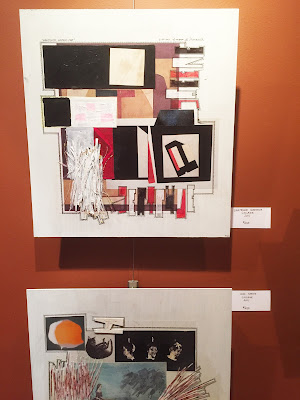 George Wegman has a group of strong little abstracts, and I was attracted to his work called: "Red Alert".  It has a graphic impact that is easy to see and the work  has a strong relationship to Peter Monacelli's approach - you can see that these best friends may have influenced each other! 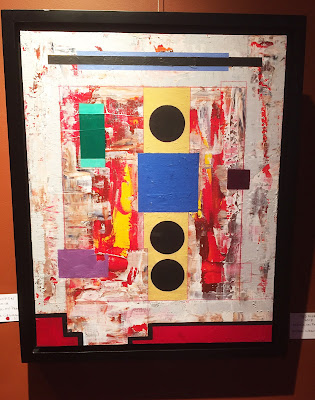 So, Kathy Farrell has often come to my class to speak about her work arranging exhibitions for Monroe Community College where she has guided the Mercer Gallery for many years.  The small framed abstract works she has in this show have a spontaneous and intimate appeal.  They could be   a  visual equivalent of a series of dance moves, or a pattern of migration.  From my point of view they are all about movement.  But you will have to see for yourself. 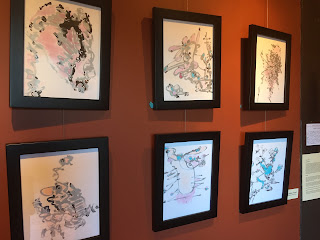 Outdoors,  once I took a look at the shows on a First Friday, going back to my car, I saw the new construction of apartments nearby and stopped to admire the big Albert Paley sculpture now so firmly rooted in the landscape around the Memorial Art Gallery.  Beautiful night here in upstate New York! 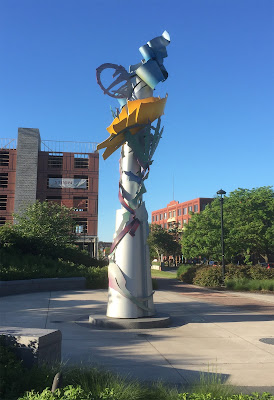 Albert Paley on a summer night