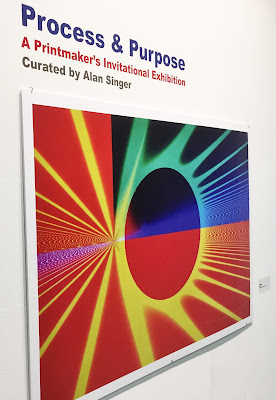 This has been a very rewarding summer season in many ways.  The visual arts in our area undergoes a process of renewal with the success of exhibitions like the one I have curated that has just ended a run here in Rochester at the new RIT City Art Space.  It is a beautiful site for a show, and I was pleased  to be able to present the prints of eight artists and we had many visitors who were new to the  gallery, including a troop of the docents who work at The Memorial Art Gallery. 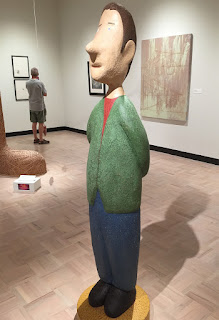 Speaking of The Memorial Art Gallery, I returned to see the 66th Finger Lakes Exhibition more than once and again found many interesting pieces in the show, like works by my colleague Andy Buck from RIT, and a surprising range of paintings, prints and sculpture. 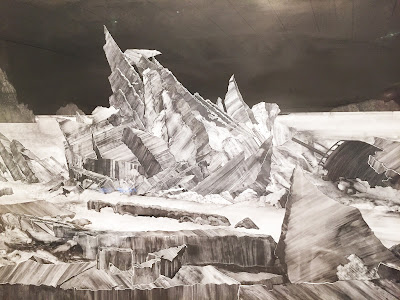 Artists are dealing with contemporary issues, that may not seem so unusual - and many of these issues ( like climate change ) are not going away.  This Finger Lakes Exhibition was one of the most diverse shows I have seen in many years of visiting this museum.  The range of techniques, and the high quality of the art on view is a testament to the professional level of the artists chosen, and the fact that there is no dominating style or "ism" featured. 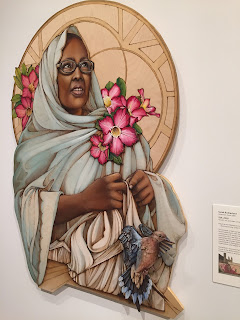 Sarah C. Rutherford's portraits
from her series "Her Voice Carries"

I am also glad to see that there are some new works on view in the galleries including a special entry hall filled with works by the artist Sam Gilliam, that I wrote about in my last post.  There is real value  given to introducing artists that the public should be made more aware of.  That is also part of my job here, and one of the reasons why I write this blog, there just isn't the kind of reporting going on in our major media, especially in print, that can help the public comprehend what is happening in our visual culture.

In the near future I plan to take some time to engage with a project called: "Current Seen".  the Rochester Contemporary Art Center will be promoting this with other venues hosting curated shows of local and national talent, so watch this space!

With every turn of the season, there is unfortunate loss as well, as we pay our respects to Jacque Clements ( 1925-2019 ) who passed away this month after suffering a stroke.  Jacque was a friend and a respected teacher and artist who painted and sculpted for years, yet many people would not know his work. 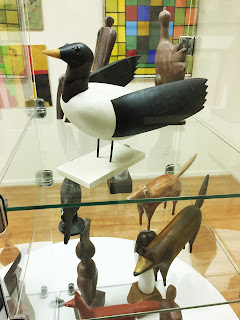 At the Hungerford Building, there was a fine - though small - memorial for Jacque that featured his art - most of which was new to me.  I hope in the future to be able to see more of what he made during his lifetime as a working artist.  We are grateful to Warren Phillips for staging this event, and giving us some insight into this man's pursuit of his dreams. 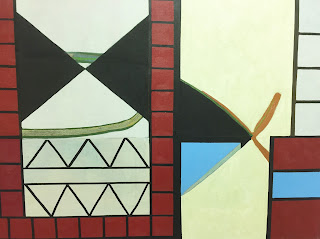 The passing of a friend reminds us of our own mortality, so make the most of what you have got!

In Jacque's case he shied away from publicity, and the urge to promote his own work.  With the amount of competition for the attention of a public, artists really have their work cut out for them.  You have to make all of your efforts count, and I am thinking about this as I begin to prepare for the new season.  I am already planning ( in my mind ) exhibitions for the year 2020!  I am also looking forward to shows that are coming up including the major one I mentioned before called: "Current Seen" which already has its own website.  Another show that just opened at Main Street Arts in Clifton Springs is called: "From The Dirt To The Skies" that features five artists, including Chad Grohman     ( who was a student of mine at R.I.T. ) and Lanna Pejovic who has taught for many years  also at R.I.T. 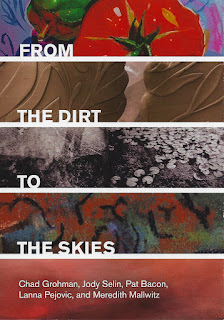