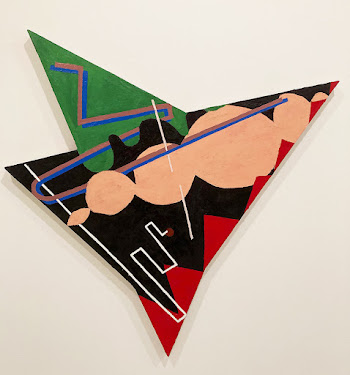 Elizabeth Murray at University of Buffalo Anderson Gallery
Buffalo, New York
thru October 3, 2021
I met her coming off the airplane at the airport in Rochester, New York, and promptly drove Elizabeth Murray over to meet with my students at Rochester Institute of Technology.  The year was 2002.  Just a few weeks earlier she had been close at hand in her studio in lower Manhattan to witness the crashes and catastrophe of 9/11.  I wondered how those days might have affected her and influenced her thinking and her artwork.  We talked about this in the car as we approached R.I.T. 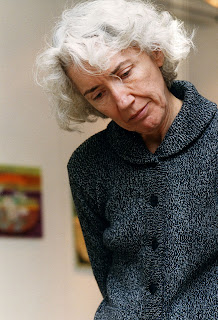 Elizabeth Murray visiting my painting class at R.I.T. in 2002
Now, almost twenty years later, one could get a better picture of how Elizabeth's art had changed when viewing the show " Back in Town" that is on for the rest of this month in Buffalo, N.Y.  The artist has passed on but her artwork survives, and this show mounted at the University of Buffalo Anderson Gallery is powerful and allows one to evaluate her influence on artists since her heyday in the later part of the 20th century. 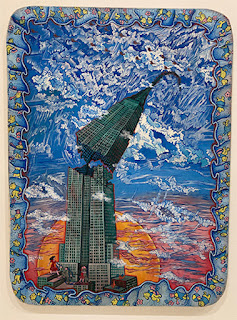 Elizabeth Murray's early work at U of B Anderson Gallery
I thought of our conversation about 9/11 when I was visiting  the Anderson Gallery and caught sight of the toppling of the Empire State Building in her early work on exhibit.  She must have had a premonition of some sort!  In this present show there are several of her earliest works that mix a kind of cartoon style with textures and nervous colors like you see here ( above ).
"Back in Town" harkens back to a period in Elizabeth Murray's career when she was a teacher in Buffalo and was just setting out her subjects and her materials.  She only stayed in Buffalo two short years and then it was on to the Big Apple! 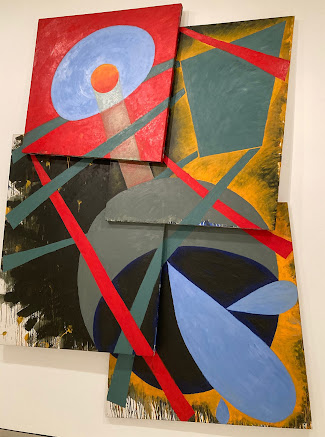 "Flying Bye" oil on canvas by Elizabeth Murray,  1982
I had been following her work since I first found it in the early 1970s at the Paula Cooper Gallery in SoHo in lower Manhattan.  Elizabeth took her interest in abstraction and married that to imagery taken from comic books and symbolism. Ingenuity  in form and color, Elizabeth Murray's art took painting and moved it closer to a sculptural presence. 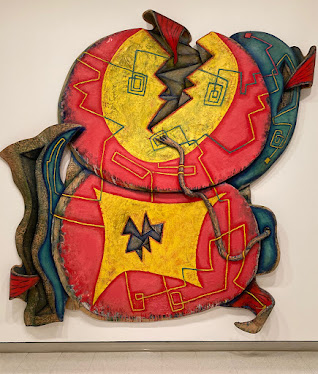 "Sandpaper Fate", oil on canvas, 1992-93
This show is on until October 3rd, 2021 and it covers the two floors of the Anderson Gallery with artwork that runs through a robust period of nearly thirty years, with drawings and prints right up to her last paintings.  If you haven't seen this show - DON"T Miss It!  I thank the curators and the family trust that holds many of these works.  I am inspired by the energy Elizabeth brought to her task, and one can follow along with her development through the inclusion of drawings for this painting above called: "Sandpaper Fate".
This artwork indeed must have gone through many stages.  Just developing the stretchers for her paintings is a challenge for a carpenter because the edges curl around giving this painting a real dimensional form that juts off the wall. 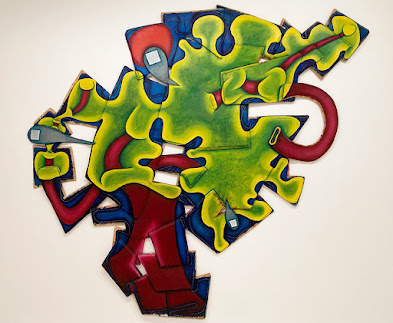 "Riverbank", oil on canvas , 1997 in the collection of The Albright Knox
In Murray's art there is an active sense of humor and movement as maybe a coffee cup spills over, or  a face that looks like crinkled lettuce has a word or two to say.  This is an interesting engagement  that Elizabeth Murray has with her audience, she is always giving you a zetz. 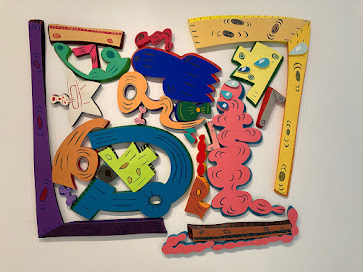 Bill Alley, lithograph in several parts by Elizabeth Murray
Upstairs, at the U of B  Anderson Gallery, there is a survey of Elizabeth's artwork in printmaking.  Here the visitor is greeted with a lithograph that really circles back to the comics - trying to tell a story using form and color linked to shapes that may have a symbolic resonance.  Many of the prints on view here relate rounded shapes that can serve as suggestions for paintings that would arrive later in her life.
When I brought Elizabeth to  speak to students back in 2002, I did not know then that she had health struggles, and I also did not know that she would be given a full scale retrospective at The Museum of Modern Art in 2005, just a couple of years before her death.  At least she got to participate then and I expect that her art will have greater impact on viewers as the years go by...she was a true master, and this show gives us a chance to watch her development - and see how she broke the rules and made paintings her way!
Posted by Alan Singer at 7:09 PM