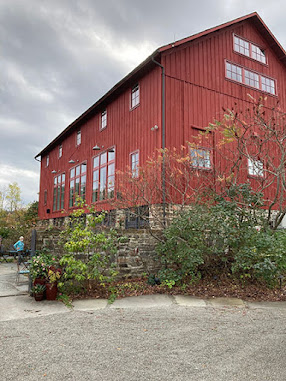 The Treman Center, Enfield, NY
Just driving back from The Treman Center near Ithaca, New York on Sunday where my classmate from Cornell University - Kumi Korf gave a performance called "Hidden Books ll".
This really unusual afternoon saw a gathering of folks from near and far in celebration for the life we share on this planet.  And the fragility of it all....Kumi is a visual artist who has struggled of late with her health and during a recent hospital stay had a vision for a gathering of people - a happening - a living artist book bash, with fashionable modern dancers and a musical score.  We witness a truly magical experience! 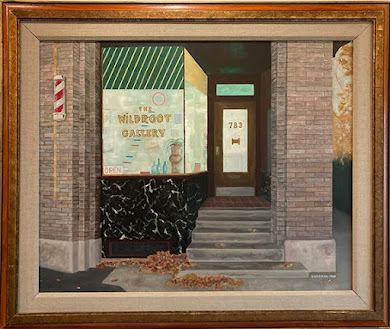 Wildroot Gallery by George Wegman
Right now, much closer to home there is a gallery show that features the Wildroot Group at Warren Phillips Fine & Frame in the Hungerford Building.  Who or what is the Wildroot Group?  I. gather that the Group actually had their own art gallery in the South  Wedge once upon a time in an old  barber shop.  The Group now includes five artists and they are: Nancy Holowka, William Holowka, Peter Monacelli, Robert Whiteside and George Wegman.  This artist cooperative has many diverse talents and they are on display this month. 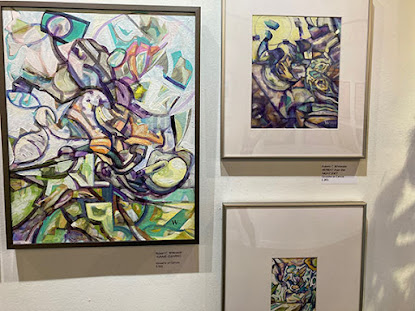 Artwork by Robert C. Whiteside
Early in my teaching career at Rochester Institute of Technology I met with "Bob" Whiteside and "Bill" Holowka when they both worked for an outdoor signage company and they helped me and my students in illustration to develop a layout for a mural that is still in place on the walls of the parking garage under the family court building in downtown Rochester.  I didn't know at the time that they were part of this Wildroot Group and I now wonder how much their artwork has changed since I first met them. 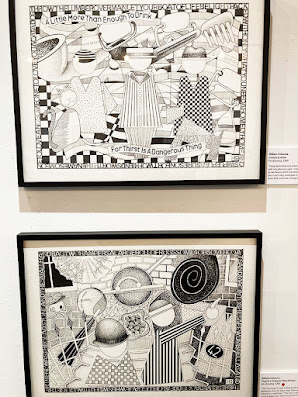 Pen drawings by William Holowka
At Warren Phillips' gallery there are paintings by Robert C. Whiteside which seem to move and swirl with a nod to Cezanne and Abstract Expressionism.  His colleague, William Holowka has made drawings that include texts for each image and seem to have been made with a technical pen being very careful with all the lettering!  Above are two drawings - "Useless Lumber" and  "Looking for Stanley" with a certain urge to find a pattern that suits each character. 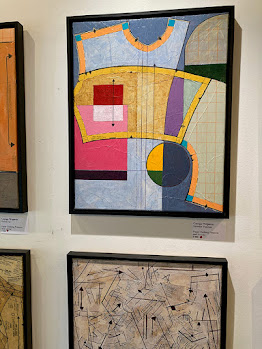 Collage and painting by George Wegman
When you walk into this gallery you come face to face with a selection of recent collage/paintings by George Wegman and it seems that much of his collage work incorporates dress patterns made of overlaps of printed paper glued onto the surface of the canvas and then painted.  Judging from the number of red dots that indicate the work has sold, George has touched people with his compositions and maybe this represents a shift for him and we can look forward to more of his painted collages!
Nancy Holowka was working at  The Memorial Art  Gallery and for many years assisted the Director, Grant Holcomb.  Now it seems she is creating a series of photos that have their roots in colorful abstractions like her print she calls: "Waterloo Blue".  Her images  bring to mind another local photographer - Pat Wilder - who passed away last year. 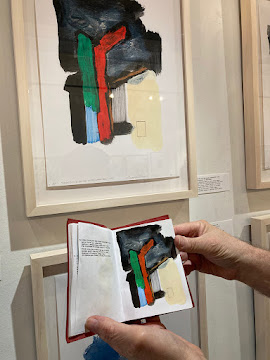 Peter Monacelli has hand made book images and archival prints
Peter Monacelli has a whole series of prints on view that are enlargements from the pages of smaller colorful artwork he keeps in a series of notebooks.  The originals - all 172 of them - are mostly abstract and are reflections on Asian poetry - The Mountain Poetry of StoneHouse which was translated from the writings made in the 13th century.  Peter  says that his originals are visual translations from the "Mountain Poems" and next to each print is a bit of the literature so you can see the painting Peter made and read the poem.  These are works that have an immediate and intimate setting and you can see the response that Peter has had with each poem giving each one an engaging invention, colorful and thoughtful at the same time. 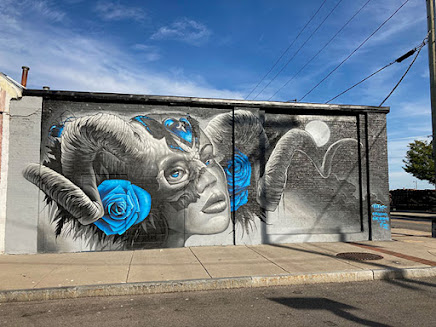 Wall / Therapy with Maxx 242
On the way home I pull over to take a photo of a new wall mural that has been painted in the industrial zone just outside of the railroad yard.  Wall/Therapy is celebrating their 10th anniversary as an advocacy group for public art in our city.  I wish them well!  I did see that this wall had been freshly painted and I wondered about who Maxx 242 actually is?  The image is a bit of a muchness - the lady has horns and she has a pair of blue roses, and a butterfly heart....
Posted by Alan Singer at 6:34 PM