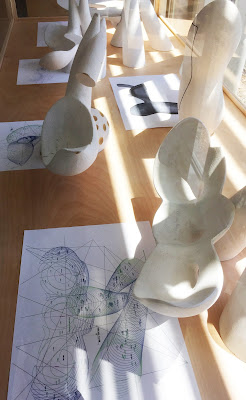 Widely recognized as the father of the Art Furniture Movement, Wendell Castle is being celebrated with a late summer exhibition that has just been mounted in the University Gallery within the Vignelli Design Center on the campus of Rochester Institute of Technology.  This show is called "Wendell Castle Imagined", and its focus is on working drawings and models made in support of some of his signature pieces from recent years as well as a nod back to the 1960's and 1970's. 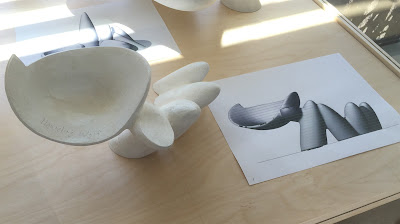 Wendell's 'Wolf'
at the University Gallery

I became aware of Wendell Castle's work early on because it bridged a gap between the Fine Arts, and Craft traditions, and boldly his works were making their way into museum collections and galleries.  Wendell's forms became part of my research when I was making my first sculptural "chair" as a student in a class at The Cooper Union.  I saw Wendell Castle's works in galleries in New York City, and later when I came to teach at R.I.T. he was one of the first people I was introduced to, and I am sure that he has made a lasting impression on his students in classes at R.I.T. where he was enlisted to teach from the early 1960's onward.  Back in the 1960's and 1970's the art furniture movement found its footing and patrons and we still feel the impact of that today, especially with this presentation. 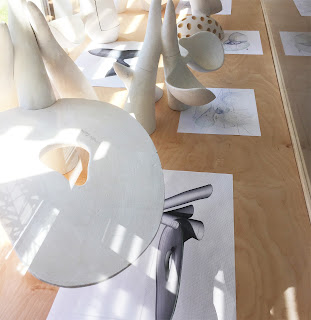 There is no doubt in my mind that these working drawings in the University gallery represent the work of a master.  The imagination and intense devotion to form is on view here in a very meaningful way.  You get to see how this artist thinks with pencil to paper.  What I know of Wendell's early works - are primarily forms of laminated wood with fluid shapes that contrast sharply with the rectilinear expectations that we have for wood work of the recent past ( think Bauhaus modernism ).  The art of Wendell Castle has had a cumulative effect, maybe as important as Frank Lloyd Wright was to architecture, or Brancusi in sculpture.  Wendell's work must have influenced other artists along the way like Tony Cragg and Martin Puryear, and these two artists in turn have contributed greatly to our cultural thinking. 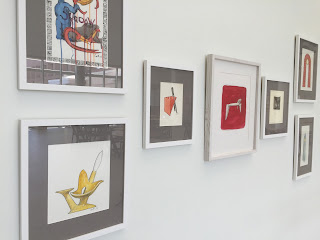 Wendell Castle drawings in his new show
at R.I.T.

Seeing these drawings gives you insight to the working process, and how the forms are developed.  Many of the forms have an organic look, and needless to say they have a sensual aspect and reveal interesting silhouettes, certainly not what you would expect.  I really enjoyed seeing all the models and next to many of them are wire frame drawings that look like they are plotted by a computer. 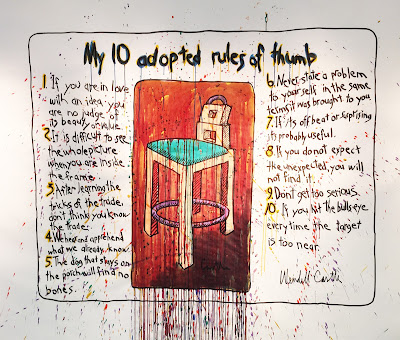 On a back wall in the gallery there is a big poster: Wendell Castle's "My 10 adopted rules of thumb".  This is great for R.I.T. students to read and understand ( If you hit the bullseye every time, the target is too near ).  These insights may have been passed on from generations of craft workers and they will still be relevant today in the arts.  In this show you will find that Wendell's pencil drawings are mostly modest in size but not in ambition, and I hope that this collection of working models and drawings finds a home where they can be seen by a wide audience.