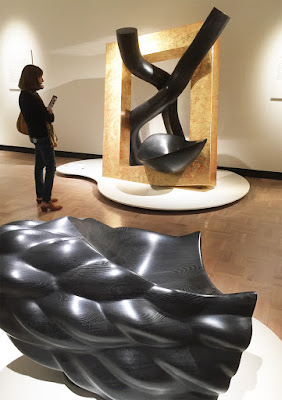 The Memorial Art Gallery hosts "Wendell Castle Remastered" in the voluminous main gallery starting in October and running through the rest of 2017.  There are many of Wendell Castle's recent works, but the theme of remastering calls upon techniques used to bring these sculptural works into existence - and they include robots and digital modeling tools that weren't part of the original process going way back to the beginning of his career. 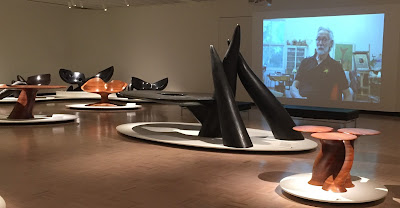 The graphic impact of this current show is intensified through the choice of using dark stained ash for some forms, and I imagine that designing the lighting for this show was very difficult - you want to put the work in a spotlight, but the results of that inclination include the creation of very strong highlights which can cancel out forms.  I imagine an ideal exhibition that would place these artworks in a balanced natural light so the viewer could more easily appreciate the forms and values. 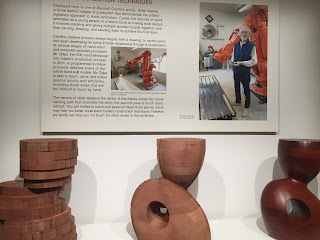 The procedure to make many of the works on exhibit is explained when you enter the show.  A trio of models  ( "Wide Awake" ) suggests the stages, first selecting slabs of wood; and laminating them in stacks, a rough cut to refine the forms, and then the hand finish with a stain or other surface treatment.  This current show is a fine addition to Wendell's exhibitions which I have been following since the 1970's in New York City.  Also, a show that was held recently in our area at the University Gallery at R.I.T. for Wendell's models and drawings helped fill in other parts of his process - if you had the chance to catch that exhibit. 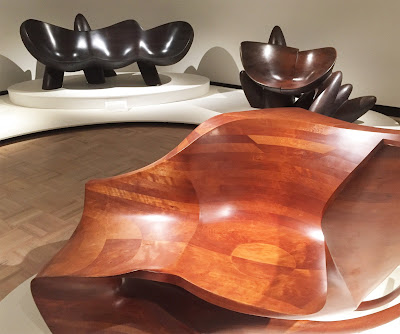 Integrating digital technology to create these large sculptural pieces has augmented Wendell Castle's reach, and added more complexity to the lengthy building process.  This same sort of industrial approach has been used by other sculptors including Frank Stella and Tony Cragg  and many others, and the expertise to get this done, to train the robot "Mr. Chips" involves a deep understanding of engineering principles, hopefully not getting in the way of creativity along the line. 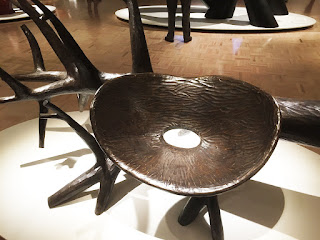 "Fallen and Risen" a bronze by Wendell Castle

Sometimes, I wonder whether the works of art in this show get constrained in the process by the pieces having to be used as a lamp, a table, or a chair.  I know this is an old argument, and the question is heightened here, the "What if?......  I know I was faced with this decision when I was an art student in my first year of Cooper Union when my instructor, Arthur Corwin, set up a proposition to make a form that was sculptural but that you could sit on or in it.  So, is a work of art something that you just look at and contemplate, or is it something that can be functional?  The argument may be moot here. 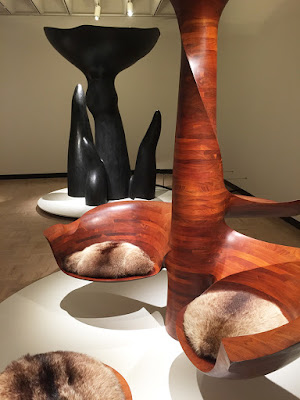 With all kinds of 3D printing now going on, it won't be long before we start seeing more inventive artwork like the kinds of forms we see in this "Remastered".  Knowing about the possibilities available through new technologies is very exciting, but there is still a learning curve, and also there is the question of the cost of all these new tools.  No doubt that we are at a flexion point, and this exhibition helps conjure up questions while introducing us to the state of the art.