Left to Right - Frank Blair introduces  Arthur Singer, 1961.
Photo by Lisl Steiner on the set of The Today Show.

My father, Arthur Singer, was invited to be a guest on The Today Show, and that was back in 1961, after his epic book Birds of the World was published in New York City.  In our photo above, he is sitting with the host of the show - Frank Blair, and they are having a conversation about the bird paintings my father made that are on the back wall of the set.  My dad, not only brought along his artwork, but also some stuffed birds - study "skins" from The American Museum of Natural History.  He would use these skins as a tool to give him vital research information when he was ready to draw out each page of his many books.

There are many challenges being an artist in our society.  First you have to have an aptitude for it.

O.K., as our society changes in the visual arts there are always some constants.  Artists want to reach an audience, and how do they do that?  If you want some level of financial security, you are going to try to sell the things you create, whether it is a book or a painting.  The tangible items you may make in the quiet of your studio space hopefully will reach out and touch someone.  Maybe a collector will like something you have made, and will make an offer to buy it from you.

How do people find out about what you have been up to?  That is the place where marketing takes full effect.  If you are an artist - you will want to show your artwork to the public and get feedback, and then keep on your creative path and not get bent out of shape if you are getting criticism  ( it comes with the territory).  All artists face this, so you develop a plan.  From my own experience I have watched this happen in my family.  My father, Arthur Singer ( above ) had the good fortune to have his art published starting at an early age  ( he was a junior in high school ).  With some of his major projects he chose to speak to the media to tell his story, and it is an engaging one. 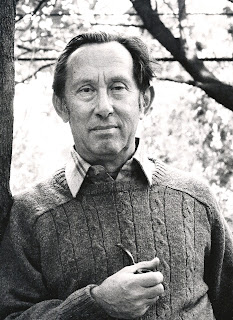 This month, we are presenting our show: Arthur Singer, The Wildlife Art of an American Master, in the University Gallery at Rochester Institute of Technology.  This is the first opportunity we have had to show examples of every aspect of my father's artwork in one place - almost 100 individual artworks on view including many illustrations for books, and many paintings and drawings.  Not all of my father's artwork had to do with birds and animals.  Some of his best things are the watercolor portraits he made during World War ll while he was in the "Ghost Army". 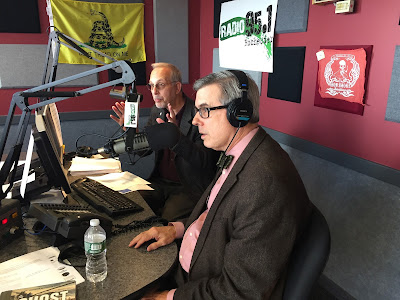 Author Rick Beyer in the foreground
and the writer of this blog in the background
at WHAM, Rochester, NewYork

The story of the "Ghost Army" is co-authored by Rick Beyer, and I invited him to come to Rochester to speak, to introduce his documentary film, and to answer questions from the audience at our exhibition site in the University Gallery.  His documentary tells the story, not only of what my father did during the war, but what kinds of deception the "Ghost Army" engineered during World War ll.
Rick Beyer goes into detail about the fact that the artists in the Ghost Army perfected a certain kind of camouflage, and they successfully deterred the enemy along the front lines of battle.  My father's art skills saved his life, and in our show we have some wonderful works by him including drawings made during the landing at Normandy.  It is a wonder he had the inner fortitude and be calm enough to draw what he saw right in front of him. 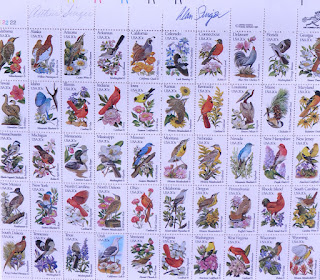 U.S. Postage stamps from 1982
honoring the Birds and Flowers of the fifty states
by Arthur Singer and son, Alan Singer

I had the good fortune also to work closely with my father on a number of  projects including our series of postage stamps honoring the Birds and Flowers of the fifty states.  We worked on book projects together, and our styles of artwork meshed well, so they worked for the reader.  I learned a lot through this period and I can use this knowledge when I teach my students at R.I.T.

Our exhibition is on in Rochester thru October 28, 2017, so make it a point to come over to see it before it closes.  Hope to see you there! 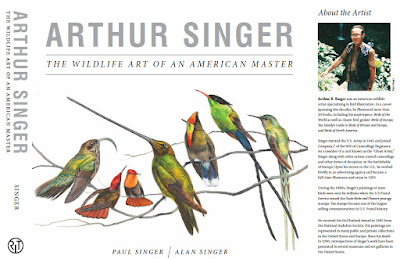 Our new book on the career of Arthur Singer
is available thru RIT Press
https://www.rit.edu/press/