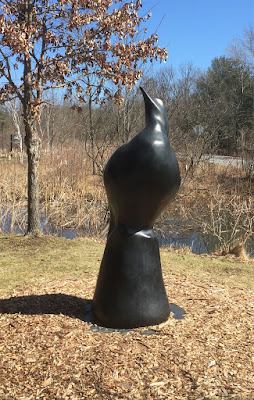 Todd McGrain
"Passenger Pigeon",  bronze, 2007
outside of
The Laboratory of Ornithology,
Ithaca, NY

On a brilliant blue sky day - the first day of spring, we are in Ithaca to take down a show of my father's paintings and illustrations at The Cornell University Laboratory of Ornithology in Sapsucker Woods.  Out in front of the LAB is a sculpture by Todd McGrain that is one part of his "Lost Bird Project".  Here he portrays a version of the last Passenger Pigeon in cast bronze that is much larger than life.  This once abundant bird flew in flocks of millions of birds but was reduced to nothing due to voracious hunting in the 19th Century. 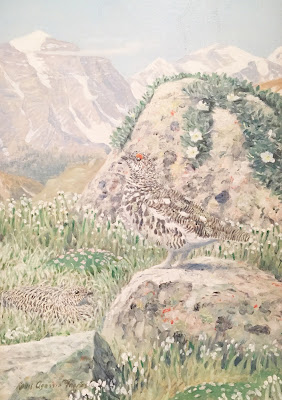 After the demise of the Passenger Pigeon, artists like Louis Agassiz Fuertes ( 1874-1927 ) made it his mission to portray birds of many kinds in oil and watercolor,  mostly on commission from organizations like the National Geographic Magazine that featured his artwork.  Fuentes once taught at Cornell University and is considered to be one of the greatest painters of birds,so the LAB has a selection of his paintings always on view in the boardroom/exhibition space. 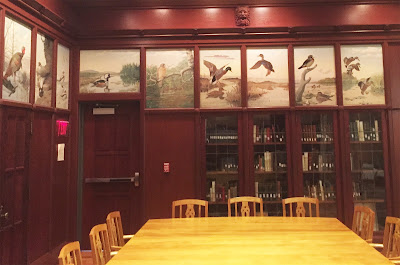 Inside at The Laboratory of Ornithology
Cornell University, Ithaca, New York
Paintings by Louis Agassiz Fuertes

These first days of spring not only brought out some flowers, but the warming trend has melted a lot of snow on the ground which now runs in cascades down the many waterfalls and streams that lead to Lake Cayuga.  Ithaca Falls was thundering when I drove up to see the effects. 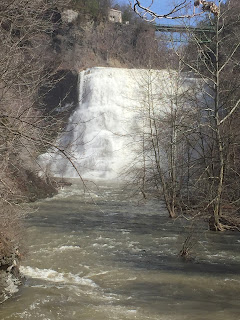 Back at Rochester Institute of Technology where I teach in the School of Art, I had the opportunity to watch as graduating students mount the first of many shows of their artwork.  We have a very diverse student body and the grad students are putting together their Thesis show.  I found one of my students from the Business Practices class working on his sculpture which reminds me of a jungle jim. 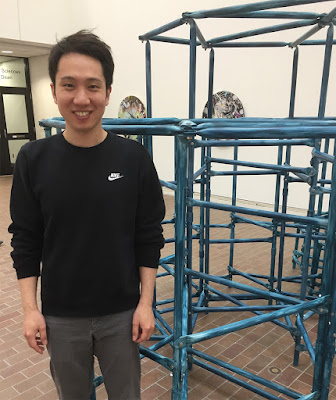 Just behind his installation, Sarah Kinard put her round paintings up on the wall of the gallery.  Her art always seems to be in motion, and the round paintings produce that effect effortlessly.  Wishing these new artists all the success in the world, now it is time to write the thesis! 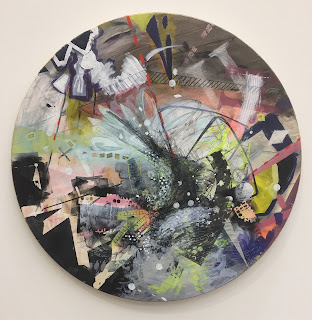 As the new season gets underway, there will be a lot to see, and I am looking forward to the warmer weather so I can get out and look around.  Take a look at these little beauties for example! 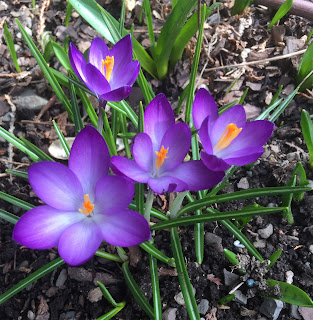