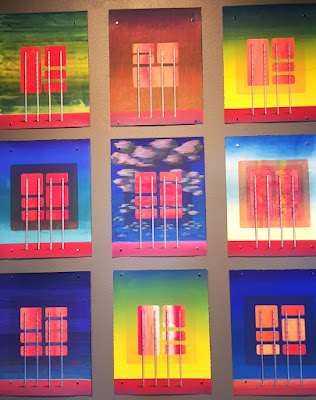 Three shows constitute a kind of sign wave with each exhibition powering up and then simmering down.  One show was closing and two exhibitions were opening.  This is just another reason why our neighborhood has something unique to engage avid art addicts ( like myself ) as well as offer something to those who are "just looking". 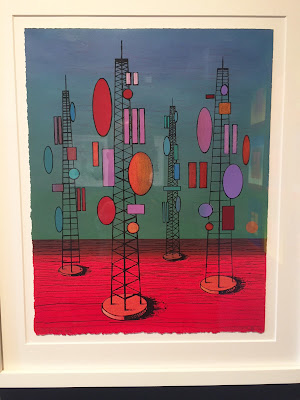 "Now This" by Nick Ruth had a fine selection of recent art by this artist who has a long association with Hobart William & Smith College at Geneva, New York.  Nick Ruth is an artist whose work I have followed ( I have one of his early pattern paintings ) and his show "Now This" had prints and mixed media works that share a common thread: Communications.  The show was held at Makers Gallery & Studio, 34 Elton Street, in Rochester.  If you haven't been there it is worth the walk up three flights of stairs to check out the latest and greatest. 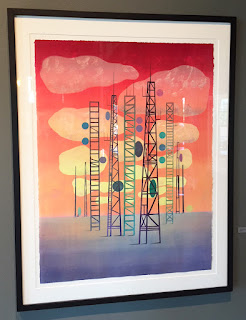 Ruth's art in this show ( now closed ) is of a modest size, and the imagery has a sense of humor and a touch of the surreal.  These are signs with no discernible language - maybe you are supposed to project what you think the signs should say.. or maybe the imagery is derived from all the cell towers we can see in a given landscape and the power they project of conversations flowing and an endless river of data.... 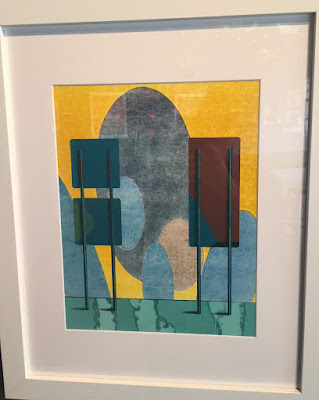 Something about Nick Ruth's art reminds me of the west-coast painter Wayne Thiebaud - with his lines of cup cakes and pies.  Each one of Nick Ruth's signs has a similar form to the other signs but the details are different.  Many of the signs are viewed from the back, and that means we get to see the structure - and that is what creates meaning as opposed to seeing the information - the language or instruction that is left blank.  A meditation - Life is an open book - but this book has no text! 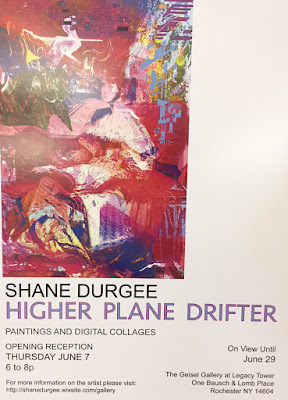 Across town in the Geisel Gallery, Shane Durgee has mounted his artwork in the long hallway of the former Bausch & Lomb headquarters.  Now, through the end of June you can find that Shane's artwork is very engaging and speaks to a younger generation through his frenetic imagery. Shane is a recent graduate of Rochester Institute of Technology where he is presently employed to manage shows in the Bevier Gallery and much more.  He can teach others and this then leaves time for him to be involved in his own art making and it seems that he is quite active in paintings and prints. 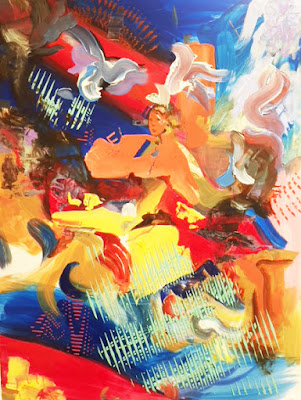 When I write that his work speaks to a younger generation - I mean that his use of cartoonish characters - not entirely unlike anime - with a bit of the grotesque thrown in to provide spice, would be consistent with the experience of growing up being exposed to video games, album covers, and all the devices that divide one's attention. 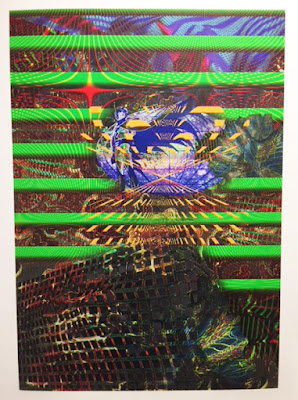 I recognize some of the prints in this new show because they were made in a class that I gave at R.I.T. in digital printmaking.  The fact is Shane picked up what I was teaching really quickly and made some terrific images, worth being part of the show here. 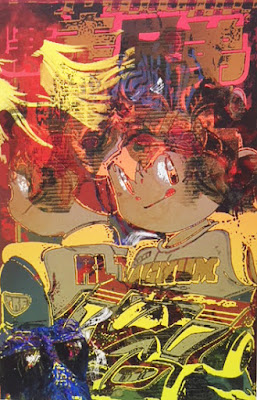 So there is a burst of imagery in each painting or print that highlights the way our attention shifts and then moves on.  In some ways, Shane's artwork in this exhibition could be a commentary on the artwork I found in another exhibition that opened up this week... 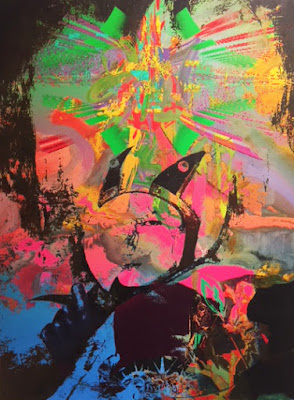 I attended another opening this weekend at The Axom Gallery for the artist Carey Corea with his show " Beyond the Surface" .  Many of the paintings on view include encaustic - which is an ancient wax medium combined with pigment and the colors are rich and tactile.  We are lucky to have a local vendor - the creator of Encaustikos - here at Rochester Art Supply!  ..and he was very happy with the way his colors looked in the paintings of Carey Corea. 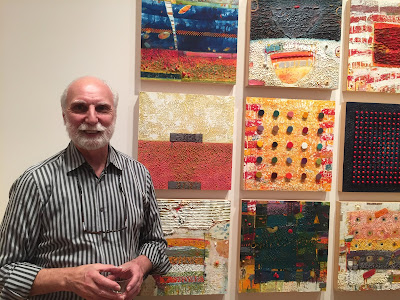 The selection of artworks make a case for late abstract expressionism, and there are some characteristics worth noting.  I asked the artist if he worked on many of these paintings at once - and he answered that he never has more than one work in progress at a time for fear of losing his focus.  I thought that since these paintings took a lot of time ( the paints have to be heated up so they reach a fluid state ) that there would be room for having many paintings in the works. 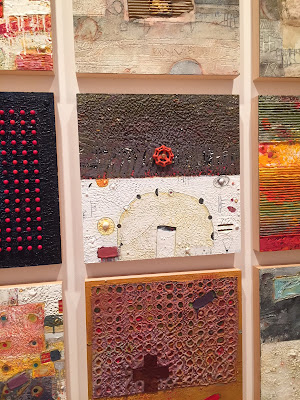 The little selection of photographs are in keeping with the structures found in his paintings.  There can be a kind of game being played - especially in the mass of similar sized works that make up a grid at one end of the large exhibition space.  In this grid of 16 inch square paintings there is a vocabulary established of textures and colors.  Carey Corea mentioned that the most recent of these compositions has an orange handle inserted into the artwork called: "Turn". 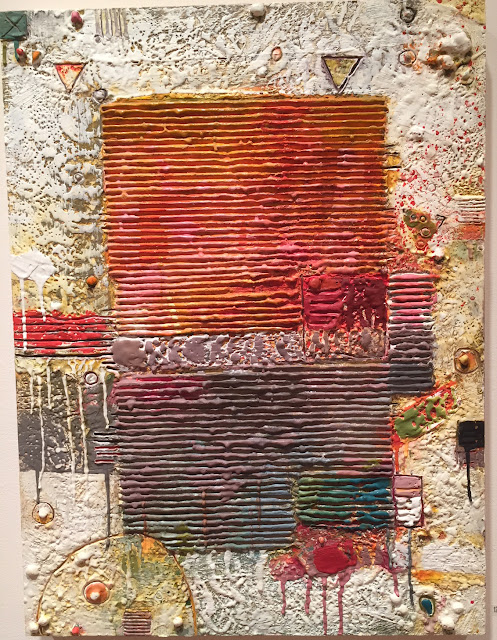 Recently, I re-read essays by Clement Greenberg written in the 1950s at the height of abstract expressionism.  Greenberg comments that the painters he admired used their compositions to highlight the strengths of the two dimensional surface they worked on - a kind of critique of the art that came before that tries to mimic nature with portraits and realism and the like.  Carey Corea doesn't  mimic nature, but he sometimes applies objects directly into his compositions without any explanation and they become enigmatic. 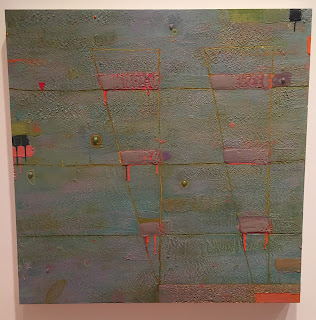 The recent work of Carey Corea
at
Axom Gallery

The subtitle of the showing of Carey Corea's art  declares it all: "The Spiritual Beauty of Abstraction".  Among the most recent works are three compositions at the opposite end of the room from the grid.  Here the effects are much more subtle and resonate with late Monet and even Robert Motherwell.  An engagement with visual art is something I share with others, and one can find inspiration here, you just have to know where to look. 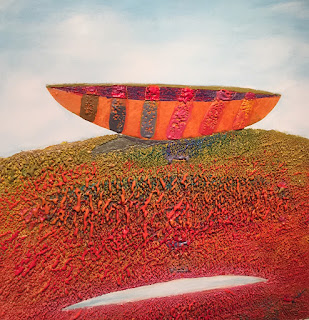