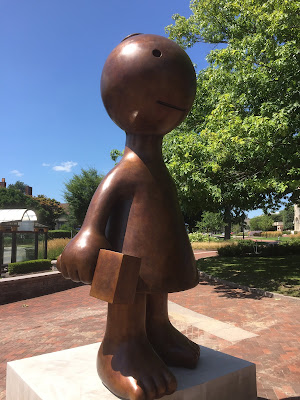 Winding my way to the studio in the Hungerford Building the other day I noticed workers and trucks at the installation on the corner of University Avenue.  I went over to see what they have been doing and I was surprised to see that the sculpture from Tom Otterness has been switched out.  It came as a surprise because I don't remember reading anything about it in the papers.  In case you haven't been by there - this set of sculptures has become a popular destination  - and now there is a new version in metal of one of his pieces,  recently installed.  I wonder why, and how it was changed, not that anything was lost - it is just different!  Now we have one in metal and one in stone, along with many of the little versions sprinkled around the grounds of the Memorial Art Gallery. 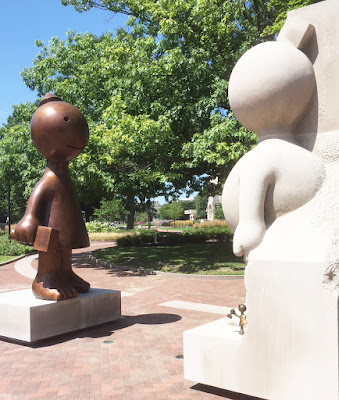 A little further on my way, on College Avenue, Gallery r is closed for the summer, and will be opening in a new spot during the fall in a mid-town location.  I am sure we will have some interesting news about that to share with you soon.  The College Avenue location has served the students and faculty of R.I.T. well,  and now we will see what will happen in their new exhibition space.

If you plan to visit galleries this summer, take in a new show that is by photographer John Retallack being held at the Joy Gallery, 498 Main Street West, in Rochester.  John mentioned to me that his show called: STORY will remain at the gallery during September.  John Retallack has been involved with photography and printing for years, and he was also teaching at Rochester Institute of Technology which was where we first met.  The interesting thing about these new photo prints on view is that often John has hand written a story to go along with the image. 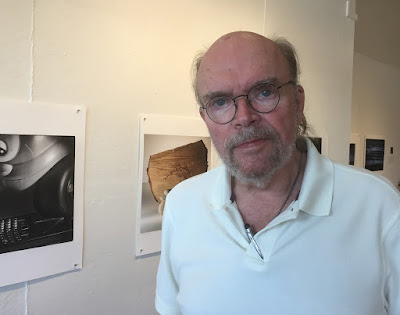 Some of the photos in the present show go back in time; John is revisiting places he has been and telling the stories of how the photos were made.  Not all of the prints are combined with his hand writing however.  Some of the photos  are quite unique ( especially his toy truck images ) and other photos seem to come from a time when he was mainly making portraits.  In fact he published a book with Anne C. Coon of faculty portraits  at R.I.T.  ( there is an image of Scott McCarney in the present show as an example ). 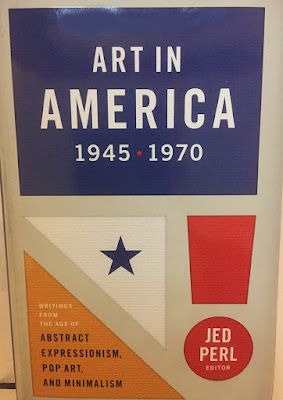 Summer is a time when I can catch up on my reading, and I can recommend a compendium that has been published from Jed Perl.  He collects essays from writers on American Art - going back to 1945 and ending up around 1970.  In collecting this 800 plus page  book Jed Perl writes introductions for each selection, and tells us why he made the choice of these essays - why he feels they are necessary for a better understanding of the art we see in galleries and museums.  I think this would be a good selection for anyone who is curious about what was being said about  some of the well known artists of the time including writings by some of the artists themselves including Isamu Noguchi,  Barnett Newman, and Willem de Kooning.  It may surprise you how eloquent some of the artists are in their communications!