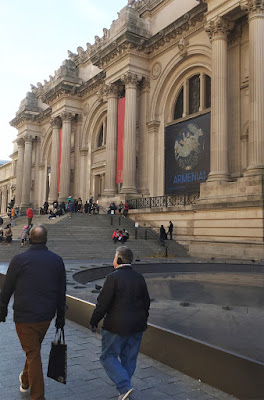 
Walking over to The Metropolitan Museum of Art on the weekend after viewing Hilma af Klint at The Guggenheim, I was not prepared for the crowds - literally waves of humanity packing into the entrance to the museums.  At The MET they have a new mechanical ticket booth where they scan your credit card, and the line was backed up.  Once upstairs, I wanted to go and commune with Eugene Delacroix and along the hallways leading to the show I stopped to look at a new print by Kara Walker - which was kind of monumental in it's own right.  Kara Walker you will know from her silhouettes in black that depict situations for African-Americans based on the deeply disturbing racism that is part of our national heritage. 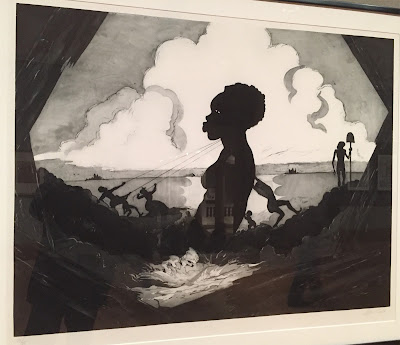 Kara Walker and "Patronage"
at The MET

Kara Walker's trio of images recall the idea of "Patronage" and the central panel shows people erecting a large statue of an African-American woman in some classical landscape of the imagination.  This acts as something of a mental wedge against all the mythology that tends to be the highlight of other prints and drawings found in this hall, and Kara Walker makes her point.  If you like this powerful print,  I saw a copy of it in the MET store which can be purchased for 24K. 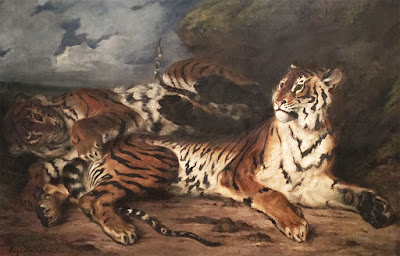 This is also a rare moment to see the show of paintings and drawings collected now by Eugene Delacroix ( 1798 - 1863 ) at The MET.  It is not often that his artwork could be seen in such a massive show which on the day I visited was packed with onlookers. 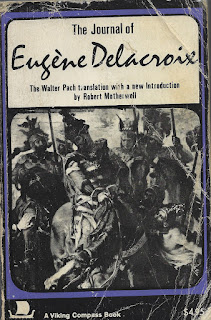 When I was a student, I read The Journal of Eugene Delacroix and I have studied his paintings and I am always interested in how his art was generated - and who he was - given the history and the important role of painting in 19th century France.  Delacroix is a flex point in painting even though the standards of art are still wrapped up in history and allegory.  Delacroix's art begins to look towards other regions so he travels abroad to find inspiration. 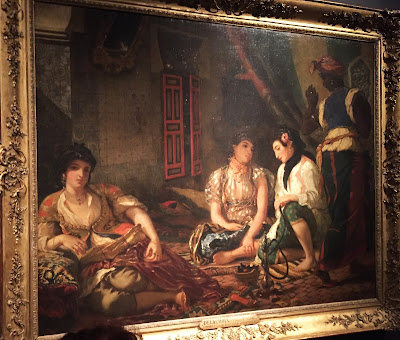 I have admired his painting "Women of Algiers" and that carries through today.  There is a timeless quality in his handling of light and the care taken with each character; the details of the room, the gestures and so on.  I think that this painting represents a period of contemplation - maybe about these women's lives - and it attracts my attention.  When I was a younger artist I spent many hours painting portraits, so I am aware of the power of paint and how it can structure emotion in a work of art. 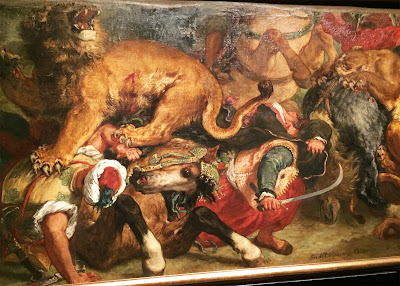 Delacroix also conveys the nature of power and conflict in his animal portraits, and the image above gives a portion of the tumult he can convey in a composition - the abstract forms seen in a study for this painting could step right out of expressionism which would arrive many years later.  There are not too many people who want to portray the struggles that Delacroix imagined, and I think they represent something of his own psychology in these attempts at dealing with violence. 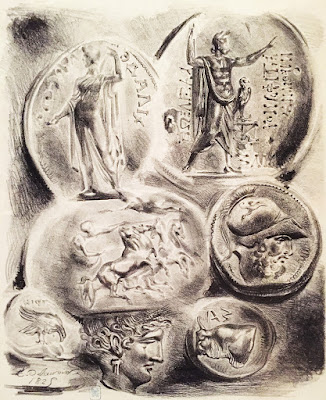 As with any large retrospective there are always going to be some surprises.  The present exhibitions show selections from a collection of drawings, and I found this drawing of coins to be kind of unusual.  This is Delacroix looking back to ancient history through symbols and scenes that evoke a certain respect for institutions.  I think  Delacroix was torn in his respect for governments while still maintaining his own freedom and integrity. 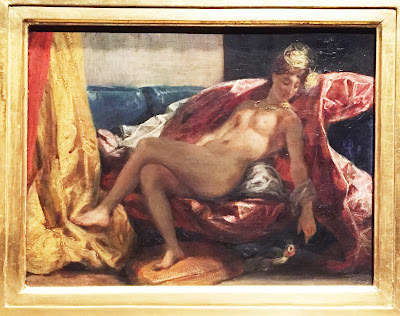 Delacroix and his "Lady With a Parrot"
at The MET

Going back to The Journal of Eugene Delacroix he takes a moment to quote a friend saying "what characterizes a master is his recognizing of the essential thing in a picture, the thing that must absolutely be reached.  Mere talent thinks only of details:  See Ingres, and David.....

Delacroix may not have been the supreme master, but he was well aware of his ability and his work is a flex point moving towards a modern era of painterly expression. 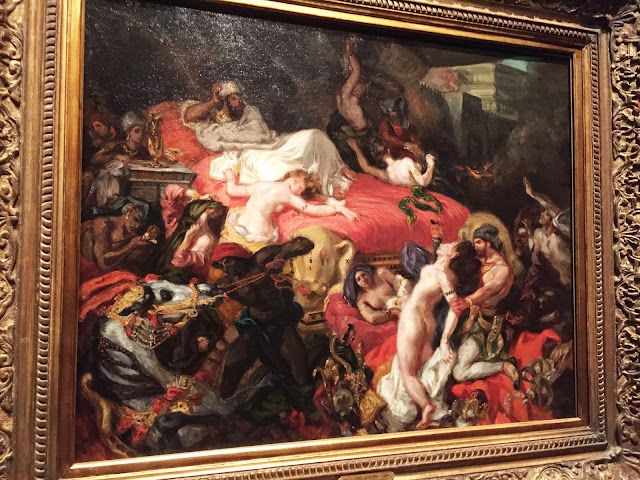 Study: Death of Sardanapalus by Eugene Delacroix
at The MET