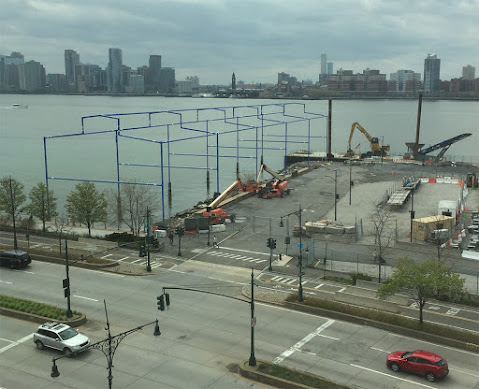 Across the road on the upper left
Artist David Hammons
Installation of a ghostly sort...of sculpture
Lucky for us, we can spend some time out in the world, going to see some art now at my local museum.  It was just a couple of weeks ago that we were in New York City, and we walked into the new Whitney Museum of Art down along the west side of Manhattan.  Looking out from a top floor window of the new Whitney, I see a sculpture that is actually mounted out in the Hudson River, where old piers once stood.  The installation looks complete, but the work is like a contour drawing of one of the old warehouse buildings that once lined this section of the waterfront.  The artist in charge is David Hammons, and I wondered about the kinds of strings that had to be pulled in order for the city to allow this kind of "building" where heavy freighters once tied up along the docks.

David Hammons art is very evocative, even ghostly.  This kind of site specific work reminds me so much of what Robert Smithson would write about in his essays that would recall "monuments" of an era past.  I often walked down this stretch of road when I was a teenager, to photograph and sketch, never stopping to think what the future would hold for this place.  Now, when we come back into Manhattan I almost can't recognize the city where I was born! 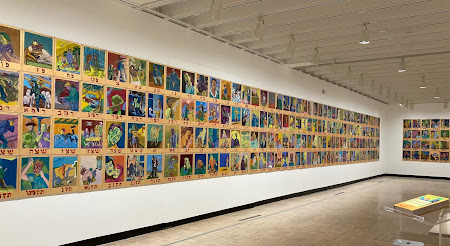 Archie Rand's "613" at The Memorial Art Gallery
Closer to where we now live in upstate New York, the cases of Covid have been dropping mercifully and people can feel more apt to want to be outside and enjoy the warmer weather.  Having had a vaccination may lessen the anxiety a bit but we still don't go out to a crowded restaurant and rarely to a show.  I do wonder how a gallery can stay in business under these circumstances.  When I visited The Memorial Art Gallery recently, I did find a few people out to see the new show of Archie Rand's paintings he calls "The 613". 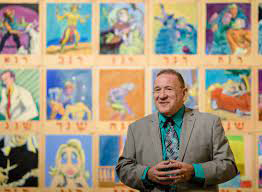 Archie Rand and his "613" paintings
When I go out to see contemporary artist's work, I often recognize their style from having seen a show of their's before, and that is certainly the case with Archie Rand who is a painter I have followed over my years in New York City, and I also remember that Rand was a teacher at Columbia University when we lived downstate. 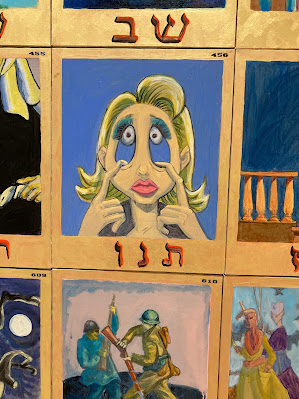 "613"  is a series of paintings that illustrate more than the ten commandments
The publicity and essays about Archie Rand always mention that he is thought of as something of a renegade by not following trends in the artworld.  "The 613" follows in that regard in that the paintings
illustrate teachings found in the Torah - a holy book which I once held open during my Bar Mitzvah!  Archie Rand's paintings are all based on the "dos" and don'ts of the Jewish faith.  When looking at this show I right away thought about my own relationship with religion and the standards that I stood for.  Beyond my 13th birthday I neglected religious teachings and sought out other avenues that I found more to my taste.  My teachers in synagogue tried to have me speak in Hebrew, but I didn't have an ear for the language and quickly forgot the letters of that alphabet! 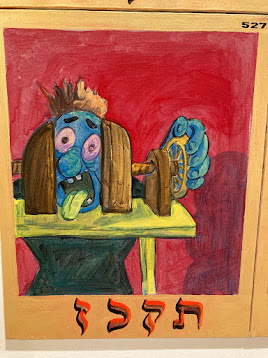 Archie Rand: Between the Comic and the Tragic
Now, when I am faced with the Hebrew in Archie Rand's paintings at the MAG, I will admit it is a struggle!  Certainly the paintings are more than the language and they present an image that is often a kind of comic or cartoon.  I think Archie Rand tries not to be too pedantic in his interpretations of what the commandments may mean.  His style sums up in an image what might cross your mind when you can interpret the painting at all in the first place.  Some of his images stand out- or else I remember them because they are a scream - a man puts his head in a vice, or a woman has her eyes sunk deep in her head and you can see out the other side!  The paintings ( hundreds of them ) are lined up along the walls and you can take your pick of the ones that really register.... 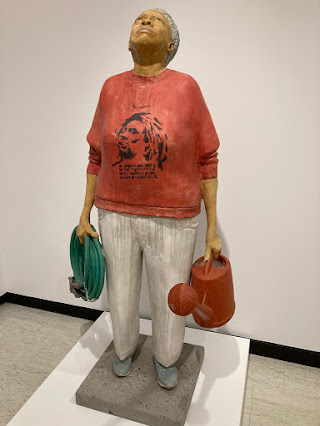 John Ahern at The Memorial Art Gallery
Once I step away from Rand's artwork and I come out into the next gallery I find a sculpture by my friend John Ahern - it is of a woman looking skyward, patiently waiting there with her hose and watering can.  This  art  features a figure cast in plaster representing a  " real person".  We get away from that feeling found in Archie Rand's paintings that are sort of funny in that they look like 1950s cartoon strips. 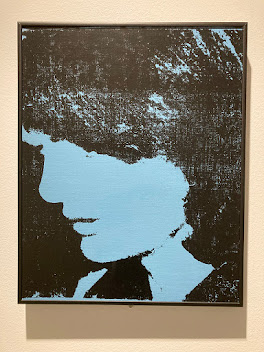 Jackie Kennedy by Andy Warhol
Art can move you, and it also can bring you very much back to an enhanced reality.  We can see that for certain in the grave way Andy Warhol treats with respect the image of Jackie Kennedy mourning the passage of her husband, the President.  For me the Warhol has the kind of impact I miss with Archie Rand, though I do admit that Rand can be engaging and entertaining!