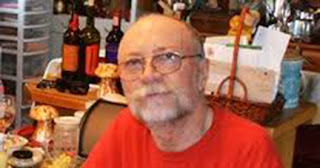 Artist and Printmaker:  Keith Howard ( 1950-2015 )
At this stage of my life, I am grateful for those individuals who have made a deep impression on me as an artist and as a friend, and it is in this manner that I honor Keith Howard.  Looking back, Keith had an impact on me and our printmaking community and his influence is felt by many to this day.  His most relevant efforts to support Non-Toxic Printmaking and to bring his knowledge and expertise to Rochester is a story to be told, and it is something one will never forget. 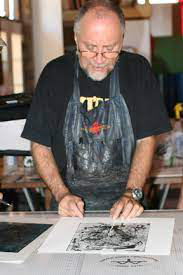 Keith Howard at work in his apron
How did this come about?  Years before I actually met Keith, I was getting his mailings about the workshops he held at his home turf then in Grand Prairie, up in Alberta, Canada.  I decided to take his summer class and it changed my life - and I guess that decision changed his life too - but we would not know this at that time in 1995.
By the mid 1990s I was teaching at Rochester Institute of Technology and taking night classes there to get up to speed with the latest digital technology.  I was making prints the old-fashioned way with etching plates and acid.  In the printmaking studio at R.I.T. I would leave at the end of an evening with a headache, even though I made some nice color etchings.  There had to be a better way!  I got on a plane one summer and found my way to Grand Prairie - up near the border with Alaska. 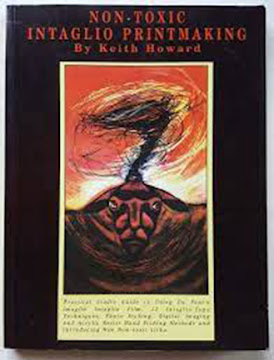 Keith Howard's book on Non-Toxic Printmaking
Keith Howard had published his first book about Non-Toxic Printmaking and it sent shock waves through the print community - slowly but surely.  It is hard to shake up this sector of the art making world, especially because the techniques artists use to make etchings and lithography are centuries old!
A couple of years after I took his summer workshop, I asked Keith if he would like to come to Rochester to give a guest lecture and after we did that R.I.T. then asked him if he would like to have a position  teaching here in the States.  His answer was positively yes, but this then tore his family apart!
Keith actually came to live with us in our home on Elmwood Avenue as he adjusted to life in the States.
Keith set up his school for Non-Toxic Printmaking at R.I.T. and started a new chapter in his life.

Keith Howard  lays out his work for us in the studio at R.I.T.
Keith travelled widely to promote his techniques, and the work he made also gradually changed although for many years it was based on photographs he would make.  Keith eventually remarried and they set up their own home in Rochester but he continued to travel and expand the reach of his research.  At some point he also had the thought to translate his visual ideas into paintings, and thus began an unusual chapter in the work of this  ground-breaking printmaker. 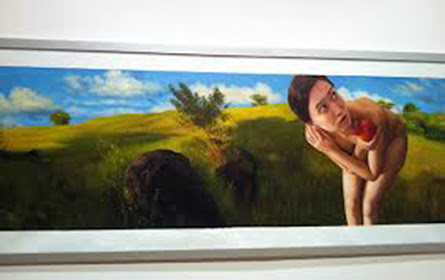 Keith Howard's images at Axom Gallery in Rochester, New York
Keith would bring his model Michelle out on location and make panoramic photos which would then be translated into paintings.  Keith would team up with a  gifted painter in China who would take the composition through the steps of making a carefully constructed  verbatim painting of the image.
Keith would unroll the work in our living room and we would all find the artwork remarkable!  What a surprise!
Now it is more than five years since Keith suddenly passed away, and we all miss his ground breaking vision, his humor, and his expertise!  May he rest in peace!