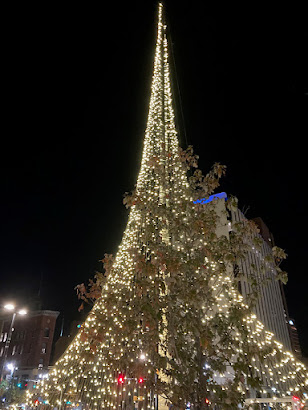 Liberty Pole Plaza is in the center of Rochester, New York
RIT City Art Space is nearby at 280 East Main Street
presenting
"Jubilee"
Art by Luvon Sheppard
Luvon Sheppard presents his solo exhibition called: "Jubilee" at the RIT City Art Space from early November through December 19th, 2021 and like a magnet I was attracted to the show by the great good spirits of the man and his art. Luvon has now been teaching at R.I.T. for FIFTY YEARS!  If you know Luvon - then you know he is the real deal, and if you haven't yet met the man - go see his show - it is by the Liberty Pole Plaza and hear his gallery talk at 6 pm on Friday, November 12th. 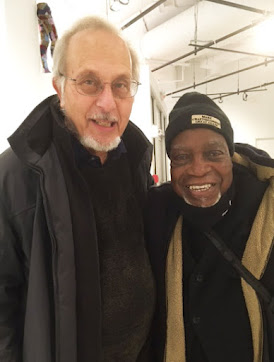 Alan Singer at left and Luvon Sheppard at right
Luvon and I have known each other for years - and when I first came to work at R.I.T. here in Rochester it was late in 1988 and I was given office space with Luvon - so we have shared a lot since I first arrived.  Luvon brings a sunny disposition to our conversations and perhaps that comes from the fact that he was born in Florida and as a child he moved to Rochester when he was five with his family. 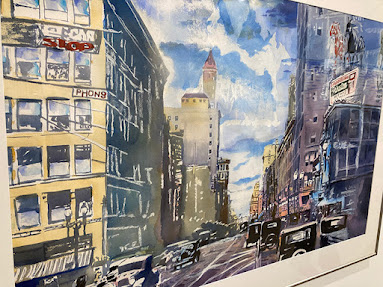 " Rochester 1940" by Luvon Sheppard, watercolor
At R.I.T. once a week, Luvon and I would sit and have lunch to share ideas and go over a bit of our own history.  I had applied to teach at this university because of its reputation and moving up from New York City where things had been badly shaken by an economic recession and my jobs as a free-lance illustrator had been put on hold,  now I had a new job and a new home.
Meanwhile, Luvon had taught in the Memorial Art Gallery; he was deeply involved in this community and as an educator and visionary who started a workshop called All Of Us, he had already inspired many students to share their love of art and practice with a sense of a higher purpose. 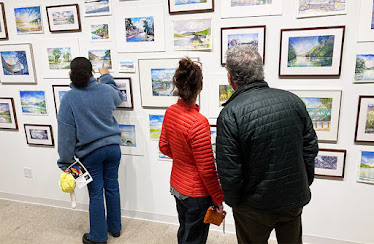 Admire the watercolors by Luvon Sheppard
At the RIT City Art Space there is room to breathe and you can feel peaceful looking over Luvon's watercolors where he has freedom with the medium and I have watched him give demonstrations of his technique which has evolved over the years that we have known each other.  Luvon has also been a printmaker but lately he is trying a new approach to his art. 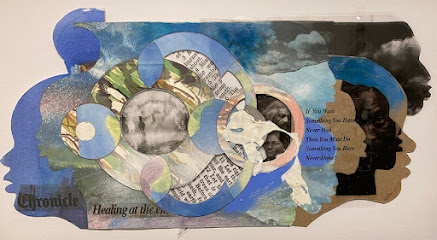 Luvon Sheppard has a quote to consider in his new collage...
In Luvon's new collages there is a mix of photos and cut paper, and every now and then there is a bit of text to consider like this quote: "If You Want Something You Never Had, Then You Must Do Something You Have Never Done".   Like looking through a pair of binoculars we find a portrait of Frederick Douglass and profiles of faces from the neighborhood.  At the show there are also some of Luvon's new sculptures and I am not surprised that at this stage he is reaching out in new directions as experimentation comes with his experience. 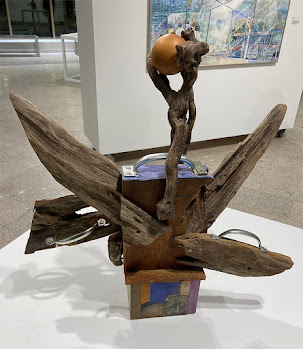 Luvon uses found objects and more....
I enjoyed chatting with Luvon and his wife as gallery goers came into the opening  and there is some sense that maybe we are getting back to normal after this long period of being anxious about the pandemic.
At the show Luvon celebrates Rochester with a large watercolor he calls "Rochester 1940".  The wall label describes 1940 as important to him because that was the year that he was born!  So there are many reasons that Rochester should celebrate Luvon and his work, because he is the heart and soul of this city.  He also operates an art gallery now on Main Street called the Joy Gallery and we really get to view a diverse range of art and photography there that is representative of the culture we now can partake. 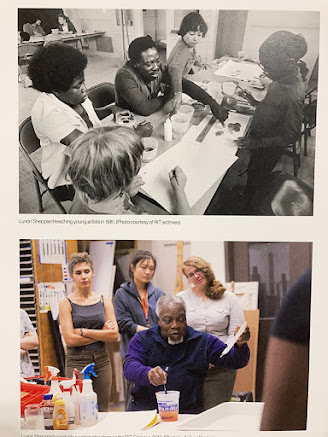 Luvon is a natural born teacher and he has been a great asset for our community!
From my perspective Luvon has brought his many gifts to the party; he has a natural gift to search for and find real value in his life and his art - certainly in the making and the doing.  His exhibition is an inspiration for. us all to behold.  Check it OUT!