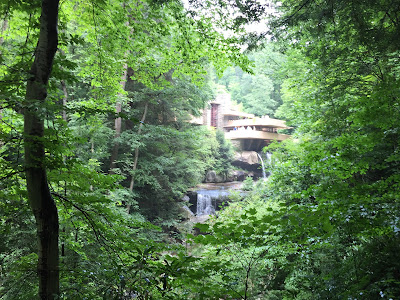 Fallingwater
by Frank Lloyd Wright
in the Laurel Highlands of Pennsylvania

Rhododendrons were dripping with moisture as we rounded the bend toward the visitor center in Mill Run, Pennsylvania.  We were going to see the Frank Lloyd Wright house known round the world as Fallingwater.  Under our umbrellas as we walk up the gravel driveway, we hope for some sunshine to dry us out as we wait for our tour to start.  It is a slow day and there will only be about 70 groups of about a dozen people going into the house today; we are tour number 15.  While we wait, I look over an exhibition of gifts that the Kaufmann family ( who commissioned the Frank Lloyd Wright design ) had received and read about their history.  The Kaufmann family owned department stores and in fact one of them was in Rochester when we first moved here from New York City.

We will be walking through a structure cantilevered over a waterfall in the Laurel Highlands, a rolling hill country southeast of Pittsburgh.  You wouldn't expect the world's most famous 20th century house to have been built during the Great Depression, but that is what we have before us.  Making a pilgrimage to Fallingwater should be on everyone's bucket list, because it really is that good. 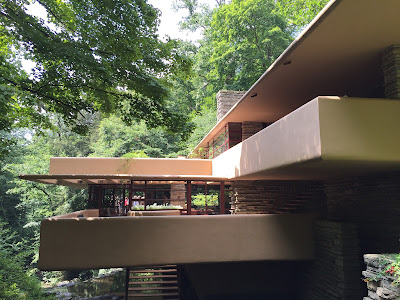 Coming into view is the house and the way it reflects the local geology and this is part of the charm of the building, and also part of the philosophy in the mind of the architect, Frank Lloyd Wright.  Trying to be harmonious with the natural setting, and gathering visual strength from the layers and rocky ledges that this house nestles among, really has a startling effect. 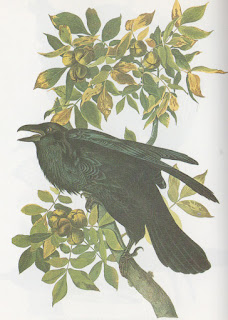 Before I even noticed the terrific details of the interior architecture, I was greeted by a familiar image - an Audubon print I grew up with of The Raven, hanging in the vestibule as we walked up and into the house.  I was told by the tour guide that part of the estate included a bird sanctuary, and it was now all under the care and supervision of the Western Pennsylvania Conservancy.

The ceilings are rather low in the house and this intensifies the horizontal expanse of each floor, and terrace.  The rooms have built in furniture which adds warmth as does the color scheme of Cherokee Red highlights and a light Naples Yellow for the major concrete structure.  A corner window of six stacked increments amazes me when it is opened and you realize that the structure is unique - everything is custom built and requires a lot of care.  Also surprising, was to find a copy of my father's book, "Birds of the World " under a statue of a Madonna in the Master Bedroom. 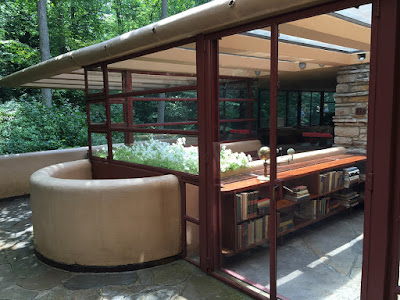 In places where art can be hung, there are famous Japanese prints by Hiroshige, and also works by Picasso.  Another surprise for me was to find a sculpture by Joseph Goto on one of the terraces ( I had met him once or twice before his death in 1994 ).  His brother Byron was a friend of the family.  Among the crafts in the house were South American, and American Indian pottery, and paintings by Victor Hammer, William Huggins, and Sideo Frombolutti.

Almost miraculous is the cooling effect of the moving water from below the house.  A breeze comes up the steps and into the room, and the sounds of splashing water can be heard.  The site of this house took a while to find, and the Kaufmann family who owned the house took great care in preserving its appearance.  Today you treat the property as you would a work of art in a museum.  While the tour was in progress we could not take any photos but after the tour was over I managed to take a few quick images before we returned to our car in the parking lot.

Make it your business to go and see this marvel, you will be glad that you did!