Round Up, My Grand Tour, Part Six 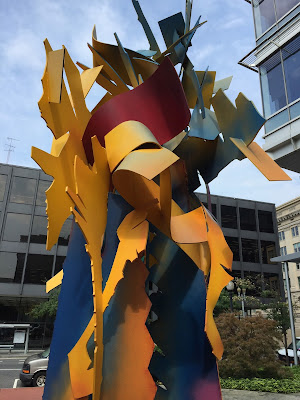 Across the street from The Smithsonian American Museum of Art I saw large scale sculpture by Albert Paley, but I had a difficult time finding a name plate or any description of the piece, until I went online to identify it.  On another corner I found an equally large work by Roy Lichtenstein, from his series of art deco heads.  Both sculptures have character and command attention. 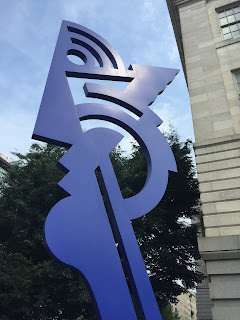 After viewing the exhibition of Yasuo Kuniyoshi, I went down the hall for a little look at the collection of American art, which includes a large room of folk art featuring a prominent installation titled: " The Throne of the Third Heaven of the Nation's Millennium General Assembly" by James Hampton.  The work took him nearly fourteen years to assemble in his garage and it highlights his attempt to express his faith and determination through furniture and other objects covered in foil and augmented with lightbulbs all of which signify his deep religious ideals. 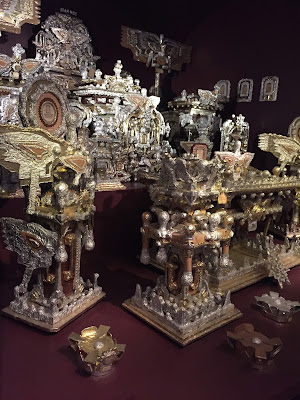 Installation by James Hampton
at The Smithsonian American Museum of Art

The differentiation of folk art from mainstream contemporary art has become tenuous.  The high regard we hold for installations today in galleries and museums by artists like James Hampton seems to incorporate ideals that are associated with fine folk art and a kind of obsessive focus on aspects that bring it close to high baroque.

On my way back to Baltimore, I made it my business to stop and see The Walters Collection in the Walters Art Museum which was just downstairs from my hotel - how convenient was that!  Even though I had been in Baltimore a few times, this was a well kept secret, and so early one day I walked in and I was so surprised!  The Walters Collection was started in the late 1800's by William Walters and his son, Henry who had built a fortune in the distillery business.  They amassed a collection that looks like a miniature Metropolitan Museum of Art - an encyclopedia of works that bring the world's cultures into focus from armor, to paintings, from stain glass to portraiture. 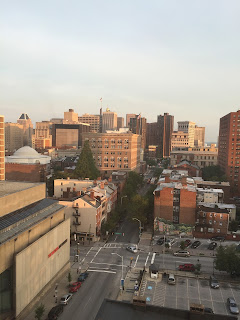 From my hotel I could see the Walters Art Museum
lower left corner, Baltimore, MD

Upstairs  at the Walters Collection I found an interesting assortment of French paintings including a wonderful Dominique Ingres Odalisque and a version of Oedipus and the Sphinx.  This is a kind of classical figuration that I grew up with when I was an art student years ago, but I still am interested in this even though my artwork is light-years away.  Great painting holds my attention, and Ingres is terrific here. 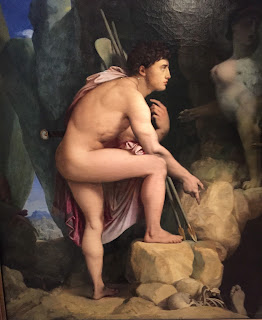 Dominique Ingres
Early version of Oedipus and the Sphinx
at the Walters Art Museum
Baltimore, MD

An interesting facet of The Walters Art Museum ( aside from the fact that entrance to the museum is free ) is that they have a window on a room where there is a conservator at work restoring old paintings and other artifacts.  You get to see the tools of the trade and that is part of their educational mission. 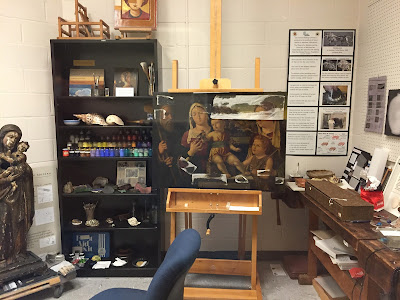 The Walters Art Museum includes some of the grand volumes that were part of their book collection and it seems that there is also a large amount space set aside for Italian painting,
and for the Islamic arts and even a sampling of Asian art. 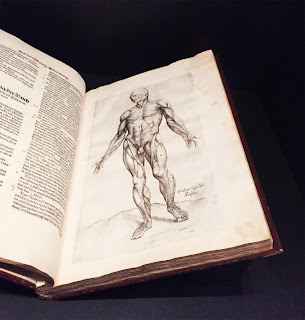 An illustrated book on anatomy in the Walters Collection

At the moment I am reading Sue Roe's new book on Montmartre, so I was right in tune with a wonderful little Manet painting that portrays a bit of Parisian cafe life.  Quickly painted ( or at least that is the impression it gives ) we get a whole bit of culture in just a few square inches of canvas, another wonderful find at The Walters Art Museum. 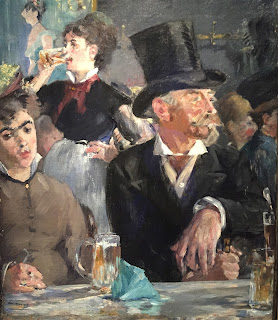 On the way back to Rochester, we took a detour through West Virginia, and made a stop at Milton, to watch the glass blowers at work in the Blenko plant.  They have been in business making glass containers, and such since 1893.  This was a good opportunity to slow down and watch the artisans at work - and their timing was just like choreography.  The teams knew what they had to do, they were well practiced, and it was educational as well as entertaining. 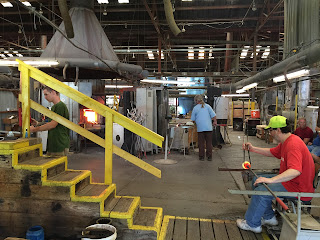 Glass Blowers at work making mold made containers
in Milton, West Virginia
Posted by Alan Singer at 11:52 AM