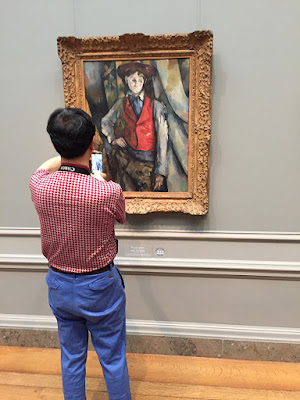 The National Gallery is a cool spot in a Capitol way.  I duck in for a few minutes on a hot summer to soak up some art, and I have to sit for a second - this being a hazy humid day - and the place is ripe with tourists, and nobody stops to look at the paintings anymore, they just pause long enough to click their smart phones and move onto the next one.  Can you imagine going half-way around the world for a museum experience and then not look at the art but only at your iPhone?  There is something wrong with this equation!  This does not bode well for the art or the artists.  Can we not slow down long enough to take a long or meaningful look at the art that is presented to us? 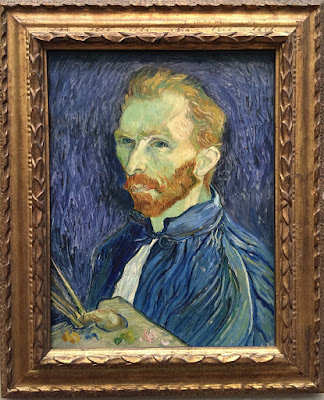 Enough complaints, I went to the National Gallery to reconnect because I have been working on the computer too long and I forget what the touch is about, I need to see it and feel it.  As for the Cezanne, that young man in the red vest is one of my favorites in this collection of stars.  Van Gogh stares out at the viewer in constant concern for the little details.  The fine red edges of oil paint round the lids of eyes look at me from 125 years ago, like there is no tomorrow.  Did I mention that I spent the last few months reading Van Gogh's letters, and boy was that worth it - now I know why his paintings look the way they do! 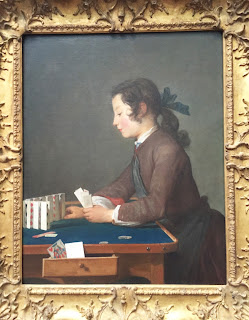 J. B. Chardin, oil on canvas

Down the hall I go back in time to Chardin and gaze fondly at his young man playing a card game, his alphabet lesson, his still life, and so much more.  Chardin is endlessly rewarding, to notice the humility with which he paints women in their kitchens.  Chardin makes the commonplace look noble.  This is the magic trick that he plays, and a lot of this has to do with scale, and the interactions we have with his compositions. 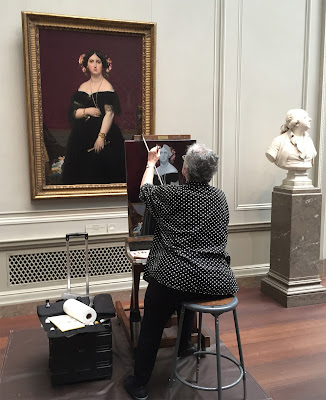 Madame Moitessier looks out from her portrait as calm as you can be when you have been hanging on the wall all these many years.  She has seen it all, but now we have someone who really is looking at the painting that Ingres made so many years ago.  The copy is being made the old-fashioned way, with a value study in greys underneath, and the mixed colors on a layer on top.  When it is all done a varnish will top it off and look great into the next century.

In the American art section the viewers have to be grateful to John Wilmerding who has made some promised gifts to the museum on view now.  Among my favorites are the painters Fitz Henry Lane ( formerly Fitz Hugh Lane ) and J. F. Peto.  When I look at Peto, he is not too far from the work of Chardin, except now the articles he portrays are a bit shabby, beaten down even.  A pile of old books begs to be disposed of. 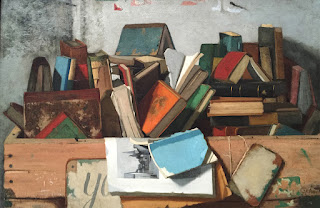 Fitz Henry Lane takes you Down East to the coast of Massachusetts and on into Maine.  His little jewel of a painting called "Braces Rock" is an exercise in clarity, and a calm vision, and he belongs with a group you can call the "Luminists".  I feel better already! 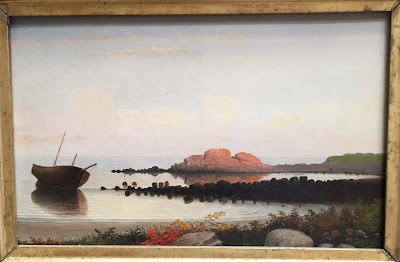